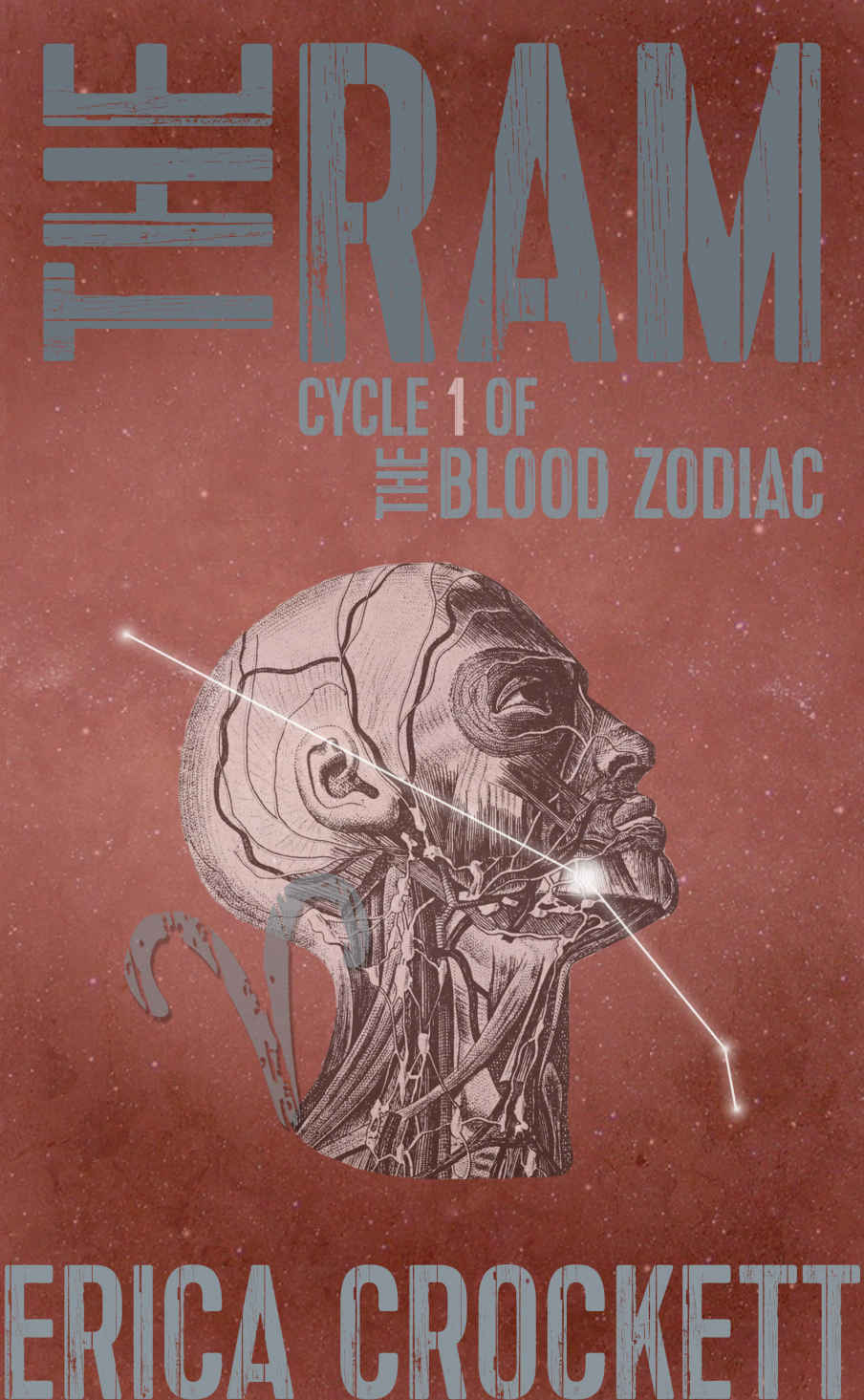 Praise For
The Blood Zodiac
Series

"Erica Crockett burst onto the literary scene in 2014 with her debut psychological suspense novel,
Chemicals
. Now she is quick to follow up with an episodic serial tour de force worthy of
True Crime
, proving she is also on her way to establishing herself as a master of the thriller genre. It's hard to believe that such an accomplished talent is only just getting started."

-
Vincent Zandri, New York Times and USA Today Bestselling author of
The Remains
and
Everything Burns

"
The Ram
is one of those books that will have you skipping meals to find out what happens next.  It’s an expertly plotted and addictive character-driven work of art. Take notice, people...Erica Crockett has arrived!"

"Riley and Peach are running the show.  Our experience is in their hands, and their desires, insecurities, short-comings, and violent lust. With time we realize a larger force is at work, thrusting Riley and Peach against one another.  I have the sense that Ms. Crockett is being used in the same way to channel a myth much bigger than herself. The story is telling itself through her, propelling her words deliberately towards a destined and inevitable outcome.” 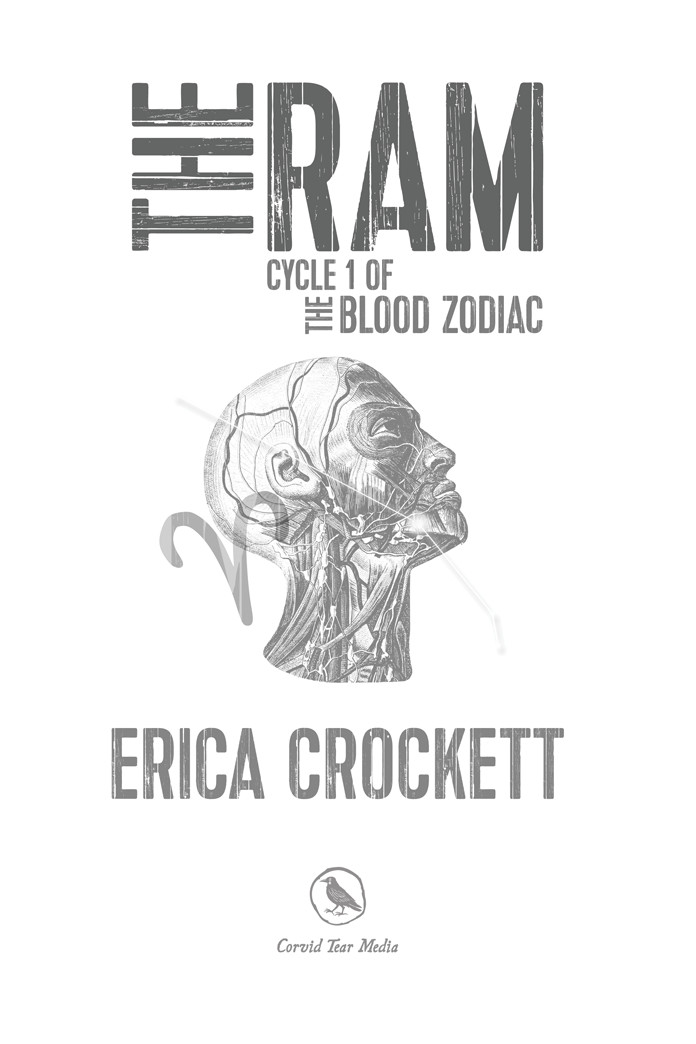 This book is a work of fiction. Any references to historical events, real people, or real places are used fictitiously. Other names, characters, places, and events are products of the author’s imagination, and any resemblance to actual events or places or persons, living or dead, is entirely coincidental. 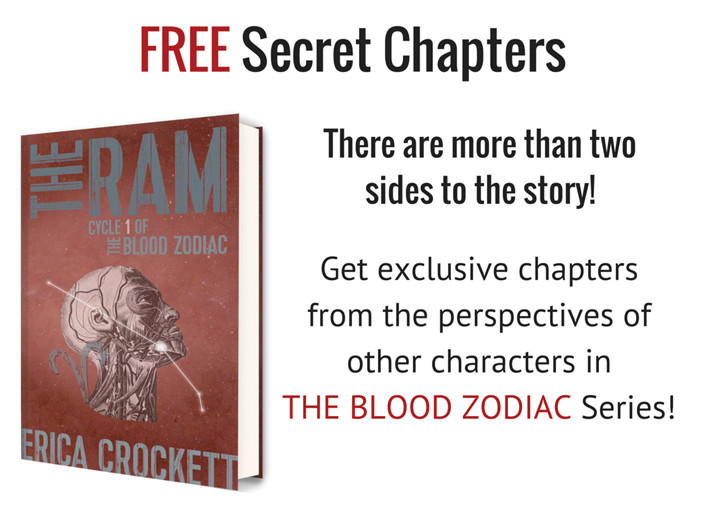 Sign up for the author’s New Releases mailing list and get
FREE
secret chapters each time a new book in
The Blood Zodiac
series is released!

All the fight has left him.

Riley believed before, when life seemed to always take his side no matter his dubious choices and rough spells, that he’d be a solid contender for making it from birth to death with minimal tears in his body and his spirit. But a few years ago, life soured on him, and he couldn’t get his sweetheart back. No matter how he wooed her. That former paramour, she was a fickle bitch. Just like most mortal women. Except life was the only lover with longevity, staying power, the only one he’d been in a relationship with all these years. But now, Riley felt as though life was keen on seeing him buried and gone at an early age.

“Go ahead and check the chains again,” Double Al shouts at Riley. His boss reminds him of a bear standing on hind legs, thick with rings of both muscle and fat. The man’s notable features are the tight white and black curls cut close to his scalp and lips the size of Riley’s thumbs held tightly together. He has a fondness for candy and for Riley, whom he’s known for decades, and this is how Riley finds himself running his fingers around the cool iron of an anvil. Double Al, the man whose nickname was derived from a word play on his girth and double-wide trailers, nods to the London Anvil cradled in a cross of linking metal chains and then lays a hand on the anvil horn. The unyielding tine is several shades darker than the skin of Double Al, the owner of High Desert Trommel.

“Check this,” Riley says under his breath and grabs his crotch. He does it not because he means insult, but because he wants to show his boss his own thoughts on manhood and that he, too, can play the game.

His boss hears the quip and smirks. “Don’t have my reading glasses around my neck, son. Afraid I can’t get close enough to see it.”

Those others who catch the exchange laugh, their hands busy hammering out sides of trommel cylinders or plunging red, runny metal into dark, cold water. Riley is accustomed to being mocked in front of his coworkers. They are men who did not have a track scholarship to Stanford or know the difference between a pleat and pin tuck. He goes along with it now, the crotch grab a new habit, realizing after a few rough weeks at the beginning of his job, that if he put up a fight, they’d only kick him down harder. He couldn’t stand apart from them. Riley learned he’d have to meld, to blend. In order for the shop to run smoothly, they’d need to be steel; Riley decided to be the carbon mixed to their iron. He’d be the element of all life.

Riley stoops to feel the links around the two hundred pound anvil. He doesn’t blame his coworkers for ribbing him. He rarely did chores as a child and the only physically taxing job he’d had was when he was a teenager working on a landscaping crew. At his current age of thirty-one, heavy breathing only happened during jogging and sex. To go from practicing contract law to working in a metal fabrication shop rolling out trommels used in gold mining was a bizarre transformation his blue-collar coworkers would not let Riley forget.

He was not one of them, though he wore the same tan work overalls smudged with grease and the heavy-toed work boots. But with what had happened to him recently, life landing a sucker-punch to his solar plexus, he was growing comfortable in his new vocation. He couldn’t even pretend his acquiescence to his current state was for show or ambition, that he was actually the proverbial wolf in sheep’s clothing. Because Riley felt his teeth were dull and worn, his hide a mess of mange and the sheep, in numbers, could easily trample him to death.

“They’re all solid,” he shouts from where he crouches. Someone has turned on a circular saw and the warm air of the machine shop becomes fragrant with the shavings of pine. He’s run his hands over most of the links, unable to get his fingers around the chain underneath the anvil. He assumes it’ll hold. It always has.

Newt Parnwell, partial to NASCAR, gun shows and ballroom dancing competitions, heaves on a chain running up and over a pulley suspended from the ceiling and down to the chains wrapped around the anvil. The anvil with its black horn lifts up on one side and Riley thinks of a rhinoceros at full gallop before noticing the chains aren’t balancing the anvil’s weight. He needs to reorient the fetters so the metal lifts off the floor in one fluid motion.

“Hold up,” he says and shoots his hand up in the air. But someone else has turned on the hood vent at the other end of the workshop, the circular saw still sings, and Newt continues to heave the anvil upward, tugging on sections of chain with fists wrapped in kidskin gloves.

Riley swears to himself, pops up off the floor and waves both arms at the man with the bulging eyes of an ill-bred Shih Tzu. But now the man is focused on watching the pulley overhead as it squeaks with the rubbing of metal against metal. The anvil, bigger than Riley’s chest, is hauled up to his eye level and it pitches dangerously to its left side.

“Hey, you stupid son of a bitch,” he yells at the man, whom finally looks at Riley. He shrugs his shoulders and Riley motions for him to stop pulling the piece of metal any higher.

He doesn’t hear the snapping sound, not with the clanging of mallets, the fan, the hum of the circular saw drowning out the slightest sound of metal warping under too much pressure. Riley doesn’t get a chance to move before he sees the anvil slide neatly from its hammock of chains.

It comes to rest on its face, where bits of metal have been beaten flat time and again. He looks to the anvil, trying to reason how the pitch of the thing could see it end up upside down. He uses his analytical mind to distract himself from the sensation of pain. Because Riley’s left foot is underneath the slab of iron, the front of his boot hidden from sight by the mass of metal.

That thought he had weeks ago, about being the carbon to their iron to create steel, now he feels it. Carbon may be the stuff of living beings, but iron is wickedly dense, stolid and without life. It is not subject to the mistress of life. So it is prone to winning. The pain in his foot opens up, like the crack of pinecones to the warmth of late spring and he sucks in air through his nose to snatch up the smell of pine, to keep himself from crying out.

Riley lies back on the concrete floor and watches the chains sway overhead, a solitary link bent and open, jangling and dancing, apart from all the rest.

It’s wet and windy outside, galling attributes of a Boise spring which promises to linger on well into June. Peach hates the cold the most. She dealt with the gray days of January and February but became disheartened when the cream and orange-colored daffodils along her front walk wilted after a day of blooming, petals browned by a biting frost in mid-March. At least the robins trilled in the copses of dogwood and birches around her apartment. They were never solitary, moving in great masses of gray punctuated with flashes of tomato-red from their bellies. They took over her neighborhood, situated on the central bench of Boise, a geological shelf rising up to the south of downtown proper. The harbingers of spring shat on cars and left dried bits of juniper berries on the concrete patio outside her door. Peach had no idea what a giant flock of robins would be called, so when they arrived in droves in late February, she borrowed another moniker and named them a murder of robins.