Read The Perplexing Theft of the Jewel in the Crown Online

The Perplexing Theft of the Jewel in the Crown 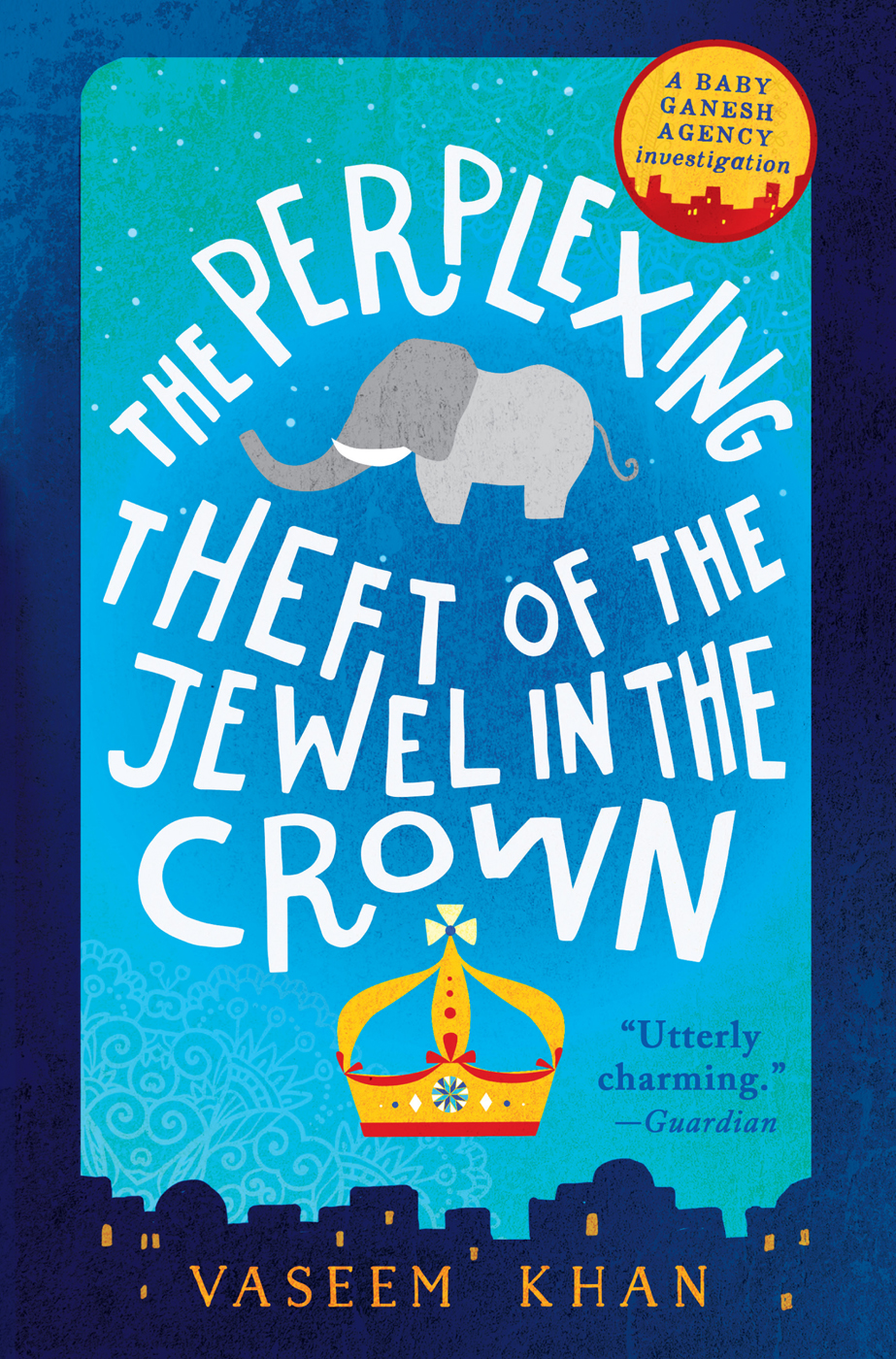 A Preview of
Murder at the House of Rooster Happiness

The scanning, uploading, and distribution of this book without permission is a theft of the author's intellectual property. If you would like permission to use material from the book (other than for review purposes), please contact [email protected] Thank you for your support of the author's rights.

This book is dedicated to my nephews and nieces. To Safiya, Aiza, Owais, Zayan, Faris, Zakaria and Aadam; and to the team in India, Arjun, Nupur and Aman. If everyone loved animals as much as children do, wouldn't it be a better world?

A TRIP TO SEE A DIAMOND

As the gleaming blade touched gently down upon his shoulder, Inspector Ashwin Chopra (Retd) found himself overcome by a jumble of conflicting emotions. Pride, undoubtedly, at this supreme moment in his life. But with pride came a boundless sense of humility. That he, the son of a schoolmaster from a poor village in the state of Maharashtra, India, could be thus honoured seemed altogether improbable.

After all, what had he really achieved?

He was an honest man who had worn the uniform of the Brihanmumbai Police with an unblemished record for over thirty years â before a traitorous heart had forced him into early retirement â and in the India of today that was something to be proud of indeed.

And yet was integrity enough of a virtue to warrant such an accolade?

Surely there were more deserving candidatesâ¦

What about his old friend Assistant Commissioner of Police Ajit Shinde, who even now was fighting Naxalite bandits in far-off Gadchiroli and had already lost the tip of his right ear to a sniper's bullet? Or Inspector Gopi Moolchand, who had lost a great deal more when he had selflessly dived into Vihar Lake on the outskirts of Mumbai to rescue a stricken drunk and been attacked by not one but three opportunistic crocodiles?

Chopra was overcome by a sudden sense of pathos, as if this singular occasion marked a peak in his life from which there could now only be a perilous and unwelcome descent.

He stumbled to his feet from the knighting stool and cast around at the circle of gathered luminaries in search of Poppy.

He frowned. How did Ganesha get here? Or, for that matter, Rangwalla? And did they
really
allow elephants inside Buckingham Palace?

Chopra turned back to the supreme monarch.

For the first time, he realised that she bore an uncanny resemblance to his mother-in-law, the widow Poornima Devi, right down to the black eye-patch and expression of intense dislike that Poppy's mother had reserved for him ever since she had first set eyes on him all those years ago.

Chopra swam back to consciousness with the insistent ringing of the alarm threatening to shatter his eardrums.

He lifted his head dazedly from a carpeted floor and looked around in thorough disorientation. Confused images bobbed before him: a shattered glass display case; the recumbent bodies of numerous well-dressed men and women; bright lights reflecting off dazzling jewelleryâ¦

Before he could register anything else there was a flurry of movement as a horde of men in black military fatigues poured into the room.

He was hauled unceremoniously to his feet by brusque hands and then frogmarched out of the red-carpeted chamber, down two flights of marbled stairs and out through a fortified doorway into late-afternoon sunlight.

Someone pushed a glass of water into his hands; someone else wafted smelling salts under his nose, jerking him back to alertness. A stern-looking woman shone a penlight into his eyes, then asked him how he was feeling.

Chopra blinked rapidly. He was groggy, his memory slow to return.

He was sitting on a manicured lawn in front of the Prince of Wales Museum in Fort. He recalled, with a sudden rush, that he was there to visit the Grand Exhibition of the Crown Jewels of the United Kingdom. This thought instantly brought with it another: Poppy!

His wife had been with him in the jewel room. He looked around wildly for her.

He saw her standing on the grass just yards away, haranguing a matronly woman in a black uniform.

Chopra scrabbled to his feet and jogged over to his wife, who turned to fling herself at him when she spotted him approaching. âAre you OK?' she asked, concern in her eyes.

âYes,' he replied, raising his voice to be heard above the museum's alarm, which continued to ring out over the lawn. âYou?'

Around them, black-uniformed guards were running in orderly fashion to blockade the entrances and exits to the museum. Other guards were quickly and efficiently rounding up all those present in the grounds.

On the lawn beside Chopra, his fellow visitors from the room in which he had awoken were being tended to.

And suddenly, with the clarity of a shaft of sunlight spearing a darkened room, Chopra understood what was happening. He recalled what he had seen when he had come to: the broken display case, the recumbent bodies. He believed he had a very good idea of what was going on.

Someone had attempted to steal the Crown Jewels.

Thirty minutes later Chopra and his fellow visitors were marched to the museum's swanky Visitors' Centre and told to wait in a back room. Armed guards were placed at the door to a wail of protests. They were informed, in no uncertain terms, that no one was permitted to leave. Someone would be along to question them soon.

There was nothing to do but wait.

It was another three hours before Chopra was taken to a small, brightly lit room to be interrogated by a man named Deodar Jha, who introduced himself as the commander of Mumbai's Force One Unit. The elite unit was a special anti-terrorist squad set up amidst a blaze of publicity following the 2008 Mumbai terror attacks. Since then the commandos had spent their days sitting in their Goregaon HQ idly polishing the M4 assault rifles they were wielding so impressively today.

Chopra knew that the Force One Unit had been employed to safeguard the Crown Jewels during the exhibition at the Prince of Wales Museum.

It seemed that they had failed.

Jha was a big, round-faced man with an aggressive moustache. He had an arrogant demeanour and the manner of a bully. Chopra, veteran of countless such interviews that he had himself conducted, responded to the commander's questions precisely and accurately. He knew that the faster Jha got his answers, the faster they could all leave. Behind Jha's sweating anger he sensed a growing desperation. Perhaps it was already hitting home that whatever had transpired at the museum would surely cost him his career.

There was a mystery here that would take more than the brute force methods of Force One to solve, Chopra suspected.

What
had
happened? Chopra tried to concentrate on everything that had occurred that day. As he did so he felt the automatic whirr of memory taking him back, back to the beginningâ¦

âWe're going to be late.'

Inspector Chopra (Retd) glanced at his wife, Archana â known to all as Poppy â from behind the wheel of his Tata van as she fidgeted in the passenger seat.

Chopra loved his wife dearly, but at this precise instant he was struggling to recall why.

It had been upon Poppy's insistence that they were here now, on their way to the Prince of Wales Museum. Chopra had known that traffic at this hour would be horrendous, but Poppy had been hounding him for days, ever since the exhibition had arrived in Mumbai two weeks earlier, a full ten days before Her Majesty, the Queen made her historic visit to the city.

It was the first time that the Queen had ever visited Mumbai, the first time in two decades that she had set foot on Indian soil. The newspapers had been full of little else.

Poppy, like most in the city, had quickly succumbed to the âroyal malaria', as it had been dubbed. Chopra, however, had remained aloof.

As a closet Anglophile he was secretly delighted that the Queen had chosen to visit Mumbai. But Chopra was a sober and rational man. From his father â the late Shree Premkumar Chopra â he had inherited both an admiration for the British and the progress they had brought to the subcontinent, and a healthy perspective on all that the Raj had taken from Indians. He did not see the need to gush just because Her Majesty had come calling.

Naturally, Poppy did not agree.

All her friends had already been to see the exhibit, she had complained. They talked of nothing else.

Chopra's eventual surrender was inevitable. He had rarely refused his wife anything in the twenty-four years of their marriage. Poppy was a force of nature, flighty, romantic and a devil when aroused. It was far easier to acquiesce to her occasional whims than to act the curmudgeon. And besides, he knew that in the perennial war between the sexes it behoved a husband to surrender the occasional battle.

The trick was picking the right battles to lose.

He glanced again at his wife.

A slavish follower of fashion, Poppy had styled her long, dark hair into a beehive, which seemed to be all the rage following the release of a new Bollywood movie set in the sixties. Her cheeks glowed with rouge and her slender figure was encased in a bottle-green silk sari with gold-flecked trim.

Chopra himself was dressed in his best â and only â suit, a dark affair that his wife complained made him look like an undertaker. But he had not seen the need to purchase a new suit for a simple visit to the museum. The suit had served him well for the past fifteen years; it would serve him well for a few more.

As a concession he had made an effort with the remainder of his appearance. His thick black hair â greying at the temples â was neatly combed and his brisk moustache was immaculate. His deep brown eyes sat above a Roman nose. Nothing could be done about the frown lines, however, that had recently taken up residence on his walnut-brown forehead.

Supressing a sigh, Chopra looked back out at the Horniman Circle in south Mumbai where a hapless constable was attempting to herd the gridlocked panorama of cars, trucks, motorbikes, bicycles, rickshaws, handcarts, pedestrians and stray animals.

Revocation (The Canyon Wolves) by Fields, Laura
The Science of Herself by Karen Joy Fowler
Lila's Wolf (Out of Time Book 1) by Sofia Grey
The Hill by Ray Rigby
44 by Jools Sinclair
Chronicles of the Dragon Pirate by David Talon
Destiny of Coins by Aiden James
Dead Men (and Women) Walking by Anthology
Trouble in Paradise by Robin Lee Hatcher
Down By The Water by Cruise, Anna