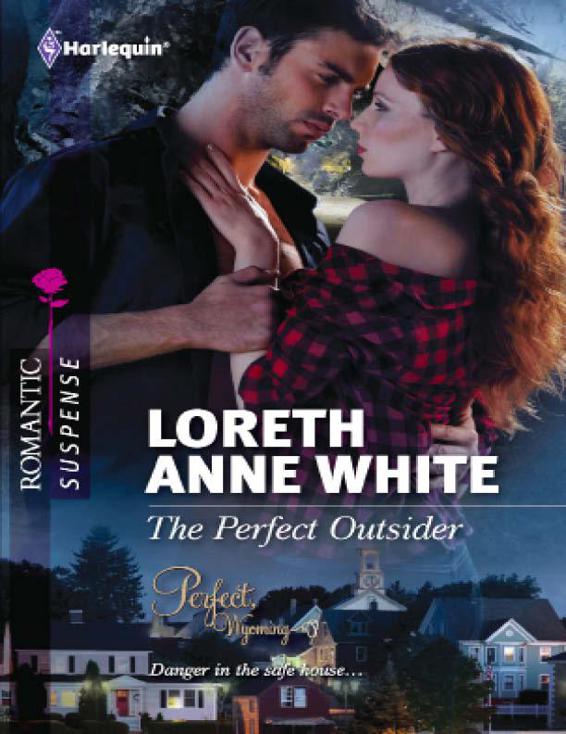 “Please help me figure out who I am.”

How can she leave him to die? June Farrow works for Cold Plains Search and Rescue as cover for her real mission—helping Devotees escape from Samuel Grayson’s evil cult. The rugged man she finds in the woods has no memory, but evidence points to his being one of Grayson’s murderous enforcers. Hardwired to save lives, June’s only option is to take him to the safe house.

“Jesse” is the name on his belt buckle—that’s about the only thing he knows. Now he’s being held prisoner by a beautiful stranger. The fierce attraction between them threatens to awaken details from his past. But how can he even trust himself when he might destroy those he’s trying to protect?

She glanced at Jesse, and knew instantly he was talking about the kiss. Her pulse quickened and her mouth felt dry.

“It’s me who should be apologizing,” June said. “For locking you up. But I had to be sure that you weren’t the mole who’d brought the henchmen so close last night.”

June looked up at him and her heart kicked.

“You’re the reason they came looking, Jesse. Samuel is after your blood. I’m really sorry I locked you up.”

Jesse’s gaze went to the door.

He took a step toward her. June’s knees felt weak.

“June, I am sorry, about the kiss”

“I’m not,” she said, very quietly, her cheeks warming.

I love stories about second chances. We all make mistakes. Sometimes the results of those mistakes can be devastating, leaving us trapped by feelings of guilt that dog us through the remainder of our lives.

But what if, as in a fairy tale, a wand could be waved and a wish granted that enabled us to forget, just for a while, the guilt and pain that traps us in the past and stops us from truly living and moving forward into the future?

In romance, amnesia is often the magic wand that grants our characters that second chance. This is what happens to my hero in
The Perfect Outsider
when an accident temporarily steals his memory. But when my heroine, a rescuer at heart, tries to save him, it’s he who saves her instead. By being forced to live solely in the present, he shows her how to forgive herself, and how to live again.

I hope you enjoy June and Jesse’s journey toward their second chance at love.

Watch out for these titles in the Perfect, Wyoming miniseries:

Other titles by this author available in ebook format.

was born and raised in southern Africa, but now lives in Whistler, a ski resort in the moody British Columbian Coast Mountain range. It’s a place of vast wilderness, larger-than-life characters, epic adventure and romance—the perfect place to escape reality. It’s no wonder she was inspired to abandon a sixteen-year career as a journalist to escape into a world of romantic fiction filled with dangerous men and adventurous women.

When she’s not writing you will find her long-distance running, biking or skiing on the trails and generally trying to avoid the bears—albeit not very successfully. She calls this work, because it’s when the best ideas come.

For a peek into her world visit her website, www.lorethannewhite.com. She’d love to hear from you.

To editors Patience Bloom, Keyren Gerlach and
Shana Smith. And to fellow authors Marie Ferarella, Linda Conrad, Kim Van Meter, Jennifer Morey and
Carla Cassidy—for making this series happen.
It’s been a pleasure to work with you all.

Special thanks and acknowledgment to Loreth Anne White for her contribution to the Perfect, Wyoming miniseries.

E
ager was trained to alert on human scent.

And that’s exactly what his handler, June Farrow, was hoping to find as she worked her four-year-old black Lab in a zigzag pattern across the wind, the glow from her headlamp casting a pale beam into blackness. It was 4:00 a.m. Cold. The cloud cover was low, and rain lashed down through trees.

As June and her K9 worked their way up the thickly forested slope, the terrain grew treacherous, with steep gullies and hidden caves. June prayed that Lacy Matthews and her three-year-old twins, Bekka and Abby, were holed up in one of those caves, dry and safe from the storm.

Because if Samuel’s men had found them, they were as good as dead.

Swaths of mist rolled down from the peaks and June’s hiking boots began to lose traction. More than once she had to grab onto brambles to stop from slipping down into one of the ravines hidden by the darkness and bush. Sweat prickled under her rain jacket and moisture misted her safety glasses. Water ran in a stream from the bill of her hat and it trickled uncomfortably down her neck.

While Eager was able to barrel like a tank through the increasingly dense scrub, the twigs began to tear at June’s clothes, hooking into her hair, clawing at her backpack, slowing her progress. This, she thought, as she stilled a moment to catch her breath, was why search-and-rescue teams used dogs—they could access places with ease that humans could not, especially a dog like Eager, who, with his stocky, deep-chested frame and thick coat, was impervious to the claw of brambles. And, having been bred from gundog stock, he was able to remain calm in the presence of loud rescue choppers and the big excavation machines often present in urban rescue.

June listened carefully to her surroundings, hoping to catch the faint sound of a woman’s cry on the wind. But a forest was never quiet, and in a storm like this, trees talked and groaned and squeaked as their trunks and branches rubbed together in the wind. Pine cones and broken branches bombed to the ground, and rain plopped from leaves. The pine needles in the canopy above swished with the sound of a river.

She could detect no cry for help amid the other sounds of the stormy night.

Tension coiled tight in her stomach.

Working solo was foolish, particularly for an experienced SAR tracker who knew better. But a desperation to find those three-year-old twins and their mother burned like fire in June’s chest, outweighing all caution.

Her own son had been three when he’d died.

If June had managed to dig deeper into her own reserves, search harder, faster, sooner, all those years ago, she might have arrived in time to save Aiden. Now she
had
to save Bekka and Abby. The reason they were lost in the woods was partly June’s fault, and they’d been missing for two nights now. The clock was ticking and guilt weighed heavy.

Eager more sensed than saw his handler’s directional signal, and he veered in an easterly direction, moving across the base of glistening-wet rock. All June could see of him was the pale green glow of his LED collar, and every now and then the wet reflection of his coat as he cut across the beam of her headlamp.

The moisture was actually working in Eager’s favor—it enhanced his scenting abilities, but the wind was confounding. It punched down through holes in the canopy and swirled in eddies around the forest floor, carrying any scent that might have been pooling on the ground or in gullies with it.

June saw her dog hesitate a moment, then suddenly the green collar bobbed as Eager went crashing off in a new direction across the flank of a cliff.

June rushed after him, heart pounding as she shouldered through bushes and skidded over wet deadfall. Then she lost sight of the fluorescent light. She stilled, catching her breath as she wiped rainwater from her face. Her hand was shaking, and June realized she was exhausted.

She was going to make a fatal error like this.

She willed herself to calm. Life depended on it, and not just hers.

But as she dug deep for self-control an image hit her hard and suddenly of a search gone wrong five years ago. A search that resulted in the dramatic deaths of her husband and son. She closed her eyes for a moment, trying to shake the accompanying and familiar sense of sheer and utter desperation.

It had happened because of a cult.

Her husband, Matt, had been sucked in by a religious organization, and when June had pressured Matt to leave, he’d kidnapped Aiden from day care, planning to take him to live on the cult compound.

Thunder crashed and grumbled in the mountains and another gust of wind swished through the trees. June’s nerves jumped. She braced her hand against the trunk of a tree.

Focus. You’re doing this for them. Everything you do now is because you messed up that time.

That devastating incident was why she now worked for EXIT, a national organization quietly dedicated to aiding victims of cults. June’s life mission had become running halfway houses for cult members who wanted to “escape.” If she could rescue others, if she could get them into safe houses where they could access exit-counseling, it might give meaning, somehow, to the gaping maw of loss in her own life.

It might help assuage her guilt for not having understood how to help Matt back then.

And it was because of Samuel Grayson and his dangerous cult of Devotees that June was in Cold Plains, Wyoming, now. She’d arrived on behalf of EXIT three months ago. Right now she had five Devotees in the safe house. Lacy and her children were supposed to make the number eight.

But something had gone wrong—Lacy and her girls had failed to meet June at a designated meeting place in the woods on Monday evening, from where June was to have escorted them to the secret safe house.

June had searched the area, tracking Lacy and her twins back along the trail that led down the mountain toward the town. Around 11:00 p.m. that night, Eager had alerted on a small, sparkly red shoe belonging to one of the twins. The shoe had been lying just off the trail. From that point the footprints had gone into the forest. June and Eager had followed Lacy’s trail deeper into the woods where more footprints appeared, and it looked as though two men had started following Lacy and the twins. June put Eager on the tracks, but the storm had broken and they’d lost the scent.