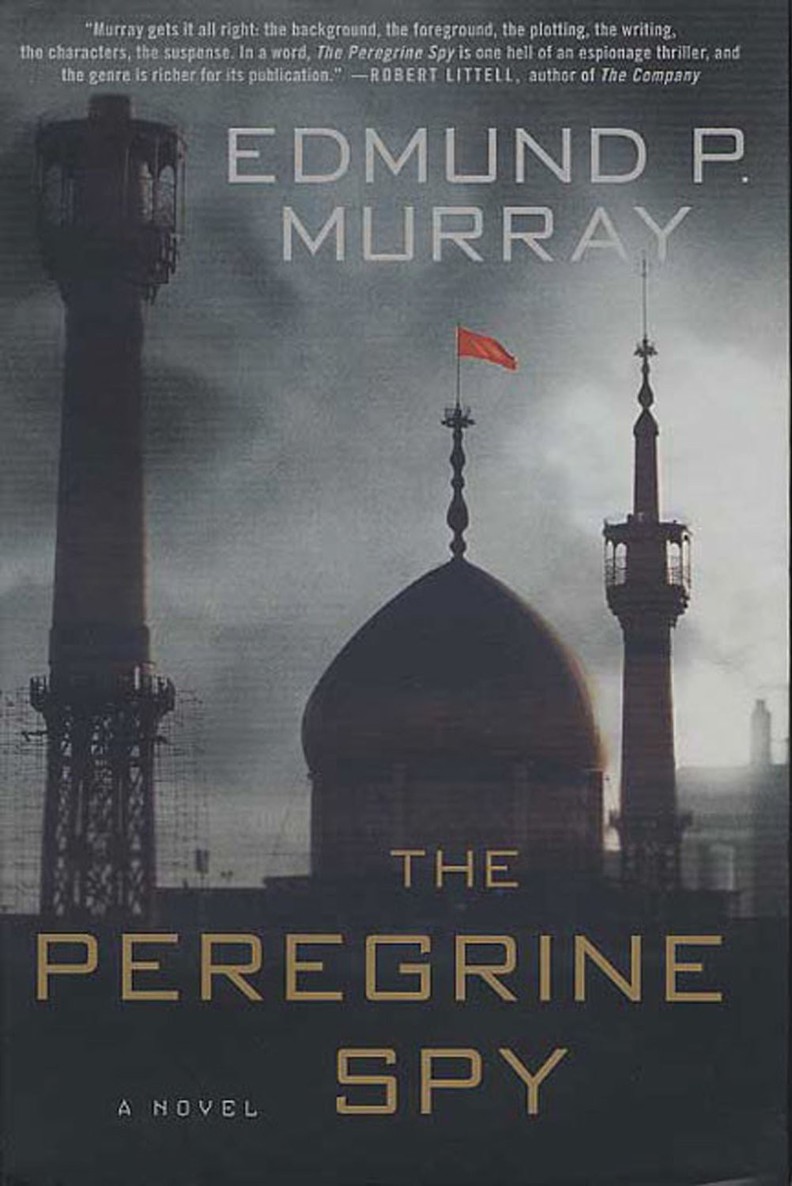 Other Books by Edmund P. Murray

Experience and imagination inform
The Peregrine Spy
as a novel. As a chronicle of Iran’s Islamic Revolution of 1978–79 and of the machinations of the American and Russian intelligence communities during that upheaval, however, research plays a major role. Like the novel’s main character, Frank Sullivan, I have never been much good at bureaucratic detail. I am therefore particularly indebted for information on the operational details and inner workings of such organizations as the Central Intelligence Agency, the National Security Council, the U.S. Department of State, and the Soviet KGB to a wide range of authors, including Vladimir Kuzichkin, Philip Agee, Victor Marchetti and John D. Marks, David Wise, William H. Sullivan, Edward Shirley, Milt Bearden, Ronald Kessler, Tom Margold, James A. Bill, and Gary Sick. I have been scrupulous in using only operational details previously written about in other easily available publications. Other writers about this period in Iran’s history whom I have relied on include Ken Follett, Elaine Sciolino, Manucher and Roxane Farmanfarmaian, Ervand Abramian, Betty Mahmoody with William Hoffler, Baqer Moin, Robin Woodsworth Carlsen, Amir Taher, Philip Hiro, Shaul Bakhash, Sandra Mackey, Diane Johnson, and Robin Wright. Rick Roberts’s unpublished memoir on living with acromegaly helped build the character of Vasily Lermontov. I owe a heavy debt to many Iranians who did their best to educate me about their complex country, its history and its religious conflicts. I also relied heavily on various services of the New York City Library system, including its microfilm archives of
The New York Times, The Washington Post, The Wall Street Journal,
and other periodicals.

“Sully, have I got a surprise for you.”

Frank Sullivan remembered the first time he’d shaken hands with Dan Nitzke. Clammy. That slick, sticky grip had worked its way into his memory: the touch, the feel of the way the agency had manipulated his life over the past dozen years. He corrected himself. The way I let the agency manipulate my life. He glanced at the hands now twisting the steering wheel of the car Dan drove. I know how that wheel feels, he thought.

Frank had expected to spend a few relaxed days in Washington, finding an apartment, settling into the job that was waiting for him, and getting a new driver’s license. Then he’d fly back to New York, pick up his son, and head off for a weekend at the apartment he lived in now, across the river in Weehawken. As promised, Dan Nitzke had met him at the Eastern shuttle baggage chute.

“Sort of. Two suitcases, a garment bag. I like to travel light, but I figured I’m going to be living here.”

“Yeah,” said Dan, looking away at the first of the suitcases tumbling out of the chute and onto the conveyor belt. “You’ll be living here.” His clear blue eyes peered out over his black-rimmed glasses as he glanced back at Frank. “Once this other thing’s over.”

Frank said nothing. He studied the honest blue eyes that watched him over the thick plastic rims. He remembered the days—and the long nights—when those eyes had been red-rimmed and rheumy and a meeting with Dan meant keeping a bottle of J. W. Dant bourbon shuttling between them across the Nitzkes’ dining room table. Since then, Dan had found his way back to sobriety. The eyes were clear now, but the rosacea that pocked his nose and cheeks remained. Frank watched him as they picked their way through the tiny, packed parking lot at National Airport. Dan looked away again. “I’ll lay it out for you in the car. Boy, are you gonna be surprised. We got a lot to do today.”

Today, thought Frank. November 1, 1978. I better remember the date. This is going to be one of those days my life changed. Again.

They sped through the Virginia suburbs. Dan talked nonstop, obliquely, with the radio turned high to country music and used car commercials. “We could’ve got you a license right there in Arlington, but it’s always mobbed, so I figured I’d run you down to Fairfield ’cause it’s still pretty much country down there and there’s never any wait, you’ll be in and out in an hour, and then I have to get you to the Triple A to get an international license and then, guess what, over to the Pentagon.”

“Well, it’s Pentagon because all the host-country people you’ll be working with are military, but before that we have to get you to a barbershop. Hair’s got to be shorter and that beard has to come off because—I mean, it might be different if it’s the navy, maybe you could at least keep the mustache, but Gus Simpson was in the marines, but the closest military counterpart is a navy commander so we decided Gus gets to be navy, you know Gus, so…”

“No foolin’?” Dan’s torrent stopped, but only for a moment. A few years ago he would have said, “No shit?”

“What the hell is this all about?”

Dan drove now with just his right hand on the wheel, twisting a thin strand of hair with his left. Though Dan could handle the written word with clarity and precision, Frank had learned with experience to follow his rambling conversations by waiting patiently for signposts. “Well, the third guy, you don’t know him, but he has an army background, so that leaves you with the air force officer rank parallel to your grade, which will make you a major, but
the air force likes its men clean shaven, and all that has to happen today because you’re on the Pan Am 110 flight out of Kennedy tonight.”

Frank reached over, touched the hand Dan had on the wheel, and waited for him to stop. “I go along with the haircut and the beard before I even know what the deal is, right? So then you’ve got me hooked and…”

“Sully, you’re great. Like I always say about you, you’re like the old fire horse. You hear that fire bell and you start salivating, ready to get right back in harness.”

Too true, thought Frank. Too damn true. A crackling alert to a shooting or a fire over his police radio when he’d started his newspaper career as a reporter. Or another agency call to a dangerous job in a distant place. And he was gone. Determined to do the job and do it right. His own writing put aside. The woman he lived with, the son he neglected, forgotten. It had happened in the past. He did not want it to happen again. But he’d heard the fire bell.

“You were never here,” Jackie had said, often, after they split. He knew he’d lost her because of the agency, and he’d vowed he would never inflict himself, or the agency, on a woman again. At least not for more than a night or a weekend or a month. My excuse for screwing around, he called it in cynical moments. Or my fear of getting hurt. Again. Or hurting someone else.

Dan’s monologue sped on. “I also gotta drop you off near the embassy so you can get your visa. It’s all arranged, but you have to go to the embassy on your own, and you’ll need your air force travel orders and Pan Am tickets first. I’ll pick you up same corner where I drop you forty-five minutes later. I’ll swing by every fifteen minutes. You know that drill.”

“You’ve thought of everything,” said Frank, guessing that Dan wanted him to ask what embassy he intended to drop him off at. Frank, suspecting he knew the answer, didn’t ask.

“Yeah, well, we had to. Besides, Sully, they really need you on this. Guys like you and Gus. Guys with real news media experience. And Third World experience. There’s not much of that expertise left inside. The idea comes straight out of the National Security Council, and I’ve gotta believe your old buddy Pete Howard had a hand in it. NSC and the agency’ve been working on this a long time, and then it all kind of jelled in a hurry.”

“We sure as hell hoped so. I know how bad we need you, and some of the bureaucrats we have, they’re suspicious of a guy like you because you’ve never been one of them. In fact, that’s going to be a problem because the other guy on the team, I call him Archie because his name is Bunker, Frederick J. Bunker, he’s a Mormon, real straitlaced and a real good bureaucrat, but he doesn’t know squat about media or much about the field. You’ll get along fine with Gus, but it’s Archie Bunker you’ll have to worry about. You figure out where it is?”

“Yeah, but I know you read the goddamn
Post
and the
Times
and the
Wall Street Journal
every friggin’ day, so I know you’ve been reading what’s going on, so I bet you figured it out, right? So tell me what you think.”

Dan turned and watched him and laughed nervously over the loud twang of a Johnny Cash song as Frank spoke the two syllables.

“Hey, I couldn’t even hear what you said, I was laughing so hard, but I read your lips, and I knew you’d figure it out.”

Wrapped up in his own reactions, he’d forgotten how Dan had been shamed by his oldest son. He had been a draft resister during the last stages of the Vietnam War.

“The hell you won’t, boy.” Dan’s lips had tightened. He had both hands on the wheel, and his knuckles turned white.

Shaper of Stone (The Shapers Book 1) by Keith Keffer
Minister Without Portfolio by Michael Winter
Marius' Mules: Prelude to War by S.J.A. Turney
Sex with the CEO: A Billionaire Romance (The Midnight Collection Book 1) by Cross, Kassandra
AM02 - The End of the Wasp Season by Denise Mina
The Tree of Forgetfulness by Pam Durban
Parallelities by Alan Dean Foster
Lead Me On by Victoria Dahl
The Doomed Oasis by Innes, Hammond;
Sin's Dark Caress by Tracey O'Hara