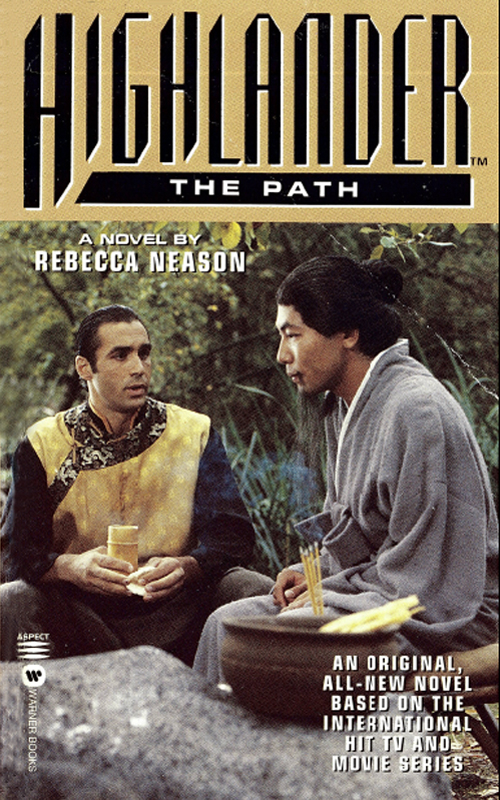 Duncan’s heart seemed to freeze at the sound, but not his feet. He was running even before the thought could form.

He ran toward the city gates that had been closed and barred against invasion. But no—one side stood open to the road. And
in its frame played a scene from the mouth of Hell.

A girl, a creature of love and tenderness, struggled with a man. His upraised hand gripped an odd-shaped sword; even from
the distance Duncan could see the blood on the blade. With all the strength of her slender body, the girl was holding against
him. Duncan pushed his body to its limit and beyond, but they were so far away—too far away.

The man looked straight at Duncan. An odd smile twisted his face. Suddenly Duncan knew what was to come.

The cry began in the pit of his stomach. The war cry of his clan, a sound as untamed as the hills that gave it birth, poured
from Duncan’s throat. Two hundred years of civilization fell away with the sound…

Also in the Highlander Series:

The Element of Fire
by Jason Henderson

Scotland the Brave
by Jennifer Robertson

Measure of a Man
by Nancy Holder

Aspect is a registered trademark of Warner Books, Inc.

Also in the Highlander Series

Duncan MacLeod smiled as he raised a glass of orange juice toward his lips. Some mornings were better than others, and this
had been one of the good ones.

He had begun his day with an hour of
kata
, both sword form and open hand, pushing himself through the stylized movements until his body warmed and his mind focused.
For over two hundred years this had been his way of putting the mundane concerns of daily life into perspective; it was his
path to the balance he needed to survive his Immortality.

Suddenly, the presence of another Immortal seared through MacLeod like the blare of a trumpet felt in the bones. His hand
went to the hilt of his
katana
, the Japanese samurai sword that was never far from his side. His muscles tensed, ready to spring into the action of survival
as his eyes swept across his familiar surroundings, automatically checking defensive positions and strategies.

A second later a voice reached him. “Hey, Mac—Mac, you home?”

As quickly as it had come, the tension drained from MacLeod’s body and he smiled again, not bothering to answer. By now Richie
would have felt MacLeod’s presence the same way Duncan felt his, the way one Immortal always sensed another.

Richie was a young Immortal, new to the Game, and his age still matched his physical appearance. He looked to be, and was,
a well-built young man in his early twenties. MacLeod, on
the other hand, looked in his thirties, maybe thirty-five, but the reality was quite different.

Whether thirty-five or four hundred, MacLeod looked good for his age. Some of his appearance—the thick dark hair he usually
kept pulled back in a ponytail, the heavy-lidded dark eyes that flashed beneath thick lashes, the high cheekbones and strong
chin—were genetics, and he could take no credit for them. But the sleek, well-toned body, the broad shoulders, muscular chest,
stomach, and thighs, the balance and catlike grace were all things he worked hard to maintain. It was not vanity, it was survival—a
sloppy Immortal lost his head.

The elevator stopped. Richie opened the slatted wooden door and stepped out into Duncan’s apartment. It was as though a wave
of energy crested through the confined space, sparking out of his hazel eyes and the curls of his light reddish brown hair.
MacLeod turned to look at the young man who was his student, and his friend.

“And what’s that?” MacLeod asked, his smile not quite hiding the cynicism in his voice. Richie’s idea of fun was sometimes
as far removed from MacLeod’s as, well, as their generations. Centuries apart.

“You know there’s this big rally down at the stadium tomorrow?” Richie walked over to the counter and poured himself a glass
of juice from the pitcher MacLeod had left sitting there.

“I’ve heard about it,” Duncan replied.

He looked at MacLeod, full of self-congratulatory smiles, obviously waiting for Duncan’s enthusiasm to match his own. But
MacLeod just shook his head slightly and turned back to his half-finished breakfast.

“Oh, come on, Mac—I thought this was just the sort of thing you’d love. You know, world peace, brotherhood of man…”

“Look, Richie,” MacLeod said as he forked up the last piece of egg on his plate. “I think it’s great that you want to go,
but I don’t think it’s a good idea for me.”

MacLeod stood and carried his plate to the sink, trying to ignore
Richie’s disappointed expression. Richie’s face was always expressive; it could go from one extreme to the other and back
again in an instant. MacLeod had ceased letting himself be influenced by it. Most of the time, anyway. Seeing that, Richie
changed his tactics.

“Then you should definitely go hear him, but count me out.”

MacLeod headed for the elevator. Downstairs at the back of the dojo was his office and some paperwork he had promised himself
he would finish today—and he had a new member due in an hour. It was days like today when he most missed Charlie’s deft hand
at running the dojo. Duncan knew his friend was doing something he believed in, but in the three weeks since Charlie had left
for the Balkans, the rhythm of the dojo had changed—and MacLeod found he missed Charlie’s style of in-your-face caring.

Richie followed MacLeod into the elevator. As soon as the door closed, he started in again.

“What am I missing here, Mac? You can’t mean it’s
because
of the Dalai Lama you won’t go to the peace rally?”

“But he’s one of the ‘Great Men of Our Time,’ isn’t he? I mean everyone respects him—except, maybe, the Chinese government
that exiled him. Even living in exile he keeps working for world peace. I thought you’d want to go hear him. He talks about
a lot of the same stuff you do.”

“If we talk about the same thing, why do I need to go hear him?” MacLeod countered with a smile as they stepped off the elevator.
“Let it go, Richie.”

It was a vain hope, and MacLeod knew it even as he said it. Richie never let anything drop until his curiosity was satisfied—or
he got his way.

MacLeod walked into his office and took the seat behind the desk. Again Richie followed him. He paced restlessly across the
small area and back again. Then he stopped and leaned forward on the desk, looking into his mentor’s eyes.

“Talk to me, Mac. So far you haven’t given me a single reason that makes sense. Besides”—he straightened and gave MacLeod
one of his best “trust-me” smiles—“I had to pull a lot
of strings to get these seats—eight rows back, right on center aisle. They’re great seats, Mac, and expensive.”

Duncan leaned back in his chair and looked up at the young man, pleased in so many ways by what he saw. The Richie of today
was very different from the seventeen-year-old petty criminal who had broken into MacLeod’s antique shop a few years ago.
Oh, he still thought he could charm the bees out of their honey—and sometimes he could—but the old Richie Ryan would never
have attended anything more serious than a rock concert, not unless there was a get-rich-quick scheme involved.

But the years with MacLeod had made quite a difference in the young man, and Duncan was proud of the changes. It was more
than the martial arts and sword training, though MacLeod was a great advocate of the physical and mental discipline they accorded.
By the time Richie “died” the first time and became aware of his own Immortality, he had already seen enough to know the Game
was in deadly earnest. He had thrown himself into his training with the single-mindedness felt only by the young. It had paid
off; MacLeod no longer worried about Richie meeting another Immortal each time he left the dojo.

While this physical training would help him stay alive, it was the internal changes that would in MacLeod’s opinion, make
the years, perhaps centuries, ahead of the young man worth living. Under Duncan’s sometimes stern, sometimes amused tutelage,
the street-wise opportunist that circumstances had forced Richie to become had given way to the man of honor Richie had always
been beneath the veneer.

MacLeod knew he could not take all the credit. Much of it went to Tessa, the remarkable mortal woman with whom Duncan had
been living when Richie first appeared. She had been a woman of rare beauty, beauty that began with her face and went all
the way through to her soul. MacLeod had loved her as he had loved few others.