Read The Oresteia: Agamemnon, the Libation-Bearers & the Furies Online

The Oresteia: Agamemnon, the Libation-Bearers & the Furies 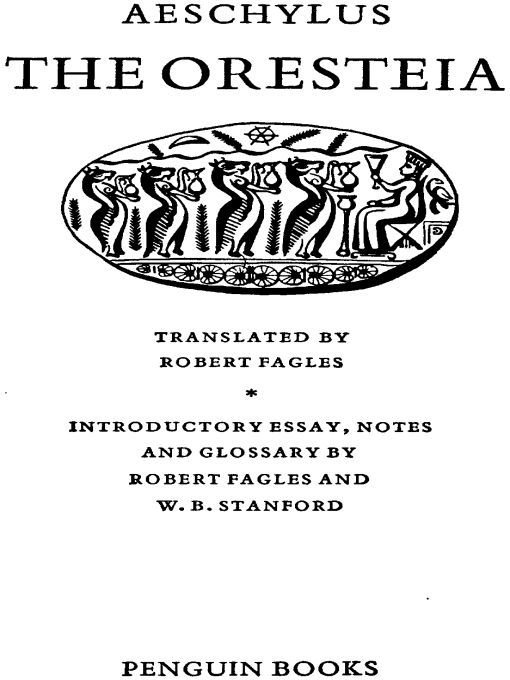 CLASSICS
THE ORESTEIA
AGAMEMNON, THE LIBATION BEARERS, THE EUMENIDES
AESCHYLUS was born of a noble family at Eleusis near Athens in 525 B.C. He took part in the Persian Wars and his epitaph, said to have been written by himself, represents him as fighting at Marathon. At some time in his life he appears to have been prosecuted for divulging the Eleusinian mysteries, but he apparently proved himself innocent. Aeschylus wrote more than seventy plays, of which seven have survived:
The Suppliants, The Persians, Seven Against Thebes, Prometheus Bound, Agamemnon, The Libation Bearers, and The Eumenides.
(All are translated for Penguin Classics.) He visited Syracuse more than once at the invitation of Hieron I and he died at Gela in Sicily in 456 B.C. Aeschylus was recognized as a classic writer soon after his death, and special privileges were decreed for his plays.
ROBERT FAGLES is Arthur W. Marks ’19 Professor of Comparative Literature, Emeritus, at Princeton University. He is the recipient of the 1997 PEN/Ralph Manheim Medal for Translation and a 1996 Academy Award in Literature from the American Academy of Arts and Letters. Fagles has been elected to the Academy, the American Academy of Arts and Sciences, and the American Philosophical Society. He has translated the poems of Bacchylides. His translations of Sophocles’
Three Theban Plays,
Aeschylus’
Oresteia
(nominated for a National Book Award) and Homer’s Iliad (winner of the 1991 Harold Morton Landon Translation Award by The Academy of American Poets, an award from The Translation Center of Columbia University, and the New Jersey Humanities Book Award) are published in Penguin Classics. His original poetry and his translations have appeared in many journals and reviews, as well as in his book of poems,
I, Vincent: Poems from the Pictures of Van Gogh.
Mr. Fagles was one of the associate editors of Maynard Mack’s Twickenham Edition of Alexander Pope’s
Iliad
and
Odyssey,
and, with George Steiner, edited
Homer : A Collection of Critical Essays.
Mr. Fagles’ most recent work is a translation of Homer’s
Odyssey,
available from Penguin.
The late W B. STANFORD was Senior Fellow of Trinity College Dublin and Regius Professor of Greek at Dublin University, where he became Chancellor. His several works include the acclaimed
Ulysses Theme,
definitive editions of Homer’s
Odyssey,
Sophocles’
Ajax
and Aristophanes’
Frogs, Aeschylus in His
Style, pioneering studies of metaphor and ambiguity in Greek poetry, and The Sound of Greek, Greek Tragedy and the Emotions, and with J.V. Luce, The Quest for
Ulysses.
Stanford served as representative of Dublin University in the Senate of the Irish Republic from 1948 to 1969 and as chairman of the Dublin Institute for Advanced Studies beginning in 1972. 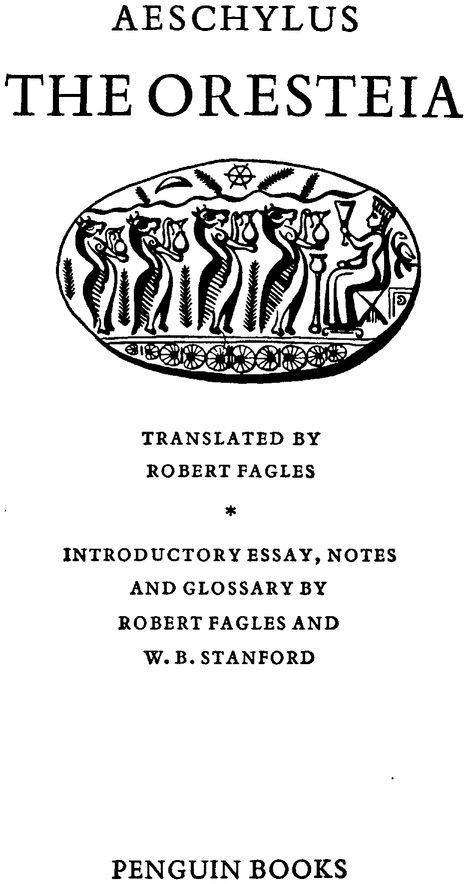 FOREWORD
My thanks to Aeschylus for his companionship, his rigours and his kindness. I found him a burly, eloquent ghost, with more human decency and strength than I could hope to equal. As I tried to approach him, I remembered what they said of the ghost of Hamlet’s father: ‘We do it wrong, being so majestical, To offer it the show of violence.’ Translation has its violent moments, and I suppose it must. It begins with attraction, then a kind of attack, and it ends, if you are lucky, with a strong impersonation of your author. Whatever the end, at any rate, it is meant to be a thing of love and homage. So in thanking that proud old spirit, I would also ask for his forbearance, if he should ever hear what I have written in his name.
Now it is time to let this version of the
Oresteia
speak for itself, without apologies or statements of principle (petards that will probably hoist the writing later). A translator’s best hope, I think, and still the hardest to achieve, is Dryden’s hope that his author will speak the living language of the day. And not in a way that caters to its limits, one might add, but that gives its life and fibre something of a stretching in the process. In translating Aeschylus I have also tried to suggest the responsion of his choral poetry - the paired, isometric stanzas that form the dialectic dance and singing of his plays in Greek - but I have done so flexibly. and using English rhythms. The translation has its leanings, too, yet they are loyal to Aeschylus, at least as I perceive him, and loyal to the modem grain as well. There is a kinship between the
Oresteia
and ourselves; a mutual need to recognize the fragility of our culture, to restore some reverence for the Great Mother and her works, and especially to embrace the Furies within ourselves, persuading them, perhaps, to invigorate our lives. I hope this kinship can be felt in the English text and supported by the introductory essay.
The essay begins and ends with broader, general sections; in between come more detailed descriptions of each play. The final version of the introduction is my own, particularly the freer conjectures about images and symbols, the moral power of the Furies, and the psychological and religious dimensions of the
Oresteia
. My collaborator, W. B. Stanford, has supplied accounts of the dramatic action and a good deal of historical and linguistic material - the discussion of the watchman, Clytaemnestra’s third speech, and her crucial exchanges with Agamemnon and the elders. The passages on technique owe much to him, to what he has written for the purpose, and his books on Greek metaphor, ambiguity, and
Aeschylus in His Style.
As we indicate later, we have shared the writing of the notes. We have relied on Fraenkel’s edition of
Agamemnon
with few exceptions, on Murray’s of
The Libation Bearers and The Eumenides
with help from other scholars. (Unfortunately Denys Page’s new edition of Aeschylus arrived too late for us to use). Marginal line numbers refer to the English while those at the head of each page refer to the original Greek. We have kept the English or Latin forms of the most familiar proper names, but have transliterated the rest.
I could not have done my part without the help of many people. Bedell Stanford first, of course. He offered me what I have needed most, Ionic tolerance and Doric discipline. So much patience with my questions, so many cautions to revise - he has been the brake to my locomotive, in his phrase, and the conscience of Aeschylus in mine. Before they met their deaths in June 1971, my friends Anne and Adam Parry often came to my rescue with their knowledge, comradeship and warmth. Robert Fitzgerald helped me on many points, even as late as the galleys of the first edition, with his Homeric magnanimity and tact. Kenneth Burke taught me that
The Eumenides
is less tragic than I had thought, and less transcendental than he would like. And the one who led me to translate the
Oresteia
gave me his painstaking, strenuous criticism of the opening play, its notes and introduction. He would rather not be named; I owe him more than I can say.
Others have helped as well, with advice or encouragement or both. The list is long because the work was long, and they were very generous. Some are gone now - Alan Downer, Dudley Fitts, Erich Kahler, Robert Murray, Jr, and Fred Wieck. But many more remain: Donald Carne-Ross and the staff of
Arion
, where parts of the translation first appeared; Patricia Purcell Chappell, Julius Cohen, Robert Connor, Mark Davies, Francis Fergusson, Joseph Frank, Georgine and Ralph Freedman, Caroline Gordon, Edmund Keeley, Bernard Knox, Hanna Loewy, Maynard Mack, Mary Renault, Erich Segal, George Steiner, Dorothy Thompson, Kathryn Walker, Rex Warner, Theodore Weiss, and Theodore Ziolkowski.
My students ought to know how much I have learned about tragedy from them. I think of William Abernathy, Louis Bell, Kathleen Costello, James Donlan, Ruth Gais, Katherine Callen King, Kathleen Komar, David Lenson, James McGregor, Robert Scanlan, Celeste Schenck, Janet Levarie Smarr and Macklin Smith. And I remember the brave actors who performed an early version of
Agamemnon
at McCarter Theatre in 1966, Angela Wood, and George and Susan Hearn. Princeton University granted me leaves of absence to work on Aeschylus, and the Research Committee freely saw to my expenses.

Timeless (Immortal Love Series) by Richie, Amy
Long Past Stopping by Oran Canfield
Sensations by Tessie Bradford
The Price We Pay by Alora Kate
The Vampire and The Paramedic by Jamie Davis
Moving On (Cape Falls) by Crescent, Sam
A Pinch of Snuff by Reginald Hill
Uneven Ground by Ronald D. Eller
The Dark City by Imogen Rossi
Mythborn by Lakshman, V.