Read The Next Move Online 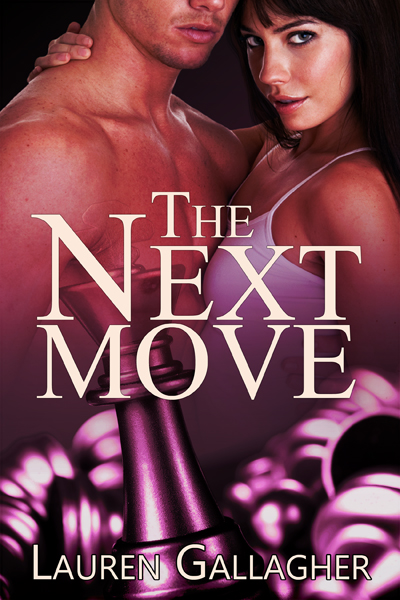 Other Titles By Lauren Gallagher

This is a work of fiction. The characters, incidents and dialogues in this book are of the author’s imagination and are not to be construed as real. Any resemblance to actual events or persons, living or dead, is completely coincidental.

A Division of Champagne Books

Mom, Dad, and Eddie for the love and support,

Nichola for the discipline,

The people of Absolute Write for the information,

Everyone who has ever believed in me for the faith,

And everyone who has ever doubted me for the challenge.

"Damn it." Chris Bailey leaned back in his chair, shaking his head. "She wins again."

Kat Morgan lifted her wine glass off the coffee table and gave him a smug grin. "That’s what you get for not paying attention."

"I was paying attention." He rolled his eyes and picked up his glass.
Paying attention, but not to the game, that’s for damn sure
.

Swirling her wine, she laughed. "So that’s why you took my knight when my queen was as open as a hooker’s legs?"

Chris choked on his wine. Clearing his throat, he shook his head again. "You’re so classy."

She shrugged. "Just speaking your language."

He pretended to give it some thought. "Okay, you’re right."

"Arrogant wench." He chuckled and gestured towards the board with his glass. "Now what the hell are you talking about? Your knight was a move away from putting me in check."

"Check, but not checkmate." She set her glass down and leaned forward, backtracking the pieces to their last few positions. "See? You could’ve taken my queen out with your rook, because all I had to do was move over here—"

His eyes followed her hand, but instead of watching

the queen’s path across the board, drifted up Kat’s arm to her shoulder, where a hint of black lace peeked out from beneath her grey sweatshirt. Swallowing hard, he tried not to let his mind fill in the blanks and draw a mental picture of the rest of her bra.
Christ, she even dresses sexy when she’s dressed down
.

"—and when you moved that bishop to take out my knight," she went on, oblivious to his wandering eyes. "You also lost your one defense against my queen. Thus," she sat up, squaring her shoulders and grinning at him. "Checkmate."

She raised her glass as well, the devilish twinkle in her eyes suddenly making him wish he was drinking something a hell of a lot stronger.
Come on, man, it’s Kat. What is wrong with you
?

"Absolutely." His head was a bit light from the last couple of glasses, but it was still early. Knowing them, they’d be up until three in the morning playing chess, so he wouldn’t be driving anytime soon. Odds were, he’d crash on her couch again anyway.

He watched her walk out of the living room and into the kitchen.
What I wouldn’t give to spend a night on a different piece of her furniture
.

Setting the wine glasses on the counter, Kat let out a long breath and closed her eyes, pausing for a moment to collect her thoughts.
What is the matter with me tonight
?

It wasn’t like this was an unusual evening for them. They’d been friends since high school and, especially since they’d both been single for the last year or so, spent a lot of time together. Just hanging out. Just friends. She could let her hair down around him, be herself, not try to impress him. Because she wasn’t supposed to be attracted to him.

Glancing back into the living room, she caught his eye and he smiled. Letting out a breath, she turned her attention back to getting their drinks, pretending that smile didn’t make her head spin more than her last few drinks.

She poured the wine, trying to keep her hands steady. This was the kind of nervousness she expected on a first date, not on an evening in with a longtime friend. Not with
Chris
.

It wasn’t that he was unattractive. Quite the contrary. Everything about him was attractive and always had been, but tonight, the air about him seemed different.

She couldn’t remember his eyes being so stunning. Whether it was the vivid green color or maybe the way they narrowed when he gave her that devilish grin, she didn’t know. He’d always had beautiful eyes, but suddenly she couldn’t tell if the mischievous sparkle meant he was thinking of his next witty remark, or some deliciously filthy thought that he didn’t dare speak.

Earlier, she’d caught him looking at her exposed bra strap. She’d been a second away from adjusting her shirt to cover it, but when she realized he was looking at it, she left it be.

For God’s sake, it’s Chris. What is wrong with me
?

They’d touched thousands of times in the past, but it was always completely platonic. A friendly hug. A shoulder to cry on. A dance or two every now and then. They’d touched when he taught her how to swing at the batting cages and when she taught him to shoot at the gun range.

Tonight, though, just taking his wine glass from him— touching something that was touching him—made her skin tingle.

Whatever it was, at this point, the only thing stopping her from coming onto him was the fear that he didn’t return her feelings. Even satisfying the tingling ache inside her wasn’t worth risking their friendship.

Looks like I’ll be up for a while after he goes home tonight
.

She picked up the glasses and headed back into the living room, nearly dropping them when he looked up and gave her that heart-stopping smile.

"You okay?" He laughed as she almost tripped over her own feet.

"I’m fine." She handed him a glass. "Maybe I’ve just had a few too many of these." She raised her glass, and then took a sip.

"Oh please," he said. "This from the woman who could probably drink the entire Navy under the table and still play chess."

"Being a nerd with a high tolerance for alcohol has its perks." She laughed.

"I’m home on a Friday night playing chess, aren’t I?"

"I am
not
a nerd." He nodded towards the board, which was set up for the next game. "Your move."

After a few turns, Kat watched Chris consider his next move. She cocked her head. "We’re really pathetic, aren’t we?"

His eyes flicked towards her, then back to the board. "Why? Because we drink and play chess?"

"No, because we're playing chess on a Friday night instead of out painting the town or getting laid."

He gestured dismissively. "That's not pathetic. I don't know about you, but sometimes I need a break from all of that headache and aggravation."

"So you come over and let me whoop your ass at chess?"

"Out of four games." He moved his knight and captured her bishop. He held it up between two fingers. "The night’s still young, my dear. I have plenty of time to catch up."

Or we could just skip the chess altogether
. Ignoring the way her cheeks burned, she looked at the board, trying to decide on her next move.

"Honestly, I’d rather do this than be out on the prowl anyway," he said. "I hate all the dating bullshit."

"Why’s that?" She glanced up from trying to decide between sending in a rook to take out his vulnerable bishop, or sacrificing a pawn in hopes that he’d take the bait and put his queen in harm’s way again.

He took a sip of his wine. "It’d probably be easier if I didn’t want to get laid. I mean, sometimes when I’m out with a girl, I’m not into her enough to put in the effort to impress her into a second date, but I wouldn’t mind impressing her into bed. If I wasn’t so damned desperate to get her—
any
woman—into bed, I wouldn’t bother trying to impress some of these women at all."

Snickering as she sacrificed her pawn, Kat grinned. "And you say I’m classy."

"Good point. Been there, done that. More times than I can count." She sat back to let him take his turn. She idly swirled her wine glass. "You know, there are some upshots to first dates."

He raised his eyebrows. "Such as?"

"That first kiss," she said. "There’s nothing quite like it."

He sat up, looking at her with a stunned expression. "Katrina Morgan, are you suggesting that you would let a man kiss you on the first date?"

She rolled her eyes. "Please. I’ve let first dates do a hell of a lot more than kiss me."

Even though he laughed as he dropped his attention back to the board, she swore his cheeks colored. And was that a nervous swallow?

He took the bait and moved his queen, opening up a perfect attack by her knight. She moved her pieces, captured his queen, and smirked at the twin lines that appeared between his eyebrows.

"Didn’t see that coming did you?" she said.

"Stop gloating, woman," he growled, grinning at her. He paused. "So you’re a first kiss junkie?"

"You could say that. I guess it’s not even the kiss itself," she said. "It’s the anticipation. Everything leading up to the kiss. You know, that moment when you hit a point of no return, when someone is close enough that it's not
if
they're going to kiss you, it's
when
. It's like—"

She looked at the board, furrowing her brow. "Damn it, how did you…?" Retracing the steps of the last few turns, she realized her fatal error. In baiting him to sacrifice his queen, she’d let her guard down and moved the crucial knight away from her king.

"Guess you should have been paying attention," he said with a smirk.

"I was paying attention."

Her breath caught. So did his. Their eyes met for a second, and then they each went for their wine glasses.

"I need another drink." She gestured with her now empty glass. "You?"

"Please." He avoided her eyes as he handed her the glass.

Once her back was turned, he looked at her. As he did earlier, he watched her walk into the kitchen, letting his imagination run wild at the thought of what else she hid beneath that sweatshirt and those casual jeans. She was dressed to relax, not to tease, but tease she did. He couldn’t count the number of times he’d seen her dressed for a club— tight, low-cut tops, super short skirts or skintight leather pants—but she was just as attractive dressed this way.

Kat was simply too sexy to be unsexy.

Tonight, more than ever, he wished he had the nerve to tell her he wanted her.

Still, she’d told him a few stories without even

realizing it. Welts on her wrists that looked distinctly like marks he’d gotten himself a time or two from handcuffs. An occasional subtle wince and stiffness in her gait, suggesting that her hips had done more than their fair share of work the night before. And while Chris was certainly no cosmetics expert, he couldn’t help but notice one night that the smudge of lipstick on her collar was a dramatically different shade than her own.