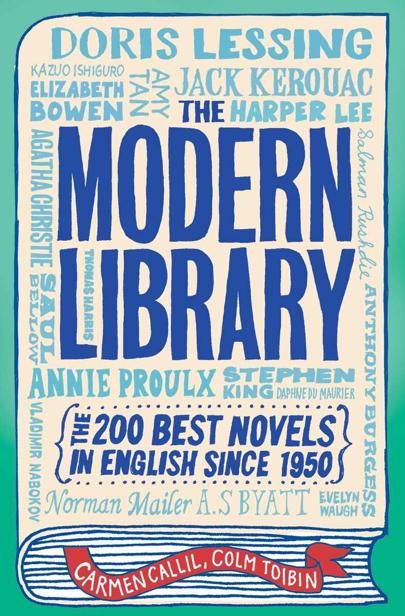 Autobiographies and memoirs by novelists chosen in this book

Literary biographies of novelists chosen in this book

Books such as this often come with a daunting or gloomy introduction in which the condition of the novel is put under a microscope. Is the novel read? Is the novel dead? Has anything worthy been written since Austen, Dickens, Melville, Joyce? How can the novel compete with satellite and cable television, video, films, CD roms, the internet, sport, rock music and other forms of what is known as mass culture? We live today, in the famously miserable words of the American critic Harold Bloom, in the ‘Age of Resentment’ in which ‘devoted and solitary readers are now necessarily beleaguered’: culture is in irretrievable decline, the romance of reading gone for ever. We think otherwise. Merchants of cultural doom are hostile to change. We are not: we embrace it, were brought up with it, wallow in it rather, fighting political correctness with one paw, and gloomy ideologies with the other.

For the novel survives and flourishes: there are more bookshops than ever before, and wider choice; late twentieth-century
marketing
methods have been skilfully used by publishers; novels continue to be a source for film, television and the theatre. As anyone who has worked in the business of publishing, or who has been published, however fretfully, knows, the second fifty years of this century – the years we two have lived through – have been a period as sublime and exciting as any other for the novel. The mass market paperback came into its own during these fifty years. Books have benefited from a revolution in publishing and printing and selling methods; the computer has waved a magic wand over most publishing processes; authors have more rights, and many, if still too few, earn more money.

Enthusiasm is the driving force of this book. Its purpose is to celebrate the writers we have loved best, and to proselytize on behalf of their novels: sources of entertainment and enjoyment as satisfying as any Hollywood movie, football match, computer game or rock video. We recommend these novels, not for their academic interest, or their illustration of the theory of the death of the author (an invention, in Carmen Callil’s opinion, of academic literary critics with not enough to do to pass the time of day), but for precisely the opposite reason, for their illustration of the very life of the author, the power of the live voice, the passion to tell a story, invent characters and find a form.

The Modern Movement in literature – as represented by, say, Eliot, Joyce, Pound and Woolf has been seen as a great revolution which swept everything else away, or, on the other hand, as an insurrection, a rebellion, which seemed like a revolution until everything went back to the state it was in before the insurgents began. The novels written in English over the last fifty years manage to illustrate both of these theories.

Novels have appeared: William Gaddis’s
The Recognitions,
for example, or Alasdair Gray’s
Lanark
or Thomas Pynchon’s
Gravity’s
Rainbow
or Angela Carter’s
Wise Children
or Iain Sinclair’s
Downriver
– which take their bearings from Joyce and Woolf, which remain massively ambitious and complex, in which
language
and form are fluid and under pressure, in which notions of characters, dialogue, plot, action are open to question.

But other novels have appeared alongside them, such as John Steinbeck’s
East of Eden
or Anita Brookner’s
Family and Friends
or Sam Hanna Bell’s
December Bride
or Patrick Hamilton’s
The West
Pier
or Elizabeth Jenkins’s
The Tortoise and the Hare
or Margaret Laurence’s
A Jest of God
, which seem to take their bearing from a much earlier tradition, which treat character and plot and dialogue as not open to question at all, and insist successfully on an earlier narrative style, a system in which things are slowly revealed and objects in the landscape are described in some detail.

And then there is a third way in which novelists have worked – and this is the most common. They have attended to all the lessons which Joyce and Woolf taught about language and form and especially voice and tone, but they have refused to abandon completely lessons learned from other novelists who adhered to more traditional methods. Thus the revolution did not cause the destruction of the novel in which character and voice and plot play a non-revolutionary role; instead, it refined the idea of character and voice and plot, it made novelists more self-conscious, more careful, and the language of the novel more precise, snappier and richer. Thus the battle between Modernism and tradition has been enabling and useful for the individual talent and the individual reader: it allows us not to take sides, but to reap the rewards of what is various and multi-faceted.

Over the past fifty years the map of the novel has changed. There are countries where English is seen as both a plague inflicted on the population and at the same time as a language which they have come to possess more sonorously than the English themselves. In this way, we have studied the novel in English, and not the English novel. And so, here is a choice from India, Pakistan, New Zealand, England, Ireland, Scotland, the USA, Australia, Canada, Africa, the Caribbean, Hong Kong and more.

An example of the joy to be found in this worldwide flowering of the novel in English is the sheer pleasure of coming across, say, the fiction of modern India, in which all the familiar narrative genius of the traditional novel – the eighteenth-century
confessional
novel, the nineteenth-century Dickensian novel – is
completely
transformed into a vehicle for dramatizing the sprawl, variety and sense of infinite possibility which is modern India. At the other end of the scale, the Scottish novel in the 1980s and 1990s has become a sharp weapon in the battle for Scottish identity and autonomy.

The period from 1950 is characterized by a change in those who wrote and read fiction too. Women have moved to the centre of the novel, so that if you look at the list which we have made today and compare it with an equivalent list from the first half of the century, the new power of women as writers is obvious, though the tradition in which they write is not new at all. Anyone who has read the work of Jane Austen and looks then at the work of Penelope Fitzgerald, Ivy Compton-Burnett, Elizabeth Taylor, Elizabeth Jolley, Beryl Bainbridge will notice a definite continuity of tone and theme, and the abiding presence of wit. The silent history of certain human experiences was made public for the first time in a number of influential novels – not only by women, but by writers from parts of the world which had never produced writers before. And these became vital for people, not only as books which they enjoyed, but as books which changed their lives – Toni Morrison’s
Beloved
, Doris Lessing’s
The Golden Notebook
, Chinua Achebe’s
Things Fall Apart
, Frank Hardy’s
Power Without Glory
, John McGahern’s
Amongst Women
.

Another reason for this book is to represent the novelist as a person who performs a function essential to the soul of every community: the secret conscience of the tribe. Some of us live in societies in which our governments support and celebrate
sportsmen
and sportswomen, film stars, opera singers and pop singers and ignore more or less completely their writers. This is particularly true of England and the USA where the gap between those who are aware of their literary inheritance and those who are not is uncomfortably large. Other countries are different. In societies such as Ireland or Scotland, as we have already said, the novel has come to fill in certain gaps, spaces between the public and the private, and the novelist – whether he or she likes it or not – has seemed to strengthen a fragile identity. In Nigeria, the novelist has become a dangerous opposition to those in power. In Canada, they produce only geniuses. In other societies where whole communities have been marginalized and impoverished, the novel has yet to enter its heroic phase.

On the other hand, the way the novel has developed has not always been appreciated by the publishing industry. Publishers in London or New York, still the two centres of power in English language publishing, continue to display very little interest in the writers of, say, Australia or India. There are the Whites and Maloufs and the Mistrys and Desais, of course, but in Britain and the United States it is hard to find the books of Elizabeth Jolley or Jessica Anderson, and much of Narayan is out of print. With the continuing demise of the power of the editor within publishing, there is even less chance that the true richness of English-language fiction will be internationally known. We have used bookshops and scholars all over the world to help us track down hidden treasures, and it seems to us amazing, having done this work, that writers such as Eugene McCabe, Frank Sargeson, Alistair MacLeod and Bapsi Sidwha have not won the international fame that they deserve. They belong to an international secret canon which this book seeks to disclose.

What we have noticed and appreciated in these books is the sense of the individual voice at work and sometimes at play, the individual will, the individual choice, the individual talent, the direct relationship between the writer and the reader. (No wonder governments are suspicious of writers.) But there are fascinating national myths and mores, aspects of heritage and history, to which many writers subscribe.

It is, of course, not possible to talk about a National Style for novelists, but some themes have endured: from the Indian novels chosen here you will learn a great deal about Partition, the British Raj, the caste system, the influence of mass poverty and religion on India; there are a good number of novels in this list about racial tension in the United States (Morrison, Baldwin, Harper Lee, Styron, Pete Dexter, Doctorow); other Americans, men only, attempt a sweeping, ambitious history, as though no other version existed (Pynchon, DeLillo, McCarthy, Heller, Mailer); other Americans manage to dramatize the individual’s isolation, eccentricity and sense of not being part of the official version (Flannery O’Connor, Cheever, Marilynne Robinson, Salinger, Edmund White, Plath, Easton Ellis). In Africa, the conflict between colonized and colonizer remains a theme which no one can escape. In Ireland, the Troubles haunt some contemporary writing, but then other writers (Beckett, Roddy Doyle, John Banville) refuse to deal with them, and their work becomes all the richer and stranger for that. In Britain, the rise of Margaret Thatcher (Mrs Torture in Salman Rushdie’s phrase) has animated a number of novelists (Martin Amis, Angela Carter, Jonathan Coe, Alasdair Gray), and the class system has provided novelists with much material (Pat Barker, Elizabeth Jenkins, Agatha Christie, Maureen Duffy, Bruce Chatwin, L. P. Hartley). In England novelists have also played with a storytelling tradition, producing novels that have a solidity and beauty (Alan Hollinghurst, Julian Barnes, Anthony Powell, Sylvia Townsend Warner). In Australia, the creation of the new nation itself, the arrival of the whites and their efforts to make a society out of that vast country, and to come to terms with its original inhabitants, has been a large theme. It is impossible to make generalizations about Canada: the connection between Michael Ondaatje, Alice Munro, Mavis Gallant, Margaret Atwood, Robertson Davies, Mordecai Richler, Alistair MacLeod and Margaret Laurence is only that they are writers whom everyone should read.