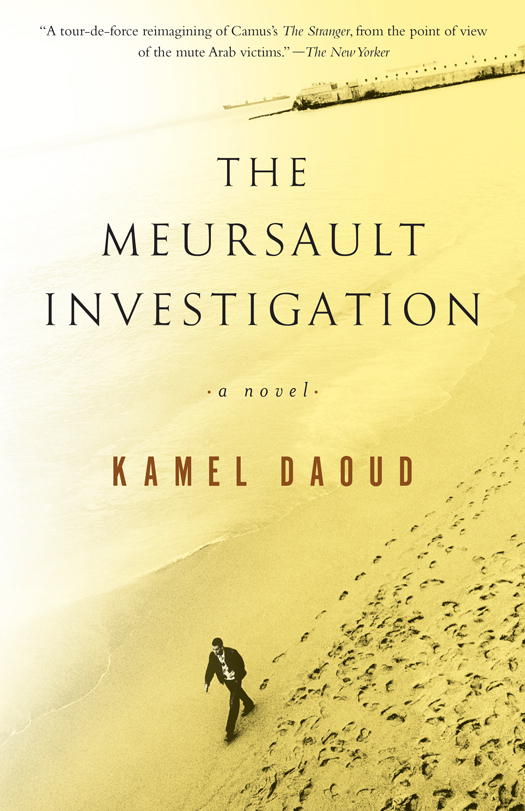 Originally published in French as
Meursault, contre-enquête
by Éditions Barzakh in Algeria in 2013, and by Actes Sud in France in 2014.

An excerpt from this novel was first published in the April 6, 2015 issue of
The New Yorker
.

The author has quoted and occasionally adapted certain passages from
The Stranger
by Albert Camus, translated by Matthew Ward (New York: Alfred A. Knopf, 1988). The lyrics on
this page
are from “Malou Khouya” by Khaled.

All rights reserved. No part of this publication may be reproduced or transmitted in any form or by any means, electronic or mechanical, including photocopying, recording, or by any information storage and retrieval system, without written permission from Other Press LLC, except in the case of brief quotations in reviews for inclusion in a magazine, newspaper, or broadcast. For information write to Other Press LLC, 2 Park Avenue, 24th Floor, New York, NY 10016. Or visit our Web site:
www.otherpress.com

Publisher’s Note:
This is a work of fiction. Names, characters, places, and incidents either are the product of the author’s imagination or are used fictitiously, and any resemblance to actual persons, living or dead, events, or locales is entirely coincidental.

The hour of crime
does not strike at the

same time for every people. This

explains the permanence of history.

She doesn’t say anything now, but there are many tales she could tell. Unlike me: I’ve rehashed this story in my head so often, I almost can’t remember it anymore.

I mean, it goes back more than half a century. It happened, and everyone talked about it. People still do, but they mention only one dead man, they feel no compunction about doing that, even though there were two of them, two dead men. Yes, two. Why does the other one get left out? Well, the original guy was such a good storyteller, he managed to make people forget his crime, whereas the other one was a poor illiterate God created apparently for the sole purpose of taking a bullet and returning to dust — an anonymous person who didn’t even have the time to be given a name.

I’ll tell you this up front: The other dead man, the murder victim, was my brother. There’s nothing left of him. There’s only me, left to speak in his place, sitting in this bar, waiting for condolences no one’s ever going to offer. Laugh if you want, but this is more or less my mission: I peddle offstage silence, trying to sell my story while the theater empties out. As a matter of fact, that’s the reason why I’ve learned to speak this language, and to write it too: so I can speak in the place of a dead man, so I can finish his sentences for him. The murderer got famous, and
his story’s too well written for me to get any ideas about imitating him. He wrote in his own language. Therefore I’m going to do what was done in this country after Independence: I’m going to take the stones from the old houses the colonists left behind, remove them one by one, and build my own house, my own language. The murderer’s words and expressions are my
unclaimed goods
. Besides, the country’s littered with words that don’t belong to anyone anymore. You see them on the façades of old stores, in yellowing books, on people’s faces, or transformed by the strange creole decolonization produces.

So it’s been quite some time since the murderer died, and much too long since my brother ceased to exist for everyone but me. I know, you’re eager to ask the type of questions I hate, but please listen to me instead, please give me your attention, and by and by you’ll understand. This is no normal story. It’s a story that begins at the end and goes back to the beginning. Yes, like a school of salmon swimming upstream. I’m sure you’re like everyone else, you’ve read the tale as told by the man who wrote it. He writes so well that his words are like precious stones, jewels cut with the utmost precision. A man very strict about shades of meaning, your hero was; he practically required them to be mathematical. Endless calculations, based on gems and minerals. Have you seen the way he writes? He’s writing about a gunshot, and he makes it sound like poetry! His world is clean, clear, exact, honed by morning sunlight, enhanced with fragrances and horizons. The only shadow is cast by “the Arabs,” blurred, incongruous objects left over from “days gone by,” like ghosts, with no language except the sound of a flute. I tell myself he
must have been fed up with wandering around in circles in a country that wanted nothing to do with him, whether dead or alive. The murder he committed seems like the act of a disappointed lover unable to possess the land he loves. How he must have suffered, poor man! To be the child of a place that never gave you birth …

I too have read his version of the facts. Like you and millions of others. And everyone got the picture, right from the start:
He
had a man’s name; my brother had the name of an incident. He could have called him “Two P.M.,” like that other writer who called his black man “Friday.” An hour of the day instead of a day of the week. Two in the afternoon, that’s good.
Zujj
in Algerian Arabic, two, the pair, him and me, the unlikeliest twins, somehow, for those who know the story of the story. A brief Arab, technically ephemeral, who lived for two hours and has died incessantly for seventy years, long after his funeral. It’s like my brother Zujj has been kept under glass. And even though he was a murder victim, he’s always given some vague designation, complete with reference to the two hands of a clock, over and over again, so that he replays his own death, killed by a bullet fired by a Frenchman who just didn’t know what to do with his day and with the rest of the world, which he carried on his back.

And again! Whenever I go over this story in my head, I get angry — at least, I do whenever I have the strength. So the Frenchman plays the dead man and goes on and on about how he lost his mother, and then about how he lost his body in the sun, and then about how he lost a girlfriend’s body, and then about how he went to church and
discovered that his God had deserted the human body, and then about how he sat up with his mother’s corpse and his own, et cetera. Good God, how can you kill someone and then take even his own death away from him? My brother was the one who got shot, not him! It was Musa, not Meursault, see? There’s something I find stunning, and it’s that nobody — not even after Independence — nobody at all ever tried to find out what the victim’s name was, or where he lived, or what family he came from, or whether he had children. Nobody. Everyone was knocked out by the perfect prose, by language capable of giving air facets like diamonds, and everyone declared their empathy with the murderer’s solitude and offered him their most learned condolences. Who knows Musa’s name today? Who knows what river carried him to the sea, which he had to cross on foot, alone, without his people, without a magic staff? Who knows whether Musa had a gun, a philosophy, or a sunstroke?

Who was Musa? He was my brother. That’s what I’m getting at. I want to tell you the story Musa was never able to tell. When you opened the door of this bar, you opened a grave, my young friend. Do you happen to have the book in your schoolbag there? Good. Play the disciple and read me the first page or so …

So. Did you understand? No? I’ll explain it to you. After his mother dies, this man, this murderer, finds himself without a country and falls into idleness and absurdity. He’s a Robinson Crusoe who thinks he can change his destiny by killing his Friday but instead discovers he’s trapped on an island and starts banging on like a self-indulgent parrot. “Poor Meursault, where are you?”
Shout out those words a few times and they’ll seem less ridiculous, I promise. And I’m asking that question for your sake.
I
know the book by heart, I can recite it to you like the Koran. That story — a corpse wrote it, not a writer. You can tell by the way he suffers from the sun and gets dazzled by colors and has no opinion on anything except the sun, the sea, and the surrounding rocks. From the very beginning, you can sense that he’s looking for my brother. And in fact, he seeks him out, not so much to meet him as to never have to. What hurts me every time I think about it is that he killed him by passing over him, not by shooting him. You know, his crime is majestically nonchalant. It made any subsequent attempt to present my brother as a
shahid
, a martyr, impossible. The martyr came too long after the murder. In the interval, my brother rotted in his grave and the book obtained its well-known success. And afterward, therefore, everybody bent over backward to prove there was no murder, just sunstroke.

Ha, ha! What are you drinking? In these parts, you get offered the best liquors after your death, not before. And that’s religion, my brother. Drink up — in a few years, after the end of the world, the only bar still open will be in Paradise.

I’m going to outline the story before I tell it to you. A man who knows how to write kills an Arab who, on the day he dies, doesn’t even have a name, as if he’d hung it on a nail somewhere before stepping onto the stage. Then the man begins to explain that his act was the fault of a God who doesn’t exist and that he did it because of what he’d just realized in the sun and because the sea salt
obliged him to shut his eyes. All of a sudden, the murder is a deed committed with absolute impunity and wasn’t a crime anyway because there’s no law between noon and two o’clock, between him and Zujj, between Meursault and Musa. And for seventy years now, everyone has joined in to disappear the victim’s body quickly and turn the place where the murder was committed into an intangible museum. What does “Meursault” mean?
Meurt seul
, dies alone?
Meurt sot
, dies a fool? Never dies? My poor brother had no say in this story. And that’s where you go wrong, you and all your predecessors. The absurd is what my brother and I carry on our backs or in the bowels of our land, not what the other was or did. Please understand me, I’m not speaking in either sorrow or anger. I’m not even going to play the mourner. It’s just that … it’s just what? I don’t know. I think I’d just like justice to be done. That may seem ridiculous at my age … But I swear it’s true. I don’t mean the justice of the courts, I mean the justice that comes when
the scales are balanced
. And I’ve got another reason besides: I want to pass away without being pursued by a ghost. I think I can guess why people write true stories. Not to make themselves famous but to make themselves more invisible, and all the while clamoring for a piece of the world’s true core.