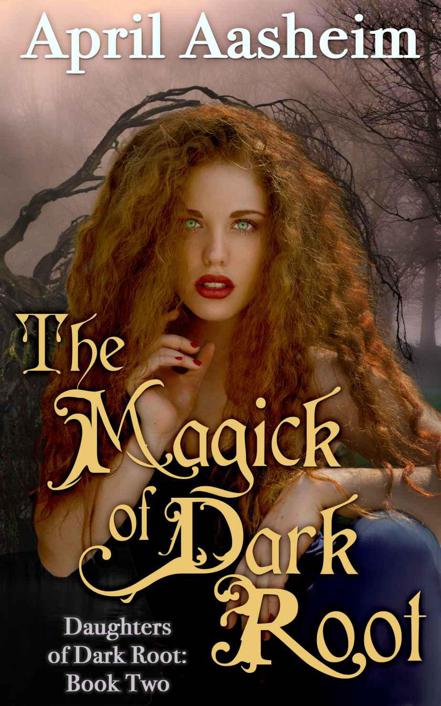 THE MAGICK OF DARK ROOT

This ebook is licensed for your personal enjoyment only. This ebook may not be re-sold or given away to other people. If you would like to share this book with another person, please purchase an additional copy for each person you share it with. If you're reading this book and did not purchase it, or it was not purchased for your use only, then please visit an official vendor for the work and purchase your own copy. Thank you for respecting the author's work.

Synopsis for
The Magick of Dark Root

“There are rules that must be followed, Maggie.”

“Especially in witchcraft. What someone puts into the world comes back to them.”

“Like, karma, yes. But for a witch it comes back threefold. Never forget that.”

“Who said life was fair?”

In the second installment of
The Daughters of Dark Root
series, Maggie Maddock and her sisters are back, training under their coven-leading mother Miss Sasha Shantay to take over as the new leaders of The Council. But life isn’t as smooth as Maggie had hoped it would be. Harvest Home’s taxes have come due, and her mother’s illness has returned, stronger than ever. Desperate, Maggie and Eve devise a scheme to make money through witchcraft.

To my dad, who told me about the garden.

The Forest of Dark Root, Oregon

Sasha Benbridge ran through the forest, her chestnut hair streaming behind her, its tips alight in the near-silver sun, like fairy dust trailing a shooting star.

Light on her toes and nimble with youth, Sasha rushed towards the spot where she’d seen the sterling cord of lightning strike the earth minutes before. Excitement threatened to swallow her whole as she raced towards her destiny. Her mother had predicted that she would find her tree today, and Sasha never knew her mother to be wrong, at least in the matters of witchcraft.

“Hurry!” she encouraged herself, though her voice was lost to the wind that whipped through the endless woods around her. She quickened her pace, leaping over the fallen branches and dense brush that impeded her path. She couldn’t risk losing her tree. At twenty years old, she had waited too long already. But today was the day she would take her wand and come into her full power as a witch. She just knew it.

Sasha heard the rush of water ahead of her and she ran full speed towards the sound. At last, she found herself out of the shadowy woods, standing within a still-green field divided by a gushing turquoise river.

Though she was a daughter of the forest, she wanted a clear view of her surroundings before performing the ritual.

To her right, she glimpsed a man-sized shape crouching among a clump of bushes. She could only hope it was a bear. Her mother had taught her that there were more frightening things in the world than wild animals, and until Sasha had her wand, she doubted that she could match the worst of them. She touched the amulet that hung around her neck and said a brief spell of protection. Without sound, the shape slunk back into shadow.

Sasha inhaled the crisp morning air as she surveyed her surroundings.

In the center of the meadow, at the top of a gentle slope, just feet from the river, rose up a solitary tree: a thirty-foot willow with moonbeam-colored limbs that bowed towards the earth in smooth, clean arcs. The ground around the tree was slushy with ice, evidence that winter was on the horizon. Sasha approached it carefully. One misstep and she would certainly slide down the steep embankment and into the treacherous river that roared at her like a hungry lion.

The willow’s branches undulated in the wind like long, sinuous fingers, beckoning her forward.

Sasha lifted several of the lower boughs and ducked into the tree’s canopy as near darkness enfolded her in the secret chamber. She crept beneath the limbs, towards the tree’s center, one hand gripping her amulet as she reached forward with the other.

When she reached the trunk, she ran her hands along its circumference, feeling the bark beneath her palms. Her hand touched a very warm patch of wood and she pulled away instinctively. Even in the darkness she could tell that the trunk had been scorched.

A smile crossed her face. This was the tree that had been struck by lightning. Her mother’s prophesy had been correct.
The Lightning Willow.

She would have her wand.

Satisfied, Sasha crept back out and stood before the tree. Being the only willow she had seen in the area, Sasha knew it had absorbed all the magic-rich nutrients of Dark Root reserved for trees of its kind.

Her fingers twitched and tingled as she pondered the possibilities.

“Blessed tree,” she began, kneeling with arms outstretched. “My name is Sasha Benbridge and I have come to ask permission to take one of your limbs in order to create my wand. I am pure of heart and I will not use its magick to inflict harm upon others.”

Sasha waited, watching for a response.

The boughs dipped, as if in acquiescence.

She stood and retrieved the small knife from the garter concealed beneath her cotton dress. She displayed the knife, giving the tree a moment to reconsider. When it did not move, she stepped forward.

“I'm sorry if this hurts,” she whispered as she carefully sawed off a thin branch the length of her forearm. The tree flinched and she stroked it until it calmed.

“Thank you,” she said, encircling her palm around its severed limb.

Within seconds the Lightning Willow had healed.

To her right, Sasha noticed a figure emerge from the woods: a tall, lank woman in a scarlet cloak.

“Larinda, were you following me? I suppose you will run to Mother and tell on me? Well, she knows I’m here and…”

Hunted by William W. Johnstone
The Duke in Disguise by Gayle Callen
Under the Blood Moon (The Stargazers Trilogy Book 1) by Lee, Summer
A Fall of Marigolds by Susan Meissner
Immortal At Sea (The Immortal Chronicles Book 1) by Gene Doucette
A Country Gentleman by Ann Barker
The Fountainhead by Ayn Rand
Pampered to Death by Laura Levine
¿Tení­an Ombligo Adan y Eva? by Martin Gardner
Pretty Little Devils by Nancy Holder