Read The Likeness: A Novel Online

The Likeness: A Novel 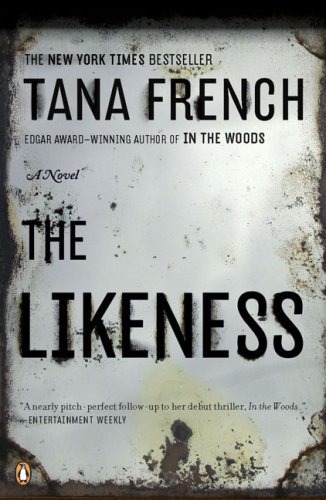 Without limiting the rights under copyright reserved above, no part of this publication may be reproduced, stored in or introduced into a retrieval system, or transmitted, in any form or by any means (electronic, mechanical, photocopying, recording or otherwise), without the prior written permission of both the copyright owner and the above publisher of this book.
The scanning, uploading, and distribution of this book via the Internet or via any other means without the permission of the publisher is illegal and punishable by law. Please purchase only authorized electronic editions and do not participate in or encourage electronic piracy of copyrightable materials. Your support of the author’s rights is appreciated.

For Anthony, for a million reasons

S
ome nights, if I’m sleeping on my own, I still dream about Whitethorn House. In the dream it’s always spring, cool fine light with a late-afternoon haze. I climb the worn stone steps and knock on the door—that great brass knocker, going black with age and heavy enough to startle you every time—and an old woman with an apron and a deft, uncompromising face lets me in. Then she hangs the big rusted key back on her belt and walks away down the drive, under the falling cherry blossom, and I close the door behind her.
The house is always empty. The bedrooms are bare and bright, only my footsteps echoing off the floorboards, circling up through the sun and the dust motes to the high ceilings. Smell of wild hyacinths, drifting through the wide-open windows, and of beeswax polish. Chips of white paint flaking off the window sashes and a tendril of ivy swaying in over the sill. Wood doves, lazy somewhere outside.
In the sitting room the piano is open, wood glowing chestnut and almost too bright to look at in the bars of sun, the breeze stirring the yellowed sheet music like a finger. The table is laid ready for us, five settings—the bone-china plates and the long-stemmed wineglasses, fresh-cut honeysuckle trailing from a crystal bowl—but the silverware has gone dim with tarnish and the heavy damask napkins are frilled with dust. Daniel’s cigarette case lies by his place at the head of the table, open and empty except for a burnt-down match.
Somewhere in the house, faint as a fingernail-flick at the edge of my hearing, there are sounds: a scuffle, whispers. It almost stops my heart. The others aren’t gone, I got it all wrong somehow. They’re only hiding; they’re still here, for ever and ever.
I follow the tiny noises through the house room by room, stopping at every step to listen, but I’m never quick enough: they slide away like mirages, always just behind that door or up those stairs. The tip of a giggle, instantly muffled; a creak of wood. I leave wardrobe doors swinging open, I take the steps three at a time, I swing round the newel post at the top and catch a flash of movement in the corner of my eye: the spotted old mirror at the end of the corridor, my face reflected in it, laughing.

T
his is Lexie Madison’s story, not mine. I’d love to tell you one without getting into the other, but it doesn’t work that way. I used to think I sewed us together at the edges with my own hands, pulled the stitches tight and I could unpick them any time I wanted. Now I think it always ran deeper than that and farther, underground; out of sight and way beyond my control.
This much is mine, though: everything I did. Frank puts it all down to the others, mainly to Daniel, while as far as I can tell Sam thinks that, in some obscure and slightly bizarro way, it was Lexie’s fault. When I say it wasn’t like that, they give me careful sideways looks and change the subject—I get the feeling Frank thinks I have some creepy variant of Stockholm syndrome. That does happen to undercovers sometimes, but not this time. I’m not trying to protect anyone; there’s no one left to protect. Lexie and the others will never know they’re taking the blame and wouldn’t care if they did. But give me more credit than that. Someone else may have dealt the hand, but I picked it up off the table, I played every card, and I had my reasons.

Forsaken World:Coming of Age by Thomas A Watson
Emmy Laybourne by Dress Your Marines in White [ss]
A Not So Perfect Crime by Teresa Solana
Desperately Seeking Suzanna by Elizabeth Michels
Mummy Madness by Andrew Cope
Minutes to Midnight by Phaedra Weldon
Rebel Without a Cake by Jacklyn Brady
Three to Get Deadly by Janet Evanovich
Instant Daddy by Carol Voss
Flirting With Fire (Hometown Heroes) by Kyra Jacobs