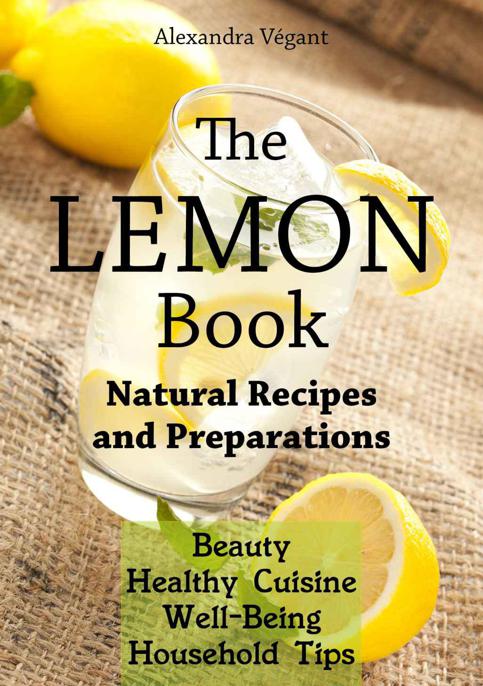 More books by the same author:

The history of the lemon

The benefits of lemons

Lemons as an “all-purpose remedy”

Rice with lemons and walnuts

Cream of tofu with lemon

Fusilli with lemon zest and walnuts

All the information in this book has been carefully gathered and scrupulously checked. Nevertheless, the possibility of finding incorrect information in it cannot be completely excluded. The publisher and author can be held under no obligation or guarantee, particularly of completeness; they take no responsibility for any accident or injury resulting from the application of any practical advice given here. The advice given in this book can under no circumstances replace a medical opinion.

You can find me:

on my French blog:
www.petitsmenusbio.com

THE HISTORY OF THE LEMON

Legend has it that when she and Adam were driven out of the garden of Eden, Eve picked a lemon and took it away with her. Fearing God's anger, Adam told her to throw the fruit away, and so she buried it in a place as heavenly as Eden itself, the Baie de Garavan. That's how the first lemon tree sprang up on Earth, in the Menton region...

The virtues of the lemon have been known for thousands of years. The earliest record of the presence of this citrus fruit dates from 2,500 years BC in the north of India.

Lemons were then cultivated in China and South-West Europe, in the Middle-East and finally throughout the Mediterranean basin, thanks largely to the crusaders, who popularised them.

In the Middle Ages, the discovery of their effectiveness against worms and scurvy made them a precious commodity. Many human lives were saved thanks to the introduction of lemon juice into the diets of sailors decimated by scurvy.

Previously lemons had been cultivated solely for decorative purposes.

Ancient pharmacology adopted the lemon well before its culinary uses were discovered.

Traditional knowledge is nowadays borne out by science. Biochemical analysis shows that lemons are rich in substances which promote human health, and they are used abundantly in medicinal preparations.

Theophrastus, the Greek philosopher and scientist, was the first to describe the therapeutic virtues of the fruit in his famous botanical work on the history of plants “...lemon is useful in cases of poisoning and it sweetens the breath...”.

Following Theophrastus's suggestions, many doctors in antiquity sung the praises of the juice or a decoction of lemon as a cure for bad breath.

Lemons were also considered to be an excellent antidote to poison: Pliny, Dioscorides and Theophrastus all agreed on their effectiveness against all the lethal poisons.

In the 1
st
century AD Dioscorides, a military doctor who was mainly interested in official botany, recommended ground lemon seeds mixed with wine as a laxative, and for pregnant women he advocated lemons to combat “desires”.

In 40 AD, Scribonius Largus, personal physician to the emperor Claudius, recommended treating gout with a poultice of lemons cooked in vinegar, then crushed and mixed with aluminium sulphate and myrrh.

Claudius Galenus, one of the most renowned physicians of antiquity who lived in the second century AD, considered lemon zest to be a tonic for the stomach “if ingested in small quantities.”

The Greeks and Romans were not the only ones to appreciate the preventative and medicinal properties of lemons. Before them the Chinese and Assyrians had left accounts of citrus fruits being used in this way.

Wherever lemons have been encountered, they have been appreciated for their beauty, perfume and therapeutic properties.

Return to the Table of Contents

The lemon tree (Citrus Limonum) is a shrub belonging to the family of Rutaceae, which is well-adapted to the temperate climate of the Mediterranean basin. The tree is very sensitive to cold; it can be grown in the garden, preferably sheltered from the wind and with good exposure to sunlight. The plant tolerates high summer temperatures well, provided it is frequently and abundantly watered. Manuring in spring and autumn increases its productivity.

Those not lucky enough to have a garden can buy it in a pot and place it on a sunny balcony. Potted lemon trees do not grow very big but they can bear fruit all year round if they are well cared for. In winter, care should be taken to bring them inside, or protect them with a protective winter sheet if the temperature falls below 12°c.

The fruit is roughly oval in shape, with a skin which is more or less thick depending on the variety. When ripe it takes on a bright yellow colour; the skin contains a large quantity of essential oil and aromatic alcohols in its oil-producing glands.

Lemon essence is extracted from the bark and used in perfumery, as well as in the production of soap and cleaning products.

In an average fruit, 30% of its weight is made up of juice. Its constituents include citric acid, malic acid, calcium and potassium citrate, mineral salts, mineral nutrients such as iron, phosphorus, magnesium, copper, large quantities of vitamin B1, B2, B3, carotene, vitamin A, vitamin C (up to 50mg/100g of juice), and vitamin P.

Having a lemon tree at home is a real joy and a significant source of basic materials for making homemade products, from cooking to cleaning products, as well as beauty treatments, as you will discover in this book.

In the Menton area (French Riviera), several varieties of lemon tree are cultivated by citrus farmers: the Santa Theresa, the Villafranca and the Eureka, among others.

A PGI label (Protected Geographical Indication) is under consideration, to distinguish this fruit which is particularly rich in acids and essences.

Its bright yellow colour, its sweet perfume and its abundantly fruit-bearing branches have established its reputation among numerous restaurateurs and delicatessens.

A large lemon festival has been organised every year in Menton since the nineteen-thirties; in February 2013, the whole town celebrates its 80
th
anniversary.

The “Femminello Syracusano” (PGI) is the variety cultivated in the region of Syracuse in Sicily.

Protected by a PGI label, this lemon has a thin albedo or pith (the white part beneath the yellow skin), and a very smooth skin.

Its richness in high-quality essential oils, its juice content (34% of the weight of the fruit) and vitamin C content (around 75mg per fruit) make it a top-of-the-range product.

Return to the Table of Contents 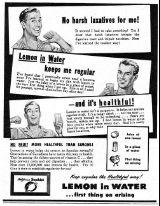 THE BENEFITS OF LEMONS

Almost all of the ripe fruit can be used: the juice, pulp, skin, flowers and leaves.

After harvesting, the fruits are treated with
fungicides and chemical waxes
which prolong their conservation. These substances, which are potentially bad for the health, stay on the fruit until it reaches our plates. that is why it is preferable to buy organically grown lemons, and those which still have their leaves. If this is not possible, carefully brushing the fruit under the tap will reduce the concentration of pesticides on the surface.

The most widely-used component of the lemon is doubtless its
juice
, which combines its
refreshing and thirst-quenching properties
(as the basis of numerous drinks) with its
antiseptic powers
. Lemon juice has a thinning and
purifying effect
on the blood, it makes the arteries more elastic and it contributes to the
fixation of calcium
. It also has
astringent qualities
and it is recommended in cases of dysentery and enteritis. Its
diuretic properties
are an aide to
slimming and detoxification
. Its function in regulating the metabolism and the digestive functions is of particular interest when dieting. Its high citric acid content makes it helpful in
preventing gallstones
and in the treatment of mild forms of poisoning.