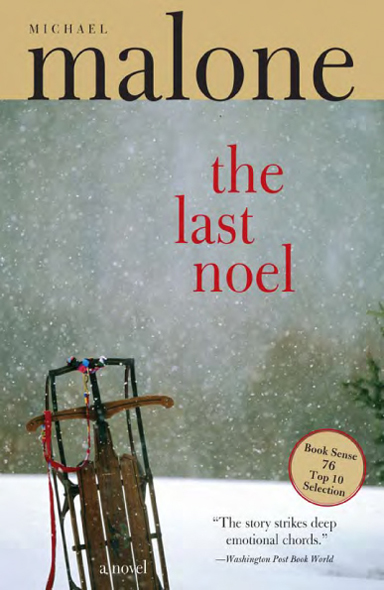 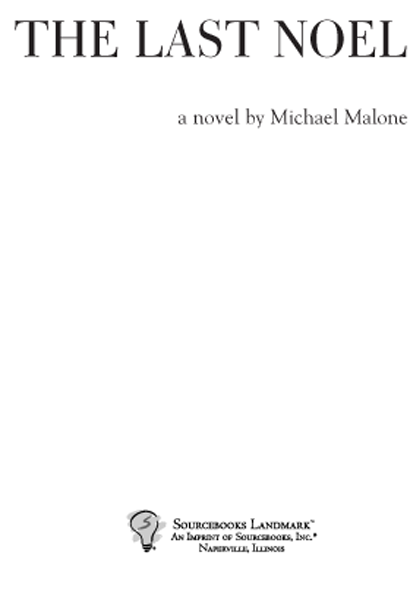 All rights reserved. No part of this book may be reproduced in any form or by any electronic or mechanical means including information storage and retrieval systemsâexcept in the case of brief quotations embodied in critical articles or reviewsâwithout permission in writing from its publisher, Sourcebooks, Inc.

This novel is entirely a work of fiction. The names, characters and incidents portrayed in it are the work of the author's imagination. Any resemblance to actual persons, living or dead, events or localities is entirely coincidental.

The last noel : a novel / by Michael Malone.

Printed and bound in the United States of America

The First Day of Christmas

The Second Day of Christmas

The Third Day of Christmas

The Fourth Day of Christmas

The Fifth Day of Christmas

The Sixth Day of Christmas

The Seventh Day of Christmas

The Eighth Day of Christmas

The Ninth Day of Christmas

The Tenth Day of Christmas

The Eleventh Day of Christmas

The Twelfth Day of Christmas

My thanks to Jennifer Fusco and Hillel Black for wise editorial counsel, to Judith Kelly for her indefatigable, invaluable support, and to Megan Dempster for her elegant designs. Thanks as well to Peter Matson and to Todd Stocke, Alex Lubertozzi, Peter Lynch, Bill Osterman, Chris Pierik, Heidi Kent, Maggy Tinucci, Sean Murray,
Jeff Tegge, Tom Murphy, Wayne Donnell, and George Carroll. For musical advice, my thanks for Nancy Goodwin and Kelsey Weir.

As ever, my gratitude to Dominique Raccah for her remarkable vision as a publisher. And to Maureen, always my first and fiercest and favorite reader, thank you.

The First Day of Christmas

From the foot of her four-poster bed she peered into the night. Then with a yawn, she asked the strange dark-skinned boy across the room in her window, “How did you get all the way up here?”

“Climbed,” he said, pulling himself over the ledge to lean into her bedroom. “Wake up and come on outside with me.”

For more than thirty years they were to quarrel about who had said what when they met, and whether she'd been frightened when he scrambled through her second-floor bedroom window, whether taking the sled from under the Christmas tree had been her idea or his, whether she had kissed him when they fell into the snow bank at the bottom of Heaven's Hill, or he had kissed her, or the kiss had never happened.

He always claimed that when she first heard her window open, she cried out, “What do you want?” and hid under the coverlet on her high tulipwood bed, the white blankets like the great drifts of snow falling on all the holly and boxwood outside.

But she said he had not scared her at all. She had just turned seven that day, and it wasn't until long afterwards, not
until her teens, that somehow her courage began to fail her. Besides, she insisted, she'd known from the first glance that this late-night intruder was only, like herself, a child, and would do her no harm. What had awakened her was not the rasp of the window rising, but rather the cold sharp air and the fresh wet unfamiliar smell of snow blowing into her room. At the smell of the snow, she had come fully awake, shaking off her dream with a shiver. She saw at once that this night was different, filled with soft whirling light. It was the unexpected snow that first drew her attention, not the strange child who'd come so surprisingly to tell her about it.

They were the same age, born within hours of one another, but because she had arrived first, late on Christmas Eve, and his birth was not until the early dawn of Christmas Day, she would sometimes fight against his dominance with claims of her own seniority. It was a battle waged for years and never won.

Their names were Noni and Kaye.

Before her birth her parents had already named her Noelle, because she was expected at Christmas. Noelle Katherine Tilden. Her godfather, head of obstetrics at the southern university where her father had once played basketball, the university whose library bore her mother's family name, had delivered the baby girl without complication at nine in the evening on the 24th of December. He gave her to some nurses and went home. Her mother was unconscious at the time, designedly so. Several hours afterwards, slightly intoxicated, her father drove to the hospital from a holiday party, late to his daughter's birth. The party had been at the bank where he held with a lovely indifference a position as his father-in-law's loan manager. When Bud Tilden first held his daughter, so pink and gold, so solemn and poised and earnest in his arms, he christened her “Princess.” And Princess he always called her until his death years later, when, again slightly intoxicated, he died with the same careless nonchalance that in his youth had been so charming.

That first night as he kissed the infant girl, her perfect nose wrinkled in displeasure and she turned away from the woody smell of his cigarettes and bourbon. Her father laughed in his sweet easy way. “The princess doesn't like it, do you, honey?” And he tapped her nose with a tan finger.

The following dawn, in Montgomery, Alabama, the boy John Montgomery King was born prematurely in an emergency room. His mother gave him her family name, which was King, and the middle name Montgomery, because of the bus boycott in that city, led by a young Baptist minister not much older than she was, and with the same last name. Martin Luther King Jr. wasn't Deborah King's kinâher people lived in North Carolina, his in Atlantaâbut whenever she saw Dr. King she felt so proudly related to him that her heart beat like a great drum against her breast, and a wordless shout rushed uncontrollably out of her, so loudly that it frightened people.

Before Deborah King's son was taken off to the ICU, a nurse let her hold him. As the infant stared up at his mother, his cloudy eyes almost crossed in their fierce fight against confusion, she told him in an angry whisper, “Fight for me,” and she pressed her lips over his tiny lips and blew air hard into his tiny mouth. Then she kissed his hands, which were so diminutive they could not reach around the thin finger they clung to. So small was he that more than a month would pass before his aunt was allowed to bring him home. By then his mother had been transferred to a different ward in the hospital, where, fed Thorazine and Milltown, she sat listlessly in a chair by the window, unless the pills wore off, when she'd shout and flail at anyone who came near her.

The boy's aunt made an effort to call him Montgomery, but the syllables came out stiffly, like a reprimand, so in the end, by the time they moved to Philadelphia, everyone was calling him Kaye.

Everyone in Noelle's hometown of Moors, North Carolina, except the girl's father, called her Noni.

“Come on,” the stranger said from across the room. “Come look at this snow.”

Leaning out from the foot of her bed, she stared across at the boy who crouched in her opened window, snow flying in around him, the shiny bill of his red plaid cap turning from side to side as he looked into the large gabled bedroom, his arms braced over the sill.

“How did you get all the way up here?” she demanded. Notâshe would point out over the yearsânot “Who are you?” or “What do you want?” Just a practical question, “How did you get up on the second floor?” That's how unafraid she was.

“Climbed,” he said, thrusting head and snowy shoulders into her room. “Come on outside with me. It's Christmas.”

“Climbed what?” For Heaven's Hill was a large house, both tall and wide, with a Palladian center and two gabled wings. And while there was a full balcony with white columns running along the second floor to match the porch with white columns below, there were no outside stairs leading from one to the other. “You couldn't climb those columns.”

“Climbed your tree,” he said. “I can climb anything.”

Annoyed by his vaunt (as, all of their lives, she would be exasperated by his impenetrable confidence), the girl slid off the side of the high antique bed, and in her long nightgown hurried, chilled, across the cold pine floor. She could see that, inside his shambly brown wool car coat, the boy was even smaller than she was. And she could see that he was, as she'd been carefully taught to say rather than “colored,” a Negro. That realization immediately identified him for her, placed him in the world the way she knew it to be, a world in which there was only one possibility whereby a Negro child could be inside the gates of Heaven's Hill in the middle of the night. He'd come across from “Clayhome,” the white-frame house
across the lawn where her mother's maid lived with her invalid husband. The maid's family had lived there for generations, and their name was Clay, so at some point during the last hundred years their home had come to be called Clays' Home and then, as if it were one word, “Clayhome.”

“You live at Clayhome,” she told him. “You belong to Aunt Ma and Uncle Tatlock.”

Flinging himself over the sill and hopping down into her room, the boy threw back his thin chest and comically placed both red-mittened fists at his sides. “You know what? I belong to me, myself, and I.” He said it loudly, his grin so wide and infectious that she giggled herself, then quickly hid her face behind her hands because her mother had often told her that laughing with her mouth open was unbecoming and gave a poor impression of the laugher's background.

Pleased with her response, the boy strode into the room with long exaggerated steps and repeated in an even louder voice, “I belong to me, myself, and I.”