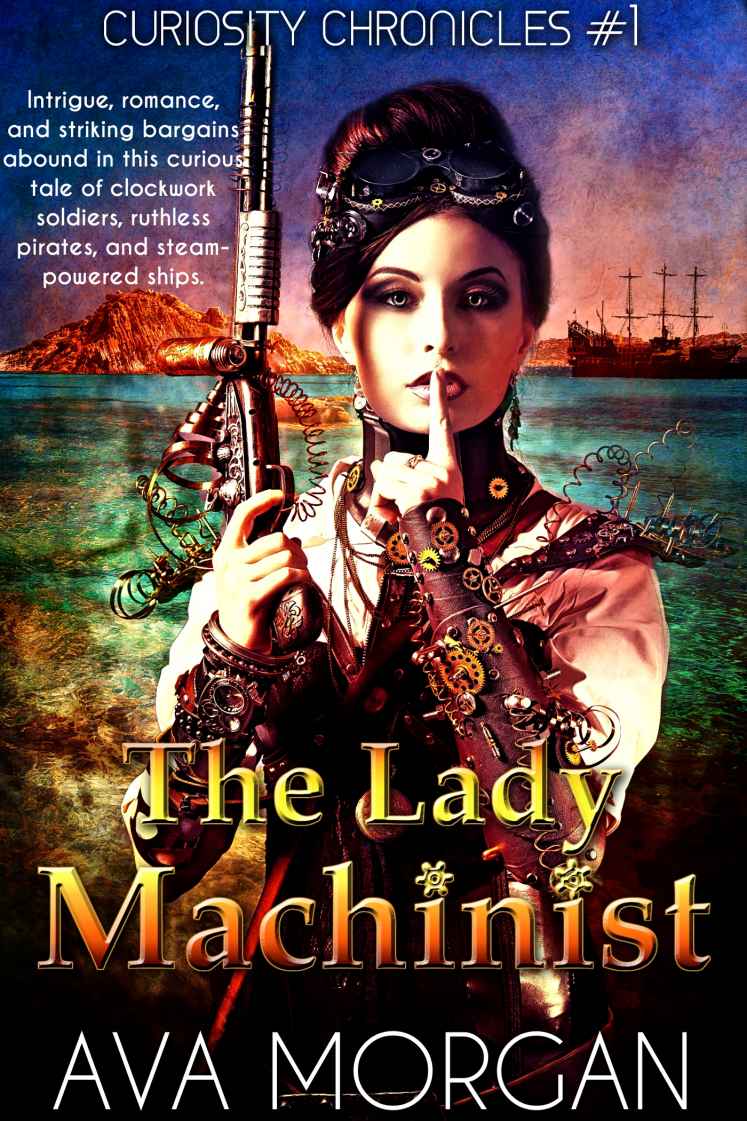 This book is a work of fiction. All characters, names, dialogue, incidents, and places either are the product of the author’s imagination or are used fictitiously. Any resemblance to actual events, locales, or people, living or dead, is entirely coincidental.

All rights reserved. No part of this book may be used, reproduced, scanned, or distributed in any printed or electronic form without the express written consent of the author. Piracy is illegal and is in violation of the author’s rights.

To my dear friend Ginger, who, during her lifetime, always loved a curious tale.

The Curiosity Chronicles series is set in a fictional world, similar to what our own past looked like in the 1830s-40s. Yet amid this age of rival empires and steam-driven industry, you are sure to notice a few differences. This series follows the agents of the Cabinet of Intellectual Curiosities (COIC), a group of brave men and women from very different walks of life who discover scientific feats, engineering marvels, and that most rewarding of findings, love. Pour yourself a cup of tea, sit back, and enjoy.

“Turn your ship around and go back where you came from.”

Despite her nervousness, Lydia Dimosthenis held her ground and stood on the beach, addressing the six foot-four inch captain and his crew of four armed British sailors. Five, counting the hasty brute who stormed into the Machinists’ Guild—pin-trigger blunderbuss at the ready—while they were in the middle of the weekly meeting.

Thank goodness her assistant, a clockwork soldier, was guarding the door that afternoon. The automaton’s iron alloy armor held up nicely against the blunderbuss’ smattering of grapeshot as she and her fellow machinists dove for cover.

“And take your spy with you.”

The seven-foot automaton bore the captured sailor in its brass-coated arms. Lydia raised her voice to her assistant and issued a command in her mother tongue of Greek. Upon hearing her order, it lifted the blond sailor and dumped him in the white sand approximately five paces from the captain’s polished black boots.

The captain didn’t so much as blink. He appraised Lydia with a confident stare, though the anger in his expression was clear. “My dear woman, call off your automaton and the ten standing behind you. Then perhaps we could sort out this misunderstanding.” His English carried a musical lilt, not at all like the coarse-sounding pirates from New Britannia who invaded the island weeks before.

But the British couldn’t be trusted. Not after that invasion. Those pirates ran from Lydia’s small army of mechanical and clockwork soldiers. She intended to send this giant of a man and his crew back on their way in similar fashion.

The crew trained their pistols on her. Although the captain’s gloved hands rested at his sides, sans weapons, he appeared unafraid. Sending him running away might be a more difficult objective to accomplish than she first thought.

She reverted to English, the common language of diplomacy and commerce throughout Europe and along the Mediterranean. “From where I stand, you’ve made your intentions clear. Your scout fired at me and three men with this.” She balanced the sailor’s blunderbuss under her arm. Her muscles compensated to support the heavy firearm. “You’re lucky no one was harmed.”

“The wench is wrong. I didn’t fire at anyone.” The sailor crawled nearer to his captain and pulled himself to his feet. “I shot at that automaton beside her. It raised an arm cannon at me.” He shook sand from his sweat-stained shirt.

Lydia defended her creation. “The automaton was guarding the entrance. You triggered it to attack when you blundered in with your blunderbuss.”

The captain’s baritone cut in before the blond sailor could counter. “Speaking of which, you can lower that weapon. My hands are empty.”

“Your crew’s hands aren’t.” Lydia kept her sights on them and drew more courage into her lungs. She and the automatons outnumbered the sailors two to one.

“You have my word that my crew won’t harm you. Weapons down, men.”

The brass buttons on the captain’s coat winked at her. “And what about your automatons?”

“They won’t fire unless I give the order.” Lydia hoped she could hold the sailors until King Sabba and his guards came from the palace. One of the machinists ran from the Guild to warn His Majesty.

“Did you fashion those automatons?” the captain asked. His rich, dark brown eyes lent warmth to a face with strong angles and commanding features. Not the face of a hard, harsh pirate, but not one of a man to be trifled with, either.

“I did.” She expected him to scoff and make some disparaging remark about female inventors.

Surprise did cross his face, but he moved to doff his hat. “You are the person I came to see. Rhys Cartret, ambassador of New Britannia and agent of the Cabinet of Intellectual Curiosities, at your service.”

That still didn’t explain why his crewman opened fire or why he sailed his ship to the remote side of the island instead of the port. Something wasn’t right.

“Why was there no official word preceding your arrival?” Lydia read his face for rapid blinking, flared nostrils, a nervous tic—any sign of falsehood.

His deep-set eyes, straight nose, and chiseled mouth belied none of those things, though a look of impatience flashed in his eyes. “I’ll be more than willing to explain the circumstances surrounding my arrival, but if you don’t mind, I’d prefer to do so without a blunderbuss pointed at me.”

Lydia cradled the firearm, despite her muscles cramping. “I do mind. The last British sailors to intrude upon our shores were pirates.”

“Lady Dimosthenis is correct.” Lydia heard the king’s booming voice behind her. Judging from the wary, widened eyes of the crew, she guessed that he brought the entire host of his guard with him.

King Sabba strode to her side, flanked by his adviser Nikolaos Abeiron and guards armed with muskets and sabers.

Rhys assessed the unusual predicament set before him. When he learned that his ship would be too large to make port at Aspasia’s tiny dock, he sent his navigator Finley to alert the local gentry of their presence.

And alert them he did.

Outnumbered and outgunned, Rhys faced a displeased monarch, a scowling official in red robes, twenty guardsmen armed to the teeth with double-barreled muskets and sharp sabers, and eleven automatons. Little good the pistol Rhys kept in his coat lining would do against this brood, even if the bullets inside the gun were metal-piercing.

And then there was the new wielder of Finley’s blunderbuss. Rhys’ gaze returned to the lone Aspasian woman the king referred to as Lady Dimosthenis.

She held that gun steady on Rhys, balancing it against her tall, lithe form. The hot island breeze blew sand on her clothing, which consisted of black trousers, white shirt, knee-length boots, engraved metal gauntlets on her forearms and a leather vest that was studded with an array of brass chains and toggles that cinched her waist. The corset-like effect of it provided the only ladylike touch to an otherwise masculine wardrobe.

The monarch and his official dressed in the traditional clothing that Rhys had seen on the Greek mainland. The official’s bright red robe and striped trousers distracted from his small build. The king’s white
fustanella
, pleated trousers, contrasted with the vibrant green of his wide-sleeved shirt and silk mantle. The mantle snapped in the wind.

“I am Sabba, King of Aspasia.” His English was thickly accented. He wore no crown, but a very simple and very solid band of gold that circled his forehead. “Why have you trespassed and fired upon my subjects?”

Lady Dimosthenis tilted her head, awaiting an answer. The hue of her hazel-gold eyes intensified as the sun hovered above. If it weren’t for the fact that she brandished a destructive firearm at his person, Rhys could appreciate the striking color against her brown olive skin. In this instance, however, her eyes reminded him of a great cat poised to claw if he wasn’t careful.

He descended into a diplomatic bow before the king. “Your Majesty, my name is Rhys Cartret, ambassador for New Britannia. Please forgive the actions of my crewman. The blame rests on me. I sent him to alert the dockworkers to our presence. Our ship was too large to make port.” He thumbed back at the three-masted ship
The Enlightened
languishing off the coast.

“A ship with steel and iron trimmings. That looks like a war vessel to me.” The red-robed official declared his observation in a quiet tenor. The tassel hanging from the golden cord of his hat fanned in the breeze.

“All ships need protection these days, but I assure you, it’s a merchant craft.” Rhys deflected from the fact that
The Enlightened
was outfitted to defend itself. The starboard side held eight automatic swivel cannons cleverly concealed by retracting iron screens, all powered by the onboard engine, the first steam-powered mechanism of its kind.

“Word reached New Britannia of the invasion. Reports told of pirates thwarted by iron soldiers. No one has been able to create automatons strong enough for warfare until now.”

The king glanced at Lady Dimosthenis. “Aspasia owes Lydia a debt of gratitude for her inventions.” His eyes turned cold once they settled again on Rhys. “Which is why I will not simply give them to you.”

Rhys saw Lady Dimosthenis’—Lydia’s—small, triumphant smile in his peripheral vision. He didn’t come all this way to give up his mission that easily.

“I know why you British are here.” King Sabba continued. “You want the automatons as weapons in your rivalry against France. We Aspasians are not so far removed that we are unaware of what takes place on the Continent. France will do anything to build an empire larger than yours.”

The king’s understanding of the current political climate left Rhys momentarily at a loss for words. That was the primary reason the COIC sent him to Aspasia posthaste. If not for the speed of
The Enlightened
’s engine, he was certain that the French would have already beaten him to it. “King Sabba, may I discuss this in a more private setting with you, your adviser, and Lady Dimosthenis?”

Lydia shook her head. Sable strands were pulled in a neat topknot pinned at the crown. “His Majesty just said he wouldn’t give you the automatons.”

“I will handle this,” the king reprimanded her.

Her dark lashes swept down in apology. “Yes, Your Majesty.”

Rhys studied her gesture. It seemed second nature, as though she had to apologize frequently for speaking out of turn. Part of him admired her boldness while the other became annoyed with her shooting down his objectives before he could even voice them. “King Sabba, I’m not asking you to give me the automatons. I want to buy them from you.”

The king, Lydia, and the adviser all looked at him. Even a few guardsmen cleared their throats. At last, he gained control of the conversation.

Sabba made a sound of disapproval. “Those automatons are our defense structure. They are not to be sold like cheap wares.”

“Certainly not. New Britannia has a proposal that I think you’ll find suitable.”

“I’ll be the judge of that. Bring your proposal to the palace. We will discuss it over supper.”

The king signaled for his guards. “Lord Abeiron will show you to a guest room in the palace. We dine in two hours.”

Ten guards escorted Sabba off the beach while the others remained with his adviser. Lydia’ eyes followed the king.

She didn’t speak a word as she turned to Rhys. Her eyes did the talking, and what they had to say wasn’t pleasant.

“I’m sorry for the disturbance at your Guild. My crewman will be disciplined.”

Finley hiccupped behind Rhys, but he pretended not to hear. “I’ll take his weapon off your hands.”