Read The Knight: A Tale from the High Kingdom Online

The Knight: A Tale from the High Kingdom 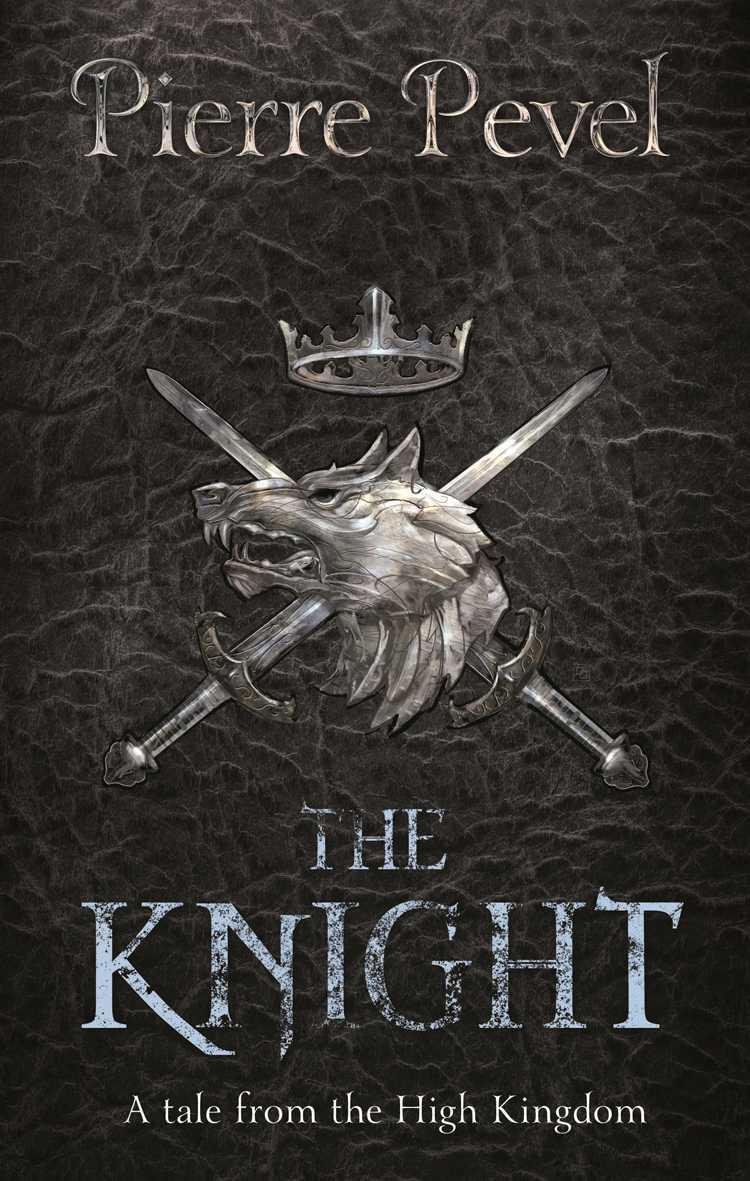 Praise for Pierre Pevel and
The Cardinal’s Blades
:

‘This is a swashbuckling novel packed with rooftop chases, back-alley swordfights, epic tavern brawls, clandestine roadside meetings in coaches and cool diplomatic exchanges between men of power where what is left unsaid can be as important as what is voiced … Overall,
The Cardinal’s Blades
is a rollicking good book, full of action, adventure, mystery and some quite delicious intrigue’
Wertzone

‘If you are looking for a swashbuckler, you won’t be disappointed with
The Cardinal’s Blades
, especially if you like your swashbuckling with a smattering of history’
Interzone

‘If I had to sum up
The Cardinal’s Blades
in two words, they would be: great fun. This is the France of Alexandre Dumas and Fanfan la Tulipe: a land of flashing blades and break-neck chases, beautiful women and gallant warriors, of masquerades and midnight plots and sword play’
Strange Horizons

‘A fantasy novel of depth and style … Thanks to Pevel’s eye for detail, swashbuckling action and characterisation this is something quite original’
SciFi Now

‘A fast-moving fantasy of swordplay, disguise and deception in the Paris of
The Three Musketeers
, with the blood of dragons splashed across the unforeseen consequences of follies and tragedies past. Dumas would surely approve and I loved it’ Juliet E. McKenna

For Dylan.
For Irma and for Pierre.

A Tale from the High Kingdom

Translated from the French by Tom Clegg

‘His name was Lorn Askarian. Some say he brought misfortune, while others claim that all was saved because of him. Through his veins ran the black blood of doomed heroes.’

Chronicles (The Book of the Knight with the Sword)

An ashen moon had risen above the capital of the duchies of Sarme and Vallence. Its light reflected off the surface of a lagoon whose black, shallow waters were criss-crossed by luminescent salamanders. It was summer and the Great Nebula filled the sky. The night was warm, stifling, invaded by the smell of sludge that emanated from the canals and crept even into the darkest and most secluded alleyways of Alencia’s old quarters. A lantern was burning at the end of one of those alleys. Surrounded by a ballet of insects, it illuminated a door upon which Lorn Askarian knocked with a leather-gloved fist. Ignorant of the fact that he would soon be paying a price for his loyalty, he had come to rescue a man whose life seemed to be worth more than his own. The panel set in the door slid open.

Knowing that the hood hid the upper portion of his face, Lorn lifted his head so his eyes could be seen. He waited, his hand placed on the pommel of his sword, a dark, still silhouette in the flickering light.

The panel snapped shut and the door opened.

Lorn entered, closely followed by a man who until then had remained in the recess of a doorway. About sixty years of age, Odric crossed the street as quickly as he could, clutching the fabric of his black cloak about his frail shoulders. As soon as he was inside he heaved a sigh of relief. Then he took in the greasy walls, the floor covered in thick filth, the smoke from the wretched yellow tallow candles and the ragged cloth split down the middle which passed for a curtain at the end of the hallway. Squalid, it was not the sort of place that the retainer of a prince of the blood usually frequented.

‘This … This can’t be the place,’ murmured the old servant in a worried voice.

Lorn did not reply.

One shoulder thrust out, the man who had opened the door twisted his neck to gaze up at the sky. He was tall and heavy, massively built, perfect for the post he held. He closed the door with a preoccupied air and automatically turned the key in the lock.

‘Still no storm,’ he grumbled.

‘That’s not the speciality of the house.’

‘Her name is Lidah. Do you know her?’

A hefty studded club tucked in his belt, the doorkeeper examined Lorn with a falsely indifferent eye. Lorn had just taken off his gloves but kept his hood up. His sword was a broad Skandish blade with a basket guard that enveloped the hand: a formidable weapon, but one that required skill to wield.

‘Well?’ Lorn insisted quietly. ‘Do you know her?’

Lorn had expected to play this little game. He had a silver coin ready, which he flipped into the air and the other man caught on the fly.

‘Lidah is here. What do you want with her?’

‘And him?’ the doorkeeper asked in an ironic tone, indicating Odric. ‘Does he want nothing from Lidah either?’

‘He doesn’t,’ confirmed Lorn without blinking.

The man shrugged before tugging on a cord that hung near the door.

A withered hand drew apart the curtain at the rear of the entrance hall, it belonged to a small dried-up woman wearing too much make-up, who bowed and waited, an obsequious smile upon her lips.

Behind the curtain, a stairway descended into the silent, malodorous shadows.

The pipe smoke was the colour of gold in some cases, of copper in others. It rose up and formed a ragged haze of shimmering red and yellow arabesques beneath the low vaults, lending the cellar a dim tawny light. It was hot in here. The air was heavy and the heady scent of kesh made the atmosphere quite oppressive.

Lorn had to stoop in order to enter. Straightening, he squinted and swept the room with his gaze, paying no heed to Madame Veld’s words. The different varieties of kesh resin that might be smoked here did not interest him. Nor did the nature and price of the other items on offer.

The old servant took out a purse from beneath the folds of his cloak and plucked three gold coins from it, which he slipped into the woman’s hand.

‘Thank you, madam. We … We will not be needing your services.’

Taken aback, Madame Veld fell silent and stared at Odric. Then her eyes widened as she saw the small fortune gathered in the palm of her hand.

Was he addressing Odric or Madame Veld? Left in doubt, the old servant stayed where he was and watched Lorn walk away with an uneasy eye. Their hostess was no longer smiling.

A series of narrow mats were aligned along the dirt floor. Some were assembled into groups of three or four, but most were isolated by veils behind which shadowy figures could be glimpsed, seated or lying down, prostrate or moaning, sometimes locked in an agitated sleep. Men armed with long clubs stood watch, for although kesh seldom provoked outbursts of violence, they were sometimes called upon to break up a quarrel, expel an undesirable individual, or discreetly carry away a corpse. These men also kept an eye on the adolescent girls who silently made their way from one mat to the next. They poured drink, rolled balls of resin, prepared and lit the pipes, replaced those grown cold. Although a hand might stray and brush against them, these girls did not offer other services. Kesh did not usually excite the senses, but for those who desired company there were some prostitutes waiting to be called.

Three of them were chatting in low voices beneath a dark lantern. Weary and sad, they perked up and smiled upon seeing Lorn approach and remove his cloak. They knew how to judge a man at a glance and they liked the look of this one. He was young, tall, broad-shouldered and attractive, with brown hair, hale skin and bright eyes. He exuded a self-confidence which inspired respect and his clothes were finely made. The quality of his shirt fabric was excellent and the same was true of the leather of his boots. As for the silver signet ring on his third finger, it seemed to possess a goodly weight.

The three whores were in for a disappointment, however.

The trio immediately lost all interest in him, although one of them deigned to enlighten him with a movement of her chin. Lorn glanced in the direction indicated and saw a young blonde woman coming towards them slowly, her hair slightly dishevelled, tightening the lacing of her bodice.

She noticed him in turn and frowned, looking apprehensive.

She relaxed slightly only to bridle again when he took her by the arm to draw her away from the others.

‘What do you want with me?’ she asked, freeing herself with a movement of her shoulder after they’d gone a few steps.

‘To speak with you.’

The prostitute thought it over, then lifted three fingers. So, three silver coins. A fortune, but Lorn paid it all the same. After which, he discreetly showed her a signet ring of gold and arcanium.

‘How did you obtain this ring?’

‘Your pimp resold it. Now, answer my question.’

‘It was a gift. Saarda had no right to take it from me. But I know it was one of those bitches who told him about it and she’ll get what’s coming to her.’

She gave the three other whores a venomous look. They had been watching Lorn and Lidah from the corner of their eyes and immediately pretended to take no notice.

‘But perhaps you know where I could find him …’

‘He’s in the alcove, over there. The one with the red curtain.’

Lorn felt himself seized by a mixture of hope and anxiety. He turned round. Closed off by thick draperies, he could make out five archways in the rear wall.

One of the curtains was scarlet.

‘I won’t have any trouble with Saarda, will I?’ asked Lidah.

‘No,’ replied Lorn in a distracted tone. ‘No, none.’ Then, perhaps realising he was making a false promise, he took off his own signet ring and gave it to the young woman. ‘Keep that, or bring it back tomorrow to the palace of the de Laurens if you want to change your life.’

Looking down at the ring cupped in her hands, Lidah was rigid in disbelief at the chance that had just been given to her. Was he really offering her a place in service to one of the richest and most powerful households in all of Sarme and Vallence?

She wanted to thank Lorn, but he had already turned away and was signalling Odric to go over to the red curtain. The servant immediately obeyed and crossed the room to join Lorn before the alcove Lidah had indicated.

Lorn paused for a moment before opening the curtain with a sharp jerk.

The Oath by Jeffrey Toobin
A Kingdom of Dreams by Judith McNaught
A Time of Dying (Araneae Nation) by Edwards, Hailey
Sky's Lark by Cheyenne Meadows
The Nine by Jeffrey Toobin
Gavin's Submissives by Sam Crescent
Masaryk Station (John Russell) by Downing, David
Broken Stone by Kelly Walker
Smittened by Jamie Farrell
A Tale for the Time Being by Ruth Ozeki