Read The Importance of Being Emma Online

The Importance of Being Emma 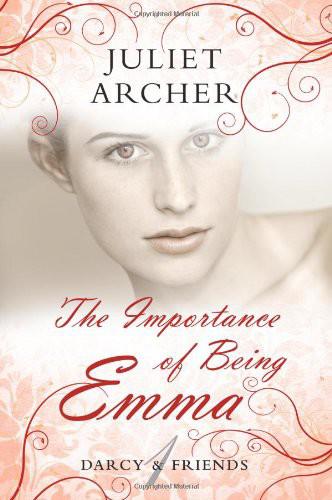 The Importance of Being Emma

The right of Juliet Archer to be identified as the Author of this Work has been asserted by her in accordance with the Copyright, Designs and Patents Act 1988.

All characters and events in this publication, other than those clearly in the public domain, are fictitious and any resemblance to actual persons, living or dead, is purely coincidental All rights reserved. No part of this publication may be reproduced, stored in a retrieval system, or transmitted in any form or by any means, electronic, mechanical, photocopying, recording or otherwise, without the prior permission of the publisher or a licence permitting restricted copying. In the UK such licences are issued by the Copyright Licensing Agency, 90 Tottenham Court Road, London, W1P 9HE

To the heroes in my life, especially Gordon, Bill, Tim and Mark.

A big thank you to:

Julia and Liz, for sharing the dream.

All my C19 friends who have given such encouraging feedback, especially Josephine, Kathryn, Mags, Sarah and ‘Edna’.

Lyn and the Choc Lit team.
My family, for their patience and support.

Naturally, nowhere else in England compares to Pemberley. But Ashridge, an estate in Hertfordshire that once belonged to the Duke of Bridgewater, is almost my second home.

Like Pemberley, it has an elegance of architecture and setting that helps me to think and talk more elegantly – or so I tell myself. Very appropriate, since it’s a world-renowned business school. And I’ll never forget my first visit there some years ago – not so much for the teaching, although the Leadership course I attended was exemplary, but for a conversation about a painting.

You see, I love art – whether expressed through words, music, or brush strokes on canvas. And Ashridge has a little gem by famous eighteenth-century portrait painter Sir Joshua Reynolds, entitled ‘A child asleep’. When I first saw it, I had no intention of having any children myself; where in the world was there a woman who would make me want that sort of commitment?

I now realise how much I had to learn.

Back then, however, there was only one child that this painting brought to mind: my sister Georgie. I was in my teens when she was born, and could remember her vividly – so happy and biddable. In that respect, she’d hardly changed …

‘
Yes.’ I tucked my hand in his as we crossed Donwell Abbey’s vast entrance hall, our footsteps drumming on the ancient stone flags. ‘Batty said the other day I looked a lot older than fourteen.’

A basic requirement, of course, for the girl lucky enough to partner Mark Knightley: twenty-five, tall, dark and handsome, and known among my older sister’s crowd as the Sex God.

He laughed. ‘Mary Bates says whatever she thinks you want to hear. Don’t be in a hurry to grow up, it’s not that great.’

And he gently disengaged his hand to open the oak front door. Outside, soft summer rain stained the garden paths and muffled the sounds of men and machinery from nearby fields.

‘
But you’ll take me?’ I went on. ‘I’ll get my braces removed, or maybe I’ll just smile enigmatically all evening, and I’ve seen the perfect dress in Kingston.’

He frowned and looked me straight in the eye. ‘I can’t,
it would be like taking my little sister.’

‘
You are, in a way. Your sister’s married to my brother.’

‘
I still think of you as my little sister.’

My eyes filled with tears. I turned away so that he couldn’t see, but it was too late. When he pulled me round to face him, I fixed my gaze on the floor.

‘
Mouse?’ He paused, then I heard his sharp intake of breath. ‘Oh God … You can’t possibly … You haven’t got a crush on me, have you?’

I said nothing, but my cheeks burned.

I pushed past him and ran through the rain, towards the bridle path and home. His voice trailed after me, encumbered by a rare note of entreaty.

But I didn’t. Not until a week or so later, when it was all over – both the ball, which he apparently enjoyed in the company of a giggly blonde, and the crush. No crush could survive such a rejection. The bluntness of a big brother, dismissively served. With a double helping of disbelief.

In any case, it was only a short-lived, typically teenage crush. My deeper, longer-lasting passion was for someone else. A man just as handsome, clever and rich as Mark Knightley but far more elusive. A true romantic hero, surrounded by almost myth-like mystery and spin.

Just his name set my pulses racing. Whenever I heard it, my heart fluttered in some sort of Pavlovian response. Whenever I said it aloud, in the privacy of my room, I punctuated it with a yearning sigh.

You see, although people talked about it each year as something inevitable, like Christmas, Flynn had never set foot in his father’s home town of Highbury. But nobody minded. His progress was still followed with unfailing enthusiasm, his arrival was always contemplated with breathless anticipation.

And from the age of ten I knew that I, Emma Woodhouse, was destined to become Mrs Emma Churchill. It was meant to be. Our lives were inextricably linked.

I never discussed these thoughts with anyone, of course. Especially Mark Knightley. He’d just laugh at me.

Some day my prince would come.

Good, the boardroom was deserted.

When I was a child, it filled me with awe; dark panelling, solid mahogany furniture, large leather-bound minute books and forbidding photographs of former Highbury Foods Board members, their names usually ending in Woodhouse. Now, although there were no obvious signs of change, it all looked the worse for wear; the photographs faded, the furniture scuffed.

I closed the door and selected a seat at the long table with care. I’d have more privacy here than in my own office, but I still wanted advance warning of anyone approaching.

I flicked through the magazine I’d brought with me and found what I was looking for on page thirty:

Change is in the air at Highbury Foods, one of the nation’s most traditional small companies, in the glamorous form of new Marketing Director Emma
Woodhouse. But has this enthusiastic novice bitten off more than she can chew?

Emma has everything going for her. She’s stunning, highly intelligent and wealthy beyond the wildest dreams of mere mortals, thanks to some shrewd property investment by her great-grandfather. She has one of the most sought-after addresses in England: Highbury. Not the old Arsenal football ground, but a picturesque and prestigious village in Surrey, where her family is well known for its charitable giving, courtesy of the Woodhouse Benevolent Trust. And, for someone whose life reeks of privilege and plenty, Emma seems refreshingly grateful for her good fortune.

Now, at only twenty-three, she has decided that the family business is in need of her talents. Her father Henry has run Highbury Foods along very conservative lines for two decades, following faithfully in the footsteps of previous generations. In fact, the company has had the same game plan for the last 52 years: supplying a range of non-perishable delicacies to upmarket homes and hotels via mail order. It has yet to discover the advantages of selling over the Internet and, until now, did not even see the need for a Marketing Director.

But Emma wants to drag the company into the 21st century and has set herself only twelve months to achieve this.

We say it’s mission impossible. Even with an MBA from Stanford, USA. But Ms Woodhouse says, ‘Watch this space.’

I threw the magazine down. They’d got it completely wrong; it was Harvard, not Stanford. Hadn’t that cretin of a journalist listened – or had he been too busy ogling my legs? He’d certainly chosen a photo that showed not much else; the angle suggested I’d ordered the photographer to grovel at my feet.

If I had, I couldn’t remember it.

I didn’t read on. It was the usual witless blurb they published in those glossy magazines that came with a couple of forests’ worth of Sunday papers. I should have guessed as much from the saucy headline, ‘Gentleman’s Relish’, a reference to the highly seasoned anchovy paste that was one of our most established and successful products.