CLASSICS
THE IDIOT
FYODOR MIKHAILOVICH DOSTOYEVSKY was born in Moscow in 1821, the second of a physician’s seven children. When he left his private boarding school in Moscow he studied from 1838 to 1843 at the Academy of Military Engineers in St Petersburg, graduating with officer’s rank. His first novel to be published,
Poor Folk
(1846), was a great success. In 1849 he was arrested and sentenced to death for participating in the ‘Petrashevsky circle’; he was reprieved at the last moment but sentenced to penal servitude, and until 1854 he lived in a convict prison at Omsk, Siberia. Out of this experience he wrote
The House of the Dead
(1860). In 1860 he began the review
Vremya (Time)
with his brother; in 1862 and 1863 he went abroad, where he strengthened his anti-European outlook, met Apollinaria Suslova, who was the model for many of his heroines, and gave way to his passion for gambling. In the following years he fell deeply in debt, but in 1867 he married Anna Grigoryevna Snitkina (his second wife), who helped to rescue him from his financial morass. They lived abroad for four years, then in 1873 he was invited to edit
Grazhdanin (The Citizen),
to which he contributed his
Diary of a Writer.
From 1876 the latter was issued separately and had a large circulation. In 1880 he delivered his famous address at the unveiling of Pushkin’s memorial in Moscow; he died six months later in 1881. Most of his important works were written after 1864:
Notes from Underground
(1864),
Crime and Punishment
(1865-6), The Gambler (1866),
The Idiot
(1868),
The Devils
(1871-2) and
The Brothers Karamazov
(1880).
DAVID McDUFF was born in 1945 and was educated at the University of Edinburgh. His publications comprise a large number of translations of foreign verse and prose, including poems by Joseph Brodsky and Tomas Venclova, as well as contemporary Scandinavian work;
Selected Poems
of Osip Mandelstam;
Complete Poems
of Edith Södergran; and
No I’m Not Afraid
by Irina Ratushinskaya. His first book of verse,
Words in Nature,
appeared in 1972. He has translated a number of nineteenth-century Russian prose works for the Penguin Classics series. These include Dostoyevsky’s
The Brothers Karamazov, The House of the Dead, Poor Folk and Other Stories
and
The Idiot
(2004), Tolstoy’s
The Kreutzer Sonata and Other Stories
and
The Sebastopol Sketches,
and Nikolai Leskov’s
Lady Macbeth of
Mtsensk. He has also translated Babel’s
Collected Stories
and Bely’s
Petersburg
for Penguin.
WILLIAM MILLS TODD III was educated at Dartmouth College, Oxfor
d University and Columbia University and is Harry Tuchman Levin Professor of Literature at Harvard University. He has published
The Familiar Letter as a Literary Genre in theAge of Pushkin
(1976),
Fiction and Society in the Age of Pushkin
(1986), and many art
icles on theory of narrative, sociology of literature and nineteenth-century fiction. 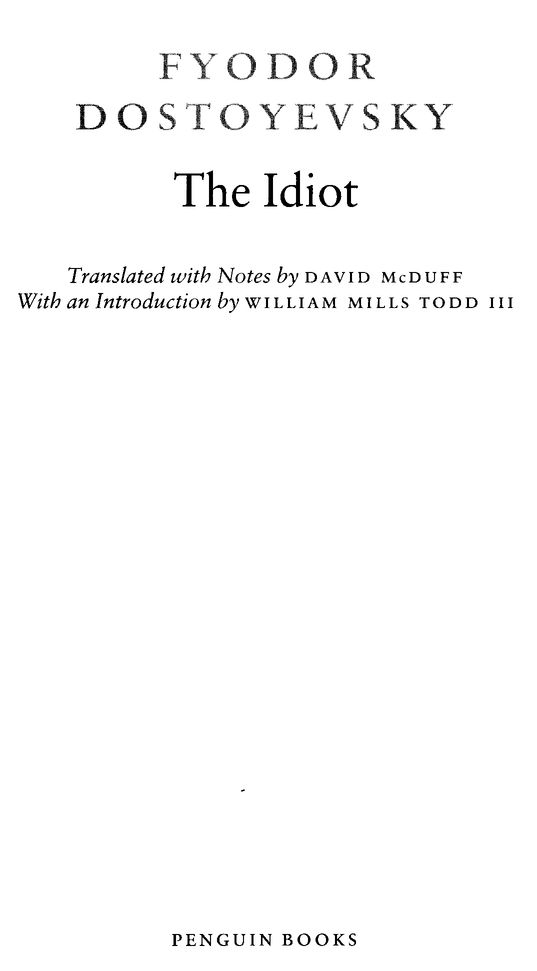 Penguin Books is committed to a sustainable future for our busi
ness, our readers and our planet.
The book in your hands is made from paper certified by the Fore
st Stewardship Council.

Chronology
1821 Born Fyodor Mikhailovich Dostoyevsky,
in Moscow, the son of Mikhail Andreyevich, head physician at Marlinsky Hospital for
the Poor, and Marya Fyodorovna, daughter of a merchant family.
1823 Pushkin begins
Eugene Onegin.
1825 Decembrist uprising.
1830 Revolt in the Polish provinces.
1831-6 Attends boarding schools in Moscow together with his brother Mikhail (b. 1820).
1837 Pushkin is killed in a duel.
Their mother dies and the brothers are sent to a preparatory school in St Petersburg.
1838 Enters the St Petersburg Academy of Military Engineers as an army cadet (Mikhail is not admitted to the Academy).
1839 Father dies, apparently murdered by his serfs on his estate.
1840 Lermontov’s
A Hero of Our Time.
1841 Obtains a commission. Early works, now lost, include two historical plays, ‘Mary Stuart’ and ‘Boris Godunov’.
1842 Gogol’s
Dead Souls.
Promoted to second lieutenant.
1843 Graduates from the Academy. Attached to St Petersburg Army Engineering Corps. Translates Balzac’s
Eugénie Grandet.
1844 Resigns his commission. Translates George Sand’s
La Dernière Aldini.
Works on
Poor Folk,
his first novel.
1845 Establishes a friendship with Russia’s most prominent and influential literary critic, the liberal Vissarion Belinsky, who praises
Poor Folk
and acclaims its author as Gogol’s successor.
1846
Poor
Folk and
The Double
published. While
Poor Folk
is widely praised,
The Double
is much less successful. ‘Mr Prokharchin’ also published. Utopian socialist M. V. Butashevich-Petrashevsky becomes an acquaintance.
1847Nervous ailments and the onset of epilepsy.
A Novel in Nine Letters
published, with a number of short stories including ‘The Landlady’, ‘Polzunkov’, ‘White Nights’ and ‘A Weak Heart’.
1848 Several short stories published, including ‘A Jealous Husband’ and ‘A Christmas Tree Party and a Wedding’.
1849
Netochka Nezvanova
published. Arrested and convicted of political offences against the Russian state. Sentenced to death, and taken out to Semyonovsky Square to be shot by firing squad, but reprieved moments before execution. Instead, sentenced to an indefinite period of exile in Siberia, to begin with eight years of penal servitude, later reduced to four years by Tsar Nicholas I.
1850 Prison and hard labour in Omsk, western Siberia.
1853 Outbreak of Crimean War.
Beginning of periodic epileptic seizures.
1854 Released from prison, but immediately sent to do compulsory military service as a private in the Seventh Line infantry battalion at Semipalatinsk, south-western Siberia. Friendship with Baron Wrangel, as a result of which he meets his future wife, Marya Dmitriyevna Isayeva.

Accepting (The Return of the Nine book 2) by Grace, Viola
When Grace Sings by Kim Vogel Sawyer
Billionaire Romance: Spencer's Obsession (A Seductive Alpha Billionaire Romance Book 1) by Kaycee Kline
Little Sister by Patricia MacDonald
Quicksilver by Amanda Quick
Deceive 2 (Book 2 of the Deceive series) by Karessa Mann
Jaylin's World by Brenda Hampton
The Grammarian by Annapurna Potluri
Ajax Penumbra 1969 (Kindle Single) by Sloan, Robin
To Have and to Hold by Patricia Gaffney