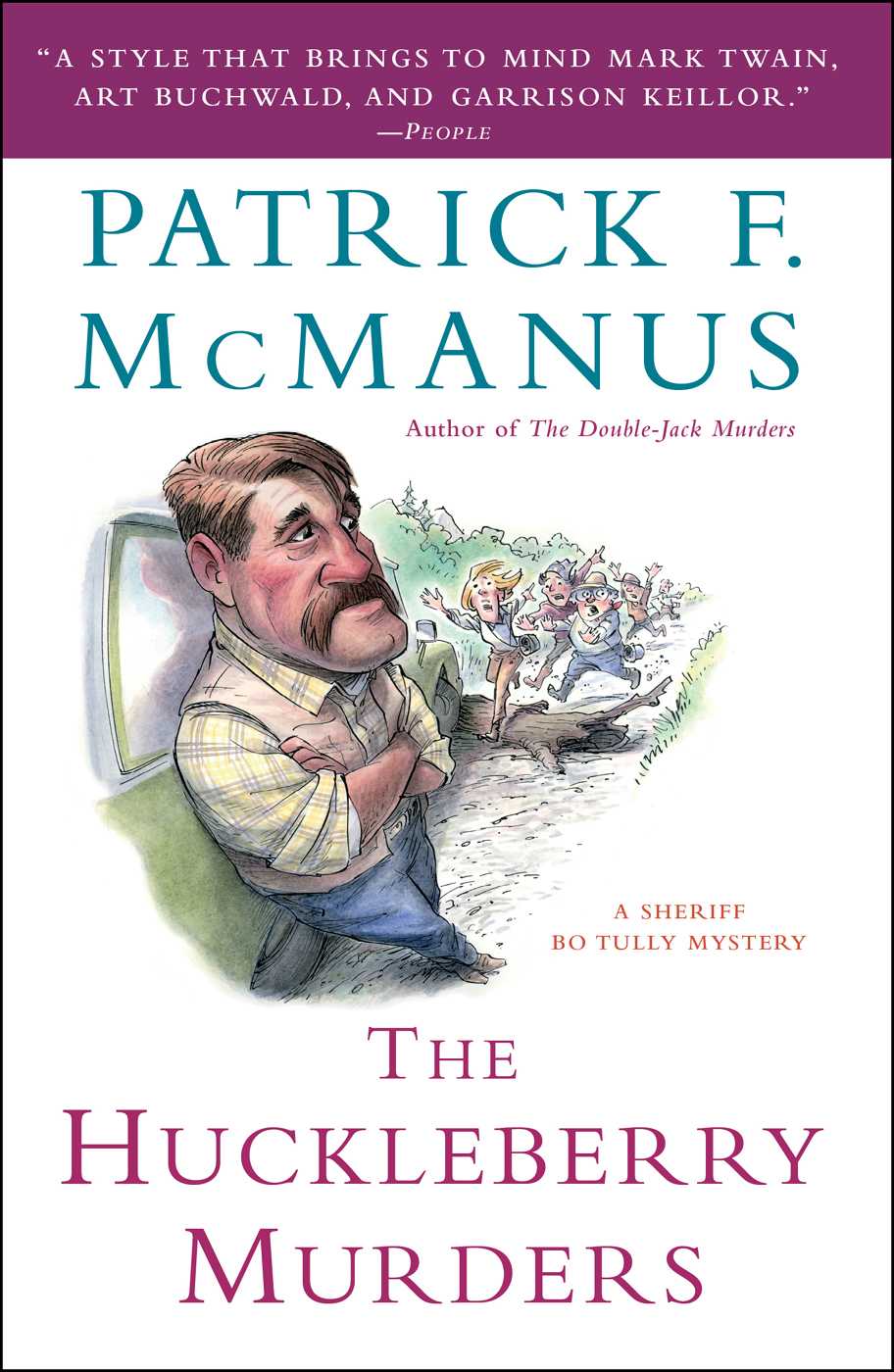 An Indie Next Notable pick for November 2010

“In McManus’s amusing, folksy fourth Bo Tully mystery . . . Tully once again proves an unorthodox and effective lawman, while McManus’s storytelling, be it about a haunted lake or a modern mountain man, never flags.”

“McManus’s folksy narrative keeps the reader’s interest with plenty of humor, aw-shucks moments, and action. . . . Bo Tully is a treat for readers who like some Western flair and an old-fashioned approach to justice in their mysteries.”

“[McManus’s] idiosyncratic characters and their lunatic ways are what make this folksy whodunit such fun to curl up with.”

“In Bo Tully, Patrick McManus gives us a man to watch.”

“One of the most entertaining mystery debuts in years.”

“Misdirection and understatement puts McManus in the Who’s Who of humor writers. . . . A highly entertaining read, and longtime McManus fans will not be disappointed.”

“Quirky characters and plenty of wit enliven this folksy mystery.”

“An engaging romp that recalls the best work of Bill DeAndrea.”

Thank you for downloading this Simon & Schuster eBook.

To my excellent agent, Phyllis Westberg

BLIGHT COUNTY, IDAHO, sheriff Bo Tully drove slowly up the long gravel driveway leading to the ranch house. September had already begun, and still every day the temperature climbed into the nineties. The threat of forest fires remained. A trickle of sweat beaded up on the tip of his nose. He wiped it off. One of these days he would get the air-conditioning fixed on the Explorer. So far that summer, Blight County had managed to escape any major fires, but the mountains were powder dry. Any spark could set them off. He didn’t want to think what would happen should a thunderstorm roll through. Or if his father, Pap Tully, went for a hike in the mountains smoking one of his hand-rolleds.

Tully was wearing his usual summer outfit of Levi’s, long-sleeve tattersall shirt open at the collar, three-thousand-dollar
alligator-hide cowboy boots, and a light khaki vest, which concealed the horizontal shoulder holster containing his 9 mm Colt Commander automatic. Today the gun seemed to weigh at least ten pounds. He preferred a lighter weapon, but criminals had become much more dangerous in recent years. He didn’t believe in shooting a criminal more than twice in the body mass—the so-called double tap.

A roofed porch spread across the front of the sprawling ranch house. A man sat in a rocking chair on the porch. He had the brim of a battered cowboy hat pulled low over his eyes. Tully couldn’t tell whether he was asleep or watching the vehicle approach. The man would know the red Ford Explorer belonged to law enforcement because of the light bar on the roof. He obviously was the alleged culprit the ranch owner’s ex-wife had complained about.

Tully stopped the Explorer in front of the house. The man pushed the brim of his hat up with his thumb and sauntered down to greet him. He took off his hat as he approached. He appeared to be in his early thirties, slender, nice-looking, a tidy person, with short hair, a trim mustache, and under his lower lip, a tiny bush of brown hair. Tully got out of his vehicle and walked around to meet him. He stuck out his hand and said, “Howdy, pardner, I’m Blight County sheriff Bo Tully.”

The man shook his hand. “Shucks, Sheriff, I know who you are. You’re the most famous person in all Blight County.”

“That tells you something about Blight County, doesn’t it? I take it you’re Ray Crockett.”

“Yep, that’s me, Sheriff. No doubt Marge Poulson told you how I done away with Orville.”

“She has indeed. Numerous times. So what do you have to say for yourself, Ray?”

Crockett scratched his head. “Well, let’s see. I have to admit I haven’t seen or heard from Orville in several months. His Social Security check arrives every month, and I mail it to a P.O. box in Spokane. Somebody picks up the checks—Orville, I suppose—and probably cashes them. That post office box would be pretty full by now if nobody picked up the checks.”

Crockett squinted up, as if looking for the answer in the sky. “Quite a while. Going on a couple of years.”

“You have an address or phone number for Orville?”

“Nope, I don’t. He travels a lot and stays in hotels. He used to call me every couple weeks or so, but now months go by I don’t hear from him.”

Crockett put his hat back on. “Not much, Sheriff. Orville lets me stay here free of charge to look after the ranch, but he sold off all the stock so there’s not much to look after. I helped him sell the stock and he gave me five percent of the gross. I put my share in a CD. Then my dad died and I got a bit of insurance money. That’s mostly what I’ve been living on.” He gestured toward the ranch house. “This is a nice place to live and I guess I’ll stay here till Orville tells me different
or my money runs out. I’m not one of those people consumed by ambition but lately I been thinking about taking some courses at the community college. Do something with my life.”

“You have a major in mind?”

“Never can tell when that might come in handy. So, any other plans, Ray?”

“Haven’t made up my mind yet. I guess I’ll stick on here until Marge gets on my nerves so much I can’t stand it. Small wonder Orville divorced her! Grab a seat up on the porch, Sheriff, and I’ll go fetch us each a beer.”

Tully pursed his lips, as if considering the offer. “Sounds mighty tempting, Ray, but I’ve got to get moving on. Give me the address of that Spokane mailbox, will you?”

“Sure thing. I have to go in the house to get it. My memory’s like a sieve.”

Tully looked around at the farm buildings. He made out a large boat in an open shed and behind it a barn that had probably once been cadmium red but now had faded with age into a weathered burnt sienna. No, that wasn’t quite it. Tully felt the urge to give up on law enforcement once and for all and start painting full-time.

Crockett returned with the mailbox address written down on a piece of blue-lined paper apparently torn out of a small notebook. He handed it to Tully.

“Thanks, Ray. I’ll check it out. Maybe that will satisfy
Marge and get her off my back. Maybe even off your back.”

“That would be nice.” Crockett’s thumb stroked the bit of fuzz under his lip. “If I can be of any more help, Sheriff, let me know. The next time Orville calls, I’ll have him get in touch. The last I heard from him, though, he said he was headed down to Mexico. I figure he must be having a pretty good time down there because I haven’t heard from him since.”

Tully nodded. “When was the last time you mailed his Social Security check to Spokane?”

“Just a couple days ago.”

“How old is he now, late sixties?”

“Sounds about right. He was in great shape the last time I saw him.”

“No, afraid not. Fishing is one of the few vices I’ve never tried. Why do you ask?”

Tully pointed at the boat.

“Oh, that. It belongs to Orville. He used to spend a lot of time out on Lake Blight. Said he knew the lake like the back of his hand. He was always bringing home messes of fish. Don’t ask what kind because I don’t know.”

“That’s about the biggest Boston Whaler I’ve ever seen. Looks like an outboard jet motor for power.”

“I don’t know one boat from another, Sheriff.”

“Well, thanks for your help, Ray. If you hear from Poulson, let me know.”

Tully got in his Explorer, drove around the circular drive, and headed back toward the highway, tugging thoughtfully on the corner of his mustache. In his rearview mirror he watched Crockett return to his chair and tilt the hat down over his eyes, apparently to resume his nap. He appeared to be a nice young man, polite, attentive, respectful. In other words, a classic sociopath. He lied as smoothly as if he were telling the truth. Marge was right. Ray killed the old man. The questions were, what did he do with the body, and how does he cash Orville’s Social Security checks?

A fly walked across the inside of his windshield. He decided to let it live. It could suffer in the heat along with him.

IT WAS NOW almost noon. He decided to swing by his mother’s house and see what she was making for lunch.

He rapped on her front door and then walked in. Katherine Rose McCarthy Tully O’Hare Tully Casey stuck her head out of the kitchen. “I’ve been expecting you, Bo. I made lunch for both of us. I’m still getting fresh tomatoes, so I made us BLTs and Campbell’s chicken noodle soup.”

“Sounds perfect.” As he walked toward the kitchen he noticed a framed, sepia-tinted wedding photo on an end table next to the sofa, Rose and his father, Pap. Tully had a hard time remembering his mother’s four marriages, two of them to his father, a former and much-feared sheriff of Blight County. Maybe Pap was back in her good graces.