The House of Grey- Volume 2 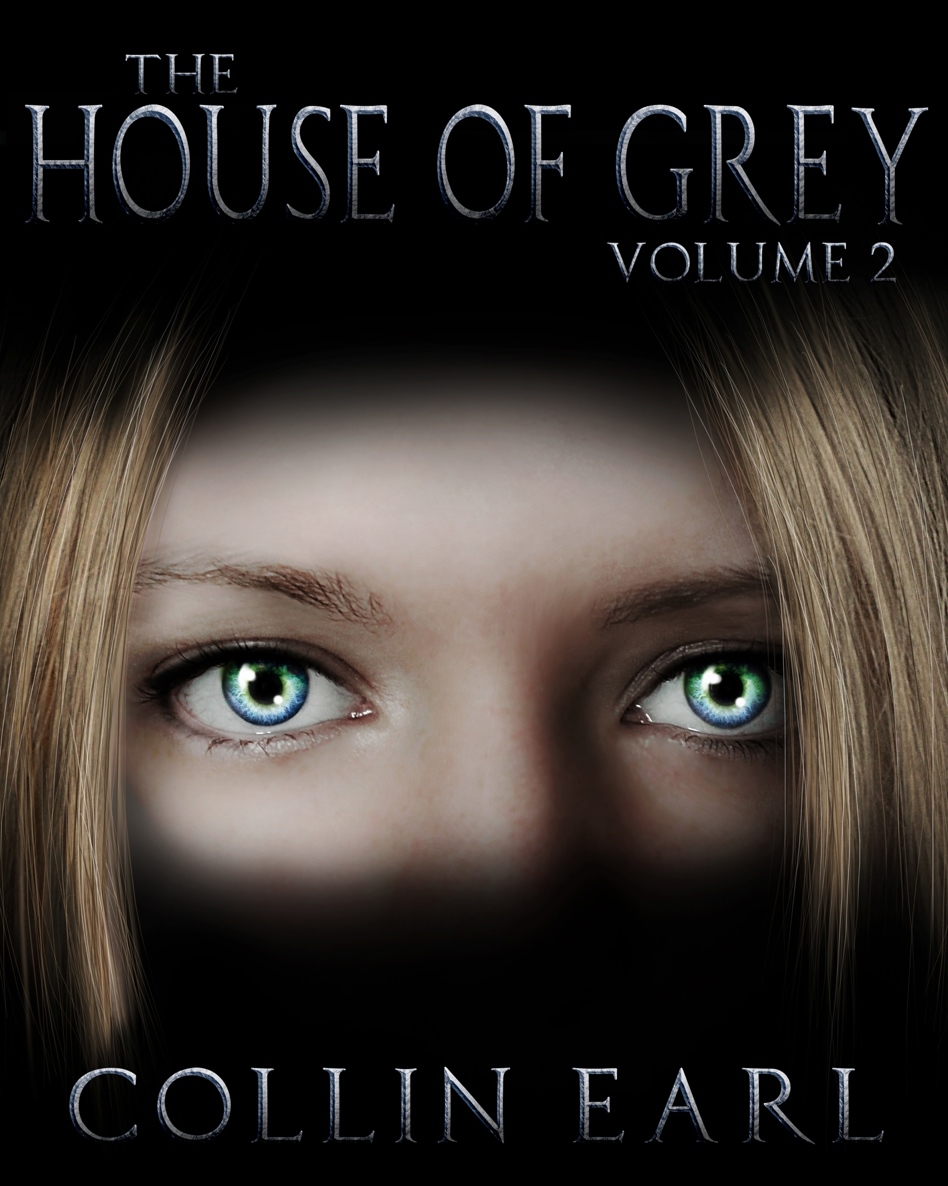 The House of Grey- Volume 2

This ebook is licensed for your personal enjoyment only. This ebook may not be re-sold
or given away to other people. If you would like to share this book with another person, please purchase an additional copy for each recipient. If you’re reading this book and did not purchase it, or it was not purchased for your use only, then please return to Kobo.com and purchase your own copy. Thank you for respecting the hard work of this author.

A message from the Author

Chapter 13- Beauty is a Beast

Chapter 22- Beaten with an Ugly Stick

Chapter 24- Not Just a Pretty Face

More books by the author

The House of Grey Volume 2 –

A Message from the Author

This story arc is more of what I had in mind for a certain character that made their appearance late in the original podcast. As such, this volume will reveal one of the major mysteries of the original story. As you know, however, mystery begets mystery in
The House of Grey
.

OK, I’m done. You can get to the story now. Enjoy the second volume of:

The House of Grey

Chapter 13 – Beauty is a Beast

A red mist encircled Casey. It was like the shadowy contrast when eyes look at a bright light for a long period, then close again. Monson gaped at the sight. What was this? Did he dare believe what he was seeing?

The palm of Casey’s hand was face-up and the mist was infusing it with color as it radiated energy. Casey opened his eyes. His eyes flared with light, the red mist engulfing his sockets completely.

Casey stared at Monson, eyes emblazed like a demon’s.

Monson felt fear ripple through him.  This couldn’t be happening. This was impossible.

“
Oh no….” were all Monson could muster. Casey released the gathered force and the ball of red energy exploded from his palm. The force threw Monson back several yards and he came down on the mat with a
thud
.

“
Told ya.” Casey sauntered over to Monson looking very pleased with himself, but tired as well.

“
Impossible,” Monson groaned, lying flat on his back. “How on earth did you do that?”

“
Sorry, tricks of the trade.”

“
I think you broke my back,” said Monson, gingerly touching it. He started to get up, but then thought better of it when his muscles started to strain. He felt totally embarrassed. He must have looked very uncool just then.

“
This is for real? I’m not dreaming?” Monson eyed Casey suspiciously. The misty light was gone and Casey was back to normal. Monson stretched a bit trying to feel the extent of the damage and seeing if there were any traces of the red mist.  But there was nothing around either him or Casey. What was going on?

“
Seriously Casey, how did you do that?” Monson asked again. If that was real, it was amazing. He had to know.  “How do you focus all that energy on your hand and then discharge it over empty space?”

Casey looked sharply down at Monson, cutting off any further questions.  “How did you know?”

“
How did you know that I was controlling energy and that it wasn’t just a normal punch?  That isn’t something you should know.”

“
Casey, you threw me twenty feet without even touching me! How is that a
normal
punch?”

Both boys jumped, which was a feat considering that Monson was still on the ground in pain. They turned to see who had startled them. Indigo Harrison stood nearby.

Indigo smiled and threw a stick to the ground. Monson saw it was a
bokken.

“
They want to know if you can fight for real.” Indigo pointed to a group of people on the other side of the mat. Among the group was the short fencer they had watched earlier, as well as Kylie Coremack.

“
Oh...I see,” said Casey, his eyes narrowing. Casey’s face grew angrier by the moment as he stared in Kylie’s direction. She turned away to talk to someone, however, and did not feel, or was just ignoring, the murderous eyes boring into the back of her head.

Casey picked up the hardwood
bokken
. It was longer than the one that Monson owned and a bit more angled. He stared over at both the fencer and Kylie with a scathing glare. He pointed at the
bokken
in his hands, making sure that the masked fighter acknowledged him. Monson and Indigo followed Casey over, people moving out of his way like he was Moses parting the Red Sea. Many of them appeared anxious as he passed.

Casey marched right up to the short fighter, scowling at the masked individual, who gave Casey a slight nod of the head and started towards the center of the mat.

A chill ran up Monson’s spine. It felt like the two were going to war.  Casey looked at Monson and gave him a little smile.

Oh no
, was the only thought that came to Monson’s mind.

He put it on as quick as he could manage, strapping it into place, and then slipped on a fencing mask. Once fitted, he took the
bokken
in a double-handed grip and pointed it away from his body towards the ground. The second fighter assumed a similar stance, flat-footed and squared up to Casey. Then, raising both arms and holding the mock sword by both hilt and tip horizontally in front of him, he displayed his weapon.  . It looked like he was offering the blade to a king as a gesture of fealty.  He gave Casey a slight bow, and then took up a slightly defensive stance, putting most of his weight on his back foot.

Both fighters surveyed one another as they slowly began to circle.   Casey struck first, confirming Monson’s suspicion that he would do so.  He thought this for two reasons. One, because Casey’s sword was longer, which would give him an advantage in attacking. And two, because, well…Monson still didn’t know Casey all that well, but he knew he was impatient.

Casey’s blow, a blazing overhead strike, barely nicked wood as the shorter fighter stepped back and away, merely flicking his wrist to deflect it. Casey's body language almost screamed his astonishment as the short fighter stepped forward, regaining the surrendered ground and settling back into the same defensive position. Casey renewed his attack, rushing forward with a combination of thrusts and fluid arcs more suited, in theory, to a saber or rapier than his mock Japanese long sword. His extremely agile opponent moved with fluidity and evasiveness. Curiously enough, Monson found himself watching his friend less and less and the shorter fighter more and more. Smaller than Casey and probably a lot weaker, considering Casey’s freakish strength, it was amazing that no matter what Casey did, he could not land even one blow. Whenever Casey seemed to get close enough, the other fighter seemed to move in just the right way to deflect or avoid his strikes.

Casey’s attacks and the other fighter’s parries continued, but escalated in seriousness. People were watching with fascination, Monson among them. The short fighter seemed rather popular among the crowd, yet Casey was putting on quite the show. It was beautiful. Monson inched his way to the very front of the impromptu circle of spectators.

Now much closer than before, Monson was able to see Casey’s expression ever so slightly as the mask covered most of his face. Monson did notice Casey’s eyes; their steely glints spoke volumes about his emotional state. Anger was intruding and dominating him. It was kind of scary to think about what could happen if Casey was pushed. He doubted anyone else noticed, but as the match progressed, Casey’s strikes were slowly becoming stronger, faster, and more frequent. Yet even in his controlled rage, the short fencer eluded him. Worse still than his evasiveness was the short fencer's unwillingness to throw even a single counterattack—not one.

Horror suddenly struck Monson. Unbelievable as it was, it was happening again. The misty, indistinct red light that tossed Monson to the ground before the match was beginning to gather at the base of Casey's feet and around his hands. This time, however, it was different as it rapidly condensed about him, infusing his arms and legs.

“
I’ve got to stop this,” said Monson to no one in particular, though he noticed that Artorius was now making his way over to the crowd. He yelled to Artorius, “He's going to—”

Whack!
Wood and armor collided. The short fighter finally counterattacked. Still in his pose, he was holding his sword in the space that would have been right at the base of Casey’s neck, were Casey still occupying the space.  But Casey hit the floor hard and looked a little punch drunk. Monson took in the scene, looking first at the short fighter and then at Casey; thankfully, the red light had dispersed, leaving no traces. Both Monson and Artorius rushed over to their friend, who was struggling to get back on his feet.

“
Sit down,” said Monson squatting down as he put a hand on Casey, almost pushing him back to the floor.  Casey grunted as he flopped back down and looked around for his sword. His opponent must have hit him harder than Monson thought.  “You're going to hurt yourself if you keep this up.”

“
Keep him sitting down,” said a soft, slightly musical voice. “I hit him between the shoulder and neck. That spot can mess up your equilibrium.”

“
Thanks,” said Monson, looking up at the short fighter. “You guys put on quite the show.” Monson stopped as the fighter removed his gloves to reveal small, manicured hands.

Monson stared at the hands. He looked up and faced the fighter. “I don’t mean to be rude, but who are you?”

“
Cyann! Cyann!” a small, girlish voice sang out. “That was amazing.”

Monson looked up to see Indigo Harrison smiling widely. He turned back, gazing more intently at the fencer.

“
Cyann?” he murmured through a mouth that he could feel dropping to the floor. No, it couldn’t be….

“
Cyann Harrison,” said the fighter, finally pulling off the mask. Monson and Artorius gasped, rather comically, as waves of raven black hair tumbled out over its owner’s head and shoulders.  The short fighter was… a girl, a really pretty girl.

A truly lovely face with high rounded cheekbones, a perfectly formed chin, and eyelashes that any woman would die for peered at Monson, Casey, and Artorius with bright sapphire eyes. The only flaw in this vision of natural perfection was the slight sadness behind it; as if she felt unhappy but found it difficult to articulate why. Monson was still unable to speak, but luckily, Artorius stepped in.

“
Ahh…dude, you just got your butt kicked by a chick. I gotta tell Mom about—
ouch
!”

Monson chuckled as Artorius held his head after a sharp smack from Cyann’s
bokken
.

“
You care to repeat that?”

“
Uh…no,” Artorius rubbed his head. “I think I got the picture.”