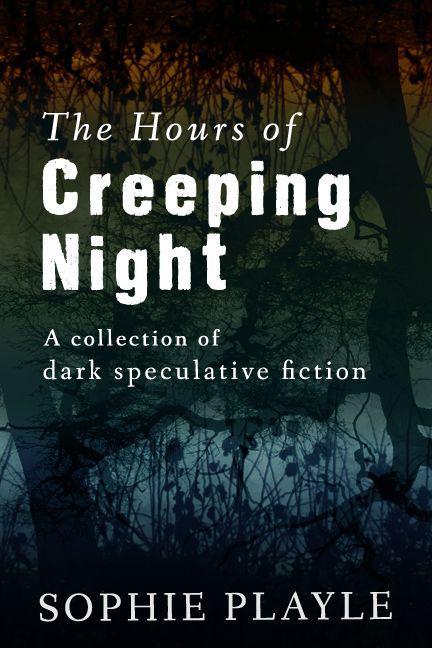 The Hours of Creeping Night

Thank you for purchasing this ebook. This ebook is licensed for your personal enjoyment only. It should not be re-sold or given away to other people. If you would like to share this book with another person, please purchase an additional copy for each recipient. Thank you for respecting the hard work of this author.

This is a work of fiction. The names, characters, places and incidences are products of the writer's imagination or have been used fictitiously.

This collection of dark speculative short stories was written over a span of seven years. The title,
The Hours of Creeping Night
, attempts to reflect the surrealism of the late hours of the night, when time is going slowly and the coming dawn feels like an impossible dream. These nine stories aim to encompass this tone, while exploring the darkness of human nature in various strange fictional worlds.

Suitable for an adult readership.

‘The beasts would love to be less beastly if only they knew how...’

Angela Carter, 'The Company of Wolves'

Falling Apart in the Match-Lit Dark

Bump in the Night

Falling
Apart in the Match-Lit Dark

V
ictor wasn’t born. He simply fell together. In the depths of a toxic junkyard, split pipes, busted toasters and keyless typewriters connected together, forming Victor’s child-sized body. With a marble for one eye and a cog for another, he blinked in the darkness. He flexed his coat-hanger fingers on his clock-face hands and dragged himself up to the world above. It took him all day to reach the surface, not because he was weak, but because an empty net dragged behind him, catching on bolts and wing-mirrors.

By the time Victor reached the surface, the green moon was high in the sky, half-hidden behind wisps of dull orange smog. The junkyard was a jagged sea of scribbles: silver highlights over rust-red shadows. The yard was fortified with tall buildings decorated with systematically placed squares of glowing yellow glass. Victor sat in a heap and tried to untangle himself from the netting, but his fingers were rusty and stiff, and the thin ropes seemed to reach inside him and entwine themselves into the inner workings of his body. Eventually, he let it be.

He clinked and clattered his way out of the junkyard and along the concrete streets towards the city, his knees cracking. He passed a sleeping man, hunched in a newspaper blanket, and as he did so, the net behind him became a little harder to drag though, looking back, Victor could see it had not snagged on anything. His rusty hands and feet tingled with numbness.

Loud shouts startled him. Three women stumbled around the street corner like newborn giraffes, bleating and wailing, swigging on cheap wine as they precariously balanced on high heeled shoes in animal print dresses. Victor pressed himself against the brick wall, their naked thighs wobbling past his face; one of the women leaned over and vomited next to him. Victor felt a churning in his stomach and a nauseating dizziness.

The screech of a near-by cat caused him to stumble in panic, and he fell to the ground with a clash. A police car roared past, sirens howling, tyres squealing and headlights blinding. Victor scampered into a dark alley, pulling desperately against the weight of the net.

As Victor walked through each neighbourhood, made his way down each occupied street and passed each person, the net began to swell and became heavier and heavier, until Victor could hardly pull it. A swarm of emotion crackled statically inside him, causing oily tears to stain his face, until he could bear no more. In his frantic clawing at the knotted twines, Victor stumbled and clattered all the way down a flight of stone steps, until he lay in a contorted heap at the bottom, the net wound tightly about his throat.

When Victor’s eyes flickered open he could feel a prickling sensation against his metal flesh as he lay against the net. But there was something new: a warm, comforting heat. He was no longer on the filthy concrete streets. There was soft carpet beneath his touch, and the glow of a fire illuminated the room in a gentle haze.

Victor sat up, clunking with effort. Before him stooped a man with a moustache so grey and thick it looked as solid as etched stone. His head was nothing more than a skull with too much skin draped over it, and he craned his neck forward as though his moustache weighed him down. The man made a clicking noise with his tongue as he removed his pipe from between his teeth. ‘Well I never,’ he said.

Victor trembled. He tried to speak, but the only noise he made was a computerised snarl.

‘Aggressive little thing, aren’t you? I thought you were broken when I found you piled outside my door. Thought someone might have thrown you away. You not got any buttons, so I didn’t know how to switch you on, see?’ The man stood up and sucked on his pipe.

A cat-shaped shadow rubbed itself against the old man’s leg. The man reached down to stroke it and the cat rose up to meet his hand, purring loudly. ‘Dinner time, is it?’ The man shuffled over to the other half of the room, which served as his kitchen, and put a saucer of milk and a bowl of tinned meat on the floor.

This simple gesture between a man and his cat caused a warmth to bloom deep within Victor’s typewriter chest, where the radiance of the fire could not reach. He stood up. The net felt a little lighter. He took a few steps towards the kitchen, placing his little hand against the buzzing refrigerator to steady himself. His fingers dislodged a photo from beneath a magnet and it skidded to the floor.

The man picked it up and studied it with brief familiarity. For the briefest of moments, the net fizzled against Victor’s metal flesh and he felt the most joyous sensation lift his heart. But then the muscles in the old man’s face loosened and drooped. ‘Judith,’ he sighed, placing the photo back on the fridge with a click of the magnet. ‘It’s just me and Ziggy here now.’ He looked down at Victor with a sad hollow light in his eyes. And just like that, the warmth in Victor’s chest extinguished and was replaced by a heavy ache. It felt as though he was being squeezed tightly from the inside; unable to breathe, unable to swallow. It felt as though something vital had been wrenched from him, turning life into a series of necessary motions – and nothing more.

It was too much. The net was heavier than ever and he scuttled towards the door, escaping back up the stone stairs one at a time, straining against the burden dragging behind him.

Victor clambered into an old skip and picked up a sharp piece of metal. Gripping it tightly, he hacked. He didn’t want it dragging him down anymore. Somewhere, in the back of Victor’s mind, he heard the roar of a giant engine grow steadily louder. A bright orange light flooded his vision, but he paid no heed. There was a loud clank and the skip shuddered. The twine began to split. Eventually, Victor cut right through it like an umbilical cord. And then everything went dark.

Once his focus adjusted, Victor realised he was once again in the junkyard. He lay twisted up inside an old doorless car, the windshield shattered and the front seat missing. Around him lay familiar junk – broken pieces of furniture, dusty rubble, scrap wires and old shelf brackets – that had been tipped out of the skip with him. He tried to sit up, but was tangled in the amputated netting, now limp and empty. There was a loud, mechanical noise; the vehicle shifted. A bright light blinded Victor and there was a loud boom as something hit the roof of the car. Victor was pulled upwards by an unseen force, but the tangled net held him down. The cog on his left eye came loose and flew upwards, attaching itself to the roof. Suddenly, the car was moving through the air. As it crashed down, the pull on Victor ceased, and his detached eye clinked downwards and lost itself inside the broken typewriter.

Victor reached for the door, but couldn’t move and soon gave up. As the sides of the car were crunched and compressed together, he did not struggle. He realised that he had severed the net too late; whatever it had been collecting was already harboured in his heart.

However, in the midst of the dark swelling in his breast, there was a tiny light. At the core of the city, cloaked in the pain of loss, there was something warm and beautiful. A tiny match illuminating an army of shadows. Yet the match would soon extinguish, and bright lights would be reduced to shadows. Victor tried to consider the worth of this light, but before he had a chance, his body was contorted in screaming metal.

D
ante had walked the world to find the Living Forest.  For fifteen years he had followed hearsay and local legend. And now, as he made his way through the undergrowth, he saw the trees shudder at the touch of his machete. The branches swept with panicked whispers. Just as Dante knew of the forest, the forest also knew of Dante from the voices carried on the wind.

Dante got straight to work. He collected fallen branches and made himself a shelter. The trees watched on, rustling with curious unease.

Once his hut was built, Dante sat by the stream and drank from his cupped hands. He picked up a stone, smoothed by the water’s caress, and began to sharpen his blade.

The sun was setting, but Dante still had work to do. He raised his machete. The trees trembled, the trees thrashed. He brought the sharpness down upon their limbs. The red sun bled into the horizon and the trees screamed.

On the second day, he remained in his dead-wood hut with his collection of severed tree limbs. His machete was propped up against the wall. Instead, he wielded a small whittling knife. He began to carve away at the wood, which whimpered in his hands.

Spring turned to summer, and the forest swelled with heat. Outside the hut, carved monstrosities were piled like firewood. Womanly curves, at odd angles and wrong proportions. Lopsided faces and stiff blocks of hair. Brittle and broken limbs interlocking. Faces in the mud.

When storm clouds gathered, rain filtered through the thick canopy of leaves and landed on the discarded carvings, the droplets running down the grooves in their faces.

This is the one
, Dante thought as he sat in his hut and listened to the rain. He stroked the wood with his knife. He laboured until the rain stopped, though he did not notice. And he continued to labour, until the rain evaporated and rejoined the clouds once again.

He’d learned from his mistakes. This time her limbs were correctly proportioned. Her curves were perfect. He spent the evenings lovingly polishing them until they were completely smooth.

One hot afternoon, he took her outside so that he could see more clearly in the bright sunlight. Her body was almost faultless – just the way he remembered her – and now all that was left was her face.

He pushed the blade over her chin, carving out the dimple he remembered so well. He refined her long nose, and sand-papered her cheeks. Then he took the point of the blade to her eyes, and carved in the sweeping lashes, the flecks in her irises, the pupils. As soon as he finished, she blinked.