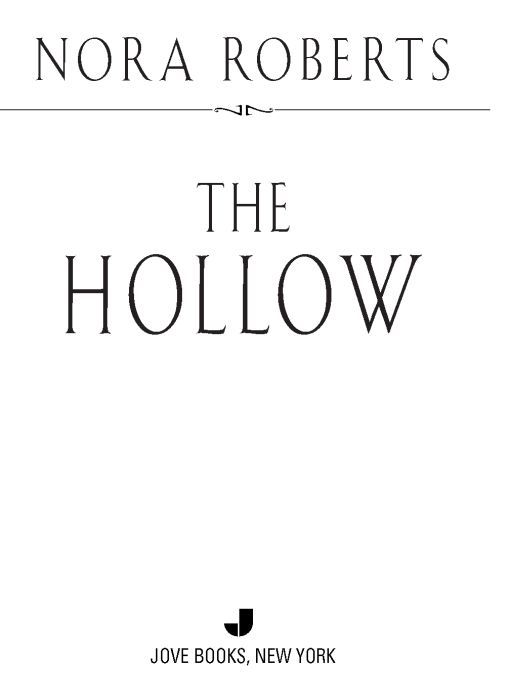 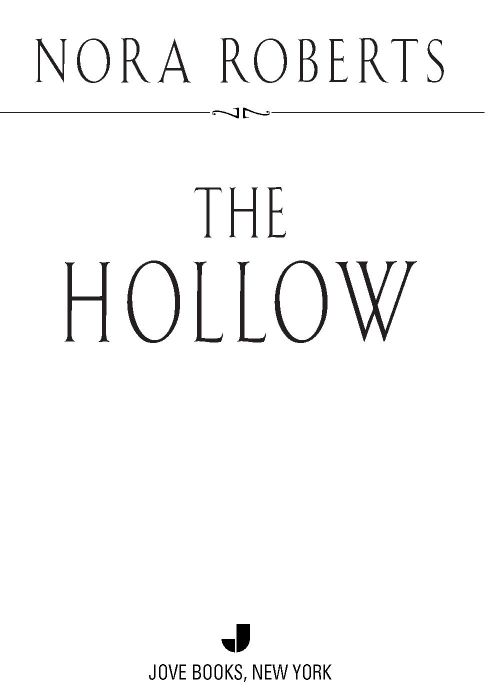 Title Page
Copyright Page
Dedication
Epigraph
One
Two
Three
Four
Five
Six
Seven
Eight
Nine
Ten
Eleven
Twelve
Thirteen
Fourteen
Fifteen
Sixteen
Seventeen
Eighteen
Nineteen
Twenty
Teaser chapter
For Fox, Caleb, Gage, and the other residents of Hawkins Hollow, the number seven portends doomâever since, as boys, they freed a demon trapped for centuries when their blood spilled upon the Pagan Stone . . .
Their innocent bonding ritual led to seven days of madness, every seven years. And now, as the dreaded seventh month looms before them, the men can feel the storm brewing. Already they are plagued by visions of death and destruction. But this year they are better prepared, joined in their battle by three women who have come to the Hollow. Layla, Quinn, and Cybil are somehow connected to the demon, just as the men are connected to the force that trapped it.
Since that fateful day at the Pagan Stone, town lawyer Fox has been able to see into others' minds, a talent he shares with Layla. He must earn her trust, because their link will help fight the darkness that threatens to engulf the town. But Layla is having trouble coming to terms with her newfound abilityâand with this intimate connection to Fox. She knows that once she opens her mind, she'll have no defense against the desire that threatens to consume them both . . .
Turn the page for a complete list of titles by Nora Roberts and J. D. Robb from The Berkley Publishing Group . . .
Nora Roberts
HOT ICE SACRED SINS BRAZEN VIRTUE SWEET REVENGE PUBLIC SECRETS GENUINE LIES CARNAL INNOCENCE DIVINE EVIL HONEST ILLUSIONS PRIVATE SCANDALS HIDDEN RICHES TRUE BETRAYALS MONTANA SKY
SANCTUARY HOMEPORT THE REEF RIVER'S END CAROLINA MOON THE VILLA MIDNIGHT BAYOU THREE FATES BIRTHRIGHT NORTHERN LIGHTS BLUE SMOKE ANGELS FALL HIGH NOON
Series
Born In Trilogy
BORN IN FIRE
BORN IN ICE
BORN IN SHAME
Dream Trilogy
DARING TO DREAM
HOLDING THE DREAM
FINDING THE DREAM
Chesapeake Bay Saga
SEA SWEPT
RISING TIDES
INNER HARBOR
CHESAPEAKE BLUE
Gallaghers of Ardmore Trilogy
JEWELS OF THE SUN
TEARS OF THE MOON
HEART OF THE SEA
Three Sisters Island Trilogy
DANCE UPON THE AIR
HEAVEN AND EARTH
FACE THE FIRE
Key Trilogy
KEY OF LIGHT
KEY OF KNOWLEDGE
KEY OF VALOR
In the Garden Trilogy
BLUE DAHLIA
BLACK ROSE
RED LILY
Circle Trilogy
MORRIGAN'S CROSS
DANCE OF THE GODS
VALLEY OF SILENCE
Sign of Seven Trilogy
BLOOD BROTHERS
THE HOLLOW
Nora Roberts & J. D. Robb
REMEMBER WHEN
J. D. Robb
NAKED IN DEATH
GLORY IN DEATH
IMMORTAL IN DEATH
RAPTURE IN DEATH
CEREMONY IN DEATH
VENGEANCE IN DEATH
HOLIDAY IN DEATH
CONSPIRACY IN DEATH
LOYALTY IN DEATH
WITNESS IN DEATH
JUDGMENT IN DEATH
BETRAYAL IN DEATH
SEDUCTION IN DEATH
REUNION IN DEATH
PURITY IN DEATH
PORTRAIT IN DEATH
IMITATION IN DEATH
DIVIDED IN DEATH
VISIONS IN DEATH
SURVIVOR IN DEATH
ORIGIN IN DEATH
MEMORY IN DEATH
BORN IN DEATH
INNOCENT IN DEATH
CREATION IN DEATH
Anthologies
FROM THE HEART
A LITTLE MAGIC
A LITTLE FATE
MOON SHADOWS
(with Jill Gregory, Ruth Ryan Langan, and Marianne Willman)
The Once Upon Series
(with Jill Gregory, Ruth Ryan Langan, and Marianne Willman)
ONCE UPON A CASTLE
ONCE UPON A STAR
ONCE UPON A DREAM
ONCE UPON A ROSE
ONCE UPON A KISS
ONCE UPON A MIDNIGHT
SILENT NIGHT
(with Susan Plunkett, Dee Holmes, and Claire Cross)
OUT OF THIS WORLD
(with Laurell K. Hamilton, Susan Krinard, and Maggie Shayne)
BUMP IN THE NIGHT
(with Mary Blayney, Ruth Ryan Langan, and Mary Kay McComas)
DEAD OF NIGHT
(with Mary Blayney, Ruth Ryan Langan, and Mary Kay McComas)
Also available . . .
THE OFFICIAL NORA ROBERTS COMPANION
(edited by Denise Little and Laura Hayden)
THE BERKLEY PUBLISHING GROUP
Published by the Penguin Group
Penguin Group (USA) Inc.
375 Hudson Street, New York, New York 10014, USA
Penguin Group (Canada), 90 Eglinton Avenue East, Suite 700, Toronto, Ontario M4P 2Y3, Canada
(a division of Pearson Penguin Canada Inc.)
Penguin Books Ltd., 80 Strand, London WC2R 0RL, England
Penguin Group Ireland, 25 St. Stephen's Green, Dublin 2, Ireland (a division of Penguin Books Ltd.)
Penguin Group (Australia), 250 Camberwell Road, Camberwell, Victoria 3124, Australia
(a division of Pearson Australia Group Pty. Ltd.)
Penguin Books India Pvt. Ltd., 11 Community Centre, Panchsheel Park, New Delhiâ110 017, India
Penguin Group (NZ), 67 Apollo Drive, Rosedale, North Shore 0632, New Zealand
(a division of Pearson New Zealand Ltd.)
Penguin Books (South Africa) (Pty.) Ltd., 24 Sturdee Avenue, Rosebank, Johannesburg 2196,
South Africa
Penguin Books Ltd., Registered Offices: 80 Strand, London WC2R 0RL, England
This is a work of fiction. Names, characters, places, and incidents either are the product of the author's imagination or are used fictitiously, and any resemblance to actual persons, living or dead, business establishments, events, or locales is entirely coincidental. The publisher does not have any control over and does not assume any responsibility for author or third-party websites or their content.
THE HOLLOW
A Jove Book / published by arrangement with the author
PRINTING HISTORY
Jove mass-market edition / May 2008
Copyright Â© 2008 by Nora Roberts.
All rights reserved.
No part of this book may be reproduced, scanned, or distributed in any printed or electronic form
without permission. Please do not participate in or encourage piracy of copyrighted materials in
violation of the author's rights. Purchase only authorized editions.
For information, address: The Berkley Publishing Group,
a division of Penguin Group (USA) Inc.,
375 Hudson Street, New York, New York 10014.
eISBN : 978-0-515-14459-8
JOVEÂ®
Jove Books are published by The Berkley Publishing Group,
a division of Penguin Group (USA) Inc.,
375 Hudson Street, New York, New York 10014.
JOVE is a registered trademark of Penguin Group (USA) Inc.
The “J” design is a trademark belonging to Penguin Group (USA) Inc.

In memory of my parents
Keep the home fires burning.
â LENA GUILBERT FORD
The natural flights of the human mind are not from pleasure to pleasure, but from hope to hope.
â SAMUEL JOHNSON
Prologue
Hawkins Hollow
June 1994
ON A BRIGHT SUMMER MORNING, A TEACUP poodle drowned in the Bestlers' backyard swimming pool. At first Lynne Bestler, who'd gone out to sneak in a solitary swim before her kids woke, thought it was a dead squirrel. Which would've been bad enough. But when she steeled herself to scoop out the tangle of fur with the net, she recognized her neighbor's beloved Marcell.
Squirrels generally didn't wear rhinestone collars.
Her shouts, and the splash as Lynne tossed the hapless dog, net and all, back into the pool, brought Lynne's husband rushing out in his boxers. Their mother's sobs, and their father's curses as he jumped in to grab the pole and tow the body to the side, woke the Bestler twins, who stood screaming in their matching My Little Pony nightgowns. Within moments, the backyard hysteria had neighbors hurrying to fences just as Bestler dragged himself and his burden out of the water. As, like many men, Bestler had developed an attachment to ancient underwear, the weight of the water was too much for the worn elastic.
So Bestler came out of his pool with a dead dog, and no boxers.
The bright summer morning in the little town of Hawkins Hollow began with shock, grief, farce, and drama.
Fox learned of Marcell's untimely death minutes after he stepped into Ma's Pantry to pick up a sixteen-ounce bottle of Coke and a couple of Slim Jims.
He'd copped a quick break from working with his father on a kitchen remodel down Main Street. Mrs. Larson wanted new countertops, cabinet doors, new floors, new paint. She called it freshening things up, and Fox called it a way to earn enough money to take Allyson Brendon out for pizza and the movies on Saturday night. He hoped to use that gateway to talk her into the backseat of his ancient VW Bug.
He didn't mind working with his dad. He hoped to hell he wouldn't spend the rest of his life swinging a hammer or running a power saw, but he didn't mind it. His father's company was always easy, and the job got Fox out of gardening and animal duty on their little farm. It also provided easy access to Cokes and Slim Jimsâtwo items that would never, never be found in the O'Dell-Barry household.
His mother ruled there.
So he heard about the dog from Susan Keefaffer, who rang up his purchases while a few people with nothing better to do on a June afternoon sat at the counter over coffee and gossip.
He didn't know Marcell, but Fox had a soft spot for animals, so he suffered a twist of grief for the unfortunate poodle. That was leavened somewhat by the idea of Mr. Bestler, whom he
did
know, standing “naked as a jaybird,” in Susan Keefaffer's words, beside his backyard pool.
While it made Fox sad to imagine some poor dog drowning in a swimming pool, he didn't connect itânot thenâto the nightmare he and his two closest friends had lived through seven years before.
He'd had a dream the night before, a dream of blood and fire, of voices chanting in a language he didn't understand. But then he'd watched a double feature of videosâ
Night of the Living Dead
and
The Texas Chainsaw Massacre
âwith his friends Cal and Gage.
He didn't connect a dead French poodle with the dream, or with what had burned through Hawkins Hollow for a week after his tenth birthday. After the night he and Cal and Gage had spent at the Pagan Stone in Hawkins Woodâand everything had changed for them, and for the Hollow.
In a few weeks he and Cal and Gage would all turn seventeen, and that was on his mind. Baltimore had a damn good chance at a pennant this year, so that was on his mind. He'd be going back to high school as a senior, which meant top of the food chain at last, and planning for college.
What occupied a sixteen-year-old boy was considerably different from what occupied a ten-year-old. Including rounding third and heading for home with Allyson Brendon.
So when he walked back down the street, a lean boy not quite beyond the gangly stage of adolescence, his dense brown hair tied back in a stubby tail, golden brown eyes shaded with Oakleys, it was, for him, just another ordinary day.
The town looked as it always did. Tidy, a little old-timey, with the old stone townhouses or shops, the painted porches, the high curbs. He glanced back over his shoulder toward the Bowl-a-Rama on the Square. It was the biggest building in town, and where Cal and Gage were both working.