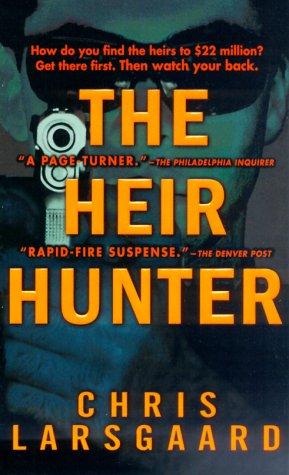 Praise for
THE HEIR HUNTER

“
The Heir Hunter
is a labyrinth: one way in, a hundred unexpected twists, and only one way out. A very cool and fast-paced novel. If you like your fiction a thrill-a-page, hunt no further than Chris Larsgaard.”

—David L. Robbins, author of
War of the Rats

“[AN] INGENIOUS THRILLER …
this fine debut novel oozes authenticity and provides a fascinating glimpse into the quixotic and dangerous realm of high-stakes assets recovery.”

“ENGROSSING …
The labyrinthine plot careens down a twisty path.”

“In
The Heir Hunter
, Chris Larsgaard has created that most unusual thing—a truly original, utterly compelling thriller. Once you’ve plunged into the murky and mysterious world of Nick Merchant, first-class heir hunter, you won’t come up for air until you’ve reached the final pulse-pounding page. This is a book you do not want to miss.”

“Chris Larsgaard has combined a wonderfully original premise with his natural gift for characterization to create a truly memorable debut. I’m looking forward to his next one.” 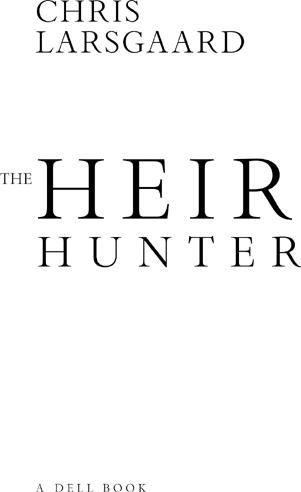 To my father and mother,
Bill and Carla Larsgaard,
5for everything

Many people are deserving of thanks for this book, but the following individuals were absolutely vital.

To my fantastic literary agent, Matt Bialer of the William Morris Agency, for his patience, wisdom, humor, and common sense. Thanks, buddy—only you know what we went through for this one. Also, thanks to Maya Perez for her great feedback and for being there from the start.

To my fabulous editor, Jackie Cantor, whose thoughtful guidance was crucial to literally everything. Thanks for making the work fun, Jackie.

To my brothers Bill and Matt for their essential critiques. To my cousin Tim for his support.

Lastly, my sincerest gratitude to the most important person of all: the amazing heir-hunting private investigator who, not surprisingly, wants to remain …

T
HEY HAD DECIDED
that the old man was crazy. Whether it was the onset of neurological disease or simply the inevitable effect of advancing years mattered little. Gerald Raymond Jacobs was eighty-seven years old and losing touch with his sensibilities. He was starting to talk, and talk too much, and they were very alarmed by this. They had instructed him several years ago on his final obligation—he was to remain silent until death. It was the simplest of instructions, but the old man was now refusing to abide by the rules, and this made him extremely dangerous.

The visitor sat patiently on the plush living room couch and tried to show a facade of attentiveness. He was thirty-eight years old with pale skin and reddish-brown hair, and his name was Malloy. For ten minutes straight, he had endured the old man’s ranting, but his patience had now run its course. Jacobs was speaking from his recliner, barely taking time to breathe as he delivered his latest rambling diatribe. It was clear he was dissatisfied with everything. His carrying on only confirmed what Malloy had been told: his mind was gone. At this point it was just as well.

“I have serious grievances,” said Jacobs once again, finally pausing to draw a noticeable breath. “And I’m tired of being lied to.”

“Well, that’s why we’re here, Mr. Jacobs,” replied Malloy soothingly, as if he were speaking to a child. “We want to fix things.”

“No, you wouldn’t,” snapped Jacobs. “I have new demands. To begin with, I’ll need more money. After everything I’ve given them, I’m entitled to it. Or perhaps they would prefer if I went to their newspapers. Is that what they want?”

Malloy clasped his hands together and had no answer. His assignment didn’t include knowing these things. He didn’t even know who this mysterious
they
were. He looked down at the thick Oriental rug at his feet—authentic undoubtedly. Everything in the living room—the chandelier, the grand piano, the fine antique furniture—screamed of opulence, of serious money. He studied old man Jacobs and realized he was genuinely curious as to who this arrogant little person really was.

“You don’t have to do anything drastic, Mr. Jacobs,” he finally ventured. “We’re going to work this out tonight. Here and now.”

Malloy nodded and listened to the muffled sound of the faucets running. The flowing water became clearly audible as Malloy watched his partner slowly step down the stairs into view. The man cut through the kitchen and suddenly appeared directly behind Jacobs. His name was Regnier, and he hadn’t said a word to the old man, which wasn’t unusual; he rarely said much to anyone. He was half a head shorter than his seated companion, but stocky. He held a heavy wooden cutting board in his thick, powerful hands.

“So,” continued Malloy, quickly now, “I want to make sure we understand where you’re coming from. You want more money and—”

“Enough of this. I want to meet with Taylor. He’s the only one who can help me.”

Regnier had silently stepped into position. His eyes flicked to Malloy’s and got the silent affirmation. He raised the board slightly, held it for a moment, and then with a sweeping arc slammed it against Jacobs’s head. The old man pitched forward with a groan and sprawled onto the coffee table in front of his seat.

Malloy was on his feet. The two of them converged upon the old man and carried him quickly across the rug to the stairway. Regnier led the way up, following the sound of the running water to the bathroom. The tub was sufficiently full. Malloy turned the knobs off and then began to unbutton the old man’s shirt.

“Help me with this.”

Regnier bent down with a grunt and removed the old man’s shoes and socks. He undid the trousers and pulled them off along with the underwear. They tossed the clothes to the corner in a heap.

Malloy stooped down to the crumpled, naked body. He hoisted the upper torso over the edge of the tub until the forehead dipped into the water. Red drops fell in a steady trickle from an oozing scalp wound. When the head was completely submerged, the body abruptly revived. The old man began to flail his arms and splash both men as they leaned their weight into him and kept his head beneath the surface. It was not difficult. The arm movements lasted only a few seconds, but they continued to hold him under for an additional minute. A bubbly ribbon of pale yellow bile rose up to the surface of the water.

When they were satisfied, they eased their grip on him and lifted the rest of the body into the tub, leaving it facedown in the now pinkish water. Malloy tossed a bar
of soap in with the corpse before they exited to the hallway.

They divided the house strategically, beginning with the garage. Their search took an hour and a half. It was nearly 11
P.M.
when the two men finally returned to their car and drove off into the night.

T
HE PIVOTAL MOMENT
of the negotiation had arrived, the point in the dialogue when pen was poised over contract. Nick Merchant studied his latest clients and felt his pulse drum at his temples. They were simple people, probably possessing no learning beyond the ninth grade, if that. They sat across from him—Emma McClure in her faded floral dress and house slippers, and her son, a greasy, yellow-toothed biker named J.P. They huddled on their worn living room couch looking like two expectant parents. Nick expected their reaction to his forthcoming disclosure to be on a par with being told they held the winning lottery ticket.

“Do you have any further questions, Mrs. McClure?”

Nick leaned over the table and pointed to the blank line that read
Client.
J.P. looked over his mother’s shoulder.

“I told you to hush, boy!” she hissed. “Don’t you be hanging over me like a vulture when I’m tryin’ to think.”

Nick searched his mental data bank for the few properly placed words that would sway Emma McClure to give her autograph. Twelve thousand dollars hovered like the
horseflies buzzing in the stagnant air of the McClure shack. He leaned forward and tried to speak soothingly. “You seem a bit unsure, Mrs. McClure. Is something unclear?”

“Well, it’s just that . . . well, things like this don’t usually happen around here.”

“I understand,” said Nick, with a smile. “I know this all seems a little strange. Do you have a copy of the yellow pages by chance? I’d like to show you something which may reassure you.”

J.P. rose from the couch at his mother’s prompting and returned with the phone book. Nick took it and flipped through it till he came to the heading Private Investigators.

“Here we are—Merchant and Associates. Our firm is a completely legitimate, family-owned business. We’ve been licensed by the state of California as private investigators for the last twelve years now. Our reputation in the field is excellent. If you’d like to check into us, you can call the local Better Business Bureau. I’m sure they would be happy to tell you all about us. I encourage you to do that if it will ease your mind.”

“You pipe down!” she snapped. She turned to Nick. “I don’t think I’ll be needing to call ’em. I believe I can trust you, Mr. Merchant. You say your family owns this business?”

Nick shifted in his chair a bit. He didn’t want to lie to the old woman, but he felt it was best to shield her from the complete truth. “My father started the company, ma’am. He retired four years ago.”

Emma looked over at her son. “I suppose a family-owned business couldn’t be all bad, huh, J.P.?”

Nick nodded earnestly. “Ma’am, I promise you—there’s nothing to be worried about. I wouldn’t come into
your home and lie to you. I guarantee you’ll be very happy once you sign.” He directed her gaze to the line requiring her endorsement.

Mrs. McClure frowned. Her life had never been complicated by important matters such as this, but Nick Merchant had a boyish, honest face, and even though she hadn’t been brave enough to admit to him that she didn’t really understand half the things he had explained to her that past half hour, she did feel that she could trust him. She gave J.P. one last uncertain look and, seeing nothing but encouragement on his face, scrawled her signature across the line. She handed Nick the contract and his pen and sighed.

Nick glanced over the signature and felt his saliva glands finally start working again. “Thank you, Mrs. McClure, and congratulations. This is a happy day for the two of you.” He placed the contract into the folds of his portfolio. “I’d like to give you the details on your inheritance now.”