Read The Hearse You Came in On Online

The Hearse You Came in On 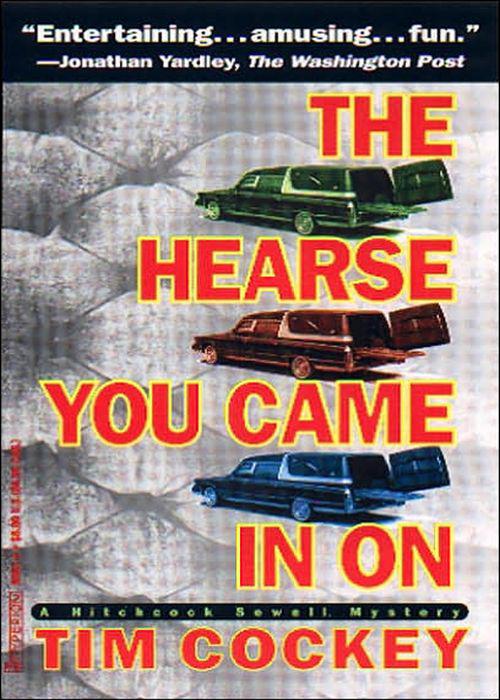 THE
HEARSE
YOU CAME IN ON

IN MEMORY OF
TEDDY HARTMAN

who would have
laughed the loudest.

I
was going along just fine, solemnly chaperoning the dead into their graves and pretty much otherwise minding my own business, when the woman calling herself Carolyn James stuck her halfway-pretty face into my life and scattered all hell to the wind.

Of course that’s the way life works, isn’t it. They say something as simple as a well-placed sneeze by the right person at just the right moment can change the course of history. I can believe that. Life is funny that way. My ex-wife is a born-again Buddhist (among several other provocative things), and she likens the course of life to one long stumbling forward. The quality of the life, Julia says, is a matter of how adroitly you negotiate the ten thousand obstacles that come into your path as you stumble along. At the end of life, of course … you
will
finally fall down. Can’t avoid it. The final stumble. Now I don’t happen to think that this is necessarily certified Buddhist rhetoric, but why split hairs. It gets the point across.

And
my
point is simply that I was stumbling along just fine in my little old life when with no warning whatsoever an obstacle in a tennis dress and a baggy
sweater stepped in front of me and put my adroitness to the test. It might not have been the sneeze that changed the world, but it sure as hell pitched me forward, I can tell you that.

I’m thirty-four years old and six foot three. That’s way too young to fall down. And way too far to drop.

On this particular day of my stumbling forward—it was a Wednesday, it was May—Aunt Billie and I were holding a wake in Parlor One. The funeral home that I operate with my aunt is located in a section of Baltimore known as Fells Point. It’s an area where I spent most of my so-called formative years, a largely working-class neighborhood that hugs a jagged corner of the Baltimore harbor just a mile or so east of the downtown. Our establishment is several blocks in from the harbor itself, down past the string of small shops and bars that line the waterfront there. As somebody is always bringing up the irony of our being just a stone’s throw from a bar called The Dead End Saloon—which is the last bar on the stretch—I’ll bring it up now. No, we’re not affiliated. We were here first. My ugly Uncle Stu started the business soon after World War II, where he saw considerable action, including the god-awful Normandy invasion. Although one might conjecture that the idea of becoming a mortician was some sort of cathartic response to the horrific sight of so many bodies lying about, the truth is considerably less psychological. According to family legend, ugly Uncle Stu’s decision came after he was handed the bill for his father’s funeral. Whether as a hedge against having to pay through the nose for his own eventual interment or just as a nifty new way to turn a buck, family legend
vacillates. Despite the fact that my aunt and uncle were childless, they named their establishment Sewell & Sons Family Funeral Home. This was Billie’s idea. She was the one who injected into the business the much needed “warm and fuzzy”that my uncle sorely lacked.

We’re a remarkably nondescript establishment on a remarkably nondescript block of largely—yes—nondescript formstone row houses. You could be leaning up against the wall of Sewell & Sons smoking a cigarette and not even realize that you’re standing in front of a funeral home. We’re a modest operation, with two parlors and two full-time employees, myself and Aunt Billie. We’re both certified morticians, which means we’re licensed to do all the things with the bodies that most people don’t want to hear about. Billie is a refugee from Old South aristocracy, and she maintains that strata’s peculiar relationship with death, which I feel is generally more congenial and accommodating than you find elsewhere. And as Billie had a fair hand in raising me, a good share of her influence has seeped into me. It’s this convivial relationship with death, I think, that sets Sewell & Sons apart from the competition. This, plus Billie’s standing offer of brandy to our guests.

Our dead guest of honor this particular day was a retired firefighter from Towson, which is just north of the city. He had died of natural causes—if a heart attack is a natural cause—and his widow had informed Aunt Billie that he would be drawing a modest-sized crowd. There’s a hard plastic curtain on runners that divides the two parlors. On those occasions when we expect an overflow crowd, we pull the curtain open to create one large room. The wake for my parents for
example.
That
had been a big turnout. A standing-room-only affair. This one wasn’t.

Aunt Billie was handling the fireman’s funeral. We trade off. I was sitting in my office just off the front lobby, feet up on my desk, reading the obituaries (kidding). Actually, I was reading a copy of the Thornton Wilder play
Our Town
and for reasons that I’ll explain later, I was in a cranky mood. And a restless one. I had probably picked the play up and set it down and sighed and then picked it back up again (down again, sigh again) about a dozen times already before I finally just tossed the damn thing aside and decided to check out the action in Parlor One.

The joint was jumping. Seniors and semi-seniors (what Billie and I call “Aarpies”) were milling about the room, clustering here and there, speaking in low voices, cupping one another’s hands and very studiously avoiding the guest of honor—Mr. Weatherby—who was off at the far end of the room laid out in his coffin (the Embassy model; very popular), as dead as dead could be. My cranky countenance wouldn’t do here so I re-set my face and moved solicitously about the room. I think I’ve mentioned already that I’m a handsome fellow. If not, I’m mentioning it now. Black hair. Blue eyes. Dynamite chin. I’ve been told that I look like one of those TV doctors who are constantly mixing it up with his attractive patients. It’s a fantastic face for this profession. Puts people at ease. If I had a nickel for every “you don’t look like an undertaker”I’ve heard I’d tell Donald Trump he can stop shining my shoes now and get back to whatever he was up to before I hired him.

I worked the room, squeezed a few hands and was
assured each time that the retired firefighter had been “a good man.”That’s pretty standard. It’s only the occasional live wire who sidles up to tell you that the recently deceased was a no-good son of a bitch.

I spotted Billie off in a corner with Mrs. Weatherby, her blue hands oyster-shelled over the widow’s paw, her Helen Hayes smile roaring full blast. As I headed over to offer my condolences to Mrs. Weatherby, Billie looked up and saw me coming. She gave me her Boris Karloff face—which is Billie’s signal to me that I’m scowling too much—then jerked her head in the direction of the coffin. There, partially obscured by a huge horseshoe of gladiolus (compliments of Weatherby’s old fire station), stood a woman. Not an Aarpy, but a woman in her early thirties. She was tall, about five nine or ten. She was dressed in an oversized navy blue sweater and a short short short white pleated skirt from which a very nice pair of matching legs extended several miles down into a plain white pair of tennis shoes. Women’s size eight, I’d say. White anklets with rabbit tails completed the portrait. De rigueur garb for a wake, no question about it. Her hair—coal black with a touch of cranberry—fell in unbrushed waves to her shoulders and at the moment was obscuring her face. One hand was resting lightly on the foot of the coffin. The other hand was rising up toward the hidden face as a shudder suddenly went through her shoulders … and she sneezed.

Allergies, she would tell me later. To flowers and to death.

She looked up as I approached. No. That’s not quite right. What she did was she flicked her head, like someone
who has just heard a gun go off, and she nailed me with a pair of hot hazel eyes. I nearly tripped on a piece of air. The look that she was giving me was somewhere between that of the deer in the crosshairs and the one holding the rifle. She had a somewhat heart shaped face, a pointed chin, a smallish red mouth and a terrifically sexy Roman nose. The eyes were deeply set, large and currently mistrusting. Because I’m tall and she was tall I took a nanosecond to imagine the two of us happily married and raising a batch of tall mistrusting children together. Then I held out my hand and introduced myself.

She inspected my face for a second and then gave me her hand. The one from the coffin, not the one she had just sneezed into.

Which of course I’ve heard a thousand times before.

Color flashed across her cheeks like lightning just below the surface and she wavered slightly, holding on to my hand a fraction too long, to steady herself. The mother of my future tall mistrusting children had been drinking. She let go of my hand and looked down at Mr. Weatherby.

“Did you know him well?”I asked.

The woman shook her head.

“I’ve never seen him before in my life,” she announced. There was a touch of defiance in her tone, as well as in the way she squared off in front of me. Her eyes flittered around the room. “Is that his wife?”

Aunt Billie was still jawing with Mrs. Weatherby over by the plastic curtain. They had been joined by an animated ostrich with Coke-bottle glasses who was apparently taking her tongue out for a walk.

“I have to say something.”

“Of course it’s necessary. I can’t just wander in and wander out like I own the place. It’s a funeral.”

“You know what I mean.” She looked over toward the door. “Can you get me out of here?”

She took a steadying step forward. At least that was the idea. Her shoulder grazed the horseshoe bouquet and we both snatched at it to keep it from toppling. I reached for her elbow. Instinctively, she drew back.

“But you
are
a little unsteady.” She tried to glare at me, but apparently her fire was going out.

She sounded defeated. “I haven’t had a good day.”

“If it means anything,” I said diplomatically, “I haven’t either. What say we scram.” I held out my arm. I’m a sucker for cheap theatrics sometimes, I readily admit it. She hesitated. “It’s an arm,” I pointed out. “It won’t bite.”