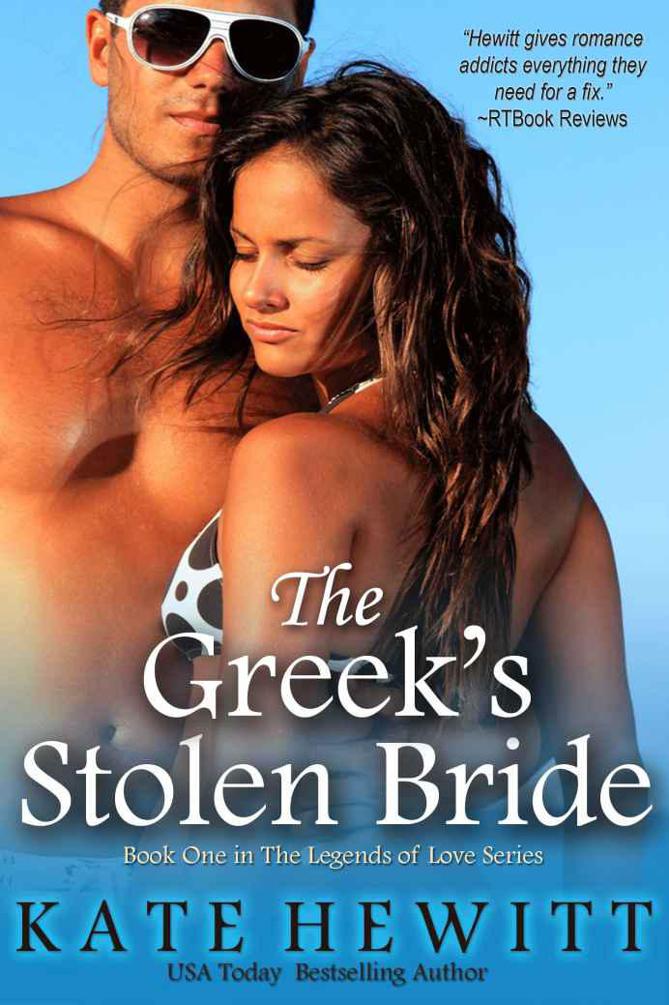 This ebook is licensed for your personal enjoyment only. This ebook may not be re-sold or given away to other people. If you would like to share this book with another person, please purchase an additional copy for each person. If you’re reading this book and did not purchase it, or it was not purchased for your use only, please delete it and purchase your own copy. Thank you for respecting the hard work of this author. To obtain permission to excerpt portions of the text, please contact the author at
[email protected]
.
This is a work of fiction. All of the characters and events portrayed in this book are products of the author’s imagination or are used fictitiously.

Ariana Leotokos lifted the gauzy curtain away from her bedroom window to watch her father’s yacht pull up to the dock. The vessel held another willing victim for her father’s childish and vindictive game, another desperate soul. There had been six so far, some cautious, some arrogant, all of them trying to solve the puzzle of the Minotaur. All of them had failed, and all of them had been publicly humiliated and financially ruined by both their folly and her father’s power.

Would the seventh be any different?

The yacht had moored, and Ariana leaned closer to see who would disembark. First Aries, one of her father’s many henchmen. And then...

He
looked
different. He didn’t, she acknowledged, look like a computer geek. Her father had enticed some of the brightest, youngest minds in the IT world to attempt to disarm the Minotaur virus. Most of them had looked anemic and underfed, sporting goofy, graphic tee-shirts and glasses. This man didn’t look like that at all.

She couldn’t see him all that well from this distance, but she still got a sense of innate power and authority. He was tall, for he had to duck underneath the yacht’s awning as he came onto the dock. His hair was dark and cut close, and when he lifted one hand to shield his eyes from the sun Ariana saw the muscles ripple underneath the cotton fabric of his pressed polo shirt and khakis.

Her breath caught, and she cursed herself for a fool. He was just a man. And yet, if he
were
different, he might be her one chance at freedom.

She felt her breath catch again when the man dropped his hand from his eyes and looked upwards... straight at her. From this distance she couldn’t see the color of his eyes but she felt the intensity of his gaze. Or was she just being fanciful? How could he even see her from such a distance? Belatedly she realized she almost had her nose pressed to the glass and she stepped quickly away from the window, letting the curtain fall back into place. Yet her heart still thudded, and her palms were slick. He could, she thought with a thrill of fear, be the one.

Theo Atrikes surveyed Miles Leotokos’s villa with cold dispassion. Clearly the man was trying to impress-or really, intimidate--him, but he refused to be wowed by any of it. Not the multimillion dollar yacht, nor the private island in the Aegean Sea, nor the sprawling villa in front of him. So the man had money. He'd always known that, and anyone with a little brawn or brains could make money.

Still, he felt something--a pulse of awareness--as he stepped off the dock onto the gravel path that led up to the villa. Someone was watching him.

He glanced upwards, and saw a dark outline at one of the upstairs window. The sunlight gilded her figure in gold--for it was surely a woman. A tall, slender woman who still possessed ample curves.

Interest flared. Was it Leotokos’s wife? He didn’t know much about the man’s family. The billionaire tycoon was intensely private, and wisely so, since Theo had his own doubts about how legitimate his business was.

His mouth curved in a grim smile. No, not doubts. Certainties. And he intended to act on those certainties tonight.

Dropping his gaze from the upstairs window, he set his mouth in a grim line and followed Leotokos’s underling into the villa.

Theo hadn’t actually expected Miles Leotokos to meet him, although he could not deny an intense curiosity about the man who had, without knowing it, dominated most of his life. The man who had picked him up at Piraeus in the yacht left him at the door to the villa, and a stony-faced butler type took over, leading him into a spacious reception room with a lot of pricey antiques and old art.

"Just water, please." He paced the room while he waited, examining the obvious signs of Leotokos’s wealth. One of the paintings on the wall looked like an original Van Gogh. He heard the door open, and turned to accept the glass of water from the cadaverous Jeeves he’d seen before.

Except it wasn’t the butler. It was the woman at the window.

He knew this instinctively, felt it in his gut. And others parts, because the woman was beautiful, tall and straight with the bearing of a warrior and the lush curves of an Aphrodite.

She didn’t answer, just eyed him up and down. Not as if she were checking him out, more like... she were assessing him. Amused, he wondered if he came up to scratch.

He heard the sound of the knob turning and with silent swiftness the woman stepped back against the wall, so the door hid her from view as it swung open once again.

Intrigued, Theo shifted his gaze away from her towards the butler.

"Thank you." He took the glass, keeping his gaze fixed firmly on the butler. He wasn’t about to betray this woman’s presence, whoever she was. He was far too curious about her.

The butler hesitated in the doorway, lines of disapproval or perhaps just weariness etched on his lantern-jawed face. "Perhaps you would like to retire to your room, sir? Mr. Leotokos will see you at dinner."

The butler’s mouth tightened. "As you wish." He left the room, and as the door swung shut behind him the woman stepped forward.

She was, Theo thought, rather magnificent. She stood tall and proud, like a dark flame. Her eyes were slate grey, her mouth a perfect pink curve.

"Can I help you?" he asked, and she shook her head impatiently.

"I don’t have time for chitchat."

"Is that what that was?"

"Or jokes," she snapped, and he arched an eyebrow.

"You’re here to attempt to disarm the Minotaur virus?" He nodded, and she bit her lip, studying him carefully. "You know six men like yourself have tried already?"

"No? They came here to try to disarm the virus."

"I wouldn’t be here,’ Theo said mildly, "if I didn’t think I could succeed at what I intend to do."

"Why did you agree to come? You need the money?"

The reward for solving the virus, Theo knew, was several million dollars--and employment with Leotokos. "No," he said coolly. "Money doesn’t interest me." And neither did working for his enemy. He'd come for one purpose only, and he didn't intend to reveal it to this woman, intriguing as she was.

She looked almost comically disappointed at his admission. "You’re poor."

He let out a surprised chuckle. "No, actually, I’m not."

"You have money, then?" She looked hopeful now, her eyes lightening to a silvery softness, and Theo decided he’d had enough of this odd interrogation.

"My name is Ariana."

He inclined his head in acknowledgement. "Theo Atrikes." He waited, but she didn’t explain herself and as gorgeous as she was he didn’t feel like playing guessing games. "Did you want something from me?"

Her silvery eyes swept him from head to foot in cold, stark assessment. Even so, Theo felt himself react under that gaze, parts of him tense, tauten. With her flowing dark hair and silvery eyes, she was incredibly, icily beautiful.

"I don’t want anything from you," she said slowly, "yet."

A cold finger of suspicion crept along his spine. Was she some sort of spy for Leotokos? A Mata Hari of the IT world? He definitely didn’t trust her.

"Well," he said and drained his glass of water, "it’s been nice meeting you."

They both heard footsteps and like a shadow Ariana slipped across the room, to a door concealed behind a large portrait. Theo watched her go in bemusement, for he still had no idea who she was or what she wanted.

"Sir?" The butler cleared his throat, and Theo handed him his glass.

Ariana gazed at her reflection in the mirror, resolutely satisfied. She wore a silvery sheath dress and her hair was caught up in a chignon. Elegant, refined, restrained. All as her father wanted.

Sighing she turned away from the mirror and gazed out the window at the placid Aegean Sea. The sun had begun to set and the tranquil surface shimmered with myriad lights. It was beautiful, and it was the only view she’d had for the last five years. She had not been off this island since she was eighteen and returned from convent school.

Her life, she thought, not for the first time, had simply been a matter of exchanging one prison for another. But tonight she wanted to be done with prisons.

She didn’t know if Theo Atrikes was the one who could help her achieve her freedom, but she intended to find out. In her few minutes’ hurried conversation with him he’d shown more finesse and authority than any of the other six she’d spoken with. One of them, she remembered, had actually stammered and backed away from her as if she were some Gorgon or harpy.

But would Theo Atrikes be willing to break her out of this gilded cage? Would he accept her trade of information for freedom?

There was only one way to find out.

As she headed downstairs Ariana heard the muted clink of glasses and low rumble of conversation. Her father, with what she considered a rather sadistic impulse, liked to entertain his victims before they attempted to disarm the virus. He showed off his daughter and wife, provided a lavish meal, the best wines from his cellar.

Then the hapless hopeful was given one of the villa's best bedrooms, and when dawn rose and a last meal had been served, her father ushered him--they'd all been men so far--into the study where the virus-infected computer was kept. The man had just one hour to attempt to disarm the virus, and meanwhile her father set plans in motion to destroy the technowizard who’d thought he could best him. It was a devious and ruthless way to rid himself of any potential competitors, presented as no more than an entertaining challenge.