The Greek Rule (The Greek Series) 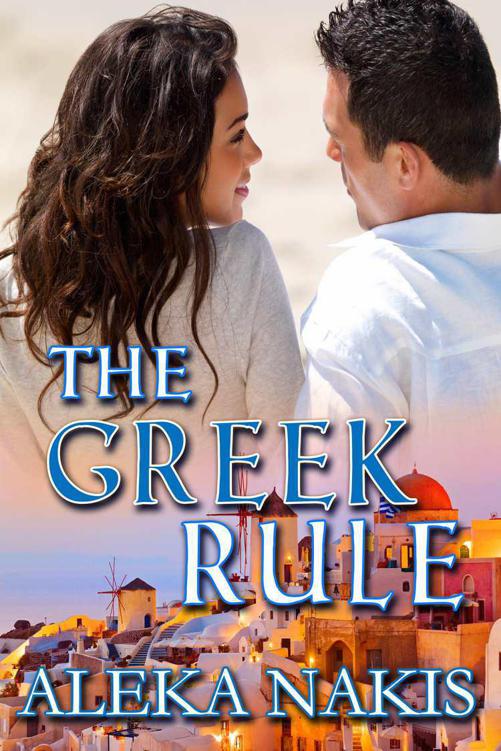 Warning: All rights reserved. The unauthorized reprodu
c
tion or distribution of this copyrighted work is ill
e
gal. Criminal copyright infringement, including i
n
fringement without monetary gain, is investigated by the FBI and is punis
h
able by up to 5 years in federal prison and a fine of $250,000.

This is a work of fiction. Names, characters, places, and occurrences are a product of the author’s imag
i
nation. Any resemblance to actual persons, living or dead, places, or o
c
currences, is purely coincidental.

To my friend, Kate.

Thanks for pushing me into believing it was possible.

The endless morning re-reads were the highlight of my days.

Here is your book!

Mou
:
is the possessive Greek term of my

Antra mou
: my man/ my husband

Gineka mou
: my woman/ my wife

Koumbaroi
: sponsors at a wedding or christening

Komboloi
: beads strung together on a chain and traditionally used by men

And a term you can use for almost anything in Greek:

Gia!
: Hello, goodbye, to your health, bless you, cheers!

Foods mentioned
: (
If you’d like the recipes, please e-mail me!)

Galaktoboureko
: a sweet creamy custard-style filling layered with a crisp phyllo dough and drizzled with a warm honey-syrup.

Two months to learn from the best hotelier in the world, then, if everything went as planned, Athena Lakis wouldn’t be working for someone else. She did enjoy her job. She loved it. But Athena had always dreamed of running her own empire.

Sitting opposite the man who’d agreed to make it all possible her boss, Lucas Giardetti, she relayed the last minute details of the Naples Children Charity Ball. It was Athena’s last big project under her current position. She’d worked hard to make the event a huge success for Giardetti Worldwide Hospitality. Honestly, it was the least she could do in appreciation for the opportunity they had given her. The charity ball was the cherry on the whipped cream, and she wanted everything to go just right.

The florist had delivered the proper shade of pink freesias, even if it had taken him three tries. The 1969 Vintage Dom chilled at the perfect temperature, even if upon delivery it had been two degrees too warm. They weren’t spending that kind of money to drink warm champagne. And the maitre d’hotel had reassigned the waiter who didn’t own an iron to a different function. She didn’t want the young man to lose his job. She simply didn’t want him serving guests while wearing wrinkled attire.

No, this night was too important for anything to be off by a single degree. The sponsors of the Naples Children Charity appreciated the worthiness of the cause, but they also expected pampering for their great generosity.

Suddenly distracted, she froze when the most striking man she’d ever see entered her peripheral vision. Her abdomen tightened, her heart raced, and she had to work very hard to her keep breathing steady as he walked across the hotel lounge, maneuvering around the antique tables in her direction. She didn’t need the disturbance of this Adonis male three hours before the fundraising ball began.

Making a conscious effort not to look beyond the dossier she reviewed with Luca, she attempted to continue with her final report. “The guests will arrive from the south entrance between eight and nine. Cocktails will begin with—”

“Hello,
my friend.” Luca rose to greet the man commanding Athena’s attention. Standing a handsome six-foot-two, Luca was not a small man, but the obvious confidence and physical appearance of the tall, broad stranger with the dark eyes and bright smile dwarfed her employer. “I am so glad you could make it to Naples for the ball. What is it? At least three months since we sat together for anything other than business. We have some catching up to do.”

“My thoughts exactly,” drawled the sexy stranger in an accent that was more than a little familiar to her. He did not wait for an introduction. Rather he took Athena’s hand and gently raised it to his lips. His warm breath caressed her skin, sending a parade of tingles through her body. “I can see why you choose to work such long hours.”

There was playful recognition in his eyes. He must know her, or know of her. She was curiously aware of the familiarity in his tone, but she couldn’t place him. Who was this man who sucked every bit of air from the lounge?

She mentally searched the evening’s guest list, but the shape of his eyes and the set of his jaw did it. Suddenly, she knew who he was.

Not only was he bidding against her dream, he was soon to be related to her best friend.

Dumbfounded, she stared at her best friend’s future brother-in-law and the head of Strintzaris Enterprises. She’d had no idea her boss kept the competition as a close friend.

Shifting in her seat, she waited for him to say something about the property they were both fighting for in Crete. DDGC sat atop the Strintzaris mega-empire, while she hid within the coattails of Luca Giardetti’s name.

Luca smiled and made the introduction. “Alexandros Strintzaris, this is Athena Lakis. Miss Lakis chairs the consulting committee responsible for the symposium.”

“Likewise.” Trying unsuccessfully to retrieve her burning hand, she broadened her smile.

“Athena is a great force within Giardetti. She doesn’t climb the rungs on the corporate ladder, she jumps over them.”

“Ah, but what a pleasure it would be to lure her to Strintzaris Enterprises. Then, she would be our force.”

Alexandros raised his eyebrows to the other man in a fun challenge and laughed. Then he turned his dark eyes in Athena’s direction, and his gaze stroked every inch of her body before he spoke.

“I will have to find an offer you can’t refuse. We already have ties that bind us, and now I look forward to exploring new options that will keep us connected.”

The cryptic message swirled in her mind as she explored the possibilities of
new options
. Would these options be professional, personal, or very personal?

No, she couldn’t let her mind wander into a territory where he had the upper hand. Alexandros was smooth, like a panther in disguise. And Athena hated herself for being attracted to an arrogant Greek. Even worse, to the man who’d just up the ante on her dream property and was raising the resort almost out of her reach. She needed to remain detached and professional.

“It will be a cold day beneath us before I let such an asset come your way.” Luca offered comedic relief, and she attempted a nonchalant smile.

“Duly noted,” Alexandros said, allowing Athena to retrieve her hand while looking from her to Luca. “I have one more
industry
question before we settle down to enjoy the evening.”

“Anything, my friend,” Luca said.

“Why the sudden interest in Greece? Not that Strintzaris minds the competition, but Giardetti’s play for the property in Crete surprised me.”

Holding her breath, Athena wondered how Alexandros would react to the truth. Her gaze skirted toward her boss, who didn’t reveal anything more than required. Luca simply shrugged.

“We both know it has a certain appeal, good potential, and the timing is right. Now come, let’s catch up.” The Italian indicated a seat, inviting his friend to join them for a drink. “I’d love to put business aside for an hour or so.”

Sitting back in the leather antique wing chair, Alexandros placed one long leg across his opposite knee, drawing a slight glance from Athena. This was a man very comfortable in his own skin. Warm, sun-drenched skin covered with the world’s best clothing.

“My staff assures me the symposium is a great success. They are looking forward to tonight’s closing festivities. And of course, I could not have missed the fundraiser you hold so dear, Luca.”

Shifting in her seat, Athena interjected in a pleasant and professional voice. “We are happy to hear that, Mr. Strintzaris. Your staff is delightful, but your generosity will be the most effective tonight. The Naples Children’s Charity is a worthy cause, and the funds raised this evening will be allocated toward a home for children waiting to be adopted by loving families.”