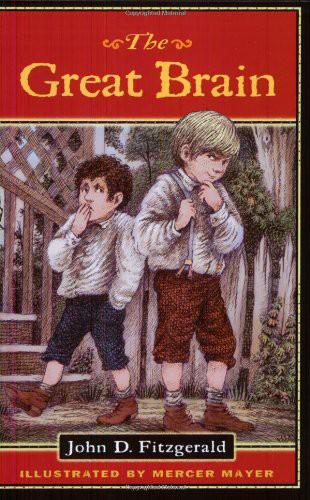 Published in the United States of America by Dial Books for Young Readers, 1969

Except in the United States of America, this book is sold subject to the condition that

including this condition being imposed on the subsequent purchaser.

For Michele Ann and John Michael

Revenge Can Be Sour

The Great Brain Saves the Day

A Wreath for Abie

MOST EVERYONE IN UTAH remembers 1896 as the year the territory became a state. But in Adenville it was celebrated by all the kids in town and by Papa and Mamma as the time of The Great Brain’s reformation.

I was seven years old going on eight. Tom was ten, and my other brother, Sweyn, would soon be twelve. We were all born and raised in Adenville, which was a typical Utah town with big wide streets lined with trees that had been planted by the early Mormon pioneers.

Adenville had a population of twenty-five hundred people, of which about two thousand were Mormons and the rest Catholics and Protestants. Mormons and non-Mormons had learned to live together with some degree of tolerance and understanding by that time. But tolerance hadn’t come easy for my oldest brother, Sweyn, my brother Tom, and myself. Most of our playmates were Mormon kids, but we taught them tolerance. It was just a question of us all learning how to fight good enough for Sweyn to whip every Mormon kid his age, Tom to whip every Mormon kid his age, and for me to whip every Mormon kid my age in town. After all, there is nothing as tolerant and understanding as a kid you can whip.

We never had any really cold weather or snow in Adenville because it was situated in the southwestern part of Utah, known to the Mormons as Dixie due to its mild climate. This was fortunate since we didn’t leave indoor toilets then. Everybody in town—from Calvin Whitlock, the banker, down—had to use a backhouse until the water closet Papa ordered arrived from Sears Roebuck. We called them backhouses and not outhouses because in Utah an outhouse was a sort of toolshed and storage room. Backhouses ran from two-holers to six-holers. Ours was a standard four-holer. You could just about judge a family’s station in life by their backhouse. Just by looking at the Whitlock backhouse, with its ornate scroll woodwork trim and its fancy vent, you knew Calvin Whitlock was a person of means and influence in the community.

If there was one man in all of Adenville who would order the first water closet ever seen in town, that man had to be Papa. I thought Papa was the greatest man in the world except for one weakness. Papa just couldn’t resist ordering any new invention that he saw advertised in magazines or catalogs. Our big attic was filled with crazy inventions that didn’t work. Papa was always threatening to write to the presidents of these companies and denounce them as swindlers, but he never did. I guess he was afraid they would write back and call him a fool for believing what they said in their advertisements. Papa was editor and publisher of the
Adenville Weekly Advocate
. You would think a man smart enough to be an editor and publisher would be smart enough not to let himself be swindled. But Papa kept right on ordering new inventions. It was no surprise to anybody in town when they learned Papa had ordered the first water closet most people had ever seen.

The first Tom and I knew of it was the morning Fred Harvey walked into our backyard with a pick and shovel on his shoulder. He was the only plumber in town. He was a middle-aged man with a face that looked as if he’d just taken a bite out of a sour pickle. He was knows as a very cranky person who didn’t like kids. Mamma said the reason Mr. Harvey didn’t like kids was because he had never had to put up with any of his own. It didn’t sound quite right to me, but that is what Mamma said.

When Mr. Harvey came into our backyard, Tom and I were on our big back porch which ran the width of our house. We were beating with sticks on Mamma’s washtubs, pretending that we were drummers in a band. Tom had a grin on his freckled face as he banged away. He was the only one in our family who had freckles. Tom didn’t look like Papa and he didn’t look like Mamma, unless you put them together. Then you could see that his hair was a cross between Papa’s dark hair and Mamma’s blond hair and that he had Papa’s nose and mouth and Mamma’s stubborn chin. Where the freckles came from was a mystery. I took after Papa and had curly black hair and dark eyes. My other brother, Sweyn, took after the Danish grandfather for whom he was named. He had blond hair and a stubborn Danish chin.

Tom and I heard the clanking sound of the pick and shovel being dropped to the ground by Mr. Harvey over the sound of our beating on the washtubs. We stopped and turned around to watch.

Mr. Harvey pulled a bandanna handkerchief from his overalls’ pocket and blew his nose loudly. Then he looked at us as if he resented us being on our own back porch.

“Why aren’t you kids in school?” he demanded.

“Because there isn’t any school today,” Tom said, glaring right back at Mr. Harvey. “And there might not be any school for a whole week.”

Mr. Harvey certainly knew that Miss Thatcher taught the first through the sixth grades in our one-room schoolhouse. He also knew that when she was sick there wasn’t any school for any kid in town. I guess this kind of upset him.

Tom and I watched Mr. Harvey start to dig a hole in our backyard.

“What is he doing?” I asked, just as curious as I could be.

We left the porch and approached Mr. Harvey.

“Why are you digging a hole?” Tom asked, polite as all get out.

“To bury nosy little boys in,” Mr. Harvey said gruffly. “Now get away from me and leave me to my work.”

My brothers and I always called each other by our initials because that was the way Papa addressed us. We all had the same middle initial because we all had the same middle name of Dennis, just like Papa. More than two hundred years before I was born, an ancestor of ours named Dennis betrayed six of his cousins to the English during the rebellion in County Meath, Ireland. His lather decreed that all male Fitzgeralds must bear the middle name of Dennis to remind them of the cowardice of his son.

I followed Tom into our big kitchen with its ten-foot-wide coal-burning range. Mamma was kneading dough on the big kitchen table as we entered. I had never seen Mamma’s hands idle. They were busy hands-sewing, mending, cooking, washing, knitting, and always moving.

Mamma’s blond hair was piled high in braids on her head. The sunshine coming through the kitchen window and striking Mamma’s head made her hair look like golden sunlight.

She looked at us and smiled. “What have you two boys on your minds?” she asked.

“Why is Mr. Harvey digging a hole in our backyard?” Tom asked.

“It is the cesspool for the water closet your father ordered from Sears Roebuck,” Mamma answered.

Aunt Bertha, who had lived with us since the death of her husband, was greasing a bread pan with bacon rinds. She wasn’t really our aunt, but we called her Aunt Bertha because she was just like one of the family.

“This water closet business is the most foolish thing your husband ever did,” she said to Mamma. When Aunt Bertha criticized Papa, he was always Mamma’s “husband.” When Papa did something Aunt Bertha approved of, he became “that man of ours.” She was a big woman, with hands and feet like a man’s and gray hair she always wore in a bun at the nape of her neck.

Tom scratched his freckled nose as wrinkles appeared on his high forehead. “You put china in a china closet,” he said slowly. “You put clothes in a clothes closet. You put linen in a linen closet. But how can you put water in a water closet?”

I was dumbfounded. It was the first time in my life I’d ever heard my brother, with his great brain, admit he didn’t know everything. Every year when Papa renewed his subscription to the
New York World
, they sent him
The World Almanac
. While Sweyn and I read books like
Black Beauty
and
Huckleberry Finn
, Tom read
The World Almanac
and the set of encyclopedias in our bookcase. Tom said his great brain had to know everything.

“A water closet is a toilet you have inside your house,” Mamma explained. ‘”That is why your father had Mr. Jamison partition of that room in the bathroom. The hole Mr. Harvey is digging is the cesspool for the new water closet.”

“But Mamma,” I protested, thinking about the odor coming from our backhouse, especially on hot days, “it will stink up the whole house.”

Aunt Bertha agreed with me. “I tell you, Tena,” she said to Mamma, “this is going to make us the laughing stock of Adenville.”

“Now, Bertha,” Mamma said with soft rebuke, “I’ve seen water closets in hotels in Salt Lake City and in Denver while on my honeymoon. I assure you they are very convenient and sanitary.”

I remembered how I couldn’t believe you could get water without a pump until they built the Adenville reservoir and Papa had explained how the reservoir being on higher ground forced the water through the pipes. And when Mr. Harvey had installed our hot-water heater and we got hot water right out of a tap, I thought it a miracle. But a backhouse in our bathroom was beyond my wildest imagination. I was positive that Papa had been swindled again on another crazy invention.

Tom and I went back outside to the porch. We watched Mr. Harvey continued to dig the cesspool. In a little while Sammy Leeds, Danny Forester, and Andy Anderson came into our backyard. Mr. Harvey chased them away and told them to stay out of the backyard while he was working. Tom and I sat on the porch, watching until lunchtime.

Papa came home for lunch with Sweyn, who had been helping at the newspaper office. Mr. Harvey came to our back door. He demanded that Papa keep all kids out of the backyard while he was working. Papa told Sweyn to remain home to see that this was done.

“Can we watch from the back porch?” Tom asked.

I could tell from the conniving look on Tom’s face during lunch that his great brain was working like sixty to turn this to his financial advantage. He disappeared right after lunch. I went out to the back porch with Sweyn.

Mr. Harvey had just finished eating his own lunch which be had brought in a shoebox. He went to the hydrant and got a drink of water and then went to work. Mamma had asked him to have lunch with us, but Mr. Harvey had refused.

Sweyn and I sat on the railing of the back porch watching.

“Think you’ll have any fights keeping the kids out of the backyard?” I asked hopefully.