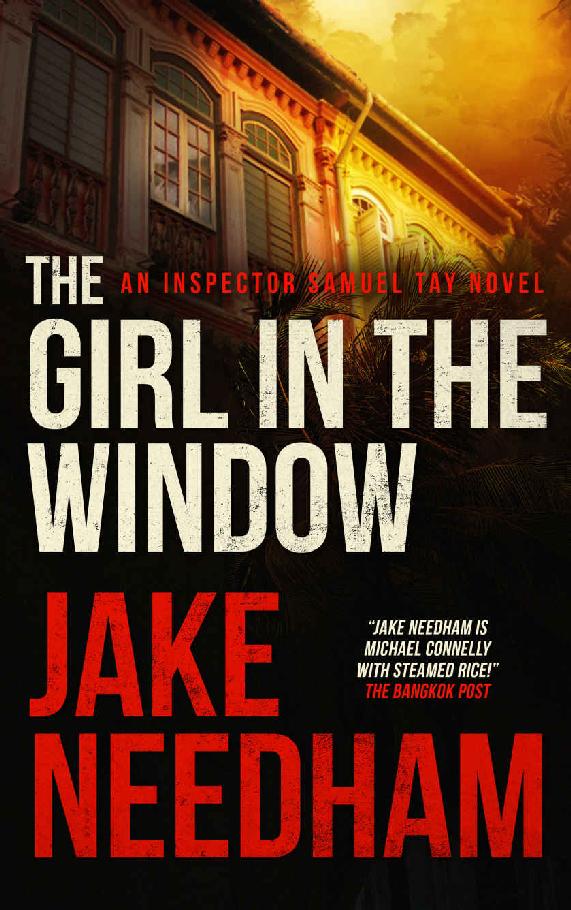 SINGAPORE IS a good house in a bad neighborhood.

Three hundred million Muslims live in Indonesia and Malaysia completely surrounding the barely five million people living in the secular city-state. Islamic terrorism in Asia may not get much attention in America or Europe, but it gets plenty in Singapore.

They’ve been hit once already. Not long ago, coordinated truck bombs laid waste to three American hotels in Singapore. Thousands were killed and injured. And everyone knows it’s just a matter of time before Singapore gets hit again.

Abu Suparman is the messianic leader of a radical group of Indonesian Muslims fighting for ISIS in Southeast Asia. Most people think Suparman was personally responsible for the Singapore hotel bombings. When Singapore receives a tip that Suparman is slipping into the country to meet a sister having cancer surgery, Inspector Samuel Tay gets the job of finding him before something nasty happens.

It seems at first to be a straightforward assignment. Tay is given two officers to work with him: his own sergeant, Robbie Kang, and Sergeant Linda Lee, a capable officer with whom Tay once had a disastrous and blessedly brief personal relationship. All they have to do is keep the sister under surveillance until she leads them to Suparman, right?

The surveillance turns into a shambles, people die, and Suparman vanishes. Tay’s only clue to what really happened that rainy night on Serangoon Road is a girl he briefly glimpsed watching it all from a window in the building next door.

Tay’s quest for the girl in the window takes him on a terrifying journey into a no man’s land where there are secrets so big governments will kill to protect them. With the help of John August, a shadowy American who has murky connections with international intelligence agencies, Tay battles governments determined to bury the truth and unmasks politicians who are using their power and position to hide their own crimes.

Tay is going to get a little justice for Singapore.

If he can just stay alive long enough to do it.

WHAT THE PRESS SAYS
ABOUT JAKE NEEDHAM

“Jake Needham is Asia’s most stylish and atmospheric writer of crime fiction.”
– The Singapore Straits Times

“In his power to bring the street-level flavor of contemporary Asian cities to life, Jake Needham is Michael Connelly with steamed rice.”
– The Bangkok Post

“Jake Needham’s books have been successful in seriously irritating the powers that be in Singapore to the point where his newest books are no longer available there. In general, if a government openly or surreptitiously bans a book or a writer it means that they are worth reading. It really is a very strong
BUY THIS
signal.”
– Libris Reviews

“Jake Needham is a man who knows Asia like the back of his hand.”
– The Malaysia Star

“Jake Needham has a knack for bringing intricate plots to life. His stories blur the line between fact and fiction and have a ‘ripped from the headlines’ feel. Buckle up and enjoy the ride.”
– CNNgo

“Mr. Needham seems to know rather more than one ought about these things.”
– The Wall Street Journal

“What you will not get is pseudo-intellectual new-wave Asian literature, sappy relationship writing, or Bangkok bargirl sensationalism. This is top class fiction that happens to be set in an Asian context.”
– Singapore Airline SilverKris Magazine

“For Mr. Needham, fiction is not just a good story, but an insight into a country’s soul.”
– The New Paper (Singapore)

THE GIRL IN THE WINDOW

No matter how paranoid or conspiracy-minded you are,

what the government is actually doing

is worse than you can possibly imagine.

This ain’t the Garden of Eden

There ain’t no angels above

And things ain’t what they used to be

And this ain’t the summer of love

THE APARTMENT WASN’T very big and it wasn’t very appealing. Just once she would like to walk into a suite at a Four Seasons rather than one of these shabby, ramshackle places with decades of unhappiness and despair soaked right into the walls.

The front door opened into a living room that was slightly longer than it was wide. She turned on the air-conditioner and listened to it wheeze and rattle until it finally caught and began slowly filling the room with tepid air. Then she took stock of her surroundings.

The living room was furnished with a brown tweed sofa, a rectangular coffee table, and a faded, threadbare rug that might once have been green. The couch sagged in the middle and the table was made of some nasty-looking synthetic material trying without the slightest success to imitate mahogany. A small dining table with a glass top and a couple of straight-backed wooden chairs occupied one corner and a tiny Pullman kitchen occupied the other. Across the room a tattered shade bleached white by the sun covered a double-hung window.

She closed the door behind her and threw the dead bolt. Dropping the two small bags she was carrying on the sofa, she went straight to the window, and lifted one side of the shade. It wasn’t a view anyone was likely to put on a postcard, but the view was the reason she was there.

The apartment was on the third floor at the southeast corner of the building and it looked straight down into Serangoon Road. She had an unobstructed view along the road for at least a quarter of a mile. That might be useful later, but what mattered now was off to her left.

The Fortuna Hotel was just on the other side of a small cross street called Owen Road. It was a modest tourist hotel with fewer than sixty rooms on its five floors and from the window she had a clear view of the entrance to the lobby. She smiled. This might be the easiest job she had ever done.

She dropped the shade and went to check out the rest of the apartment. It didn’t take her very long.

The small bedroom was dingy, and a lumpy-looking double bed stripped of linens almost filled it. She didn’t bother to go in. She could see the crusty-looking stains on the mattress from the doorway.

She put her head in the bathroom and was relieved to see it appeared to be reasonably clean, at least it did if she didn’t look too closely and she certainly wasn’t going to do that. The bedroom didn’t matter. She had brought a sleeping bag and had no intention of going near the bedroom. The bathroom was another thing altogether.

She might be here for two or three days. A clean bathroom was a big deal.

She went back to the living room and began unpacking her two small leather valises. The first held her sleeping bag, a half dozen bottles of water, a box of peanut butter PowerBars, and a few apples and bananas. On the bottom were three pairs of clean underwear and two shirts. She left the clothes in the valise and tossed the sleeping bag on the sofa, but she carried the food and water over to the round table in the corner and spread it around so she could tell at a glance what she had left.

The second valise contained her equipment: a pair of Steiner tactical binoculars with a built-in rangefinder; a Sig-Sauer nine millimeter with two extra magazines; two burner phones; a plastic jug of bleach and a wad of rags; and of course her Remington Defense CSR bolt-action sniper rifle which was frequently called the rucksack rifle because of the ease with which it could be broken down and concealed. She loved the rucksack rifle. It was rugged and accurate and it fired the 7.62mm NATO sniper round. She thought of it as nine pounds of pure ballistic badassery.

It took her less than forty-five seconds to put together the rifle’s five components, check the action, and slide the Leupold & Stevens scope onto its mount. She snapped the AAC quick release suppressor to the muzzle and laid the rifle on the couch.

The only part of setting up that turned out to be difficult was getting the window open. It would really have been something to have to call off the whole operation because she couldn’t open the damned window. Christ, they would never have let her live that one down. But she pushed and struggled and slammed the frame with the heel of her hand and eventually it opened.

She moved the window up and down a couple of times to make certain it would open again when she needed it to, but then she quickly closed it again. Singapore’s air was thick, heavy, and wet. Breathing it was like trying to inhale warm Jell-O. Every single time she was in Singapore she wondered exactly the same thing: why did human beings choose to live in a place with such a crappy climate?

She pushed the sofa table against the wall near the window and stood back to examine its position with a critical eye. She nudged it a foot to the left, then a few inches back to the right. After she had it positioned exactly the way she wanted it, she laid out phones, the binoculars, and the Sig so that all three were within easy reach. After that, she dragged two of the straight chairs over in front of the window, raised the shade, and pushed the two chairs around until she had them lined up correctly. Then she sat down in one and put her feet in the other.

Whoever picked the apartment had done a good job. From where she sat, she could see both the main entrance to the Fortuna Hotel and an emergency exit next to a Western Union office on Serangoon Road. She hardly even had to move her head.

When she was satisfied with everything, she picked up the Steiner binoculars, leaned back from the window to prevent the lenses from flaring with a burst of sunlight, and took a closer look at the entry to the hotel lobby. There was just a single pair of glass doors level with the sidewalk. No steps, no ramps. A piece of white paper was taped to the door on the left. Somebody had handwritten on it
Use other door
.

She hadn’t seen anyone at all go in or out of the lobby in the fifteen minutes or so she had been in the apartment. Maybe the hotel didn’t even have enough traffic to make it worthwhile to unlock both doors. All the better for her.

She touched the binocular’s rangefinder button and the red LCD lit up. The lobby doors were ninety-seven meters away.

She could make that shot with the nine. Well, probably she could make it with the nine, but downhill shots were tricky with a handgun. Although the distance wasn’t too bad, the firing angle from the third-story window would alter
the bullet drop and that would make her change her normal hold for the distance. The shot wouldn’t exactly be automatic, not even for her. Which really didn’t matter, she supposed, since she wasn’t going to try it that way.

That was why she had the Remington and why the Remington had a box magazine loaded with ten rounds of long-range MK 316 frangible cartridges, a 175-grain round designed for long-range sniping.

She wouldn’t need ten rounds. She wouldn’t even need two. One round was all that would be necessary.

Swish by Joel Derfner
Bought by Her Italian Boss by Dani Collins
As the Crow Flies by Jeffrey Archer
Cereal Box Mystery by Charles Tang, Charles Tang
The Pesthouse by Jim Crace
Radiant by Daley, Christina
The Glimpse by Claire Merle
Violent Crimes by Phillip Margolin
Taken Identity by Raven McAllan
To Die a Dry Death: The True Story of the Batavia Shipwreck by Greta van Der Rol