Read The Girl Behind the Mask Online

The Girl Behind the Mask 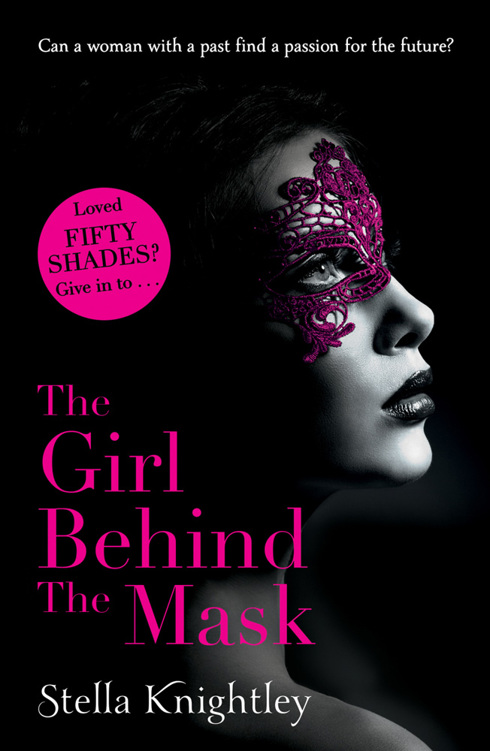 The Girl Behind The Curtain (August 2013)

Stella Knightley is the author of twenty-six novels published under other names.
The Girl Behind The Mask
is the first of three books in the
Hidden Women
series, which blends the daring stories of historical women of note with an erotically-charged contemporary love affair which will delight the fans of
Fifty Shades
. Stella grew up in the west of England and now lives in London.

The Girl Behind The Mask

First published in Great Britain in 2013 by Hodder & Stoughton

Work has been asserted by her in accordance with the Copyright,

All rights reserved. No part of this publication may be reproduced,

stored in a retrieval system, or transmitted, in any form or by any

means without the prior written permission of the publisher, nor be

in which it is published and without a similar condition being

imposed on the subsequent purchaser.

to real persons, living or dead is purely coincidental.

To Mark, for his encouragement, his patience and his love.

It should not have been so easy, escaping the watchful eye of the chaperone, but fortunately the woman Gaetano Giordano chose to care for his only daughter Luciana was as eager to have some fun in the city as her angel-faced seventeen-year-old charge. The chaperone shared a glass of wine with the priest in the salon on the
piano nobile
, while Luciana, in her cell-like bedroom on the floor below, prepared for her daring escape.

Moored beneath her bedroom window was the small boat the priest had arrived in, rowing himself to avoid awkward questions as to who needed to confess when all decent people should be tucked up in bed. Dressed in the boy’s clothes she had stolen from her brother, Luciana found it no trouble at all to let herself over the sill with a twisted bedspread for a rope. She landed with a gentle ‘pouf’ on a pile of blankets the priest had collected for the poor. Gathering herself quickly, Luciana unwound the rope by which the boat was tethered. She found the oars, carelessly hidden beneath the blankets, and slotted them into their locks. Pulling her simple white half-mask down over her nose and with a three-cornered hat to cover her hair, Luciana pushed out into the canal.

Luciana rowed like the boys she had played alongside during long summers on the lagoon, when her father was away on business and the maids were too busy flirting to watch her. No one would have suspected that beneath the tricorn were the soft, dark curls that could have inspired love poems. And under the cloak and the billowing white shirt . . . Well . . .

Luciana abandoned the priest’s boat at the entrance to the Grand Canal. Quick as a pickpocket, she weaved her way through the revellers on the Rialto Bridge. It was Carnevale. Again. Just that morning in the chapel, the priest had complained that these days Venice was all ‘Martedì Grasso and no Lent’. Silly old hypocrite. Everyone wore masks, from the very highest to the lowest of the low, all making the most of their anonymity as they crowded the waterside. Pillars of society pinched bottoms. Well-born ladies, ordinarily so refined you might think they never passed wind, were lifting their skirts in the hope of feeling more than a breeze between their thighs.

Luciana smiled. She recognised so many of them: associates of her father, friends of her late mother, pious fellow members of her church’s congregation. All of them kidding themselves that a papier-mâché snout could hide their identities, while giving themselves away with familiar hand gestures and rip-snorting laughs. Luciana was cleverer than that. She had to be. If she got caught now, it was straight to a convent. So she kept her small hands stuffed deep inside her pockets and walked with her feet turned out, just as her brother did. She set her rosebud lips into an unsmiling line that even her childhood nurse would not have recognised. When acknowledged by someone keen to know more, Luciana merely nodded and kept on her path. She did her best not to meet anyone’s gaze. She would not stop. She would not speak. She had an appointment to keep.

Passing through the deserted Rialto Market – as extravagantly vaulted as any cathedral – Luciana pulled her cloak a little tighter to her neck. A gaggle of prostitutes, taking advantage of the revelries to stray from the
Carampane
, took her for the boy she pretended to be and offered to teach her something useful in return for a couple of coins. The most daring flashed her ample breasts as added enticement. Luciana held her cloak right up to her mouth to cover her grin.

‘Oh, he’s not interested in us, girls,’ the prostitute called after Luciana’s back. ‘He must be looking for an education of the Greek kind.’

If only you knew, dear ladies.

Luciana pressed on. The prostitutes could have no idea how close they had come to discovering Luciana’s real mission. They doubtless would not have understood it. Looking up to consult the painted name, Luciana turned a corner into a
calle
she would not, without her disguise, have walked down in the daylight. Not alone at any rate. She crossed the
Ponte delle Tette
, the ‘Bridge of Tits’, and braved more lurid catcalls from the girls who were plying their trade there. Luciana pushed on into a quieter part of town. Quiet enough to be dangerous. But her disguise gave her a sense of invulnerability and her purpose gave her the courage to tackle any number of robbers who might lurk in the dark.

Just as promised, she found the house with the monkey’s-head door-knocker, right where the street took another turn. This was the place. This was the house that held the key to all Luciana wanted to know. Acting quickly, before her bravado deserted her, she grasped the monkey’s head and hammered to announce her arrival. The sound echoed down the alleyway before being swallowed up and spat out in a different accent by the water that threaded through the city like blood through veins. Luciana thought she saw a shadow at a window opposite. She pulled her hat down further. No one must know she was there.

It was a while before anyone responded. Had the servants taken so long to answer a call at Luciana’s father’s palazzo, they would have been turned out. But maybe there were no servants in this house.

Luciana stood in front of the polished bronze monkey’s head, feeling both a longing to be inside and a longing to run away. She did not know the owner of this poor-looking house, who had agreed that it might be used as a secret rendezvous. Exactly whom was she meeting anyway? Why had she given her trust to a man she barely knew? What if, in asking for his assistance in acquiring the education her father had forbidden her, she had unwittingly invited instructions that would lead her to her death?

At last the door opened wide and it was too late to change her mind. Luciana’s lips moved but she could not find any words. She was transfixed, hypnotised, by the dark laughing eyes that met her own. Seeing her new teacher standing on the threshold of the house, filling the whole doorframe with his broad shoulders in a plain white shirt, Luciana was suddenly taken by the urge to throw her arms around his neck and beg him to bite her with those straight white teeth. His mouth, so sensual and generous, spread into a warm but wicked smile. When he took her hand to lead her into the house, Luciana felt the prickle of arousal over every inch of her skin. Confused and excited by the emotions the sight of her new friend aroused in her, Luciana had the distinctly unnerving feeling that he would be teaching her a great deal more than philosophy.

You never forget the first time you see Venice.

Leaving England on the 7.40 a.m. flight from Gatwick, all I could think about was how much I wished I were still in my bed. I left the house in pitch darkness. The cold London air bore intimations of snow. Now, just two and a half hours later, I was standing by the waterside in bright sunshine. The quay at Venice’s Marco Polo airport certainly made a change from the Victoria platform for the Gatwick Express. Though it was still only January, the warmth of those unexpected rays coaxed me to unfasten my coat and loosen the thick woolly scarf I’d expected to be wearing until April. I lifted my face to the sky and let the light pour over me like a creature coming out of hibernation. I stood there in a dream state, letting the heat find my winter-weary bones, until I realised that the crowd behind me was at last boarding a boat.

A Highland Pearl (Highland Treasures Book 1) by Taylor, Brenda B.
Catherine Coulter by The Valcourt Heiress
The Ruins (An Avernus Island Tale) by Jennifer Kohout
The End of Eve by Ariel Gore
Orgasmatron by Brynn Paulin
In Flanders Fields And Other Poems by John McCrae
Reapers and Bastards: A Reapers MC Anthology by Joanna Wylde
Codename Angel (The Angel Chronicles Book 1) by Jason Chapman
North Prospect by Les Lunt
The Perils of Command by David Donachie