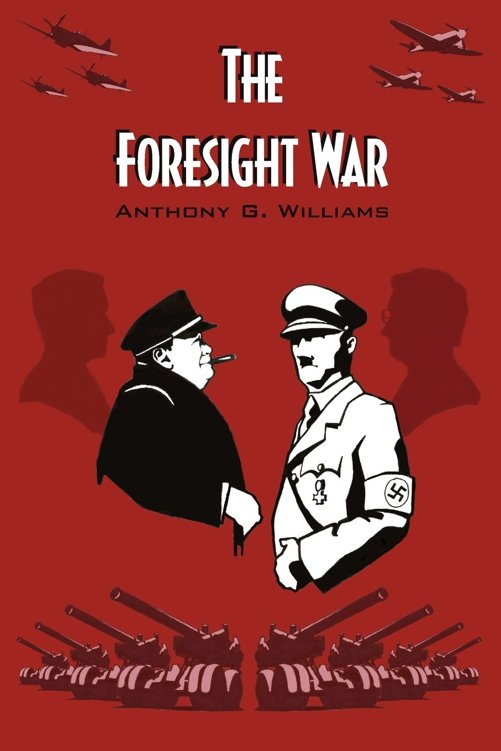 An alternative history of World War 2

Visit us online at
www.authorsonline.co.uk

All rights reserved. No part of this publication may be reproduced, stored in a retrieval system, or transmitted in any form or by any means, electronic, mechanical, photocopy, recording or otherwise, without prior written permission of the copyright owner. Nor can it be circulated in any form of binding or cover other than that in which it is published and without similar condition including this condition being imposed on a subsequent purchaser.

details
of which are available at
www.authorsonline.co.uk

Anthony G Williams is a military technology historian. He is the author of '
Rapid Fire: The Development of Automatic Cannon, Heavy Machine Guns and their Ammunition for Armies, Navies and Air Forces', and the co-author of 'Assault Rifle: the Development of the Modern Military Rifle and its Ammunition' (with Maxim Popenker) and the three-volume series 'Flying Guns: Development of Aircraft Guns, Ammunition and Installations' (with Emmanuel Gustin). 'The Foresight War' is his first novel. He maintains a website at:

He woke, and instantly wished that he hadn’t.

The throbbing headache which consumed him seemed to extend beyond his head into every part of his body.

He began to moan, but stopped abruptly as the ache intensified.

He lay unmoving, gritting his teeth, enduring in silent desperation.

After an indeterminate period, the pain subsided enough to risk an attempt at coherent thought.

What on earth had he done last night?

He was not a heavy drinker, and besides, the worst hangover he could recall was a pale shadow of this suffering.

Had he been in an accident?

He gingerly searched his memory, but could find nothing to account for such appalling agony.

Slowly, he opened his eyes to the dull light of early morning.

He was lying on his back, staring at a ceiling.

The ceiling was plain, with an old-fashioned frilly lampshade surrounding the single bulb.

The lampshade stayed steady and his head remained intact.

Adventurously, he turned his head sideways and immediately shut his eyes to ward off the surge of nausea.

Slowly, he opened his eyes again.

He took stock of what he could see.

The wallpaper was dull and also old-fashioned.

So
was
the varnished wooden door and the brown Bakelite light switch next to it.

He was certainly not in his bedroom, nor in anyone else’s that he recognised.

Curiosity overcoming the gradually receding pain, he raised his head.

A further effort brought a pair of discoloured brass taps into view, followed by a porcelain washbasin on a metal stand, framed and partly obscured by the foot of a brass bedstead.

A pair of brown leather shoes completed his field of view.

He wiggled his feet and the shoes moved in sympathy.

Turning his head to the other side, he saw a large wardrobe in dark wood.

There was nothing else in the room, apart from a wooden chair on which sat his holdall.

Experimentally he tried moving his legs.

The pain was fading rapidly now, and he swung his legs over the side of the bed with more confidence.

He appeared to be uninjured, and although weak and shaky, did not feel ill.

He was fully dressed, still possessed a full wallet and his keys, and he confirmed (after a careful stretch to the chair) that his holdall retained its usual contents.

Not a robbery, then.

A careful shuffle to the end of the bed gave him a limited view of rooftops with a larger structure some distance beyond.

At first, the rooftops caught his attention.

There was something odd about them.

The wisps of smoke rising from the chimneys was an unusual sight, but he suddenly realised that what puzzled him wasn’t anything he could see, but something he couldn’t see: there were no aerials;

not a satellite dish, not even the most humble antenna.

Something else nagged at him.

He looked at the structure in the distance.

It appeared to be an enormous, barrel-roofed greenhouse with towers at each end.

He stared at it blankly, until he gradually realised that his memory was telling him what it was, but his mind was refusing to accept the data.

He was looking at the
.

For a long time he sat unmoving, his mind jammed by the utter impossibility of the evidence of his eyes.

He could not deny what he was seeing: the pride of the Great Exhibition of 1851, moved from Hyde Park to a permanent home at Sydenham Hill, destroyed by fire in the 1930s.

Destroyed by fire in the 1930s – nearly seventy years ago!

His mind locked again and he fought desperately to regain some equilibrium.

He tried to think logically, to build on small steps.

How did he know this was the
?

Because he had seen pictures a hundred times, there was nothing of this size remotely like it.

How did he know when it was destroyed?

Because he was a historian, it was his business to know.

So which year did he think he was in?

How did he know that?

Because he was a lecturer at
, preparing for the next academic year.

Knowledge flooded back into him as if a dam had burst.

He repeated this out loud, to make sure it sounded right.

The sound of his own voice in the quiet room startled him.

He was forty years old, divorced five years ago, living alone in a flat in Kennington.

He couldn’t possibly be seeing the view out of the window, and as he never took hallucinogens he must be experiencing an extremely vivid dream.

The
floated serene and unperturbed in the distance.

He tottered to the washbasin, poured some cold water, splashed it into his face,
then
looked up.

This close to the window, he could see more.

The street was cobbled; near by was a junction with a larger road.

A couple pushed a pram across the junction, the woman in a long dress and coat, the man wearing a trilby.

The pram had huge overlapping wheels.

His mind dived for cover again and he forced it to work with an effort of will.

There had to be a rational explanation.

The simplest was that he was suffering from an intense delusion.

How this came to be, he had no idea.

Certainly life was much less rewarding these days, with steady increases in class sizes, pressures to research and publish, the obtrusive quality assessments.

Still, it wasn’t so bad that he was likely to have cracked under the pressure.

His discipline was his all-consuming interest, indeed a contributory cause of the failure of his marriage.

He knew more about the military history of the Twentieth Century than all but a handful of other academics and his life was in its study.

Suppose he had lost his sanity?

What should he, could he, do about it?

How should he behave?

Most immediately, what should he do now?

He realised that he would have to leave this room, and instantly felt a strong reluctance to do so.

The room was a little old-fashioned, but it was known, safe,
explicable
.

The outside world was another matter.

He forced himself to straighten up from the sink, walk to the chair, pick up his bag and walk to the door.

He braced himself, opened the door and walked out.

Afterwards, Don remembered little of the building he walked through.

It appeared to be some sort of low-cost boarding house but he met no-one to ask.

The street was equally deserted, so he walked to the junction with the main road.

The light breeze did not entirely dispel the smell of smoke.

Across the road there were some shops, one of them a newsagent.

He walked over, feeling an icy chill of apprehension.

A looming shape and the blare of a horn caused him to jump quickly to the pavement.

He entered the shop and approached the piles of newspapers.

The nearest had the headline ‘
THOUSANDS OFF THE MEANS TEST
’.

He noted vaguely that it was the
Daily Mirror
, and that the lead story was about Government efforts to help the workless.

It took a real effort to force his eyes to the date.

. His vision spun in front of him, and he grasped at the counter to stay on his feet.

‘Are you all right mate?’ He barely heard the concerned voice, but nodded and staggered out into the street. He began thinking again some time later, when he was already a distance from the shop.

He looked at his digital watch, which informed him that the time was
, and the date
.

He was only a few yards further down the road when the significance of the date struck him.

He kept on walking blindly and after a while realised that he was beginning to feel calmer, more relaxed.

There must be a limit to the amount of stress a mind could take before it began adjusting, accepting the current appearance of reality, no matter how absurd.

At least this particular delusion was remarkably consistent as well as detailed, with no obvious anachronisms.

Of course, that could simply reflect his knowledge of the times.

That being so, he reflected that he might as well behave accordingly: as if the delusion were reality.

What to do next?

He was already beginning to feel hungry and it was clear that this delusion required him to go through the motions of eating if he were not to become uncomfortable.

He had enough money to buy food, but when he stopped to check his wallet he found that it still held twenty-first century currency, useless in this context.

He would need to find someone to help him.

He noticed from the position of the sun that he had been instinctively walking north, towards the centre of London.

He had a long way to walk, but although it had evidently rained earlier, it was becoming warm and sunny.

It occurred to him that he was not without resources.

Some of the gadgets he possessed would be of great interest, and above all he had knowledge.

The thought struck him with such force that he stopped.

In this milieu, his knowledge was beyond price.

He was treating this delusion as if it were reality, but what alternative was there?

He was clearly going through some escapist wish-fulfilment fantasy, as there were few people as well-equipped as himself to provide useful advice about what to do over the next few years.

He might as well enjoy the opportunity and see what happened.

The obvious name came to mind.

After a while, Don dismissed the idea.

In 1934 Churchill was in the political wilderness, a notorious Jeremiah, always prophesying war.

He would be convinced readily enough by Don’s story but it was unlikely that anyone would listen to him.

He needed to speak to someone with authority, but not a politician who might consider only the party political implications.

After a while, he made up his mind and walked with more purpose, staring with fascination at his surroundings. The relative absence of motor vehicles made the walk more of a pleasure than he would have expected, but he had to smile wryly as he encountered his first trams. He recalled reading recently that London was considering the reintroduction of a tram system and wondered if the old tracks were still there, buried under the tarmac. He crossed the Thames by
, noting with a pang of nostalgia the steam train chuffing its way across the railway bridge to his right. He had forgotten, though, just how smoky the air would be, and how grimy the buildings in their layers of soot.