Read The Flag of Freedom Online

The Flag of Freedom 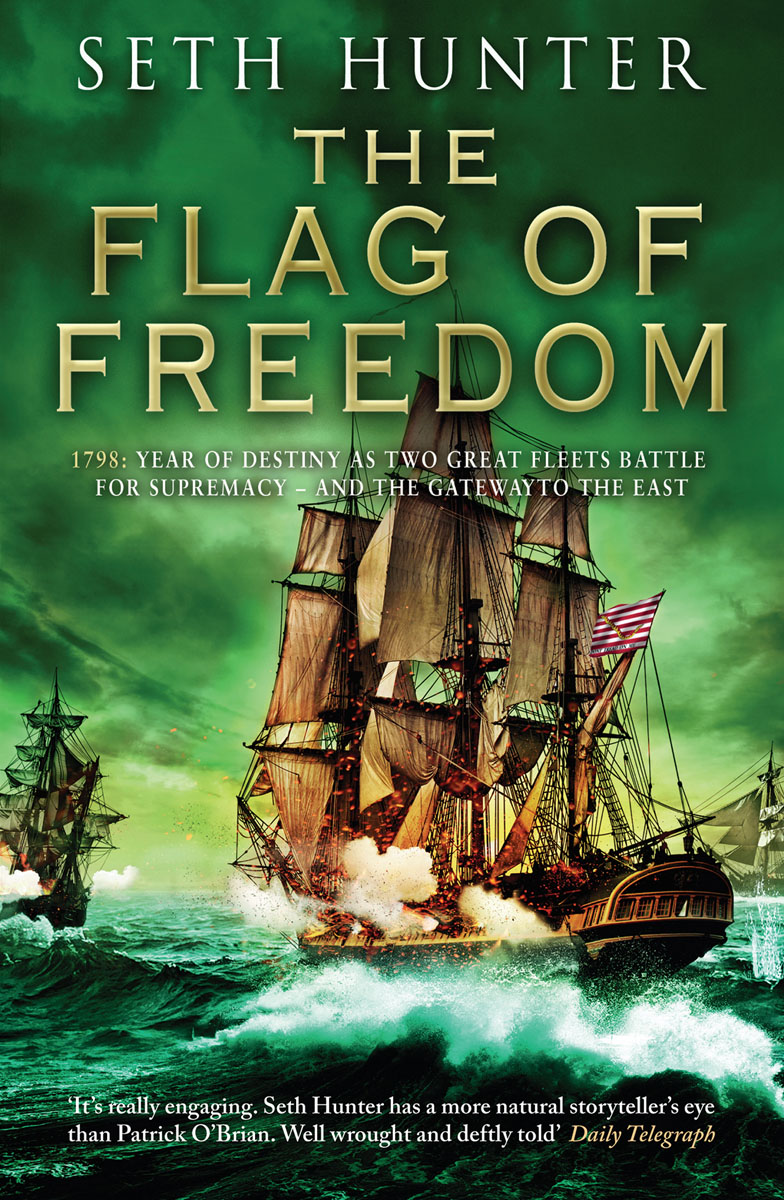 The Time of Terror

The Tide of War

The Price of Glory

The Winds of Folly

The Flag of Freedom 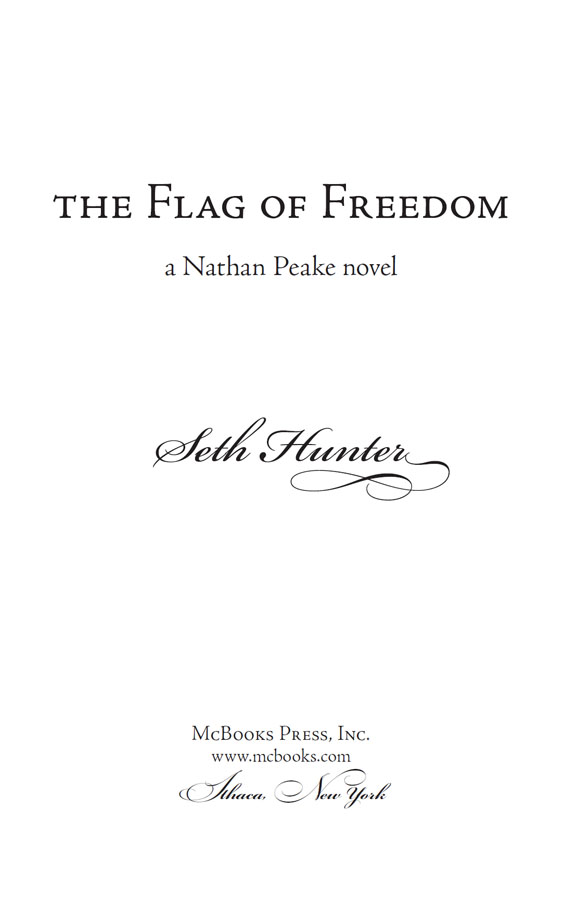 Copyright Â© 2012 by Seth Hunter. The right of Seth Hunter to be identified as the Author of the Work has been asserted by him in accordance with the Copyright, Designs and Patents Act 1988.

All rights reserved, including the right to reproduce this book or any portion thereof in any form or by any means, electronic or mechanical, without the written permission of the publisher. Requests for such permissions should be addressed to McBooks Press, Inc., ID Booth Building, 520 North Meadow St., Ithaca, NY 14850.

Apart from obvious historical figuresâall characters herein are fictitious and any resemblance to real persons living or dead, is purely coincidental.

âFrom the halls of Montezuma
To the shores of Tripoli' 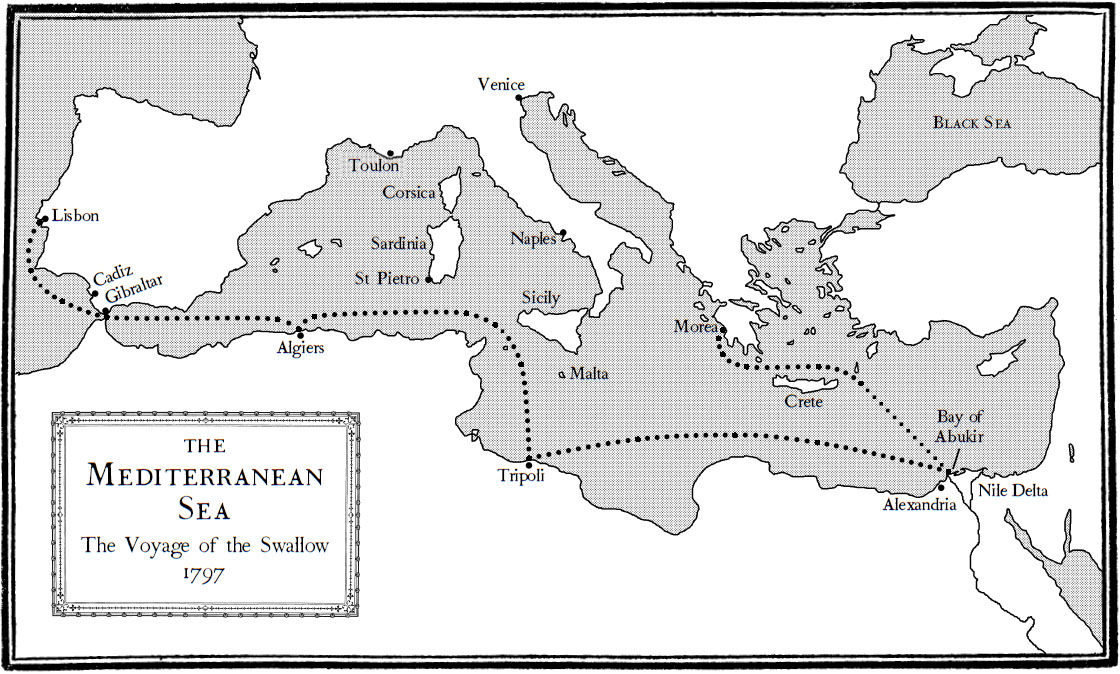 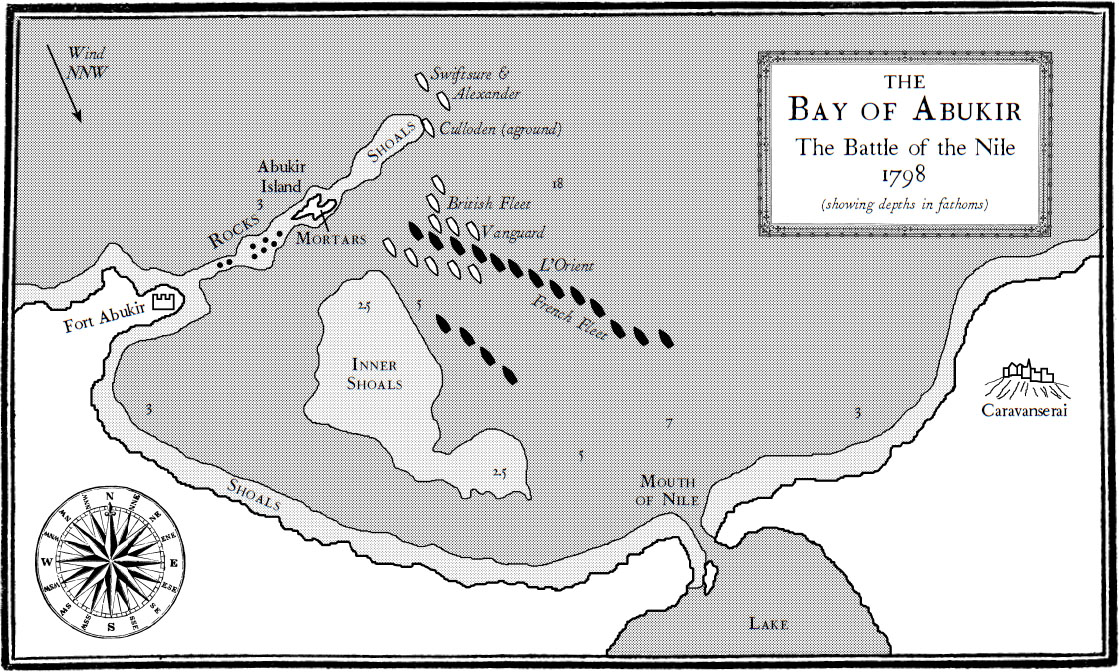 I
t was the last ship out of Venice before the French landed. Caterina was lucky to find a berth. She had never seen such panic. The harbour was crammed with people trying to flee the city by the only means remaining to them. Pushing, shoving, shouting, swearing â¦ it was like the worst days of Carnival. Some even wore masks, presumably to avoid being picked out by the French agents among the crowd, or more likely so they could push and shove and shout and swear without much risk of being recognised by their neighbours.

Everybody who was anybody was here. Masked or not, Sister Caterina identified some of the most illustrious names in the Golden Book: the noble elite of the Serene Republic of Saint Mark reduced to the status of refugees
or brawling fish wives in the marketplace. Anyone with the means to make their escape before the arrival of the invaders was doing so â with good reason to fear the fury of the mob if they stayed behind.

Caterina was ashamed. Ashamed of Venice, ashamed of her fellow Venetians, ashamed of herself. As a leading member of the Patriot Party, she had played an important role in the fight against the French â and had publicly announced her intention of continuing that struggle, even in a city under occupation. The Doge, however, had persuaded her to think again. It would, he said, invite reprisals.

And the French were very good at reprisals.

âWe must greet them with dignity and restraint,' he had told her â shortly before announcing his abdication and making off with whatever he could salvage from the wreck of the Republic. The last Doge of Venice.

So Caterina had gone, too, in her plainest, drabbest attire and without so much as a single servant to accompany her. She left the convent and her nuns to make what accommodation they could with their conquerors, and parted with a not insig nifi cant portion of her savings for a passage on the
Saratoga
, an American ship, homeward bound for Philadelphia after a profitable cruise in the Levant.

Caterina had no intention of going so far, of course. There were some things worse than the French. For an additional outlay the Captain was prepared to land her in Naples, where she had influential connections. People who shared her political sympathies. People who would help secure the defeat of Bonaparte and restore her beloved Venice, if not to its former greatness, then at least to a
position which would sustain a life of luxury and elegance for those with the wit and the charm to embrace it.

In the meantime, she did not get a great deal for her money. Her cabin was the size of a small wardrobe, which she was obliged to share with one other passenger; her bed a cot which resembled an instrument of torture in the Doge's prison; the sanitary arrangements would have disgraced a hovel in the poorer parts of the Veneto; the food was unspeakable.

Caterina made no complaint. Some level of inconvenience was inevitable in the circumstances, and it was nothing to the discomfort she would have had to endure at the hands of the French.

Her only real concern was the flag.

She ventured to mention this on one of her rare encounters with the ship's Captain on that restricted area of the upper deck where she and the other passengers were permitted to take the air.

It was their second day out of Venice. The wind was from the north-west â or so Caterina had been informed by an admiring officer who mistook her casual enquiry for passionate interest and embarked upon an elaborate discourse on the subject of winds and compass points. It did, however, reassure her that they were heading more or less in the right direction. The flag in question was streaming from a rope or some such fixture halfway up the mast â an especially large flag of vibrant design and colouring, not unlike the wrapping on a fruit candy.

âA fine spectacle, is she not?' the Captain remarked, as he noted the direction of her gaze. âAnd a fine history, for all that it is a short one.'

Or something of the sort. Caterina spoke adequate English â as well as French, Spanish, Latin and the Venetian dialect â but it was not English as the Captain spoke it. In fact, Caterina was not at all sure that what the Captain spoke was English at all. Certainly it was very different from that of the English Ambassador and those of his compatriots whom Caterina had encountered in Venice. She inclined her head politely, but something in her expression alerted him to a measure of doubt.

âOr do you not think so?' his tone was challenging.

The Americans were a sensitive race, Caterina had observed, especially where their nationality was concerned. Possibly because their independence had been so recently and violently wrung from the English, for whom they were loath to be mis took. And they displayed a particular reverence towards their flag. The one outside the American Consulate on the Grand Canal had been the biggest in Venice, bigger even than the flag of St Mark which had flown from the Doge's Palace â before it was flung down and trampled underfoot by the Revolutionists.

Caterina hastened to explain that she had nothing against the flag
in principle
and was appreciative of its history. But was it wise to flaunt it so openly, she wondered, in such perilous waters?

âFlaunt?' he enquired, tilting his head and scratching his jaw. âPerilous?'

He was a large man, his features gaunt and leathery from long exposure to the elements and his long greying hair un bound and unpowdered in the fashion of the French regicides. He looked a veritable ruffian, but then so did most Americans of her acquaintance, and yet she had
heard it said that he was a Quaker and serious in his devotions. Captain Fry.

Might it not attract the attention of certain
undesirables
, she persisted, shading her eyes to gaze up into his face and assuming an expression of anxious regard.

âUndesirables?' the Captain repeated with a frown.

She put it in the vernacular. âPirates,' she said.

The frown cleared. He chuckled agreeably. She was given to understand that she should not worry her pretty head about such things, which were more properly the concern of those with intimate knowledge of the maritime world.

âSay an Ave Maria, if you wish,' he advised her, being aware of her status as a nun. âMyself, I will rely upon those objects there,' indicating the twin rows of cannon upon the main deck, âin the unlikely event that we will have to use them. Ha ha.'

Caterina was not impressed. It would take more than eight small cannon to deter the undesirables she had in mind. But the Captain made it plain that he considered her opinion to be of little value. She was a nun; what did she know of the sea and those who sailed upon it?

Caterina was tempted to inform him that she knew a great deal more than he imagined â and a great deal more than she wished, in fact, for her last lover had been an Admiral and was inclined at times to be dogged in his instruction. But, of course, she did not tell the Captain any such thing. Americans, she had discovered, adhered to a strict moral code and were intolerant of any lapse in others. And though for the most part heretics, they appeared to have a far greater expectation of those in Holy
Orders than most Catholics of her acquaintance â certainly in Venice where her activities had achieved some notoriety over the years.

As Deputy Prioress and effectual head of the Convent of San Paolo di Mare, Sister Caterina Caresini had presided over one of the most successful and profitable casinos in the Serenissima. Indeed, it had been described, by detractors and admirers alike, as a âden of iniquity' where almost every vice known to man or woman might be indulged â for the right price â and where the Devil himself would have blushed at some of the excesses permitted within its walls.