Read The Five People You Meet in Heaven Online 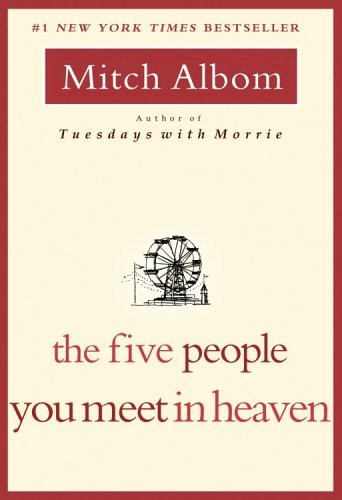 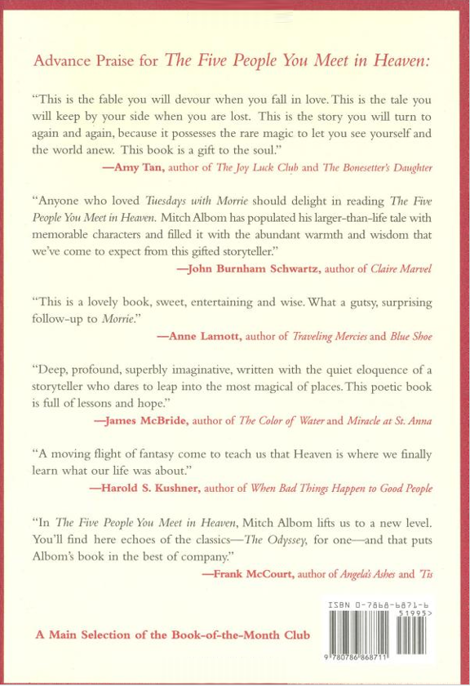 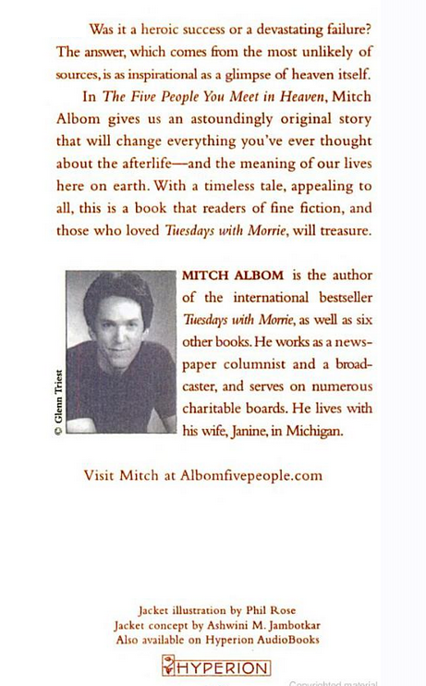 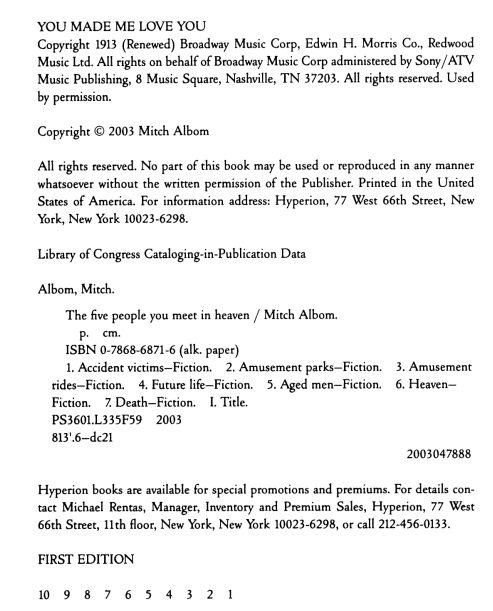 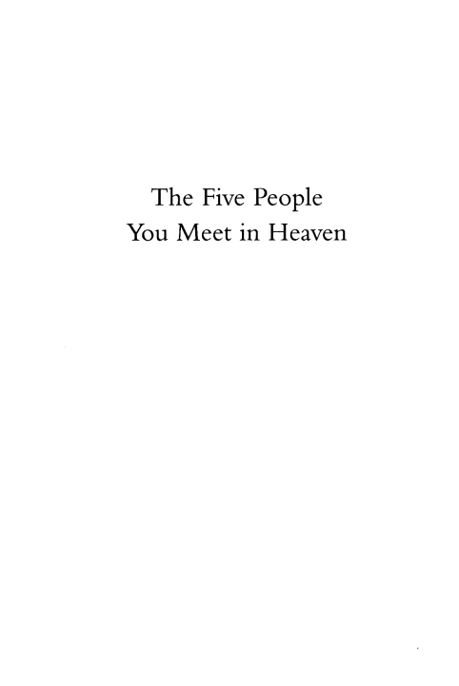 The Five People You

YOU MADE ME LOVE YOU

37203. All rights reserved. Used by permission.

All rights reserved. No part of this book may be used or reproduced in any manner whatsoever without the written permission of the Publisher. Printed in the United States of America. For information address: Hyperion,
77
West 66th Street, New York, New York 10023-6298.

The five people you meet in heaven / Mitch Albom.

This book is dedicated to Edward Beitchman, my beloved uncle, who
gave me my first concept of heaven. Every year, around the
Thanksgiving table, he spoke of a night in the hospital when he awoke
to see the souls of his departed loved ones sitting on the edge of the bed,
waiting for him. I never forgot that story. And I never forgot him.

Everyone has an idea of heaven, as do most religions, and they
should all be respected. The version represented here is only a guess, a
wish, in some ways, that my uncle, and others like him—people who
felt unimportant here on earth—realize, finally, how much they
mattered and how they were loved. 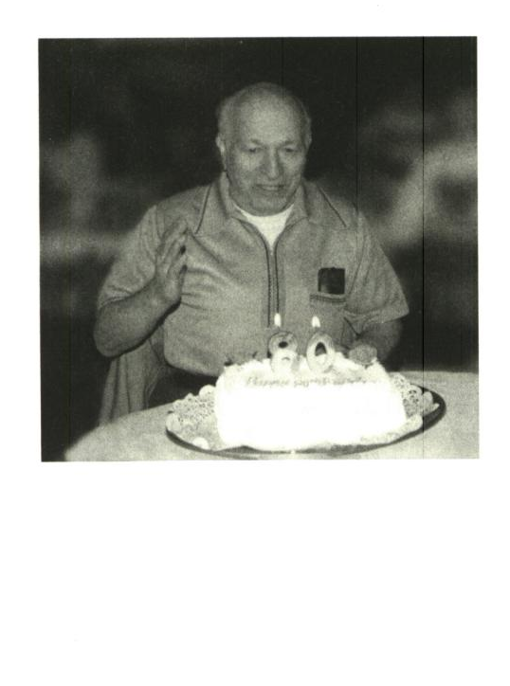 T
HIS IS A STORY ABOUT A MAN named Eddie and it begins at the end, with Eddie dying in the sun. It might seem strange to start a story with an ending. But all endings are also beginnings. We just don't know it at the time.

T
HE LAST HOUR of Eddie's life was spent, like most of the others, at Ruby Pier, an amusement park by a great gray ocean. The park had the usual attractions, a boardwalk, a Ferris wheel, roller coasters, bumper cars, a taffy stand, and an arcade where you could shoot streams of water into a clown's mouth. It also had a big new ride called Freddy's Free Fall, and this would be where Eddie would be killed, in an accident that would make newspapers around the state.

A
T THE TIME of his death, Eddie was a squat, white-haired old man, with a short neck, a barrel chest, thick forearms, and a faded army tattoo on his right shoulder. His legs were thin and veined now, and his left knee, wounded in the war, was ruined by arthritis. He used a cane to get around. His face was broad and craggy from the sun, with salty whiskers and a lower jaw that protruded slightly, making him look prouder than he felt. He kept a cigarette behind his left ear and a ring of keys hooked to his belt. He wore rubber-soled shoes. He wore an old linen cap. His pale brown uniform suggested a workingman, and a workingman he was.

E
DDIE'S JOB WAS "maintaining" the rides, which really meant keeping them safe. Every afternoon, he walked the park, checking on each attraction, from the Tilt-A-Whirl to the Pipeline Plunge. He looked for broken boards, loose bolts, worn-out steel. Sometimes he would stop, his eyes glazing over, and people walking past thought something was wrong. But he was listening, that's all. After all these years he could
hear
trouble, he said, in the spits and stutters and thrumming of the equipment.

"Folks," he mumbled, touching his cap.

They nodded politely. Customers knew Eddie. At least the regular ones did. They saw him summer after summer, one of those faces you associate with a place. His work shirt had a patch on the chest that read EDDIE above the word MAINTENANCE, and sometimes they would say, "Hiya, Eddie Maintenance," although he never thought that was funny.

Today, it so happened, was Eddie's birthday, his 83rd. A doctor, last week, had told him he had shingles. Shingles? Eddie didn't even know what they were. Once, he had been strong enough to lift a carousel horse in each arm. That was a long time ago.

Forty minutes until his death. Eddie made his way to the front of the roller coaster line. He rode every attraction at least once a week, to be certain the brakes and steering were solid. Today was coaster day—the

"Ghoster Coaster" they called this one—and the kids who knew Eddie yelled to get in the cart with him.

Over the years, Eddie figured he'd seen every sort of do-nothing, snarl-at-you teenager there was. But children were different. Children looked at Eddie—who, with his protruding lower jaw, always seemed to be grinning, like a dolphin—and they trusted him. They drew in like cold hands to a fire. They hugged his leg. They played with his keys. Eddie mostly grunted, never saying much. He figured it was because he didn't say much that they liked him.

"No party or nothing?"

Eddie looked at him as if he were crazy. For a moment he thought how strange it was to be growing old in a place that smelled of cotton candy.

Hope by Sam Rook
Timbuktu by Paul Auster
Wicked Wager by Mary Gillgannon
The Sounds of War (The Genesis Series Book 2) by Sue Watkins
Sharing Space (The Complete Series) by Perez, Nina
Marked Clan #2 - Red by Maurice Lawless
Dead If I Do by Tate Hallaway
Anthology Of Nude Photography By Dani Olivier by Olivier, Dani
Infected by V.A. Brandon
Kiss of the Dragon by Nicola Claire