Read The Faith of Ashish Online

Tags: #Book 1 of the Bless ings of India Series 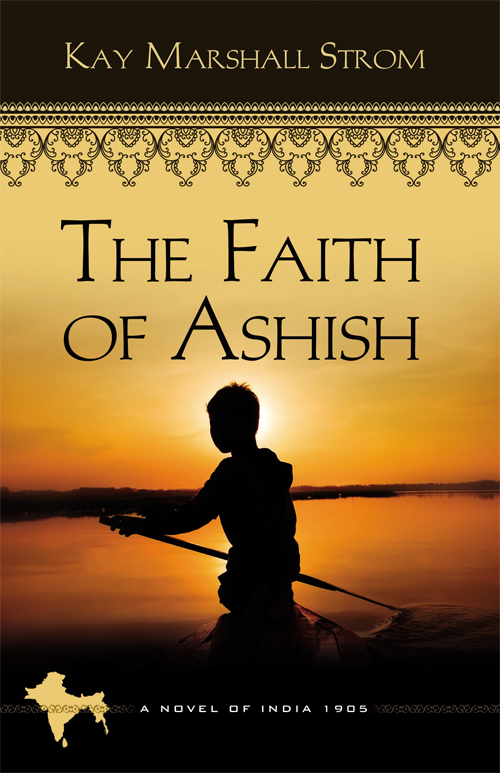 The "Grace in Africa" Series

The Voyage of Promise

The Triumph of Grace 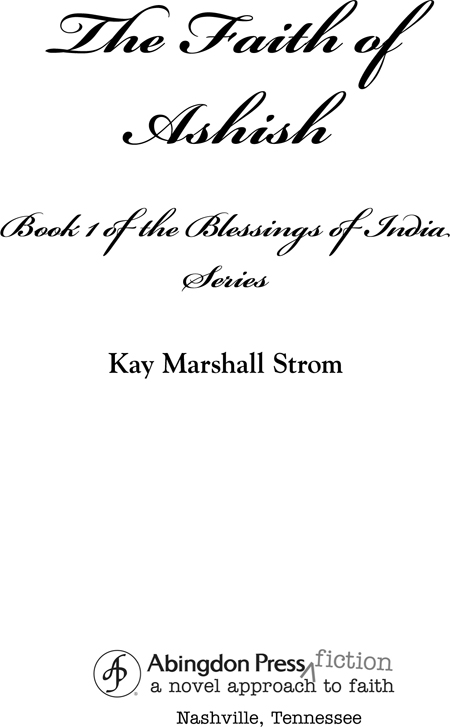 No part of this publication may be reproduced in any form, stored in any retrieval system, posted on any website, or transmitted in any form or by any means—digital, electronic, scanning, photocopy, recording, or otherwise—without written permission from the publisher, except for brief quotations in printed reviews and articles.

The persons and events portrayed in this work of fiction are the creations of the author, and any resemblance to persons living or dead is purely coincidental.

Published in association with the Books & Such Literary Agency, Janet Kobobel Grant,

I gratefully dedicate this book to my many friends in India who continue to fight for the rights of Dalits—formally known as Untouchables. They are too numerous to name, but God knows each one.

A special debt of thanks to Kolakaluri Sam Paul. Several years ago I met Sam Paul in Ireland where he was speaking on present-day slavery as it exists in India. He told me, "You should write a book about the Dalits in India. Please, let people know about us."

Thank you so much for the challenge and inspiration.

India in the twentieth century . . . what a panorama! What a story! I could never have dreamed of attempting such a work without the help and encouragement of so many knowledgable people.

First, I must thank Kolakaluri Sam Paul for planting the seed for this project. At the time, we were both in Ireland traveling with the movie
Amazing Grace,
and Sam Paul was speaking about major forms of slavery that still exist today. It was he who challenged me to write a book about the plight of India's Outcast es. Two years later, Barbara Scott, my editor at Abingdon Press at the time, watered that seed when she said, "Have you considered writing a trilogy set in India?"
Blessings in India
is the full-grown result.

I thank two organizations important to me: She Is Safe (SIS), formerly Sisters In Service, and Partners International, for introducing me to India and to so many wonderful people there. I especially appreciate Michele Rickett, president of SIS, and Cherylann Sammons, area director. We have spent many weeks together in many places!

During my trips to India, I have met so many wonderful people who have introduced me to this great country and bound me to it in unforgettable ways. I wish I could list them all. I especially appreciate Bishop Moses Swamidas who, through his writings and personal stories, opened up India's past to me. I also thank Dr. B. E. Vijayam, renowned Indian scientist whose innovative approaches have helped change the face of India in so many ways, and his wife, Mary. I thank P. T. George for the Indian understanding he has afforded me. I also so appreciate the help and advice of Jebaraj Devashayam. Since he is himself a gifted writer, he has a particularly good eye for details and was able to point out cultural facts I never could have discovered on my own.

A warm and loving thank you to my best editor, my husband, Dan Kline. How I appreciate you. And I also thank my faithful reader/editor/friend, Kathy Force. What would I do without you?

The Faith of
Ashish

A
small boy, his brown body sticky with sweat, stretched up on his tiptoes and grabbed an earthenware cup from the rim of the well. Water sloshed over the child's hands. The cup was already full—a fortunate thing, for the little one was too small to draw water by himself. He grasped the cup tightly in both hands and drank till it was empty.

Only then did the little one notice men running toward him. He didn't see the angry, snarling looks on their faces, though, because the glaring sun blinded him. The boy, his curiosity growing, rubbed his fists over his face and shaded his eyes.

A man rushed toward the boy. He raised a stick over his head and, without warning, smacked it down across the child's back. The little one screamed, "
Appa! Appa!"
but his father wasn't there to help him. The man cut the child's cries short with another blow, this one so hard it knocked the boy's breath out of him. When the little one managed to force his dark eyes open again, he saw still more men rushing toward him. He wanted to scream, but he couldn't. He could hardly catch a breath. Someone kicked him hard. Someone else pounded on him. Again and again and again.

The next smack flung him hard against the side of the well, mercifully knocking him senseless. He didn't feel the rest of the blows.

When the men left, the boy lay still in a tiny crumpled heap.

Y
ou know what you must do," Latha said.

Virat knew. Though it could cost him his life, he knew.

On the mat in the far corner of the hut, little Ashish moaned in pain. Virat could not bear to look at his son, so battered and broken. Instead, he busied himself with his dingy
mundu.
He untied the long strip of cotton from around his thin body and stretched it out as far as his arms would reach.

"I wove a new broom for today," Latha said to her husband.

Latha held the long stems of the bundle of twigs firmly against her husband's back, and Virat rewrapped his
mundu
around both him and the bound ends. He pulled the cloth as tightly as possible in order to hold the broom in place. The garment must stay flat and smooth, though, with no folds. Untouchables were forbidden to wear folds. Caste rule. And caste rules must never be broken.

Even on this terrible day, Latha took care to adjust the jagged edges of the twig broom in such a way that they would not snag a hole in the worn cotton of Virat's only garment.

Latha knew each crease on her husband's dark face, every cadence of his gentle voice. They had walked side by side through sorrow and disaster; they had journeyed together through want and despair. But never before had she detected the hoarse tremble of raw fear that now tinged his words. With all her might, Latha shoved at the broom. Jagged twigs clawed into her husband's bare back. Latha winced as blood ran down his brown skin, but Virat made no complaint.

Padding silently on calloused feet, Virat moved across the dirt floor to the sleeping mat he had dragged inside in order to protect his son from curious eyes. Damp locks of black hair framed the boy's swollen face. Virat reached out toward his child, but the broom on his back wouldn't let him bend down. So he stood stiff and straight, like a brown tree that cannot bend in the wind, and stared at his little one.

When Virat left the hut, Latha did not follow behind him as required of a proper Indian wife. Instead, without apology, she walked by her husband's side.

Latha plucked a dirty string from her husband's outstretched hand, looped it around his head, and carefully positioned it above his ears. She left the string loose, but tied the ends together in a knot. Virat slipped a flat tin cup over his mouth and pushed it securely in place under the string.

"Take it off!" Latha insisted. "Do not wear that awful thing here! This is our side of the village!
Our
house!"

"The new drum," Virat said through the tin cup. "Hand it to me."

As Latha fetched the drum, the door of the hut creaked open and little Ashish blinked out at the morning sun. Moving painfully, he shaded his bruised eyes and stared about him with a blank expression until he caught sight of his father—drum in hand, tin cup tied over his mouth, broom hanging down his back.

Virat yanked the cup away from his face.

"Get back to the sleeping mat!" he ordered. "Now!"

Virat hadn't intended to be harsh with the boy. But the child had taken him by surprise. And once the words were out of his mouth, he couldn't take them back again, no matter how much he might wish it. Sadness flooded over Virat and washed away all the gentle things he would like to say, leaving him speechless. He couldn't think of one single word. So he simply shook his head and turned away.

With the drum tucked under his arm, the tin cup clutched in his hand, and the string still dangling over his ears, Virat called back to Latha, "Sacrifice the piglet to the village god. Implore the god to guide my steps. Plead with him to make a success of my journey."

Latha opened her mouth, but her words drowned in tears.

"Should I die, wife, take the boy and follow the road toward the mountains. It will lead you back to your father's house."

Virat, the Untouchable . . . Virat, the accursed . . . Virat, the despised outcaste . . . set his feet on the path that separated the familiar settlement of his lowly kind from the far side of the village, home to high caste warriors and kings and Brahmin priests.

And nothing would ever be the same again.

B005S8O7YE EBOK by King, Carole
Samantha Moon: First Eight Novels, Plus One Novella by J. R. Rain
Aftershock: A Collection of Survivors Tales by Lioudis, Valerie, Lioudis, Kristopher
The Seekers: The Story of Man's Continuing Quest to Understand His World by Daniel J. Boorstin
Whittaker 01 The Enemy We Know by Donna White Glaser
Brando by Marlon Brando
Death in Twilight by Jason Fields
02 - Taint of Evil by Neil McIntosh - (ebook by Undead)
THE CALLAHANS (A Mafia Romance): The Complete 5 Books Series by Glenna Sinclair
The Last Free Cat by Blake Jon