The Etsey Series 1: The Seventh Veil 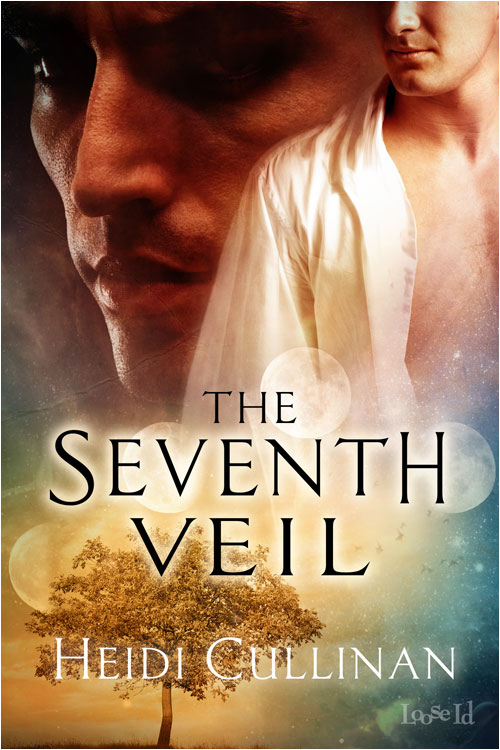 The Etsey Series 1: The Seventh Veil

because you are
ma quiera

because you are this book’s biggest fan.

Thanks to the many readers, assistants, and fans over the years, especially Dan Cullinan, Caryle Guffey, Crystal Thompson, Chandra Years, Catherine Duthie, Chris White, the cherries, the Glindas, the whiners, the walri, and my LJ friends who have been hearing me carry on about Charles and Timothy for a long, long time.

Fire is the first element of creation. Fire is the spark that begins all life.

Fire is wild—untended, it can burn. Fire is clinging and dependent.

Without fuel, it dies.

In a dark, close room at the back of a dockside inn, there was a bed and nothing else.

The bed itself was old, sagging at its center, and it stank. Despite its wear from years of use, not a single person had slept a night upon it, though a few had passed out briefly within its confines. No one had ever dreamed of airing it, though at one point someone had swapped sheets with another bed when one of its occupants had left some sick on the coverlet. Its pillows had been stolen long ago, but they’d been only stain-filled accessories for those desiring more creative sexual positions or a means of stopping the breath of one whose partner had feared a loose tongue. It was a dirty, filthy bed in a morally bankrupt establishment, available to anyone who could plunk down the coin to rent it for an hour.

It was Charles Perry’s favorite bed.

Goddess knew it was practically a passive delivery system for disease, and there was that horrible lump in the middle of the left side that always managed to ram itself into Charles’s thigh just as he was about to come. But—well, in fact, yes, Charles loved this bed, not for what it was but for what it meant to him. In this inn and in this bed, no one asked questions. It was the worst whorehouse in the city, but it was popular because here he would not get arrested. And because Charles was such a loyal, frequent customer, and because his grandfather’s fat purse was open to him so long as he was discreet, Charles had this particular bed reserved. When he came to the Randy Sailor with a man or a woman, the proprietor simply smiled, passed him the key and a bottle of wine, and wished him well.

Tonight Charles had come with a man
and
a woman, but not even this had made old Bimsy blink. Charles was having more trouble with his doxies, to tell the truth. The man was squeamish at the idea of a naked woman in bed with them, and clearly the girl’s Hainian accent had been as fake as the rest of her, because it was pure Etsian revulsion she’d expressed when she’d caught Charles kissing the man when she’d come back from the loo. “
A bloody molly
!” she’d whispered angrily to another whore lingering at the bar when she thought Charles had gone upstairs. “
He wants to fuck that dark bugger, then stick it in me
!”

Charles had nearly let her go then, but she’d pasted on a smile when she went into his arms, and after he fished out a dram for them both to sniff, he’d found her revulsion almost amusing. “
I don’t want to stick it in both of you
,” he had told her, tugging at the laces to her bodice. “
I want to stick mine in you while he sticks his in me
.”

And after some drunken fumbles and a great deal more drug, this was precisely what they had done. There had been some kisses, and there had been some sucking, but mostly everyone was ready for the fuck, and they had quickly gone straight to business. The girl lay back on the bed, her head lolling off the side, her legs thrown over Charles’s shoulders as he’d wedged himself inside her. The man came up behind, whispering nasty, incoherent Tansian into Charles’s ear as he’d gripped Charles’s biceps and found his position. Charles cried out as he entered the woman, and so did she, and then the man cried out as he entered Charles, and then it had been nothing but sensation and heat, and then, blessedly, there had been release.

Now the man and the woman Charles had hired for the night were curled up beside him in his favorite bed, drifting in and out of consciousness, purring in the afterglow of sex and the lingering effects of Hain’s finest illegal substances. Charles stroked their naked necks and sweaty tendrils of hair. This was why he loved this room, this bed: because here he could find peace. This was why he kept coming back to the docks, despite his grandfather’s disgust for the habit. And to be here with a man and a woman at once, however awkward the herding had been, to lie here like this was worth it all. For this single, fleeting moment, he felt happy. As his blood pounded and the drug blasted his brain, he knew a fragile peace, and he reveled in it, letting it expand around him.

When the woman would have risen, he kissed her and urged her gently back down beside him.

“Just rest,” he said. “Rest and enjoy the moment.”

She wrinkled her nose at him, but she smiled too, the indolent leer of one high and sated. “Are you one of the Goddess chasers?” she asked, her false Hainian accent only half in place. “Did we fuck so you could ‘touch the divine’?”

Charles laughed and touched her nose. “You’re the only goddess I believe in”—he tried to remember her name and failed—“darling.” He kissed her lips, then turned to nuzzle his male companion as well. “The pair of you are the only Lord and Lady I need.”

The girl giggled, nipped at Charles’s nipple, then settled down beside him again.

And then, though it was far too soon, the light shifted, and the peace came to an end right then and there.

There were shadows everywhere, but now those shadows began to move. Slowly at first, hesitant, and as they grew more confident that they had found him again, they moved with purpose and deliberation.

They should never have been able to find him here.

It was not the drugs that made the shadows shift about the room. It was supposed to be the drugs that
stopped
this. They still purred inside him, making the room swim and dance in colors only addicts knew, and Charles’s cock was still half-hard, but as he stared at the edges of the room, the dark shapes were already rising. They were thick, gray mist curling against the floorboards, the walls, the handles of the windows, and the knob of the door.

They were here. The wraiths were here again.

They can blast through both drugs and sex now, Charles realized, despairing. Though he turned his head away, he didn’t close his eyes, knowing that the gesture would only make his suffering worse. In that darkness, they were terrible. He stared at the pretty man beside him instead: dark, so dark, his skin like smooth chocolate, his lips so fat and plump, just like his lovely, perfect cock. Charles tried to focus on the sex, sliding his hand down to the other whore’s breast, teasing it, making her gasp.
Yes. Yes, let us lose ourselves again in pleasure. Make them go away, my lovelies. Make them go away.

But the wraiths had their grip on him now, and Charles suspected not even the most carnal of lovemaking or a priceless dram would chase them off now. And even as the woman began to coo and slide her hand down his stomach to Charles’s naked sex, even as he shut his mind to nothing but cock and cunt and carnal acts, he was still lost, because the mist was curling now around the bed and rising up its sides. He looked up and found the shadows were on the ceiling. Charles turned to the male whore, staring at the beautiful expanse that was his chest, but the wraith mist was curling around him too.

“Help us,”
it whispered.

The woman sat up, confused, then narrowed her eyes as she saw Charles’s face. “You’re doing it,” she said accusingly. She nodded at the door. “Marie said you did this, that after you fucked, you went all strange.”

“What is this?” the male whore asked, sitting up and rubbing his eyes.

“It’s nothing,” Charles said quickly, then winced as he watched a smoky finger form against the man’s sweaty neck.

“He sees things,” the woman said to the man. “Unnatural things. Ghosts. And worse.”

Michael O'Leary by Alan Ruddock
The Sultan of Byzantium by Selcuk Altun
Dawn of the Aspects: Part II by Richard A. Knaak
The Book of Someday by Dianne Dixon
Inception (The Marked Book 1) by Bianca Scardoni
Kiss of Darkness by Loribelle Hunt
The World Was Going Our Way by Christopher Andrew
The Heiress by Lynsay Sands
And Nothing But the Truth by Kit Pearson
RAGE (Descendants Saga (Crisis Sequence One)) by Somers, James