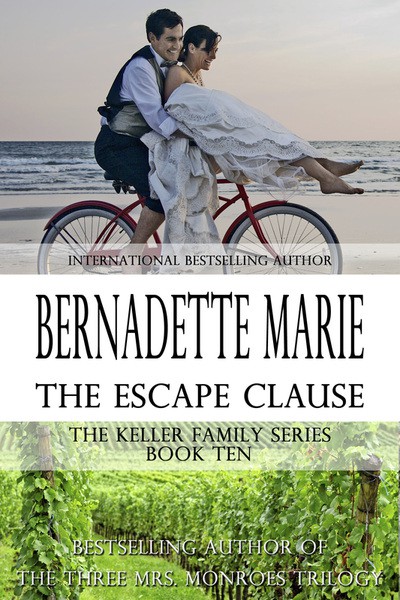 This is a fictional work. The names, characters, incidents, places, and locations are solely the concepts and products of the author’s imagination or are used to create a fictitious story and should not be construed as real.

All rights reserved. No part of this book may be used or reproduced in any manner whatsoever without written permission, except in the case of brief quotations, reviews, and articles. For any other permission please contact 5 Prince Publishing and Books, LLC.

Thank goodness you were my Escape Clause!

For Stan who was my escape nearly 25 years ago. Thank goodness you were under that window!

For my 5 Princes, you are my greatest inspiration when it comes to building the dynamics of these families.

For Mom, Dad, and Anni thank you for all things.

For Connie, Clare, and Marie who had bets against me? Hands high~because you’re all here holding my hand it all got done.

For June and Connie who dot every I and cross every T, thank you.

When I first penned The Executive’s Decision in the doorways of my children’s rooms when I put them to bed at night, I never would have imagined it would become he beginning of a 10 book series.

The outpouring of love for these characters surprised me and made me want to build families my readers could fall in love with each time.

Avery Keller’s story and her love affair with Pete Grant concludes the Keller Family Series. Having followed Avery through her entire life (including my readers having named her) is bittersweet. However, you will be able to catch up with the family in a series of novellas that will be released in the next few years as part of anthologies.

Thank you for falling in love with the Kellers. I hope you’ll enjoy the families that are yet to come.

Hospitals were Avery’s least favorite place to be. She had to admire her father for choosing a career that had him bound to them for so many years.

As the day of her birthday slipped away and a new day began, she sat in the waiting room with her family.

She wondered if this was the similar scene twenty-six years ago when she and her cousin Spencer were born. Her parents surrounded by family and in another room her aunt and uncle surrounded by the same family.

Spencer was only an hour older than she was and they’d shared every birthday together since that first one. And now, after their celebration, her cousin Christian’s wife Victoria was in one room of the hospital in labor and her cousin Ed and his wife Darcy were in another.

She’d watched as Ed and Christian’s parents, her aunt Madeline and uncle Carlos, went from room to room. Their sister Clara sat across from Avery rubbing her very pregnant stomach.

The Keller family was being bombarded with babies and now her cousin Tyler and his wife Courtney were expecting too.

Pete walked up next to her and held out a paper cup of coffee from the vending machine. “Best we can get at one in the morning.”

She graciously took it as he sat down. “Thanks. My head is still swimming from all the wine I drank.”

He gave her a small nudge. “Lush,” he said with a chuckle and then began to blow on his coffee.

For a moment, Avery just watched him. Pete Grant had been her dearest friend her entire life. He’d bowed down and played dress up a few times. He’d taught her how to bounce a soccer ball on her forehead. Thinking back, he’d even canceled his own prom date to take her when her date backed out. He was that kind of friend.

And now here he was, sitting in a hospital at one o’clock in the morning waiting out babies with her and her family.

She rested her head on his shoulder and he pressed his head to hers.

It was nice to be so comfortable around a friend. He was easing that jealousy she’d been feeling. He’d make someone a good husband someday.

Around two o’clock, Christian walked out into the waiting area rubbing his eyes. Their Aunt Arianna jumped to her feet.

He shook his head. “Her contractions stopped. They’re going to let her rest for a little bit. See how it goes. If they need to induce her, they will later today. The baby is ready, just not cooperating.”

Avery was sure everyone in the room, who was awake, wanted to make some comment to the lack of cooperation and aim it at Christian. However, the look on his face—that look of worry—had them all remaining quiet.

Victoria had lost their first child. As Avery’s father had told them, it just happened. But Avery was sure neither of them ever got over it—how could they?

She turned her face into Pete’s shoulder so that his shirt caught the few tears that were threatening to spill.

“Are you okay?” His voice was a whisper and so gentle.

“Just worried for them.”

Pete moved his hand over hers and gave it a squeeze. “Everything is going to be okay. Babies have their own agenda, and it isn’t ours.”

She supposed he knew what he was talking about. He had four sisters and a brother. His family was as close as her extended family. She, of course, was an only child. It had never felt like that though. There probably wasn’t a day in her life where she hadn’t seen one of her cousins, aunts, or uncles.

As she turned her hand over in his and locked their fingers, she realized they were both blessed to have that. Now all they had to do was find that right person, for each of them, that could make them happy forever.

A few minutes later Ed staggered into the waiting room. The clothes he’d worn to Avery’s party were now under a paper robe. He had a mask down under his chin and a paper hat over his hair. Darcy had gone into labor at the same time as Victoria. However, their baby was breech and more excited to meet everyone as she was scheduled the following week to have a Caesarean. But, now was a good time too, Avery thought as she looked at her cousin with his enormous grin.

Christian was the first to step to him. “Well?”

Christian pulled his brother to him in a hug that had Avery’s eyes filling fuller with tears.

“I’m happy for you,” Christian said patting his brother’s back and looking at him. “She’s healthy and Darcy is okay?”

“She’s perfect. Oh, she’s perfect. And Darcy is wonderful. She’s in recovery and Mom and Regan are with her.” He looked around the room.

In the corner, he found his father asleep in a chair with his daughter Emily asleep on his shoulder.

Avery watched as Ed moved to them. He touched his father’s hand, waking him up.

“I know she’ll never understand this, but I want to take her to see her sister.” He rolled the little girl from his father’s shoulder and she stirred. “Hey, big sister. Let’s go see your baby sister.”

Avery wasn’t sure that at ten months little Emily, whom Ed and Darcy had adopted, had a clue as to what was going on, but they’d all remember.

Pete turned to look at Avery.

“You look exhausted. Why don’t I take you home for a while? It doesn’t sound like Victoria is going to have her baby tonight.”

She hated the thought of leaving, but she knew it made sense. She could go home, get a few hours sleep, and be right back there in the morning to wait out another baby.

Avery looked at Clara uncomfortably seated in the chair across from her and Warner rubbing her back to comfort her.

That jealous pang hit her chest again. Perhaps she should go home for a little bit.

“Okay, let me say goodbye to my parents.”

Pete watched as she everyone that stayed and waited. He’d have to call his own mother in the morning. Avery’s family had been close to his family for years. They’d want to know about Ed’s little girl, whom he’d forgotten to get her name. Maybe they didn’t have one yet.

Avery yawned as she walked toward him. He placed his arm around her waist and she his as they walked to the elevator.

As the doors opened and they stepped in, he hit the button for the lobby.

Avery nodded. “Did you see the new jewelry on Julie’s finger?” She made the comment perhaps a bit too snippy. “No wonder Spencer left our birthday party early.”

“I thought it was the pink and black cake you made him have…again.”

That brought a bit of a smile to her lips. She did like to torment her birthday-twin cousin by designing the color theme every year—pink and black.

Pete took her hand and brought it to his lips. Pressing a kiss to her fingers, he said, “I can’t think of a better reason to leave a party than to go get engaged. If that’s what they did.”

“Why else would she have a ring like that?”

He shrugged. But he knew that Spencer was all class. Right now, it was Darcy and Ed’s moment and soon it would be Christian and Victoria’s moment. He’d have time to share the news if there was any.

When the doors opened, Pete kept hold of Avery’s hand and walked her to his car in the parking garage. She was silent on the walk. He opened the door for her and waited until she was comfortable before walking around and getting in himself.

“Thank you for being here with me,” she said wiping tears from her eyes. “I seem to be a little emotional about it all.”

“You deserve to be. But, Avery, you know there isn’t anywhere I’d rather be than with you.”

That caused her to chuckle. “You need a woman,” she retorted as he started the engine and backed out of the parking space.

“I guess if one comes along. For now, I’ll just spend my time with you.”

She reached for his hand and held it in hers. “I don’t want to be alone tonight. Will you stay with me?”

Pete shrugged. “I could. Do you have a fan for that spare room? It gets really hot in there.”

Avery nodded. “Yes.” She then leaned over and rested her head on his shoulder. “You’re too good to me.”

“I’m going to miss you when I move away,” she said and he felt every muscle in his body tense.

“I was hoping by now you’d changed your mind.”

The thought of her moving to France to run some vineyard that her grandfather, whom she didn’t know very well, had bought for her had his blood hot. Her parents weren’t going to like it too much. Hell, he didn’t like it too much. But what could he say?

He’d longed for her as long as he could remember and she didn’t seem to have the same feelings. What more could he do than to support his dearest friend in her new adventure?

[Wexford 01] From Doon & Death by Ruth Rendell
Lessons for a Sunday Father by Claire Calman
WHY I WRITE: ESSAYS BY SAADAT HASAN MANTO by AAKAR PATEL
Watching You by Gemma Halliday
The Letter Killers Club by Sigizmund Krzhizhanovsky
What's a Girl Gotta Do? by Holly Bourne
Frankenstein Theory by Jack Wallen
Questions Of Trust: A Medical Romance by Archer, Sam
Shield of Refuge by Carol Steward
Sam Kincaid 01 - The Commission by Michael Norman