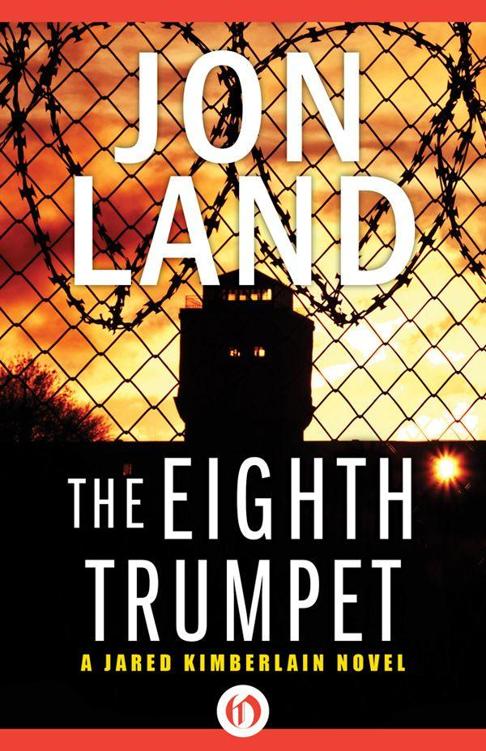 For Walter Zacharius, who took a shot
and
Daniel Zitin, who took another

A Biography of Jon Land

A Sneak Peek at
Strong at the Break

“GATE, THIS IS CENTRAL
. Convoy is approaching.”

“Roger that, Central. I can see their headlights.”

At the central monitoring station in the mansion’s front foyer, Nelson leaned closer to one of the three screens that provided a complete view of Ridgepoint Circle, the only access road to the Lime estate. He could see the limousine clearly now, squeezed between a pair of trailing cars and single leading one. His earpiece filled with the heavy
wop-wop-wop
of a helicopter an instant before a new voice came over it.

“Central, this is Sky Chief. All clear to the rear.”

“That you, Nellie? What’s up, pulling a double shift?”

“Other guy called in sick. Just call me lucky.”

Nelson sneered, and his eyes turned to the view from the front gate camera, which was just now picking up the limousine’s approach. Under close observation from the chopper, the convoy’s journey from midtown Manhattan into the wooded heart of northern Greenwich, Connecticut had proved uneventful. Nelson had planned to be home in bed himself by now until orders came down assigning him to spend the night with a bank of twenty closed-circuit monitoring screens.

One thing about high-tech security, Nelson reckoned, after watching a pair of armed guards usher Jordan Lime through the foyer and up the spiral staircase, was that it totally removed anything even remotely resembling privacy. Hell, three of the twenty screens before him broadcast views of the man’s bedroom. The billionaire couldn’t even take a shit without being eyeballed the whole way.

Of the remaining cameras, four provided pictures of other areas within the mansion while ten tirelessly watched the grounds beyond. In addition to the standard lens, each of the cameras was equipped with an infrared optic nerve that received signals from transmitters worn by the dozen guards who patrolled at all times. That way, if an intruder managed to somehow bypass the eight-foot-high electrified fence that enclosed the estate, the camera would trigger an alarm and proceed to follow his path, automatically passing him on to the next camera when the grid changed. There was no room for human error. Amazing what $25,000 a day could buy you.

Nelson sat before the monitoring board and watched Jordan Lime make his way to his third-floor bedroom. Two guards followed close behind. The stairway camera had given way to the one mounted on the corridor, and Nelson focused on another pair of Pro-Tech guards standing outside the electronically sealed chambers. Lime approached, greeted them, and inserted a flat, square pad into the slot tailored for it. There was a click, and the door parted from its seal. Once Lime was inside, the door could be opened again only by him or by the monitor on duty—in this case, Nelson—who possessed the sole other access card. This was to protect clients against the possibility their enemies would retain Pro-Tech’s own personnel to do away with them. Human greed had been programmed out, along with human error.

On the screen that broadcast the picture from inside the bedroom, Nelson watched Lime toss his tuxedo jacket onto the back of a Chippendale chair halfway to the bay windows. He crossed toward the bathroom, passing the fireplace on the way. On the chance that a killer might choose this as a route for entry, an electrified field had been set up along the outer entrance to the chimney. It would stun an intruder senseless while simultaneously setting off an alarm. And on the chance that this and other precautions were rendered void by a power failure, a generator capable of running all systems with no decline in service had been installed in the basement.

Nelson settled back in his chair for what promised to be a very boring night.

He tried to keep his eyes off Lime as the billionaire went about his nighttime rituals in the bathroom, feeling he was invading the man’s privacy. But that was what Pro-Tech was being paid $25,000 a day for, so he made himself watch at least sporadically, his eyes otherwise occupied with the screens that covered the grounds. He paid particular attention to the gardens, which contained the likeliest possible hiding places.

Lime, now clothed in satin pajamas, turned off the bathroom lights and padded softly across the luxurious Oriental carpet. Before climbing into bed, he slid his bay windows open and hit a switch that sent a set of glass curtains, bulletproof as well as electrified, into place before them, so his penchant for fresh air could not lead to his overnight demise. From his bed seconds later, Lime flicked a switch above the headboard which plunged the room into a darkness impenetrable to all but infrared cameras. Nelson watched as Jordan Lime began the slide toward totally protected sleep.

The next hour passed innocently, as Nelson tried not to nod off. The earpiece that relayed sounds from Lime’s bedroom broadcast only snoring. What Nelson really wanted was to be home in his own bed enjoying a similar repose—minus the cameras.

Suddenly Nelson’s earpiece registered the sound of glass breaking. Shocked wide awake, he leaned toward the screens. The pair of cameras sweeping Lime’s bedroom had stopped. In the next instant their screens on the monitoring board filled with garbled interference.

He was about to call up to the guards at Lime’s door when screams filled his right ear. Two tours in Nam, and he had never heard anything like this high-pitched wailing that curdled the blood in his veins. Through the ragged interference, Nelson made out something splashing against one of the camera lenses.

He was out of his chair by then, striking the panic button before him with a trembling hand. A piercing shrill split the quiet of the night, but Nelson’s right ear was still locked on the screaming coming from Lime’s bedroom, screaming that now gave way to rasps and gurgling, along with the harsh sound of something being torn. All this came through his transistorized earpiece while he hurdled up the stairs, joined by guards converging from all angles. Logic told him whatever was happening in the bedroom was impossible. Lime was safe and alive, and all this was a terrible mistake.

Outside the mansion the helicopter cut unceasing patterns through the night. Its huge halogen floodlights illuminated every crack and crevice to reveal nothing amiss on the grounds. The alarm continued to shriek.

In Nelson’s ear there was only a dripping sound.

He sprinted down the third floor corridor to find guards working futilely at the electronically sealed door.

“Out of the way!” Nelson jammed his access card into its slot without a fumble. The door parted from its seal, and he threw his shoulder against it, the professional in him still issuing the proper orders.

And then he was inside: Jordan Lime’s eyes glared up at him, open and bulging. From the rug. Where his head had been separated from his body.

The dripping sound now came in twisted stereo—electronically in his right ear and live in the left. The dripping was blood. And the blood was everywhere.

Nelson leaned over and retched. Vomit spilled up his throat and drenched the already sodden rug. He mopped the excess from his mouth as his eyes struggled to focus on the scene. The remnants of Jordan Lime’s headless torso lay half on and half off the bed. A severed arm was near the pillow. A leg hung over a chair next to the bed.

Jordan Lime had been torn apart limb from limb.

The door and window seals had not been broken. No penetration alarm had sounded.

Then how?
Nelson wondered, as the floor seemed to waver beneath him.
How?

“IT’S THAT RIGHT JUST
up ahead,” David Kamanski told his driver.

They had been driving for three hours from an airfield carved out of the Vermont forest. Kamanski had directions, but in Vermont it was difficult to tell where one town ended and another began. They’d been doing fine until they got off Route 3 and entered a maze of roads with few markings.

The Ford sedan thumped and stumbled down the narrow dirt road, branches scraping at both sides. An hour before, they had stumbled upon Lindenville quite by accident. They’d stopped at a diner to ask directions, and it turned out to be Miss Lindenville’s, in the very town they sought.

The Ford took a hump badly.

“Easy,” Kamanski instructed, as he tried to decipher the final scribble of instructions. “Okay, this is far enough.”

“Because he doesn’t know you. If he sees you first, he may shoot, and he never misses.” Kamanski tilted over to check himself in the rearview mirror. The part in his hair kept dipping lower and lower as more and more strands disappeared. God, he looked old. His eyes could pass for sixty, and he was barely two-thirds of that. “Hell,” he told his driver, opening the door now, “he might even shoot
me
.”

Kamanski leaned over the backseat to grab his overcoat and headed on down the road.

It ended another hundred yards away. Kamanski thought of his Italian loafers and turned reluctantly onto a foot trail through the woods. Ten minutes in he caught the scent of wood smoke, and not long after, the cabin came into view—a one-story, sturdily built structure whose slight imperfections added to its rustic appeal. Kamanski crossed a bridge over a bubbling stream to reach it. Christ, this was really the middle of nowhere. Not even a power line for the last five miles. A man could die out here and it would be ten years before anyone bothered to come look for him.

He reached the front of the cabin and noticed a jeep parked alongside. Four steps brought him onto the porch. He hesitated slightly, then knocked on the door.

“Hello?” he called when there was no response. He knocked again, then called out louder.

His hand slipped to the knob and turned it. The door squealed open. Cautiously, drinking in breath, Kamanski stepped inside.

And found himself face to face with John Wayne, as big as life, sitting on a horse with the reins in one hand and a shotgun in the other.

The whole trip to Vermont, Kamanski had replayed his first meeting with Jared Kimberlain. The stockade cell was grubby and stank of ancient urine. There was no window.