Read The Duke in Disguise Online

The Duke in Disguise 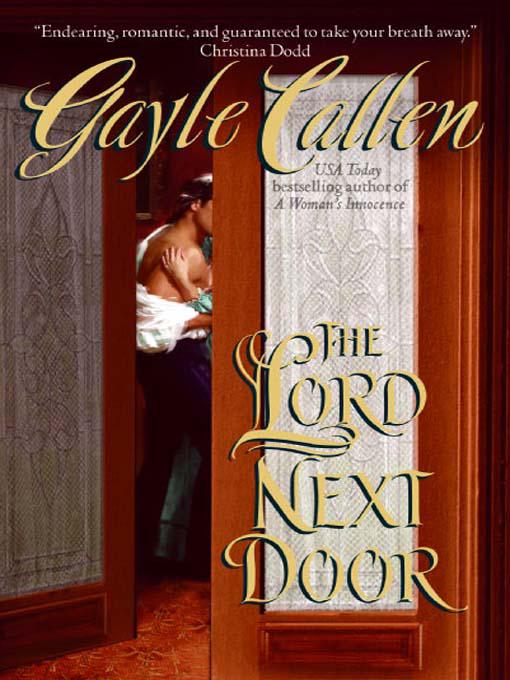 Sisters of Willow Pond 02:
The Duke in Disguise

The Duke in Disguise
Gayle Callen

To my son, Jim,
now off on your own
and exploring the world.
May every goal you pursue
bring you the same happiness
you've brought me.
Contents
Chapter 1
Meriel Shelby stood on the edge of the cliff, the…
Chapter 2
It was difficult to keep Stephen interested in addition and…
Chapter 3
After the governess had gone, Richard O'Neill collapsed into a…
Chapter 4
Richard felt like a fool. Clearly the fears that Cecil…
Chapter 5
As Stephen sat at his elbow, and Miss Shelby sat…
Chapter 6
Richard watched how the shadows highlighted the beautiful curves of…
Chapter 7
Two days later, Meriel used her free time during the…
Chapter 8
Meriel breathed a sigh of relief when Miss Barome stood…
Chapter 9
To stay true to Cecil, Richard made the poor nurse…
Chapter 10
Richard was contemplating another evening alone. He'd turned down a…
Chapter 11
As Meriel walked down the dirt lane lined with hedgerows,…
Chapter 12
Alone in his room, Richard collapsed in a chair and…
Chapter 13
The next day, Meriel took Stephen for a long walk…
Chapter 14
Meriel managed to avoid the Impostor Duke for the three…
Chapter 15
Meriel and Stephen were studying a globe in the library…
Chapter 16
Richard heard the pain in the little boy's voice. He'd…
Chapter 17
After Meriel had gone, Richard dressed quickly, silently, in case…
Chapter 18
Richard could not stop looking at Meriel, bedraggled from the…
Chapter 19
Richard was caught up in a need so profound he'd…
Chapter 20
The next afternoon, Meriel was listening to Stephen's Sunday catechism…
Chapter 21
Meriel couldn't discuss Charles's visit at dinner, and it took…
Chapter 22
Through the night, part of Meriel berated her weakness where…
Chapter 23
Meriel wanted to give Richard and Stephen more time alone,…
Chapter 24
Meriel was so busy for the next several days that…
Chapter 25
Richard fought his every impulse to strangle Charles, to see…
About the Author
Other Books by Gayle Callen
Cover
Copyright
About the Publisher
Chapter 1