Read The Drums of Change Online

The Drums of Change 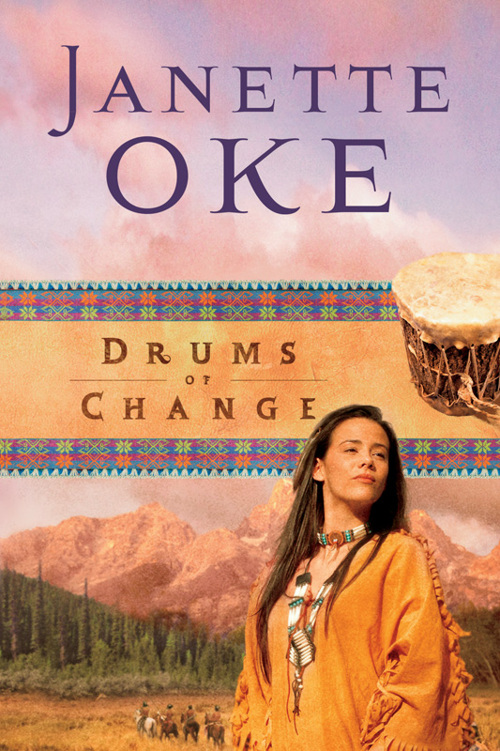 All rights reserved. No part of this publication may be reproduced, stored in a retrieval system, or transmitted in any form or by any means—electronic, mechanical, photocopying, recording, or otherwise—without the prior written permission of the publisher. The only exception is brief quotations in printed reviews.

The Blackfoot group on the cover is from the photo “Into the Wilderness,” by Roland Reed, and was used by permission of the Kramer Gallery and Studio, Minneapolis, Minnesota.

In memory of my mother,

a godly, loving woman
who taught us to respect all people
regardless of race or color,
and to show that respect
through an honest concern
for their well-being.

JANETTE OKE was born in Champion, Alberta, during the depression years, to a Canadian prairie farmer and his wife. She is a graduate of Mountain View Bible College in Didsbury, Alberta, where she met her husband, Edward. They were married in May of 1957, and went on to pastor churches in Indiana as well as Calgary and Edmonton, Canada.

The Okes have three sons and one daughter and are enjoying the addition of grandchildren to the family. Edward and Janette have both been active in their local church, serving in various capacities as Sunday school teachers and board members. They make their home near Calgary, Alberta.

This story has grown out of the early history of our province of Alberta. The history timeline will guide the reader through the actual events. The statistics given, the terms of the treaty, and even the words of the two great chiefs at the time of the signing of Treaty Number Seven have been taken from historical accounts. However, the story itself is totally fictional, and as such I have used some liberty in presenting the characters and their lifestyle.

A number of missionaries came west to work among the tribes and to help establish schools. Accounts tell of their suffering along with the Indian people, sharing what little food they had once the buffalo were gone and medicines in times of epidemics. Their dedication deserves recognition, and I have written this story to help deepen our understanding of all whose lives were touched by that period of history with its dramatic time of great change.

22. Chief Calls Through The Night

Moon Over Trees
—her mother

Calls Through The Night
—a tribal chief

One With The Wind, Laughing Loon
—friends of Running Fawn

The small figure silhouetted against the outcropping of granite stone was not leaning on it but just brushing against it, so she knew it was there. Her gaze took in the full scene before her. A contented sigh escaped into the stillness of the morning and brought a hint of a smile to childish lips. Of all the locations for their camps, this was her favorite. Her most favorite spot in her entire six winters. She loved it. Loved it. She wouldn’t have been able to express it in words, but it was more than love. It was a oneness with the surroundings, a oneness she felt in no other place. Like she belonged to the granite rock at her back, to the giant spruce and pine that covered the hillsides, to the call of the loon on the lake to her left, and to the gurgle of the spring that squeezed its crystal water from the rock crevice just up the slope from her. She sighed again, watching her breath in the frosty air, and lifted her face to let the morning sun brush it with gentle fingers of emerging warmth.

It had been a chilly night. She had buried herself in her furs against the cold and snuggled up closely to the back of her older sister. But she could tell today would be fine. Already the sun was making the steam rise from the cold ground and frigid stream water. Today she soon would stop shivering and perhaps even toss aside her heavy woven shawl. Perhaps … perhaps there would be many warm days before the deep snows wrapped the camp securely in blankets of winter white. She hoped so. She wanted time to become reacquainted with the place she loved. To wander through the woods and wade in the cold stream. To lie on her back in the tall meadow grasses and watch the vees of geese pass overhead on their way back to their southern homes. To pick the few remaining berries from the wild chokecherry bushes and search for the last remnants of summer wild flowers. She dared to hope there would be many nice fall days remaining, even though the limbs of the birch and poplar were already close to being bare, their summer’s green cloaks now spread like rustling gold on the forest paths.

Her eyes took in a nearby poplar whose bare limbs were, for the moment, lavishly decorated with a colorful flock of migrating goldfinches. It was an awesome sight and one that made her heart beat faster. For an instant she imagined joining them and flying off on buoyant wings to wherever they were flying, gaily chattering at one another as they went on their exciting journey—and then she remembered where she was and quickly changed her mind. There was no place in the entire world that she would rather be.

Suddenly she tensed and shifted her body. She lifted her head, tilting it slightly to catch a faint sound that reached her on the gentle wind that played with the loose dark hair against her cheek. She had not, as yet, redone her black braids. She pushed the strands of hair aside with a small, bronze hand so that her full concentration might be given to the sound. Yes. Yes, it was the call of a black bear. Not so much a call as a grunt. Likely a mother, urging her first-year cubs to hurry in their meandering forage for food before they would follow her to the den where she would spend one more winter with them.

She smiled in delight. Wise beyond her years, she knew her people would be very pleased to know that a bear lived close by. Their food supply was assured. If food was scarce in the area, the bear would have moved elsewhere with her growing cubs.

Suddenly she was in a hurry to complete her task and be off. She wanted to tell her family the good news. She would come back to her place for daydreams later. Later when the tasks around the tent home had been completed. Then she would enjoy the pleasures of the warm fall day and dream to her heart’s content.

She reached down to retrieve the skin bucket she had placed on the ground at her feet and moved silently forward. The spring was filled with leaves and twigs of the summer months and would need to be cleared again before water could be scooped from the small pool at its base. She was too small to tackle the job herself, and that would be done quickly by one of the young boys. For now she would need only to dip from the flowing stream.

Lightly she hurried back down the trail, her buckskin garments brushing silently against her bare ankles, her moccasins leaving soft feathery imprints in the brown dust of the path. She must get home with the water before her mother came looking for her. She already had earned the reputation of The Dreaming One, a title that she did not carry with honor, for there were many tasks to be done daily in the camp, and it took all hands to care for the needs of the people. She did not wish to be negligent in her duties—she just forgot to be diligent at times. Mother Nature beckoned and called to her. Pleaded with her to come and feast on the beauties and wonders that were spread before her ever-searching eyes.

She had feasted her soul enough for one day, even though she longed to stay and enjoy the return to her favorite camp.

But her mother would be waiting for the water, and her father would be pleased to hear that a bear shared their mountainside.

Redoubt by Mercedes Lackey
Little Red (Not Quite the Fairy Tale #5) by May Sage
Showdown at Centerpoint by Roger Macbride Allen
World of Aluvia 2 by Amy Bearce
Walk like a Man by Robert J. Wiersema
Powersat (The Grand Tour) by Bova, Ben
Red by Alison Cherry
The Reluctant Marquess by Maggi Andersen
One Stolen Kiss by Boutain, Lauren
Left on St. Truth-Be-Well by Amy Lane