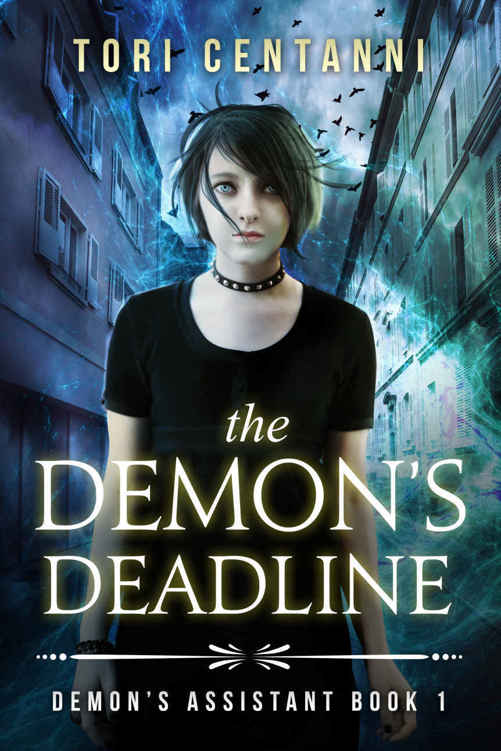 We’ll never share your email and you can unsubscribe at any time.

It’s been a long week, and the last thing I want to deal with tonight is the demon.

I convinced Cam to hold off on throwing a party in his temporarily parent-free house until tomorrow. All I want is to curl up with him in front of mindless television.

I settle onto the sofa with the fluffy afghan, and that’s when I hear the tap on the window. I try to pretend it’s just the rain. Or the echo of popping popcorn that’s coming from the kitchen. But the tap comes again, more deliberately, three times.
Tap, tap, tap.

I know it’s the demon, Azmos, before I look. Sure enough, he’s standing there in Cameron’s backyard. He wears a sleek, tailored, wool coat and sunglasses, even though it’s dark out. He smiles impishly through the glare on the glass. He’s got tan skin and auburn hair that sticks up like he spiked it with gel. No horns, though, at least not that I can see.

Although he’s only a little bit taller than me, he’s imposing, but other than a tiny twinge of fear in the back of my primal brain, he doesn’t really scare me anymore. After six months of working for him, I’ve gotten used to the slightly inhuman way he moves, or rather, the way he doesn’t. He stands stiller than most people, and although he always wears dark sunglasses, I’d bet money he doesn’t blink that often.

I groan loudly, so Azmos will hear. The one time Cam actually agrees to watch a slasher flick marathon on HorrorNet. I open the window and the chilly October air rushes into the warm living room.

“Long time no see,” I say sarcastically. Usually, he shows up once or twice a week, but he came three times last week and this is the fourth time since Sunday. Normally, I don’t mind running his errands, but there’ve been so many of them lately I feel like it’s all I do.

“Good evening, Nicolette,” he says. Azmos pops the screen off the window and bends it toward him, sliding the silver envelope through the crack. His sleeve rides up as he does and I see the briefest hint of gold patches on his skin. They look sort of like scales. He has similar golden dots behind his ears, but otherwise, his exposed skin is smooth and barely blemished. He looks older than Cam and me, but not by much. Early twenties, tops, although he could pass for slightly younger. I have no idea how old he actually is, but I suspect he’s got at least a couple of hundred years on me.

I take the envelope. It’s the size of a large greeting card. The shiny paper is heavy card stock. A name and address are written in fancy calligraphy across the front. I picture Azmos at an old fashioned writing desk, carefully addressing the letters with a quill pen.

“I thought I told you Cam’s house is off limits,” I say with a bravado I don’t entirely feel. Azmos might not terrify me anymore, but he’s holding my life in his hands and I don’t want to get on his bad side.

Cam knows about the demon and my part-time job—he’s the one person I’ve told—but his mom and sister certainly don’t. Luckily, they’re in Portland at a book festival for the weekend, but I don’t know if Azmos knows that, and somehow, I doubt he cares.

“You told me never to darken his doorstep.” Azmos smiles in a way that inexplicably resembles a snake. I can’t see his eyes behind his dark sunglasses, but I’m sure he’s being pedantic on purpose.

“I put a little parmesan on the popcorn—” Cam says, but he stops short when he catches sight of Azmos. He glares at the demon. I give him an apologetic look. He flops down onto the sofa, sending a few stray kernels of corn flying from the quick motion.

“I don’t suppose this can wait ‘til morning.” I wave the envelope.

“You know it can’t.” Azmos pops the window screen back in place.

“Fine,” I say in the same tone I use when my dad talks me into doing the laundry. Azmos turns and walks away, giving me one last wave.

I stare at my reflection in the window and tug at the left side of my dark brown hair. I had it cut short for the start of school and it’s gotten long enough to curl at the tips, which would be awesome except that it curls toward my neck on the right side and away from my neck on the left. The bangs are long and I’ve swept them to one side, afraid to trim them myself. The last time I did that, it didn’t end well.

I sit down next to Cam and look at the address. The lack of unit number means it’s probably a house, which is good. Houses tend to be easier. But it’s all the way out in Bellevue, across Lake Washington, and it’s already after nine. If a bus is running out there, it’s an every-hour deal and it will take me all night. Besides, no way this residence is close to a bus line. And a cab would cost more money than I have.

“Should have had a party,” Cam grumbles.

“Sorry.” I know he’s disappointed, but so am I.

“Not your fault. It’s just how it is.” He grabs a fistful of popcorn and loudly eats it.

“I know.” I wish it was different. I don’t mind running errands for the demon, but he always shows up at the worst possible times.

“You should probably get going.” Cam stares fixedly at the screen.
Deadly Prom
(the sequel to
Deadly Homecoming
) is playing. An actress with a bad perm in a 1980s-style prom dress runs around screaming through deserted school halls, pursued by a shadow. I’ve seen this one at least twice. She dies in the gym bathroom, which is her own fault, since she passes at least three visible exits and never tries to leave the school.

Cam doesn’t look at me, but after a long moment, he says, “Fine. Not like I have anything better to do.”

I ignore the frustration he’s not bothering to hide. I can’t even blame him. It
is
irritating. I want to put on pajamas and veg, too. But it’s not my fault and he knows it. Duty calls.

In the hallway, I put on my combat boots and tug on my purple and black raincoat. Cam ties on his sneakers and pulls his blue cotton sweatshirt over his head.

Cam’s Toyota Camry isn’t anything special, but it’s a car, and it was made in this decade and it’s more than I have. It was his sixteenth birthday present and he loves it like a baby. He had a new stereo installed that’s pretty crisp, but I hate music in cars, so it doesn’t do me much good. The second he starts it up, Pigs in the Toaster, this emo band he loves for reasons I cannot fathom, blasts out of the speakers at a volume that should be illegal for whining set to guitar. The singer’s voice is screechy and the music is too disjointed to have a real beat. He doesn’t move to turn it down.

Normally, I’d turn it down myself and he’d give me that sheepish smile of his and apologize, but there’s a tension in the car and I don’t want to make things worse. Once we pull onto the freeway, he starts tapping his fingers on the wheel and then looks over at me. That’s when he kills the music.

“I’m not mad at you. I’m mad
for
you.” Cam gives me a small smile and I relax. He has a charming, boy-next-door smile, one that says everything’s going to be okay. The first time I saw him, I thought he looked like a blond Clark Kent with his strong, square jaw and emerald eyes behind his wire-framed glasses. He’s gorgeous, even when he’s annoyed. “This is getting ridiculous.”

“This is what, the third time this week?”

“After you had to miss your algebra test, it’s getting unrealistic.”

“I’m a demon’s delivery girl, Cam. It doesn’t get much more unrealistic.”

Missing the algebra test was actually the least intrusive errand this week, as far as I’m concerned. I’ll be lucky to get a C in that class, anyhow. Postponing the test with a fake note for lady problems might even help if I actually spend some time studying. But he has a point. It’s getting a lot harder to keep up with this “job” and juggle it with the rest of my life.

“What can I do? It’s not like a real job with regulations and laws about not interfering with school and stuff.”

Cam runs a hand through his hair. “Maybe we should sit him down and talk to him. He deals with contracts and stuff. He’s clearly organized. Surely, he can understand—”

A car cuts us off and Cam swears, grabbing the wheel. It’s not a real close call, but my heart stops and then restarts, doing its best hummingbird impression. Sweat beads on my upper lip. I gasp for breath and feel like I’ve been kicked in the chest.

I nod, but I can’t even breathe enough to talk.

There are no flashbacks like in the movies. No slow-motion replay of the accident that killed my mom, nothing like that. The memory is visceral. It’s muscle memory. And for a split second, my muscles were all pretty sure that I was about to die. Now, I need to recover.

Cam keeps looking over at me, but that only makes me more nervous. I nod desperately at the road.

“Right,” he says, and then he fixes his gaze firmly in front of us.

By the time we reach the address on the envelope, my heartbeat has returned to normal and I’ve stopped shaking.

The house is yellow with white trim. It’s a two-story place with a nice front yard squeezed between two condo developments. It reminds me of a farmhouse. The porch light is off, but there are lights in the upstairs windows and the blue-blinking light of a television downstairs.

“Want me to go with you?” Cam asks. I shake my head and unbuckle my seat belt.

I’ve lost count of how many letters I’ve delivered for Azmos. Cam was keeping track in a notebook for a while, but it was thrown out by accident during a post-semester locker clean-out last June. Usually, it’s a standard operation. I hand the letter over, get a funny look or even a frightened expression, and the door is slammed in my face. Sometimes, I hear a sob or a shout that curdles the contents of my stomach and freezes my blood. But the haunted, resigned looks are by far the worst.