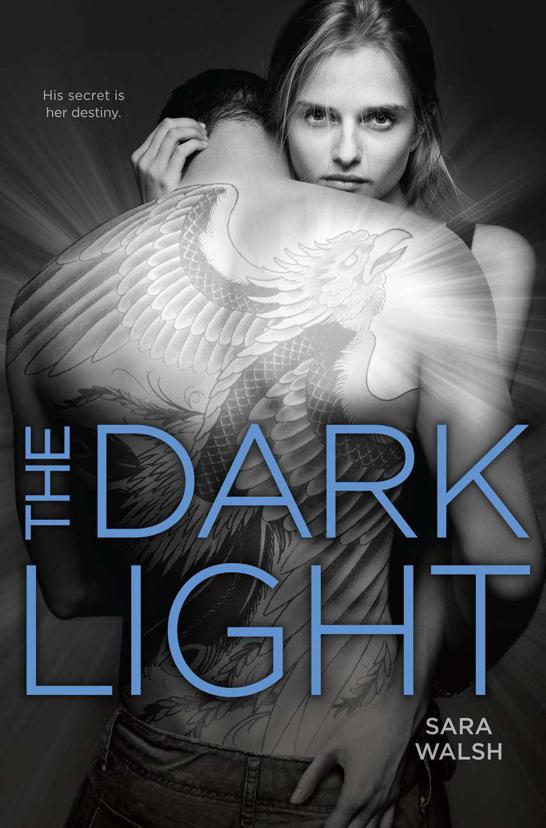 Thank you for downloading this eBook.

or visit us online to sign up at
eBookNews.SimonandSchuster.com/teen

T
here have been strange lights in Crownsville for as long as I’ve lived here. Lights on the Ridge; lights on the river; lights that seep from the ground and then float to the sky in clouds of colored mist. No one really talked about them. No one really cared.

The patrol cars parked on the corner of Birch and Main were the first thing I noticed when I left work that night. After what had happened in the neighboring town of Onaly that morning, I wasn’t surprised. But seeing the cops in Crownsville still gave me the creeps.

The second thing I noticed was Rusty, my car, parked with his headlights glaring. I groaned.

I tried to remember even switching them on, but came up blank. That pretty much summed up my day. It was nine o’clock, which meant Rusty’s crappy battery had been draining for three solid hours while I’d waited tables at Mickey’s. Having only just liberated him from Reggie West’s Motor Repair and Salvage—Rusty’s second home—a dead battery was the last thing I needed. Now I would probably be stuck here while Jay waited for me at the Bakers’. Pete, as usual, was nowhere to be found.

I heard the door to Mickey’s open and close behind me. As I rummaged through my bag for my keys, Greg, the night manager, stepped onto the sidewalk.

“You left Rusty’s lights on,” he said, stating the obvious.

“Yeah.” I continued digging. Some of the stuff had been in my bag for months: spare socks; a million tissues (mostly used); a cigarette lighter, though I didn’t even smoke. I swore to clear the purse out as soon as I got home. I mean, how much crap does a seventeen-year-old really need to carry around?

“And you forgot this,” said Greg, passing me my jacket.

“Thanks, Greg.” I took it from him with one hand as I pulled out my keys with the other.

“Something on your mind, Mia? You’ve been twitchy all evening.”

I glanced at the cops, parked on the side of the road. “It’s the Onaly thing,” I said. “Have you heard of anything like this happening before?”

“In these parts? Can’t say I have. But someone’s taking those kids.” He shook his head. “Five gone in six months and all within fifty miles of here.”

The media called them the
Crownsville Kidnappings
, but only one of the boys who’d vanished, seven-year-old Simon Wilkins, had actually lived in town. Crownsville was a hub for the small towns and farms that surrounded it. This was the reason there were more than fifteen hundred students enrolled at school. Occasionally, kids went missing, but everyone knew where they were—Omaha, Kansas City, Sioux Falls. They bailed when they’d had their fill of rural Nebraska. But this wasn’t the same thing. The boy who’d vanished from Onaly Crossing this morning was ten years old, the same age as my half brother, Jay, so don’t tell me he’d gone looking for a new life in the city.

“I’ve got jumper cables in the truck if you need them,” said Greg.

Which I invariably would. I had no one to blame but myself.

He walked me to the car. I slipped into the driver’s seat,
patted Rusty’s dash—a sacred ritual—and turned the key. The engine wheezed, then roared. It was the best news I’d had all day.

Dark had fallen thick and fast. By the time I turned off Main Street, I’d switched on my high beams. It was a couple of miles to the Bakers’ on rural roads that had seen better days. Having once mangled a rim in a pothole down here, I kept to the speed limit.

I’d gone about a mile when my phone burst into “The Star-Spangled Banner.” That meant one thing—my best friend, Miss Willie Burkett. I pulled over to take the call.

“How was work?” she asked. Willie never wasted time with “hello.”

“Usual crowd,” I replied. “I swear the place is some kind of alternate dimension.”

She laughed. “Have you spoken to Pete about this weekend at the lake?”

I cringed. “Haven’t seen him yet,” I said. In truth, I had no idea where he was. “Wills, I promise I’ll talk to him. Just don’t expect miracles.”

“You
have
to be there, Mia. Andy is definitely coming. This is a chance for you guys to finally get together.”

I wasn’t so sure. Andy Monaghan was a drop-dead gorgeous
senior who drove a black Corvette that came straight from the showroom of his father’s dealership. We’d come pretty close to dating a couple of times, but each time something had gotten in the way: Andy’s broken leg, his ex-girlfriend moving back into town, me and Seamus McEvoy—a month-long fling I’d rather forget. But now Andy had broken up with his girlfriend, and Willie said he’d been asking about me around school. . . .

“I’ll ask Pete as soon as I see him,” I said. I picked imaginary lint off my jeans. “But I’m warning you, Wills; he hasn’t been around much lately, and I can’t leave Jay with this psycho loose on the streets.”

“Pete needs to sort his sorry ass out,” Willie muttered.

True, but I didn’t see that happening any time soon.

I slumped in my seat and turned my head to the window. The lights on Rowe Boulevard were faint in the distance. Across the open fields, the trees that bordered the elementary school were silhouetted against the night sky. I watched their outlines swaying in the breeze, resigned to the fact that I was always the one who had to back out of our plans.

I realized Willie was still talking.

“Don’t you dare,” I said, catching the tail end of her threat. A genuine threat. Willie’s dad was Crownsville’s sheriff.

“I guess.” She sighed. “Come over and we can figure something out.”

Silence followed and I knew we’d strayed into difficult territory. Somewhere along the line, Willie had decided that I had the world’s most horrendous life. You couldn’t blame her; my dad had abandoned me at birth and my mom was in prison. I’d lived with my grandmother in Des Moines until I was eight. When she died, I was shipped here, to Crownsville, Nebraska, to live with Uncle Pete, my mother’s brother. Pete wasn’t the most attentive guardian, but things weren’t that bad. I pretty much did what I wanted. But it also meant that Jay, who’d lived with us for the past six years, had no one to worry about him but me. I wasn’t afraid to step up to the plate and take care of Jay. I was an honors student, had a 4.3 GPA, played volleyball and soccer, and still waitressed three shifts a week. I was doing fine.

Resigned to Willie’s lecture, I stared out of the window.

And then the light caught my eye.

At first, I dismissed it, thought maybe it was the beam from a flashlight. I was parked on Route 6, and the light was far out, somewhere on the open land between me and Rowe. It was hazy in the faint glow of Rowe’s streetlights, but definitely there.

I rolled down the window for a closer look, squinting through the darkness. The beam had widened, and I was sure I saw pastel shades in the light.

“Yeah,” I said, though, of course, I wasn’t. Whatever was out there had my full attention. It was like a reflection in one of those crazy mirrors at the State Fair—you expect to see reality, but what you get is indistinct and unreal. “Willie, I’ll call you back.”

“Course not.” I watched, mesmerized. “I’ll call you back.”

Hanging up the phone, I stepped out of the car. The light danced in the breeze, the colors deepening. Red and blue and gold, the shades were vibrant against the surrounding silvery mist.

As I tried to rationalize what I was seeing, maybe fireworks or marsh gas, my peripheral vision caught a shadow low to the ground. A
moving
shadow, close to the light. It drifted to the left and, suddenly free of the light’s glare, took form. It was a figure, hooded and cloaked, though I knew it must be a trick of the eye; there had been nothing but the light a second ago. Alone on a deserted road, with who knew what out there in the fields, I backed up to Rusty.

The moon broke free of the drifting clouds.

And then they were gone.

The light. The shape. They both vanished.

Mildly spooked, I climbed back into the car. Whatever had been out there wasn’t there now. It was just the same old fields. The same old lights on Rowe. Still, I locked the door behind me.

By the time I reached the Bakers’ to pick up Jay, I’d banished the incident into the “crazy story to tell Willie” category. Mrs. Baker answered the door with the widest smile I’d seen in days. She always made me feel welcome. Shrieks and screams came from somewhere inside the house.

“They’re slaughtering orcs in the living room,” she said. “Come on through.”

I headed in to find Jay and his best friend, Stacey Ann, sprawled on the rug, Wii control pads clutched in their hands. Both turned when I entered, Stacey staring through those horrific glasses that magnified her eyes to twice their natural size, Jay brushing his wild mop of curly hair from his face. Picture any painting of a cherub. That’s Jay Stone. Right down to the chubby baby cheeks and wide puppy-dog eyes. It’s clear we only shared a father; my hair was chocolate brown, Jay’s was more creamy caramel.

I got a chirpy “Hi, Mia,” from Stacey Ann and a long groan from Jay.

The Heretic Land by Tim Lebbon
Amply Rewarded by Destiny Moon
Space Wars! by Max Chase
Wolf Unbound: Aspen Valley Wolf Pack by Amber Ella Monroe
House of Cards by Pinson, K.
Entreat Me by Grace Draven
Is It Just Me? by Chrissie Swan
The Encyclopedia of Dead Rock Stars by Jeremy Simmonds
Viking by Daniel Hardman
The People in the Castle: Selected Strange Stories by Joan Aiken