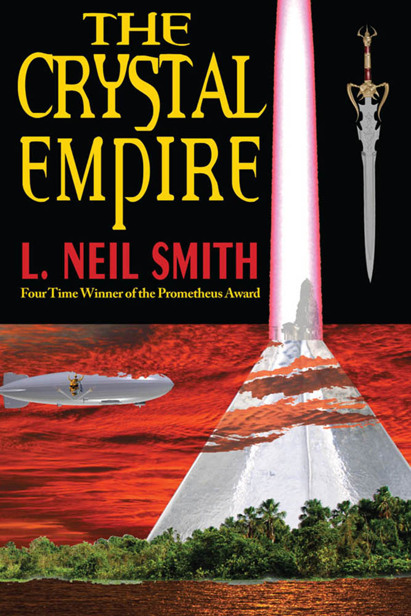 An Imprint of Arc Manor

The Crystal Empire
copyright © 1986, 2010 L. Neil Smith.
All rights reserved. This book may not be copied or reproduced, in whole or in part, by any means, electronic, mechanical or otherwise without wri
t
ten permission from the publisher except by a reviewer who may quote brief passages in a review. Cover copyright © 2009 Arc Manor, LLC
.
Manufactured in the United States of America.

This book is presented as is, without any warranties (implied or otherwise) as to the accuracy of the production, text or translation.

an imprint of Arc Manor

The phrase in Chapter XXIII, “The Sword of God”, is
used
with the consent of my friend, colleague, and
so-far-unindicted co-conspirator, J. Neil Schu
l
man.

FOR PHILIP B. SULLIVAN,

II: Mistress of the Sisterhood

XV: By Arrangement of the Caliph

XVI: A Party of Every Section

XVIII: The Pillar of Fire

XIX: The Ship of the Desert

XX: The Botherhood of Man

XXIII: The Sword of God

XXVII: Smoke Upon the Wind

XXVIII: Factions of the Ancients

XXXII: The Breath of God

XXXV: Audience with the Sun

XXXVI: Ship of the Cloud-Tops

XXXIX: The Enlightenment of Oln Woeck

XL: In the Palace of the Sun

XLII: The Tree of Might-Be

XLVI: The Bride of God

“And he that owneth the house shall come and tell the priest, saying, it seemeth to me there is as it were a plague in the house. Then the priest shall command that they empty the house...that all that is in the house be not made unclean....And he shall cause the house to be scraped within round about, and they shall pour out the dust...into an unclean place.”
—Leviticus 14:35-41

They obliged the carpenters to watch.

Gathering his robe against the January cold, Wilhelm of Glarus was likewise an unwilling witness, the prisoner of his own eyes. They r
e
fused to tear themselves from the fine new house—a remarkable, wi
n
dowless stru
c
ture of two stories’ height—standing, daubed with pitch instead of plaster and unpainted, upon a rocky islet where the Rhine bent itself toward the faraway ocean. Neither were the scraps and shavery of its making cleared away, instead being swept beneath its open found
a
tion, augmented with many a wicker basket of forest-gathered kindling.

Snowflakes, impelled by savage, pine-laden gusts, stung exposed flesh. Wilhelm’s rough-woven garment afforded scant protection. Yet the marktplatz above the river overran with a multitude little better clothed, under no such compulsion as the house-carpenters suffered—save, pe
r
haps, of the variety that tormented Wilhelm.

Before the Rathaus, which dominated the wind-drifted square, city fathers, arrayed in heavy furs and ornate necklaces, nodded. A ring-mailed officer shouted; armsmen lowered long-shafted pikes, shepher
d
ing a clot of shivering, bedraggled forms—not members of the waiting throng—toward the century-old stone bridge. The bridge was the city’s proudest achiev
e
ment, the first in history to span the Rhine.

The community of Basle’s unbelievers would this day make pen
i
tence for the Great Mortality.

Even as a third part of the town’s inhabitants—indeed, a third of all Christendom—were being thrown into shallow common trenches, war
n
ing had arrived from Savoy, in the form of confessions extracted by to
r
ture. Messengers from Toledo, the tale was told, bore poison in little leather packets for sprinkling in the wells and springs of Europe. In the Rathaus, a decree was passed forbidding Jews to settle in the town for two hundred years. The problem, it was understood, was what to do with those hu
n
dreds whose fathers had been born here, who possessed shops, tools, property—and a wealth of gold and silver.

Wilhelm shuddered. He was a small man, of fragile build, with aw
k
ward hands and feet, a narrow, bony chest. His pale blue eyes, watering in the cold, were set too close beside the prominence of his nose. Yet there was kindness in them, wisdom beyond his twenty-three years. A
l
most he regretted his tonsure, which hadn’t been required of him abs
o
lutely. His head ached where the freezing wind rasped across his shaven scalp.

In Avignon, Pope Clement VI, in the sternest of promulgations, had forbidden, upon pain of excommunication, measures like the one this moment transpiring before the young priest’s horrified eyes. Still, Cle
m
ent was just one Pope of two, and Avignon further away than the ocean.

The march across the ancient span began.

It was difficult to stand against the merciless wind, which roared u
n
impeded along the water, without leaning into it. The cold was terrible, the armsmen ungentle. Yet only the children cried as pike-points pricked them, as frozen stone cut unshod feet. Their mothers made to quiet them, but it was effort wasted.

Reaching a point where rough siege ladders slanted against the foo
t
ings, they were compelled to climb in their hundreds onto the barren surface of the island. Several lost their grip upon the crude-lashed poles, falling to the cruel rock. The armsmen forced the living to drag the sha
t
tered dead until they came to the house, into which, by pairs and dozens, many were a
l
ready crowded. When it was full, and none save armsmen and a single ca
r
penter stood visible upon the rock, that unlucky artisan raised his hammer and let it fall, again and again, nailing the one door shut.

Some armsmen had brought torches, wind-whipped and showering sparks against the pitch-daubed windowless walls. These they thrust b
e
neath the foundation, amidst the scraps and kindling. The house caught, flame lashing out and upward. Even across this distance, and the river, Wilhelm could feel the heat of it upon his face.

More than the wind was moaning now. He could hear the victims calling upon their god. Their prayers sounded distressingly like his own (and were received with the same divine indifference). Noise—the shrilling sound of hundreds of trapped men, frightened women, helpless children, screaming out their last breath as muscles shriveled, twisted, hair singed into glowing beads upon their scalps, burning its way to the bone, their very eyes bursting in the furnace—

Rough hands shook his shoulders. Drenched with foul-smelling sweat and a fatigue untouched by stolen sleep, Wilhelm sat up on a na
r
row pa
l
let, propping his elbows beneath him. He blinked—standing over him was an armsman, like the ones who had...but that had been a year ago, he re
a
lized with returning consciousness. He’d been suffering again through one of his recurring nightmares.

This wasn’t his familiar cell, but a broad, high-ceilinged chamber which in the daytime would fill with light from arch-topped many-colored windows. At present they tossed back scattered shards of ca
n
dlelight, absorbed by the amorphous writhing forms which covered the flagging of the mi
n
ster nave. The place reeked of burnt tallow, fevered bodies, incense, and death. To think how he’d complained within hi
m
self when it had merely smelled of mildew!

Weight settled upon his chest. These lumps were people, his paris
h
ioners, now Father Albert was gone. Sounds of doomed souls suffering and dying filled his every waking hour, as well as every moment of his sleep. Yet there was naught he could do for the still-living whose plague-racked b
o
dies surrounded him, crowding the ancient church. He had tried. Having fallen at last into a guilty and exhausted sleep, during frantic attempts to comfort victims of this freshened onslaught of the Mortality, he admitted to himself that his limited strength would have been best spent attempting to dispose of the mounting dead.

Waking the Bear (Shifter Wars) by Kerry Adrienne
Lost Until You (The Sorrentino Brothers Series Book 1) by Grant, J.R.
The Prodigal Comes Home by Kathryn Springer
Mail Order Mayhem by Kirsten Osbourne
The Kama Sutra of Vatsayayana by Richard Burton
Wild in the Field by Jennifer Greene
Seiobo There Below by László Krasznahorkai
Deadly Little Lessons by Laurie Faria Stolarz
Triumph by Jack Ludlow
A Time to Die by Mark Wandrey