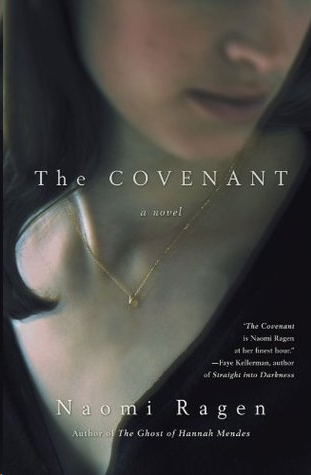 This is a work of fiction. Any resemblance to actual persons or events is purely coincidental.

THE COVENANT
. Copyright © 2004 by Naomi Ragen. All rights reserved. Printed in the United States of America. No part of this book may be used or reproduced in any manner whatsoever without written permission except in the case of brief quotations embodied in critical articles or reviews. For information, address St. Martin’s Press, 175 Fifth Avenue, New York, N.Y 10010.

Grateful acknowledgment is made for permission to reprint the following:
Excerpt from
The Consolation of Philosophy
by Boethius, translated with an introduction by V. E. Watts (Penguin, 1969). Copyright © 1969 by V. E. Watts. Reproduced by permission of Penguin Books, Ltd.

For all victims of terror, and those who loved them.
May God comfort all mourners and wipe the tears from all faces.

When I first conceived of this book, what concerned me most was conveying with accuracy the lives of women who had survived the Nazi concentration camps. It was a daunting responsibility for someone born in America after the war. I tried my very best. I would like to thank all those who helped me to conceive the inconceivable.

First and foremost, I thank my dear mother-in-law, Shirley Ragen, who spent three of her teenage years with her two sisters as prisoners of Auschwitz. Her descriptions, so painfully and vividly recalled, shared over many years, formed the basis for my understanding. I would like to thank Sara Pecanic, and the other dedicated librarians at Yad Vashem in Jerusalem, for helping me to find dozens of rare memoirs written by survivors. I thank the many authors for their courage, honesty and skill. I thank Lisa A. Goodgame, coordinator, onsite and scholarly access, of the Survivors of the Shoah Visual History Foundation, for facilitating my access to remarkable taped interviews of women survivors of Auschwitz. And I thank Mr. Steven Spielberg, whose vision and generosity created the foundation, and makes its archives an invaluable resource for writers and scholars.

I would like to thank Ruthie Gillis, wife of the late Dr. Shmuel Gillis, for agreeing to share her story with me. Dr. Gillis, a beloved and respected senior physician in the Hematology Department in Hadassah Ein Karem, was killed by terrorist snipers on the Jerusalem-Hebron highway on February 1, 2001. My meeting Mrs. Gillis, mother of five and a woman of exceptional faith and love, will never be forgotten.

The story of Dov Kalmanovitch, the first victim of the Intifada, is true. I thank him for sharing it with me.

I thank Yehuda and Esther Waxsman for many years of friendship and inspiration. It was the heartbreaking kidnap and murder of their nineteen-year-old son Nachshon—an off-duty IDF soldier—by terrorists in October 1994 that triggered the creative process which resulted in the birth of this book.

For the information on the world of Islamic terrorism, I relied on many books and personal interviews. I particularly thank retired Israeli Secret Service Agent X, who cleared up many questions I had and helped me to make this book as close to reality as possible.

I thank Asher Ragen for his many valuable insights. I thank Dr. Michael Widlanski, lecturer at Hebrew University’s Rothberg School, for sharing his extensive expertise in Arabic language and culture. I thank Rachel Atlan for sharing her knowledge of Paris and the French language.

Little did I know when I began writing about a terrorist incident that I would not have to rely solely on research; that my family and I were fated to be present at one of the worst terrorist incidents in Israel’s modern history: the Passover Massacre in the Park Hotel in Netanya in 2002 in which twenty-nine people were murdered by a suicide bomber, and hundreds injured.

I thank Jennifer Weis, my talented editor at St. Martin’s Press, and my agent, Lisa Bankoff, of ICM, for believing in this book, and supporting me through the terrible year in which I struggled to recover from the reality of a terrorist attack in order to write a book about a terrorist attack.

As always, my heartfelt thanks to my husband, Alex, for thirty-three years of loving friendship, pioneering a new home in an ancient homeland.

I
T WAS THE
sound of the birds in the morning he loved most, Dr. Jonathan Margulies thought as he lay in the cool early morning darkness. So different from the sounds of his own childhood in Detroit, where hearing a bird sing amidst the traffic, the trucks rolling down the superhighways, could not happen. He closed his eyes, listening to the sweet noises. They were gold-crests, or sylvia warblers, he thought, having once looked them up in a book.