Read The Cost of Living Online

The Cost of Living 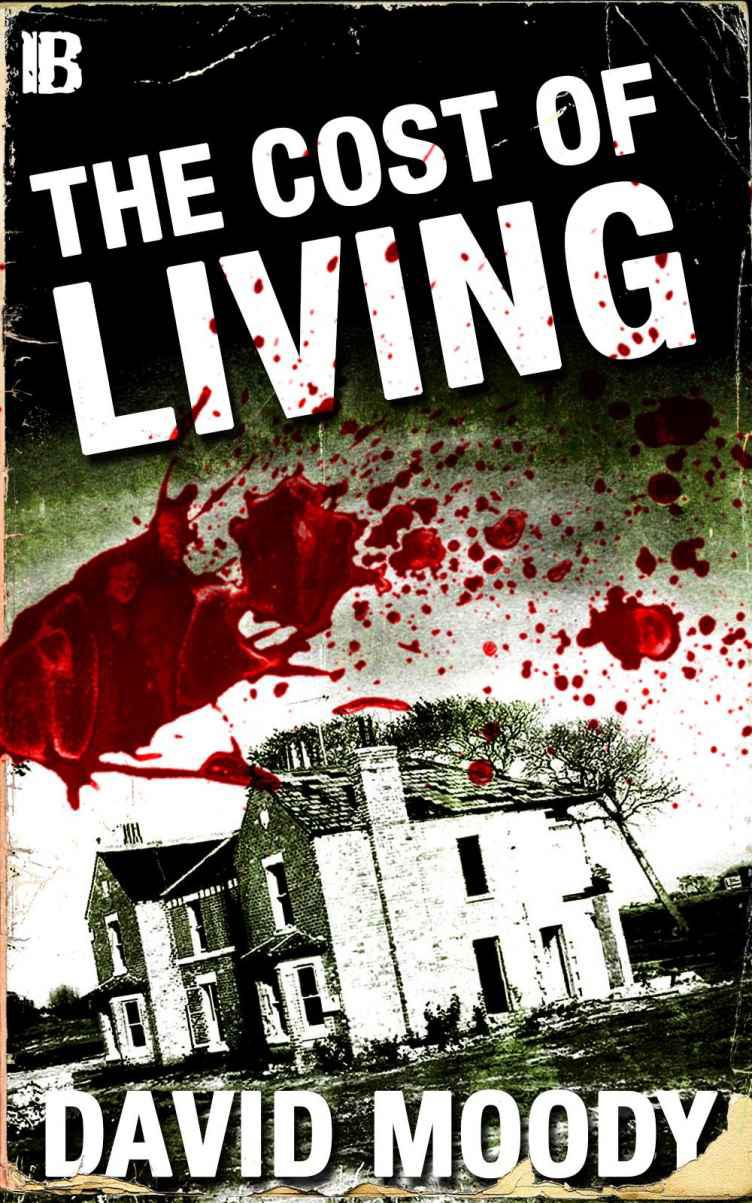 THE COST OF LIVING

The right of David Moody
to be identified as the author

of this work has been
asserted by him in accordance with

the Copyright, Designs
and Patents Act 1988.

This is a work of
fiction. All of the characters,

organisations and events
portrayed in this novel are

either products of the
author’s imagination

or are used
fictitiously.

First published in 2014
by Infected Books

THE
COST OF LIVING

Sometimes when
you’re writing, a germ of an idea will embed itself into your brain, and the
only way to rid yourself of it is to write it out of your system. In my
experience, that usually does the trick. Occasionally, though, it might not go
to plan. For any number of reasons, the story you end up with might not say
what you wanted it to say, or you might go off in a different direction, and before
you know it, you’re back to square one.

That
was what happened with THE COST OF LIVING. The initial idea came to me many
years ago while I was writing the early
AUTUMN
books. I tried to develop the story as
an AUTUMN short but, because of the technicalities of my invented infections
and the ‘rules’ of the AUTUMN world, it didn’t work. So I put the idea to one
side and planned to come back to it later.

Which
I did. Post-
HATER
, I tried writing the story again, and
the result was a four thousand word short named PRIORITIES (which you can find
it at the end of this book). It was okay, but it wasn’t quite right...

Sometime
later still, when I was asked to write a piece of seven-hundred and fifty word
flash fiction, I again returned to this same idea, wondering if I could say
more with less. Though the piece (which you can also find at the end of this
edition) was well received, I still wasn’t satisfied. Though it packed a decent
punch, the characters didn’t have sufficient space to develop.

Looking
back, I decided that the length restrictions I’d imposed on the different
versions of the story were the problem, and I decided to start again. This time
I was just going to write without worrying about word counts or formats, until
I was satisfied I’d told the story properly.

And
I think I’ve finally done it.

I
hope you enjoy THE COST OF LIVING.

THE COST OF LIVING

And I’m just
looking at him thinking,
did you really just say that?
‘It’s a pair of
bloody supermarket leggings, Stu, that’s all.’

‘No,
it’s three pairs of supermarket leggings. Do you really need three pairs?’

‘Yes,
I really need three pairs. They’re comfortable. I’ve been living in leggings
since the baby and mine are all worn out.’

‘I
get that, but three pairs? You know how tight money’s been since we moved. I’m
just thinking that—’

‘I
know exactly how tight money’s been. It’s all you ever talk about. The cost of
living this, the cost of living that... you’re like a broken bloody record.’

‘Not
in front of Sally, love.’

‘You
bought yourself a load of work shirts last weekend.’

Sometimes
I just give up. He means well, but Christ, he does my head in. I don’t give him
any chance to answer, I just shove three pairs of leggings into the trolley and
push it away. Give him thirty seconds and he’ll have caught up and he’ll be
grovelling. I know how his mind works.

‘I’m
sorry, Gab,’ he says, alongside me again now, arms full of baby. ‘It’s just I’m
under a lot of pressure at work and I’m worried about money and—’

‘And
I know. You make it sound like I’m extravagant and I’m not. I don’t want three
pairs of leggings, I
need
them. Believe me, I’d rather not be shopping
for clothes in the supermarket.’

‘I
know. Look, things’ll settle down in a few more months. Once the Harvest
project’s done and dusted and the O’Rourke contract’s finalised I’ll get a
decent pay-out. First thing we’ll do is go into town and have a spend-up. We’ll
get Hannah and Sally kitted out, get Nathan the trainers he’s on about...’

A
drunk-looking woman comes through the automatic doors, straight across the
front of the trolley, not looking where she’s going. I almost hit her. ‘Don’t
mind me,’ I shout. She just ignores me, heading straight for the booze.

He
looks at his watch as if it’s going to tell him. ‘Half-twelve.’

Shopping
with Stu is a pain in the backside. Everything takes twice as long as it
should. I do the food shop every week, but it’s like a bloody adventure for
him. I go straight for the stuff I always buy, but he’s always looking for
alternatives, trying to find a cheaper option. He’s at it already with the
bloody potatoes. ‘But you can get two packs for three pound fifty. We’ll save
seventy pence if we buy two.’

‘But
we won’t use two, will we? We won’t get through both packs before they go out
of date. You’re not saving seventy pence, you’re wasting twice that. Don’t you
get it?’

He’s
not convinced. I’m thinking he’s about to start trying to tell me how I should
cook more potatoes to make things cost-effective when Hannah starts grumbling
for her bottle and Sally pulls me over towards the sweets. I’m glad of the
distraction. ‘Can I have some chocolate, Mummy?’ Sally asks, and I can feel
Stuart on my shoulder, ready to launch into another tirade, but I’m not having
it.

‘Of
course you can, love. What would you like?’

I
glance back and see him struggling with the baby, and the chocolate’s chosen
and in the trolley before he can protest. I push on to the next aisle before he
can start.

I
can hear something.

You
don’t realise the normal soundtrack you hear in places like this until it’s
disturbed. The kids, the trolleys, the conversations, the music... they’ve all
just been silenced. There’s a weird, uncomfortable quiet now. Stu’s noticed it
too. We just look at each other and he shrugs.

Around
the corner and into the next aisle and we see it. That drunk woman is kicking
off. I try to distract Sally but it’s too late and she’s seen her. ‘What’s
wrong with that lady, Mummy?’

I
look at Stu again, both of us instinctively keeping it light and airy so Sal
doesn’t get scared. This isn’t good. I can still hear noise elsewhere in the
store, but it’s all dwindling down to nothing as more and more people become
aware of what’s happening. The woman’s having some kind of convulsion it looks
like, a full-blown fit. A couple of staff are trying to get to her but they’re
struggling to get through the onlookers and their massed trolleys and baskets.
There’s a PA announcement for the duty first aider.

‘They
don’t need a duty first aider,’ Stu says. ‘They just need to hang her out to
dry somewhere.’

There’s
a security man, a young girl and a slightly older guy around the woman now,
trying to hold back the crowds. They’re doing what they can, but they’re just
part-time folks here to stack shelves and stocktake, and I can see them all
desperately looking for the first aider so they can pass the buck. To be fair,
I’d be the same on their wages. Another woman in a supermarket uniform brushes
past us and I see the young girl look up and make eye contact with her,
immediately jumping to her feet and calling her over.

Believe
me, I’m not one of those people who stands and stares at accidents. I make a
conscious effort not to look when we see crashes on the motorway and get slowed
down by all the other foul rubber-neckers. But the thing is, we can’t move
here. There are shoppers in front and behind now and we’re trapped. The
security man is trying to move people back to give the woman on the floor some
space but it’s not easy. He has to shout over the heads of the people at the
front so that those near the back can move first, but there are still more
people crowding into this aisle than there are going the other way. I doubt
half of them even know what’s happening. All the half-full trolleys make it
virtually impossible to move, bunched up tight together. I pick Sally up and
put her in my trolley with the shopping to get her out of the way. She
protests, but a piece of chocolate shuts her up fast.

I
can see the woman on the floor now through a gap that opens up in the crowd.
Bloody hell, that’s horrible. She’s just lying there, facedown on the marble,
mouth hanging wide open, eyes staring into space. I don’t think she’s
conscious. Is she dead?

This
is just like the reports we’ve seen on TV.

‘We
need to go,’ Stu says, thinking the exact same thing. ‘I reckon she’s got it.’

He
starts trying to move back, holding onto Hannah with one hand, pulling at my
arm with the other. But there’s no way out, not until a few more of these
bloody idiots shift. Hard as we push back, they’re still pushing forward.

Now
the security guy’s getting shirty, but he can’t see we’re stuck here. Someone
has a go at him and I’m thinking this is going to get nasty if we’re not
careful. I just want to finish the shopping then get out of here and go pick up
Nathan from football. I knew I should have done this yesterday. Bloody Stuart.
If he hadn’t insisted on coming with me today then we—

A
second ago I thought that woman was dead. Now she’s moving again.

‘See
that?’ Stu says, grabbing my arm even harder.

‘But
nothing. I swear, she’s got it. They collapse, then they get up again.’

There’s
a collective scream. Loads of people try to run when the woman moves suddenly.
She rolls over onto her back, quick as you like, then starts clawing at the
floor with her fingers like she’s trying to get a grip. The first aider’s here,
but even she’s keeping her distance.

The
woman who’d collapsed has attacked the young girl in the supermarket uniform.
She’s got her pressed up against the shelves now and there are tins and packets
of food flying everywhere as the girl tries to fight her off, but the woman’s
all over her. Bloody hell, even the security guard can’t drag her away. She’s
got her arms and legs wrapped around the girl, their faces just inches apart.

Now
we’re being pushed back faster than we can walk, everyone trying to get away at
once. The woman’s dragged the girl onto the floor now and she’s on top of her.
Jesus... she’s vomiting into her face. Dirty brown gunk. It’s blood or sick or
germ-filled spit... Christ, that’s foul.

I
try to untangle the trolley. It’s caught up with someone else’s.

‘But
what about the shopping?’

The Law and Dan Mesa by Dan Sears
Gunn's Golden Rules by Gunn, Tim, Ada Calhoun
Statue of Limitations by Tamar Myers
America's Unwritten Constitution: The Precedents and Principles We Live By by Amar, Akhil Reed
Nothing to Lose But My Life by Louis Trimble
Tides of Light by Gregory Benford
Light Thickens by Ngaio Marsh
Galaxies Like Grains of Sand by Brian W Aldiss
Murder Is Secondary by Diane Weiner
Seaside Secrets by Melissa Foster