The Cold War: A MILITARY History 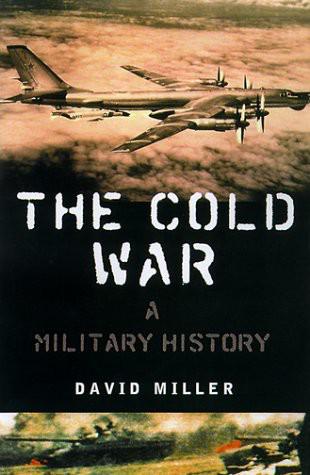 PART I: THE TWO GREAT ALLIANCES

1. ‘A Bewildered, Baffled and Breathless World’

2. The Birth of NATO

7. The Nature of Nuclear War

12. The Other Strategic Nuclear Powers

PART IV: THE LAND BATTLE ON THE CENTRAL FRONT

31. The Mechanics of Going to War

35. If Nuclear War had Come

37. The Cold War in Retrospect

3. The Warsaw Treaty of Friendship, Co-operation and Mutual Assistance

4. Equivalent Ranks and the ‘Star’ System

28. A Hypothetical US Counter-Force Attack on Soviet Strategic Forces in 1986

From 1949 to 1991 the world was overshadowed by the Cold War. Repeatedly it seemed that in days, even hours, global nuclear conflict would sweep away much of the United States, the Soviet Union and Europe. They would be obliterated in what President Carter described as ‘one long, final and very bleak afternoon’. When the Cold War ended, the Warsaw Pact was wound up and the vast military forces which had flourished for over forty years were disbanded. As with all wars, however, it was only then that the realities of what had been involved began to emerge; indeed, much has remained hidden until now. In The Cold War, David Miller discloses not only the vast scope of the military resources involved, but also how nearly threat came to terrible reality. Most chillingly of all, he reveals that while the menace of nuclear war predominated, it was actually little understood even by the experts. The book examines each military area in turn, covering the formation of the two great alliances, and the strategies and major weapons in the rival navies, armies and air forces. That the Cold War ended without a conflict was due to professionalism on both sides. The result, Miller suggests, would have impressed the Chinese military strategist, Sun Tsu, who, writing in the fifth century BC, said that ‘to subdue the enemy without fighting is the acme of skill’.

David Miller’s entire 36-year military career in the British army was spent, like the careers of countless others, under the threat of the Cold War. This book is the result of first-hand experience at the time and of extensive research since. A freelance journalist and author, he has published 25 previous books, most of them on defence subjects.

3.
NATO at work: President Kennedy in West Berlin, 1963, and the North Atlantic Council meeting in The Hague, May 1979

4.
Confrontation on the streets of West Berlin, October 1961: Soviet tanks and US tanks

5.
Confrontation: in the skies and in public opinion

6.
The Warsaw Pact on exercise and in the conference chamber

9.
Land-based strategic power: the US Minuteman and Soviet MIRV warheads

10.
The original battlefield nuclear weapons: the US army’s 280 mm ‘atomic cannon’ and the shell that it launched

14.
Different solutions to the air-defence problem: the Soviet ZSU-23-4 and the US Sergeant York

15.
The results of an early attempt to achieve standardization: the French AMX-30 tank and the West German Leopard 1

16.
The symbol of the end of the Cold War: East German guards look on as a West Berliner attacks the Wall, November 1989

2.
Central Europe: The Cockpit of the Cold War 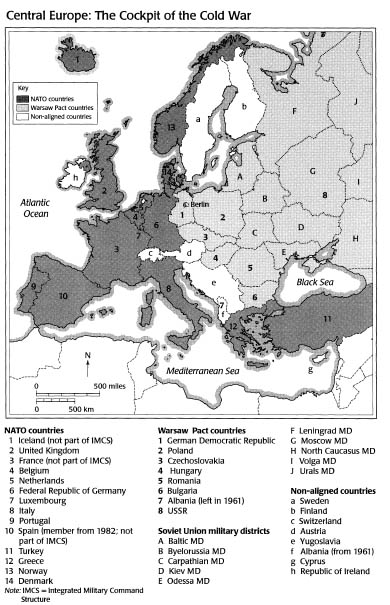 This book is dedicated to the officers, soldiers, sailors, marines and airmen of all the NATO and Warsaw Pact countries. For forty years they did their duty to their countries, and between them they ensured that the Third World War never started
.

The Cold War, which seemed such an ever-present reality just a few years ago has now been relegated to history. The mighty armies that faced each other across so many borders in northern, central and southern Europe are now but shadows of their former selves. The navies which patrolled the seas have dispersed, and former enemy armies now spend most of their time on common exercises and in comforting each other about the glories that are gone. The air forces, too, are bemused by the changes that a few years have wrought; vast orders for the most complex and sophisticated machines ever invented by man have been cancelled, training is now minimal, and recruits are hard to find; indeed, some even question the need for air forces at all.

The armed forces were, however, only the public face of the international effort put into the prosecution of the Cold War. Entire industries depended upon the Cold War – tank production, warship construction, warplane manufacturing – as also did many less obvious concerns such as electronics, power-plant and machinery manufacturers. Virtually all governments involved in the Cold War ensured that their national plans revolved around preparing for, fighting and surviving a possible Third World War. Indeed, when the Cold War ended, many things came to light that show just how thorough and far-reaching the preparations had been. Buried headquarters and survival shelters, which only a very select few had ever known about, were advertised for sale. Huge strategic stockpiles of commodities such as coal, oil, sugar and flour were publicly acknowledged and sold off. Secret arsenals of weapons for use by guerrilla forces were revealed, even in ostensibly neutral countries such as Austria. But many more facets of the conflict probably remain unknown, even to this day.