Read The City PI and the Country Cop Online 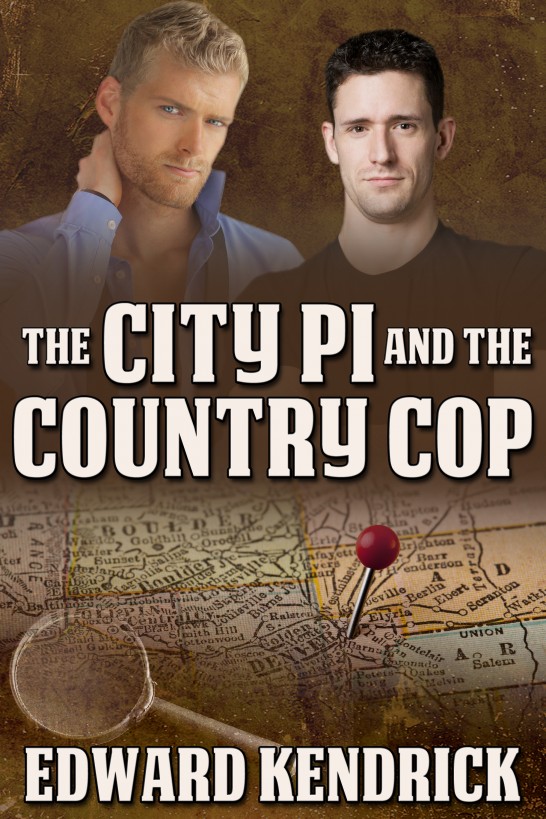 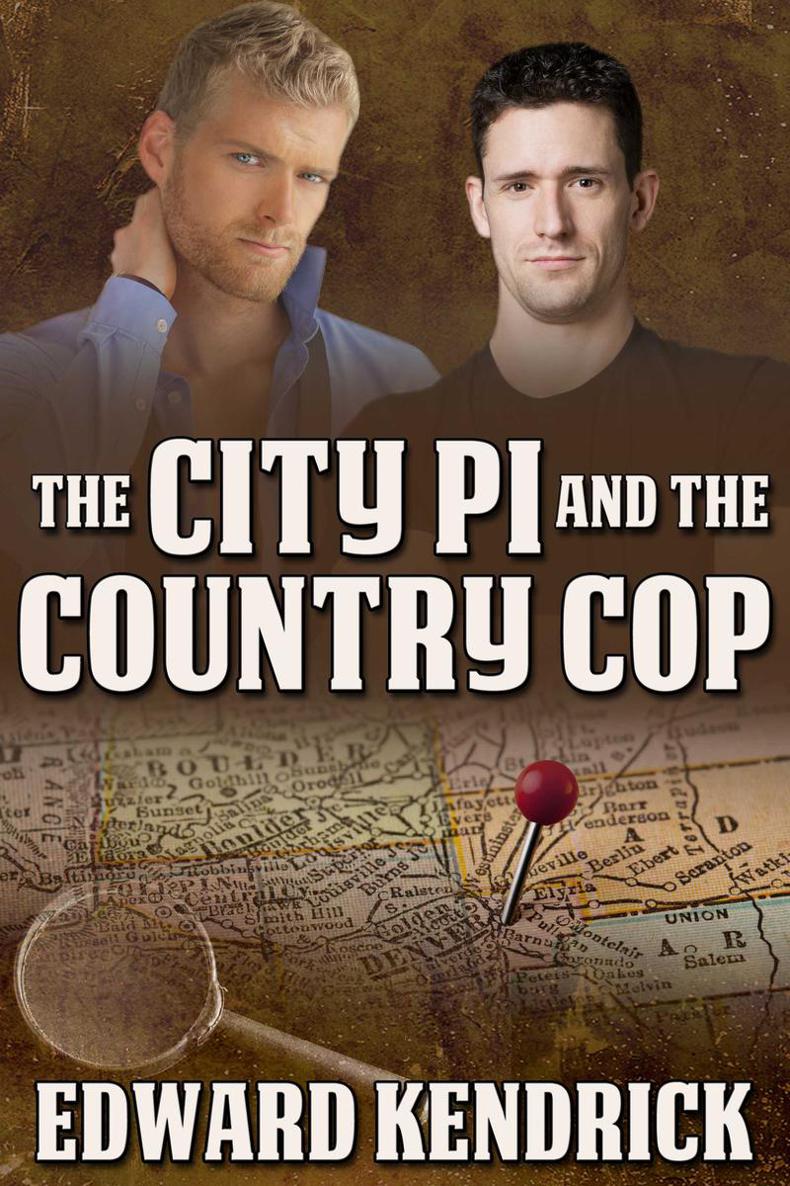 WARNING: This book is not transferable. It is
for your own personal use. If it is sold, shared, or given away, it
is an infringement of the copyright of this work and violators will
be prosecuted to the fullest extent of the law.

No portion of this book may be transmitted or
reproduced in any form, or by any means, without permission in
writing from the publisher, with the exception of brief excerpts
used for the purposes of review.

This book is for ADULT AUDIENCES ONLY. It may
contain sexually explicit scenes and graphic language which might
be considered offensive by some readers. Please store your files
where they cannot be accessed by minors.

This is a work of fiction. Names, characters,
places, and incidents are solely the product of the author’s
imagination and/or are used fictitiously, though reference may be
made to actual historical events or existing locations. Any
resemblance to actual persons, living or dead, is entirely
coincidental.

Published in the United States of
America.

“My best friend when I was in high school
died when he was seventeen,” Teague Donovan said pensively, rolling
his bottle of beer between his hands. “No, not died. He was killed.
Murdered.” He raised his head, his deep blue eyes—above a thin nose
and well-defined lips—meeting those of the man he considered his
second in command.

“Damn, Teague. Did they catch the bastard?”
Jake asked.

“Nope. Hell, for the longest time everyone
thought he—his name was Chris. They thought he’d run away again. He
just…disappeared. I was probably the last one in town to see him.
It was the day after I graduated.” Teague took a drink before
continuing. “Anyway, like I said, he was seventeen and didn’t have
anyone other than his three brothers—and me. His mom died in a car
accident a couple of years before. Oh, there were relatives, and
the boys were farmed out to them, all around the country. Chris ran
from his uncle’s home as soon as he could, coming back to our town
where his oldest brother lived with an aunt. She rather reluctantly
let Chris stay. Well, until she found out he wasn’t the type of kid
she was willing to have around.”

Jake tilted his head in question.

“Chris was gay,” Teague told him. “Not what a
devoted church-going lady wanted in her house, so she kicked him
out. It was almost the end of the school year and my folks told him
he could stay with us until then. The morning after I graduated, I
drove him to the bus station while trying to convince him to stick
around.” Teague shrugged. “He didn’t. They found his body five
months later, but no one knew it was him. He was listed by the cops
as an unidentified male, 15 to 18 years old. It wasn’t until two
years ago that the cops finally put a name to his body.”

“All they had was his fingerprints but back
when he was murdered fingerprint databases weren’t very extensive.
And DNA? Using it was still in its infancy in ‘87. So his identity
remained a mystery until a police detective opened the cold case on
a serial killer who had murdered two other boys the same way Chris
was killed. He was the third—the unidentified victim. The cop
decided to run Chris’s prints again. This time they came back with
a name because Chris had once been arrested for a minor
felony.”

“They never found the killer?”

“I told you they didn’t,” Teague said
sourly.

“So why are you telling me this?”

“Because the guy, the killer, appears to have
surfaced again.”

Jake shook his head. “Three guesses. You want
us to try to catch him.”

“Yeah.” Teague finished his beer and set the
bottle down—hard—on the coffee table in his den. “If it wasn’t for
me, Chris’s aunt wouldn’t have found out he was gay and he wouldn’t
have left town. So I owe him. Finding his killer is the only way I
can repay that debt.”

Jake looked at Teague in shock. “You told
her?”

Teague shook his head. “She caught us out
back in the barn. We weren’t doing anything but kissing and a bit
of playing around but—” he spread his hands, “—she got the message
loud and clear.”

Teague smiled dryly. “Yep. It hit the fan. My
folks knew about me, which is why they were willing to let Chris
stay with us, as long as he and I behaved. We did, which didn’t sit
well with him. He told me he was getting out of town the day after
school ended for the year, and nothing I could say would change his
mind.”

“Okay, so if this killer’s starting up again,
why aren’t the cops on top of it? And how do you figure we stand a
better chance of stopping him than they do?”

“I’m not certain we stand a
better
change, but for me at least it’s personal. For them it’s just
another case. Sure, they want to catch the bastard, but they’ve got
dozens of other things on their agenda as well.”

“We’re not exactly sitting around twiddling
our thumbs, as much as my wife might disagree at times,” Jake
pointed out.

“True, but you can handle what we have going
at the moment.”

“Uh-huh. Now I see where this is heading. I
do all the day-to-day work, while you spend every waking moment
trying to track down a shadow. An old one since it’s been well over
twenty years since he killed those boys.”

“Twenty-seven years at this point.” Teague
barely smiled, adding, “Stop grousing. You have the rest of the
team to help you.”

“Yeah, but you’re the brains. The organizer.
It’s your agency. I’m just one of the investigators.”

“The best one, Jake. If you weren’t I
wouldn’t be telling you all this and leaving the agency in your
very capable hands until I find the bastard.”

“It’s not going to be easy, Teague. First
off, how do you know this recent killing is the work of the same
person who murdered those boys twenty-seven years ago? It could be
a copycat, or a coincidence. The original killer would have to be
what, at least in his early fifties by now?”

Teague chuckled ruefully as he got up to get
another beer from the fridge in the corner of the den. “From my
vantage point, at forty-five, fifty isn’t that old.” He looked
questioningly at Jake and handed him a fresh beer when he
nodded.

After taking it, Jake asked, “How did you
find out about Chris being identified?”

“I’ve kept in touch with Chris’s brother,
Mike. He called me after the cops notified him. Chris had been
buried in an unmarked grave in the Collingswood cemetery. That’s
the town where he was murdered. Mike claimed Chris’s remains, had
them cremated and brought the ashes home with him. They’re in the
family plot now.”

“That’s the memorial you went out of town for
a couple of years ago?”

“Mike.” Teague hugged Chris’s brother briefly
once they were inside Mike’s house. “I’m…”

“Sorry?” Mike smiled tightly. “If nothing
else, now we know what happened to him. But damn.” He sighed as he
led Teague into the living room. “Thanks for coming.”

“It was the least I could do since it was
my—”

“It
wasn’t
your fault, Teague. Even if
Aunt Belle hadn’t caught the two of you together, he still would
have left. He wasn’t any happier here than he had been with Uncle
Tom, when it came right down to it. You’re the only reason he stuck
around until the end of the school year.”

“I suppose.” Teague looked at the woman who
had just entered the room.

“Teague, this is my wife, Alice,” Mike said
by way of introduction.

Teague smiled, saying, “It’s nice to meet
you. Mike’s told me…well not a lot but some about you.”

“That puts us in the same boat,” she replied.
“I know something about you, too. Like the fact you were Chris’s
best friend.”

Nodding, Teague told her, “Not that it did
any good at the end. I couldn’t convince him not to leave. If I had
he’d still be alive.”

“You don’t know that,” Mike put in. “He was
always a restless kid with a big wanderlust.”

“Mike’s right,” a man who vaguely resembled
Mike said as he and a second man came into the room. “You probably
don’t recognize us anymore. I’m Steve and this is Paul. We’re Mike,
and Chris’s, younger brothers, although I suspect you’re aware of
that.”

When Steve held out his hand, Teague shook
it, replying, “You’re right, I don’t really remember you except as
kids before your mom died.”

“Yeah,” Paul said tightly. “You were only
interested in Chris from what I recall.”

Teague winced. “Yeah, I guess I was.”

“Enough,” Mike said sharply. “What happened,
happened, and it was
not
Teague’s fault. We’ve already
discussed this, Paul.”

Scowling, Paul started toward one of the
chairs opposite the sofa then obviously changed his mind and left
the room.

“Sorry about that,” Mike said. “I’m afraid
Paul takes after Aunt Belle in some ways.”

“In other words he’s got no use for anyone
who’s gay,” Teague replied.

“Pretty much. Whether you realized it at the
time or not, he adored Chris when we were kids. Then after mom died
and we were separated, he got sent to live with our other aunt.”
Mike grimaced. “She made Aunt Belle look like a flag-waver for gay
rights. And then, when he found out that Chris was gay…”

“Oh boy. Okay, I’ll steer clear of Paul as
best I can while I’m here. That shouldn’t be too hard since the
memorial service is tomorrow morning.”

“I for one am glad you came,” Steve said. “At
least it means there’ll be someone at it besides us and the few
ghouls who will show up because of the way Chris died.”

“That was horrible,” Alice murmured.

“No. The way he was killed.” She
shuddered.

All the men nodded sadly. According to what
Mike had told Teague when he asked, the coroner had determined that
each victim had been sodomized repeatedly with a foreign object and
then strangled, while hogtied, in such a way that their deaths were
very slow and painful.

“And now someone is doing it again,” Teague
said, only realizing he spoken aloud when Jake asked what he meant.
He explained the details of how the serial killer had murdered the
three boys almost thirty years ago.

“Yeah. I can’t begin to imagine what they
went through at the hands of that son-of-a-bitch.”

“There was nothing to give the cops at the
time any clue who it might have been?’’

“Not that I know about. But then, as the
detective pointed out, I’m not a cop so he wasn’t about to reveal
details even though they are cold cases.”

“You talked to him?”

“Two years ago. Right after I got back from
the memorial service. Mike gave me his name. Detective Slater. He
sounded like a decent man but not about to give out information
despite my telling him that I’d gotten his name from Mike, I had
known Chris, and I ran my own private detective agency.”

Jake chuckled. “That last probably turned him
off big time.”

“Actually it didn’t seem to bother him in the
least, but then I wasn’t there watching him talk. His body language
could have told a totally different story and he was just being
polite.”