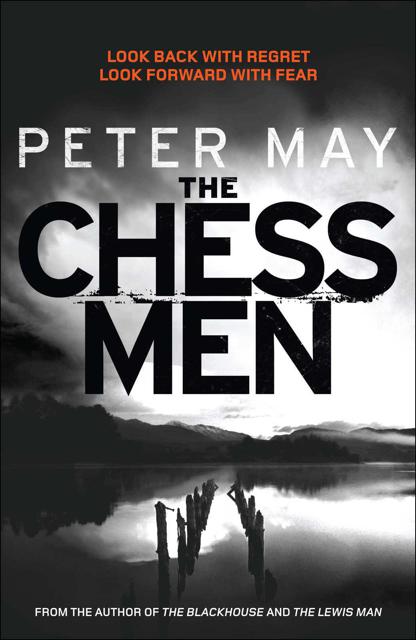 First published in Great Britain in 2013 by

The moral right of Peter May to be identified as the author of this work has been asserted in accordance with the Copyright, Designs and Patents Act, 1988.

All rights reserved. No part of this publication may be reproduced or transmitted in any form or by any means, electronic or mechanical, including photocopy, recording, or any information storage and retrieval system, without permission in writing from the publisher.

This book is a work of fiction. Names, characters, businesses, organizations, places and events are either the product of the author’s imagination or are used fictitiously. Any resemblance to actual persons, living or dead, events or locales is entirely coincidental.

You can find this and many other great books at:
www.quercusbooks.co.uk

Also by Peter May

In loving memory of wee Jennifer

’Tis all a Chequer-board of Nights and Days
Where Destiny with Men for Pieces plays:
Hither and thither moves, and mates, and slays,
And one by one back in the Closet lays.

–
The Rubaiyat of Omar Khayyam
, xlix

He sits at his desk, grey with fear and the weight of this momentous step which, once taken, cannot be taken back. Like time and death.

The pen trembles in his hand as he writes.

This has been on my mind for some time. I know most people will not understand why, especially those who love me, and whom I also love. All I can say is that no one knows the hell I have lived through. And these last weeks it has become, simply, unbearable. It is time for me to go. I am so sorry.

He signs his name. The usual flamboyant scrawl. Illegible. And folds the note, as if in hiding the words he can somehow make them go away. Like a bad dream. Like the step he is about to take into darkness.

He rises now, and looks around his room for the last time, wondering if he really has the courage to go through with it. Should he leave the note or should he not? Will it really make any difference? He glances at it, fallen open now, and propped against the computer screen where he hopes it will be obvious. The pain of
regret fills his heart as his eye follows the looping letters he learned to write all those years before when his whole life still lay ahead of him. A bittersweet recollection of innocence and youth. The smell of chalk dust and warm school milk.

How pointless it all has been!

When Fin opened his eyes the interior of the ancient stone dwelling which had sheltered them from the storm was suffused with a strange pink light. Smoke drifted lazily into the still air from the almost dead fire and Whistler was gone.

Fin raised himself up on to his elbows and saw that the stone at the entrance had been rolled aside. Beyond it he could see the rose-tinted mist of dawn that hung over the mountains. The storm had passed. Its rain had fallen, and it had left in its wake an unnatural stillness.

Painfully, Fin unravelled himself from his blankets and crawled past the fire to where his clothes were spread out across the stone. There was a touch of damp in them still, but they were dry enough to put on again, and he lay on his back and wriggled into his trousers before sitting up to button his shirt and drag his jumper over his head. He pulled on his socks and pushed his feet into his boots, then crawled out on to the mountainside without bothering to lace them up.

The sight that greeted him was almost supernatural. The mountains of south-west Lewis rose up steeply all around,
disappearing into an obscurity of low clouds. The valley below seemed wider than it had by the lightning of the night before. The giant shards of rock that littered its floor grew like spectres out of a mist that rolled up from the east, where a not yet visible sun cast an unnaturally red glow. It felt like the dawn of time.

Whistler stood silhouetted against the light beyond the collection of broken shelters they called beehives, on a ridge that looked out over the valley, and Fin stumbled over sodden ground with shaking legs to join him.

Whistler neither turned nor acknowledged him. He just stood like a statue frozen in space and time. Fin was shocked by his face, drained as it was of all colour. His beard looked like black and silver paint scraped on to white canvas. His eyes dark and impenetrable, lost in shadow.

But Whistler said nothing, and Fin turned to see what he was staring at. At first, the sight that greeted him in the valley simply filled him with confusion. He understood all that he saw, and yet it made no sense. He turned and looked back beyond the beehives to the jumble of rock above them, and the scree slope that rose up to the shoulder of the mountain where he had stood the night before and seen lightning reflected on the loch below.

Then he turned back to the valley. But there was no loch. Just a big empty hole. Its outline was clearly visible where, over eons, it had eaten away at the peat and the rock. Judging by the depression it had left in the land, it had been perhaps a mile long, half a mile across, and fifty or sixty feet deep.
Its bed was a thick slurry of peat and slime peppered by boulders large and small. At its east end, where the valley fell away into the dawn mist, a wide brown channel, forty or fifty feet across, was smeared through the peat, like the trail left by some giant slug.

Fin glanced at Whistler. ‘What happened to the loch?’

But Whistler just shrugged and shook his head. ‘It’s gone.’

‘How can a loch just disappear?’

For a long time Whistler continued to stare out over the empty loch like a man in a trance. Until suddenly, as if Fin had only now spoken, he said, ‘Something like it happened a long time ago, Fin. Before you or I were born. Sometime back in the fifties. Over at Morsgail.’

‘I don’t understand. What do you mean?’ Fin was filled with confusion.

‘Same thing. Postie used to pass a loch on the track between Morsgail and Kinlochresort every morning. Way out in the middle of bloody nowhere, it was. Loch nan Learga. So one morning, he’s coming down the track as usual, and there’s no loch. Just a big hole where it used to be. I’ve passed it many times myself. Caused a hell of a stir back then, though. The newspaper and television people came all the way up from London. And the things they speculated on . . . well, they seem crazy now, but they filled the airwaves and the column inches of the papers at the time. The favourite was that the loch had been hit by a meteor and evaporated.’

‘And what
had
happened?’

Whistler lifted his shoulders then dropped them again. ‘Best theory is that it was a bog burst.’

Whistler made a moue with his lips, his eyes still drawn to the slime-filled basin of the disappeared loch. ‘Well . . . it can happen when you get a long spell without rain. Not very common here.’ He nearly smiled. ‘The surface peat dries up and cracks. And as any peat-cutter knows, once it’s dry the peat becomes impervious to water.’ He nodded towards where the giant slug trail led off into the mist. ‘There’s another loch down there, lower in the valley. If I had any money, I’d put it on this one having drained down into the other.’

‘Most of these lochs sit on peat lying over Lewisian gneiss. Quite often they’re separated by ridges of something less stable, like amphibolite. When the dry spell is followed by heavy rain, like last night, the rainwater runs through the cracks in the peat creating a layer of sludge above the bedrock. Chances are that what happened here is that the peat between the lochs simply slid away on the sludge, the weight of the water in the upper loch burst through the amphibolite, and the whole bloody lot drained down the valley.’

There was a stirring of air as the sun edged a little higher, and the mist lifted just a touch. Enough to reveal something white and red catching the light at what must have been the deepest part of the loch.

‘What the hell’s that?’ Fin said, and when Whistler made no reply, ‘Do you have binoculars?’

‘In my rucksack.’ Whistler’s voice was little more than a breath.

Fin hurried back to their beehive and crawled inside to find Whistler’s binoculars. When he got out to the ridge again, Whistler hadn’t moved. He continued to stare impassively at the hole where the loch had once been. Fin raised the binoculars to his eyes and adjusted the lenses until the red-and-white object came clearly into focus. ‘Jesus!’ he heard himself whisper, quite involuntarily.

It was a small, single-engined aircraft, cradled among a cluster of boulders, and lying at a slight angle. It appeared to be pretty much intact. The windows of the cockpit were opaque with mud and slime, but the red and white of the fuselage was clearly visible. As were the black-painted letters of its call-sign.

Coaster by Bathey, Lorena
The Best of Lucius Shepard by Lucius Shepard
The Draig's Woman by Wadler, Lisa Dawn
There Comes A Prophet by Litwack, David
Brody & Hannigan 02 - Grand Theft Lotto by Paula Graves
An Agreeable Arrangement by Shirley Marks
The Faerie Queen (The Faerie Ring #4) by Kiki Hamilton
The Sexy Stranger Bundle by Madison, Tiffany
Embracing the Spirits: True Stories of My Encounters With the Other Side by Barbara Parks
The Lifecycle of Software Objects by Ted Chiang