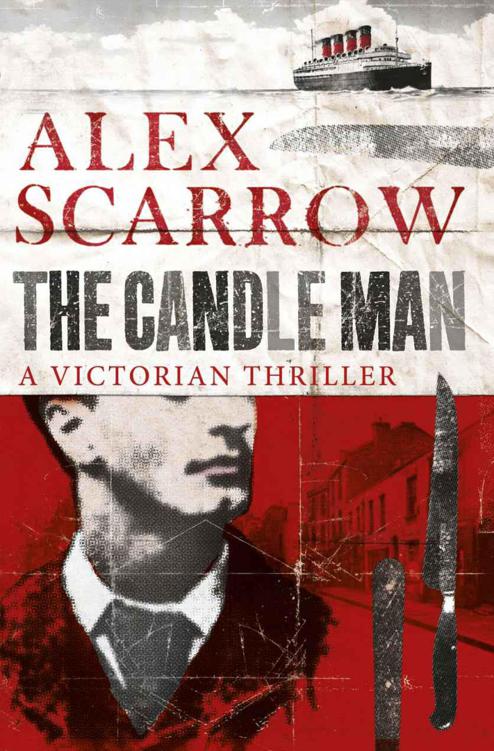 To my wife, Frances – my partner in crime.

S
he was tilting already, he could just detect the subtle hint of it; enough of a tilt that the service trolleys, all on well-oiled castors, seemed
to have quietly drifted to the far end of the reading room.

He looked up from his brandy glass and watched as men in evening suits outside on the promenade deck rushed past the saloon windows, gawping at, laughing excitedly at, the slowly receding peak
of the iceberg. No more than an interesting diversion for them, like an unscheduled port visit.

But the fools haven’t noticed the engines have stopped
.

He turned in his armchair. ‘Yes?’

It was one of the stewards he rather liked: a short, cheerful, ruddy-faced man called Reginald. He was pushing a wheelchair occupied by a pale-looking young woman.

‘Would you mind Miss Hammond sitting with you awhile, sir? There’s a lot of commotion going on about the deck . . .’ He smiled disarmingly. ‘A lot of unnecessary
runnin’ around, if you ask me. The lady will be better off in here for now, I fancy.’

The steward parked the chair opposite him and turned to leave.

‘Reginald, you’ll not forget her, I hope?’

‘When you start loading up the lifeboats? You’ll not forget her, I trust?’

‘
Lifeboats
, sir?’ The steward’s eyebrows knitted together above a vaguely patronising smile. ‘Oh, I certainly don’t think we’ll be getting those out tonight,
Mr Larkin.’

Larkin glanced at the young woman sitting opposite him, little more than a girl, really. The mention of lifeboats had turned her skin a shade paler. He spread his hands apologetically.

Reginald’s eyes met his and in that fleeting moment confirmed what he already suspected. That the ship was going down, albeit very slowly. Gracefully, even. But she was going down
nonetheless.

She looked at Larkin uncertainly.

‘Right you are, sir.’ The steward turned to leave them with a touch more haste than perhaps he’d intended.

Alone now. Just the two of them in the reading room, the crystal chandeliers jangling softly like wind chimes, the growing mélange of voices from the promenade deck and the deck below
muted to a background hubbub through the closed windows.

He glanced up from his brandy glass at her. She wasn’t just pale. She was clearly very ill. Perhaps even dying. Something, then, the pair of them had in common. His eyes wandered down from
the pale and delicate oval of her face to the painfully thin frame of her body. She looked as fragile as a freshly hatched chick.

‘Is there not someone else travelling with you?’

Her eyes darted from the windows to him and then back outside to the excited gentlemen in their dinner jackets.

‘My guardian. She went outside to find out what is going on,’ she replied in a small voice. She caught his eyes studying her. ‘If you are wondering . . . I have a
muscle-wasting disease. The family physician believes I will not last until the summer.’ She sighed. ‘One more summer would have been nice.’

The old man leant forward. ‘Then I’m afraid we both will miss this summer,’ he said.

‘You are unwell too?’

He nodded. ‘I have a cancer. I shall be lucky to enjoy more than a few more months.’

She smiled sadly. ‘Then you’re right. No more summers for either of us.’

‘I fancy we won’t be missing much. Another summer of grey skies and wet days.’

They listened to the animated chattering of the men outside, rubbing their hands and fidgeting from one foot to the other to stay warm. Plumes of breath and cigar smoke clouded the
promenade.

‘Why did you ask about the lifeboats?’ the young woman asked. ‘You don’t think we’re in trouble, do you?’

The old man swilled the half full glass of brandy in his hand.

‘Do you think we will sink, Mr Larkin?’

He was tempted to offer her a platitude. A verbal placebo. But then he suspected, despite her sparrow-like fragility, that she was made of sterner stuff. It appeared she’d already accepted
her mortality; that, for her, there was a very clearly bookmarked ending to her life. He could patronise her, but perhaps that didn’t do her justice.

‘Yes,’ he replied. He nodded towards the service trolleys gathered in a conspiratorial huddle against one wall. ‘Do you see? We are already listing to the stern.’

He laughed at that. ‘Now doesn’t that sound like hubris to you?’

‘I would imagine a big enough hole will sink
any
ship.’

She gave that some thought. ‘The steward
was
frightened. I’m certain of it. I could hear it in his voice.’

He nodded. ‘It’ll be his job now – Reginald and the other stewards – to pretend all is well for as long as they possibly can whilst preparations are made.’

‘Only for the lucky few.’

She frowned. Dark caterpillar eyebrows above piercing, intelligent eyes. ‘I take it you have counted them too?’

He smiled, wondering for a moment what things this clever young woman might have gone on to do, to achieve, if her bookmark had been advanced to allow another dozen chapters in her life.

‘Indeed. I should say there are enough boats for only a third of the people aboard.’

She nodded. ‘I did wonder about that.’

He looked out of the saloon windows at the men outside. ‘There will be boats for the first-class passengers, of course. And the crew. But those unfortunate people on deck “C”
and below will be without.’

‘They will have life-preservers, though?’

He shrugged. ‘I presume so, but this sea is freezing. I’d imagine they’ll not last an hour in it.’ He pursed his lips. ‘Which is why I rather fancy staying put
here. Since I don’t have a great deal of time left . . . someone else might as well have my place.’ He laughed softly. ‘And I shall imagine my sacrifice is made for some young
soul with great plans, who will change the world for the better.’ He drained his glass. ‘And this brandy will make that sacrifice a great deal easier.’

He got up from his armchair, wandered over to the bar and retrieved another bottle of Rémy Martin from the glass cabinet. He closed the door. Slowly, it swung open again.

He rejoined Miss Hammond and set another glass on the table.

She looked at it meaningfully. ‘You think I’ve been
left
here, don’t you?’

He said nothing as he refilled his glass.

‘You think the steward was under orders to just leave me here, don’t you? A cripple in a wheelchair?’

‘I think poor Reginald has a lot of things on his mind, principally hoping he has a place reserved aboard one of those lifeboats.’ He sniffed the brandy in his glass. ‘Sat down
in here with me, you’re one less thing he has to worry about.’

He poured her a half glass, more than one would normally pour into a brandy bowl, and passed it to her. ‘The more we drink, my dear, the less we’re going to care.’

She nodded and took a hefty swig. She made a face as she swallowed it. ‘Urgh! I’ve never drunk brandy before.’

He laughed. ‘And now you have.’

She recovered her composure and smacked her lips appreciatively. ‘I think I like it better than the sweet sherry my aunt insists on serving.’

They sipped from their glasses in silence for a while, listening to the whoop of excitement from the promenade deck as an emergency flare was launched and exploded high in the night sky with a
soft pop.

‘Are you travelling with anyone?’ she asked after a while.

He shook his head. ‘I am alone.’ He studied her face, a second question written in the arc of one raised eyebrow. ‘I wanted to visit America,’ he added.

‘To see the sights? Myself too.’

‘To find someone, actually.’

She looked intrigued. ‘Find someone? Family?’

‘Indeed.’ He was reluctant to give her any more than that.

Her skin had a touch of colour now: faint florets of pink on the side of her pale neck.

‘Someone once told me that on every deathbed there’s a story to be told.’ She shrugged. ‘If you’re indeed right, I suppose we shan’t get to lie on our
deathbeds now.’

‘Perhaps tonight’s a better way to go for the pair of us, then?’

Her face flickered with a moment of fear that slowly transformed and relaxed into a sanguine expression of acceptance. Perhaps the brandy was working on her; perhaps it was the realisation that
going down with the ship tonight was going to save her the weeks, maybe months, of bed-ridden pain ahead.

‘Truth be told, I wouldn’t have much of a deathbed story. I’m nineteen. I’ve done little with my life but attend one school after another.’ She tossed her head back
and emptied her glass. ‘What about you? I suspect you’ve lived long enough to acquire a deathbed tale or two.’

She held out her glass for a refill. ‘Tell me your story, then,’ she said with a teasing smile and the slightest slur. ‘I won’t tell a soul.’ She giggled.

He filled her glass and topped up his, the bottle of brandy already a third empty. He settled back in his armchair.

‘My story?’ His rheumy eyes found a place inside him: old memories, dusting them off one last time. ‘My deathbed story?’

He gave it a few moments’ thought, then finally nodded. ‘Why not?’ He sipped his brandy. ‘I should say it happened . . . let me see . . . just about five years before you
were born.’

‘Yes.’ Larkin stroked his cheek absently. ‘And it all happened over the summer and the autumn.’ His grey eyes twinkled with moisture as they met hers. ‘London.
Whitechapel, to be precise.’

River Marked by Briggs, Patricia
Stay With Me Tonight: A Drake Brothers Series (PART 1) by Whitney D.
Nightingale by Fiona McIntosh
The Memory of Trees by F. G. Cottam
Chaos Theory by M Evonne Dobson
The Mostly True Story of Jack by Kelly Barnhill
The Black Sentry by Bernhardt, William
Moving Among Strangers by Gabrielle Carey
Sunburn by Laurence Shames
The Whole World Over by Julia Glass