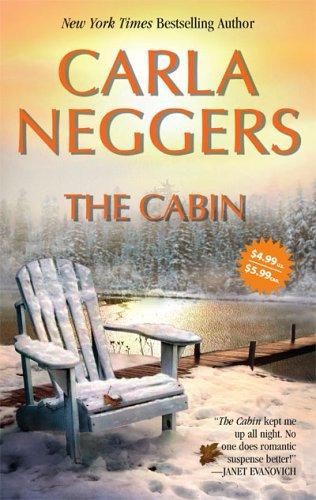 Praise for the novels of

and colorful characterizations sweep the

reader toward a dramatic and ultimately

—
Publishers Weekly
on
The Cabin

“Tension-filled story line that grips the

audience from start to finish.”

—
Midwest Book Review
on
The Waterfall

“Carla Neggers is one of the most distinctive,

talented writers of our genre.”

that shines with sincere emotion.”

—
Publishers Weekly
on
The Carriage House

with well-written characters to make this

an exciting read. Readers will enjoy

it from beginning to end.”

—
Romantic Times
on
The Waterfall

“Gathers steam as its tantalizing mysteries

explode into a thrilling climax.”

—
Publishers Weekly
on
Kiss the Moon

next novel of romantic suspense

One of the great pleasures in finishing a book is getting

the chance to express my gratitude to the many generous,

knowledgeable people who took time from their own busy

schedules to answer my questions. Christine Wenger not

only answered every question I put to her—she made

calls for me, read me penal codes, fact-checked and was

an all-around pal who never told me to go away. (Well,

she did, but I didn’t take her seriously!) My wonderful friend

Dorice Nelson and her husband, Shel Damsky, opened their

gorgeous home to me and showed me the history and

landscape of the Adirondacks as I’ve never seen them

Many thanks also to Meena Cheng for talking money with

Len Baxter and all my family and many friends in Texas—

Finally, I want to thank everyone at MIRA Books—especially

Of course, any mistakes I’ve made and liberties I’ve taken are

my doing. This is a story of pure fiction, straight out of my

imagination, and I couldn’t have had more fun writing it.

Watch for Sam Temple’s story next!

To Kate Jewell of central Vermont,

Mikisha Doop of west Tennessee and

who all came together on that frightening

and made it through. You’re an inspiration.

Susanna Galway sipped her margarita and watched the

countdown to midnight on the television above the bar

at Jim’s Place, the small, dark pub just down the street

from where she lived with her grandmother and twin

teenage daughters. It had been a fixture in the neighbor-

hood for as long as Susanna could remember.

An hour to go. There’d be fireworks, a new year to

celebrate. It was a clear, dark, very cold night in Boston,

with temperatures barely in the teens, but thousands had

still gone out to enjoy the many First Night festivities.

suspicion. He made no secret that he thought she should

have gone back to her husband in Texas months ago. And

Jim laid a sparkling white bar towel on one of his

She licked salt off her glass. It was warm in the bar,

and she wished she hadn’t opted for cashmere. Silk

would have been better. She’d been determined to feel

a little bit elegant tonight. But Jim had already told her

she looked like the Wicked Witch of the East coming in

there in her black skirt, sweater and boots, with her long

her. Her coat was black, too, but she’d hung it up and

tucked her black leather gloves in her pocket before slid-

ing onto her stool. She hadn’t bothered with a hat since

the bar was only a few doors down from Gran’s house.

“I never feel sorry for myself,” she said. “I looked at

Jim snorted. “I know bullshit when I hear it.”

Susanna smiled at him, unrepentant. “You make a

pretty good margarita for a Yankee.” She set her glass

down. “Why don’t you make me another?”

“Okay, but two’s your limit. You’re not passing out

in my bar. I’m not calling your Texas Ranger husband

stools and hit her head—”

“Such drama. I’m not getting myself drunk, and

you’d call Gran, not Jack, because Gran’s just up the

street, and Jack’s in San Antonio. And I know you’re not

the least bit intimidated because he’s a Texas Ranger.”

Jim Haviland gave her a half smile. “Sixty-eight de-

Susanna refused to let him get to her. He was the fa-

ther of her best friend in Boston, her own father’s boy-

hood friend and a surrogate uncle to her these past

fourteen months since she’d been on her own up north.

He was opinionated, solid and predictable. “Are you

going to make me that margarita?” she asked.

“You should be in Texas with your family.”

“I had Maggie and Ellen for Thanksgiving. Jack has

them for Christmas and New Year’s.”

on the neighborhood snowblower.”

“It doesn’t snow in San Antonio,” Susanna said with

around her to get her through the night, and she was de-

termined nothing would penetrate it—not guilt, not fear,

not thoughts of the only man she’d ever loved. She and

Jack had done the holidays together last year. That

hadn’t worked out very well. Their emotions were still

too raw, neither ready to talk. Not that her husband was

ever
ready to talk.

“If you were Jack, you’d be investigating serial kill-

ers instead of making me margaritas. What fun would

that be?” She pushed her glass across the bar toward

him. “Come on. A nice, fresh margarita. You can reuse

my glass. Hold the salt this time if you want.”

“I’ll hold the liquor before I hold the salt, and I’m

not reusing your glass. Health laws.”

“There are six other bars within walking distance,”

Susanna said. “I have on my wool socks. I can find

somebody to serve me another margarita.”

“They all use mixes.”

But Jim Haviland didn’t call her bluff. He snatched

up her empty glass and set it on a tray, then grabbed a

fresh glass. His bar was impeccably clean. He offered

one nightly dinner special and kept an eye on his cus-

tomers, running his bar in strict accordance with Mas-

sachusetts law. People didn’t come to Jim’s Place to get

drunk—it was a true neighborhood pub, as old-fash-

ioned as its owner. Susanna had always felt safe there,

welcomed even when Jim was on her case and she

wasn’t at her nicest herself.

“I shipped Iris and her pals up a gallon of chili,” he

said. “How do you like that? Even your eighty-two-

midnight. Then they’re calling it quits and going to bed.”

Jim eyed her again, less critically. He was a big, pow-

erfully built man in his early sixties who treated Susanna

like an honorary niece, if a wayward one. “You went

And she’d meant for her and Jack to settle whatever

was going on between them, but the one time they were

alone, on New Year’s Eve, they’d ended up in bed to-

gether. They hadn’t settled anything.

Exactly one year ago, she’d been making love to her

Two margaritas weren’t going to do the trick. She

could get herself rip-roaring drunk, but it wouldn’t stop

her from thinking about where she’d been last year at

this time and where she was now. Nothing had changed.

Not one damn thing.

Fourteen months and counting, and she and Jack

were still in limbo, a kind of marital paralysis that she

knew couldn’t last. Maggie and Ellen were seniors in

They’d called a couple of hours ago, and Susanna had

assured them she was ringing in the New Year in style.

No mahjong with Gran and her pals. She didn’t want her

daughters thinking she was pitiful.

She hadn’t talked to Jack.

you close up the place? We can go up on the roof and

He looked up from the margarita he was reluctantly

fixing for her. His movements were careful, deliberate.

And his blue eyes were serious. “Susanna, what’s

“I bought a cabin in the Adirondacks,” she blurted.

“But that’s good. It’s a great cabin. It’s in a gorgeous

“The Adirondacks are way the hell up in New York.”

She nodded. “The largest wilderness area in the

on Blackwater Lake, you know. Her family used to own

head heavily, as if this new development—a cabin in the

Adirondacks—was beyond his comprehension. “You

should buy a place in Texas, not in the boonies of up-

state New York. What were you thinking? Jesus, when

“Last week. I went up to Lake Placid for a few days

on my own—I don’t know, it seemed like a positive thing

to do. I needed to clear my head. I saw this cabin. It’s not

all that far from my parents’ summer place on Lake

Champlain. I couldn’t resist. I figured if not now, when?”

“You and clearing your head. I’ve been listening to

that line for months. The only thing that’s going to clear

your damn head is marching your ass back to Texas and

sorting things out with your husband. Not buying cab-

ins in the freaking woods.”

Susanna pretended not to hear him. “Gran’s practi-

cally a legend in the Adirondacks, did you know that?

She was a guide in her teens and early twenties, before

she and my dad moved to Boston. He was just a little

tyke—I’m sure he doesn’t remember. Gran seemed a lit-

Jim shoved the fresh margarita in front of her, his jaw

She picked up the heavy glass, picturing herself

standing on the porch of the cabin, staring out at the ice

and snow on the lakes and surrounding mountains.