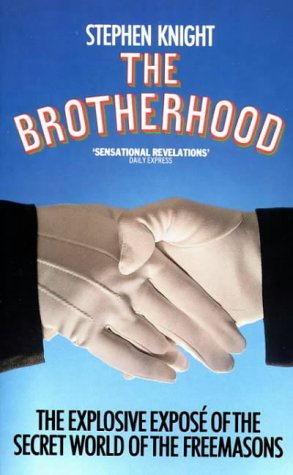 Stephen Knight is a freelance writer whose previous books include
Jack the Ripper: The Final Solution,
which created front-page headlines all over the world, and a novel,
Requiem at Rogano.

Jack the Ripper: The Final Solution

The Killing of Justice Godfrey

STEPHEN KNIGHT
The Brotherhood
The Secret World of the Freemasons

All rights reserved. No part of this publication may be reproduced, stored in a retrieval system, or transmitted, in any form, or by any means, electronic, mechanical, photocopying, recording or otherwise, without the prior permission of the publishers.

This book is sold subject to the conditions that it shall not, by way of trade or otherwise, be lent, re-sold, hired out or otherwise circulated without the publishers prior consent in any form of binding or cover other than that in which it is published and without a similar condition including this condition being imposed on the subsequent purchaser.

For Ma and Pa, with love

I am free to name only a small number of the many hundreds of people who have helped me with advice and information. Most of those who helped did so only on the understanding that I would say nothing that could lead to their identification. Among these were many Freemasons who feared recrimination from other members of the Brotherhood. Others included government officials, politicians, judges, policemen of all ranks, lawyers, churchmen, past and present officers of MI5 and MI6, and people from every sector of society touched on in the book.

Some of those I can name gave me valuable assistance; some contributed a fact or an idea, did some typing, obtained press cuttings or read my notes and gave encouragement here and there. To all of them, and to all those who must remain unnamed, I am grateful. Without such people a book of this kind could not be contemplated.

Two men must be singled out for special mention: Simon Scott, managing editor of New English Library whose idea this book was and who supported me with unflagging enthusiasm all through the research and writing only to have the project snatched from him at the last moment; and my friend and agent Andrew Hewson who has never, even at the busiest moments, been unavailable.

Thank you, Simon and Andrew, and thank you, Rev Saul

Freemasonry, although its leaders strenuously deny it, is a secret society. In England and Wales alone it has more than 600,000 initiates, with a further 100,000 in Scotland and between 50,000 and 70,000 in Ireland. All the members of this extraordinary Brotherhood are male. All except those who are second-, third-, or fourth-generation Freemasons, who may join at eighteen, are over the age of twenty-one. All have sworn on pain of death and ghastly mutilation not to reveal masonic secrets to outsiders, who are known to brethren as the 'profane'.*

The headquarters of the Brotherhood in England and Wales is in London, where the massive bulk of Freemasons Hall squats at the corner of Great Queen Street and Wild Street like a gigantic elephant's footstool. This is the seat of the United Grand Lodge of England, the governing body of the 8,000-plus Lodges in England and Wales. These Lodges, of which there are another 1,200-odd under the jurisdiction of the Grand Lodge of Scotland and about 750 under the Grand Lodge of Ireland, carry out their secret business and ritual in a deliberately cultivated atmosphere

*From the Latin
pro
(before) and
fanum
(the temple); i.e. one outside the temple, not initiated to the rites performed within
.

of mystery in masonic Temples. Temples might be purpose built, or might be rooms in hotels or private buildings temporarily converted for masonic use. Many town halls up and down the country, for example, have private function rooms used for masonic rituals, as does New Scotland Yard, the headquarters of the Metropolitan Police.

The Grand Lodges control what is known as 'craft' Freemasonry, and brethren often refer to the Brotherhood as 'the Craft'. Craft Freemasonry covers the three degrees of Entered Apprentice, Fellow Craft and Master Mason. The vast majority of Freemasons rise no higher than Master Mason, and most are under the impression that there are no higher degrees. Even many of those who go on to become Royal Arch Masons, governed not by Grand Lodge but by Grand Chapter, have no idea that the masonic ladder extends a further thirty rungs above those on the third who believe they have already reached the top.

There is an important distinction to be made between
Freemasonry,
which is the movement as a whole, and
Freemasons,
which describes any number of individual Masons. This appears self-evident, but confusion of the two ideas has led to some gross misunderstandings. Take the death of Captain William Morgan in America in 1826. There is evidence to suggest that Morgan, having revealed certain masonic secrets in his book
Freemasonry Exposed,
was kidnapped and murdered by Freemasons. There have been suggestions that Mozart, a Mason, was poisoned by members of the Brotherhood, allegedly for betraying masonic secrets in
The Magic Flute.
And in 1888, the Jack the Ripper murders in the East End of London were perpetrated according to masonic ritual. Purely because people, wilfully or innocently, have regarded the words
Freemasons
and
Freemasonry
as interchangeable, these deaths have frequently been blamed, not on various individual
Freemasons,
but on the whole Brotherhood.

Some people, even today, look upon Freemasonry as an underground movement devoted to murder, terrorism and revolution. Hence, we read of Freemasonry as a worldwide conspiracy and watch, through the clouded vision of certain woefully mistaken writers, the whole of world history since the Renaissance unfold according to masonic machinations.

Freemasonry is not a worldwide secret society. It is a secret society that, originating in Britain, now has independent offshoots in most of the non-Communist world. And although the British Grand Lodges recognize more than a hundred Grand Lodges (forty-nine of them in the USA), they have no control over them, and most reflect the character and political complexion of the country in which they operate. Far from being revolutionary, there is no organization more reactionary, more Establishment-based, than British Freemasonry. Its members derive benefit from the Brotherhood only so long as the status quo is maintained.

Nevertheless, Freemasonry has a potent influence on life in Britain - for both good and ill.

The Brotherhood's stated aims of morality, fraternity and charity are well known. Indeed, circumspect and even secretive about all of Masonry's other doings, the average member of the Brotherhood will be eloquent on the generous donations made by United Grand Lodge and individual Lodges to charity, both masonic and profane. In 1980, for instance, Grand Lodge gave away £931,750, of which just over £300,000 was for non-masonic causes. In addition, many thousands of Masons and their relatives have benefited from the Royal Masonic Institution for Girls ('for maintaining, clothing and educating the daughters of Freemasons'), the Royal Masonic Institution for Boys, the Royal Masonic Benevolent Institution, the Royal Masonic Hospital ('for Freemasons, their wives, widows and dependent children'), and the Masonic Foundation for the Aged and the Sick.

North of Boston by Elisabeth Elo
The Wet Nurse's Tale by Erica Eisdorfer
South Beach: Hot in the City by Lacey Alexander
The Shelter Cycle by Peter Rock
Because I am a Girl by Tim Butcher
Wilde Ride by Moores, Maegan Lynn
The Genius in All of Us: New Insights Into Genetics, Talent, and IQ by David Shenk
Kate Sherwood - Dark Horse 2.3 - Into the Light by Kate Sherwood
Miracle in the Mist by Elizabeth Sinclair
Letting Go (Rock Romance #6) by A.L. Wood