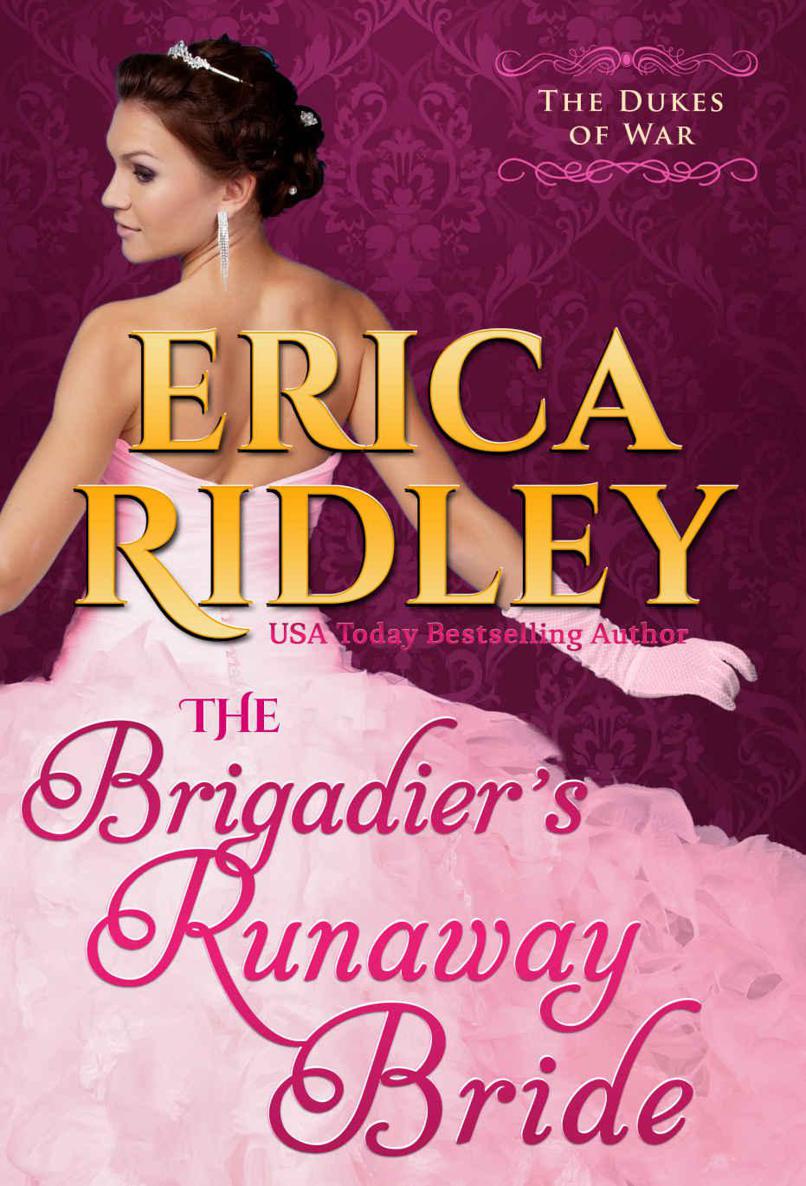 Miss Sarah Fairfax is having a wretched year. Her intended perished at war. His child is in her belly. To secure her future, she resigns herself to a loveless marriage. Just as she’s about to say “
I do
,” her fiancée returns from the grave to crash the wedding... but he’s no longer the charming, carefree man she remembers.

After being left for dead on the battlefield, Brigadier Edmund Blackpool is scarred inside and out. He fights his way home only to discover his intended before the altar with his best friend. He'll be the one to marry her, no matter what she wants! But when his new bride disappears with his child, he must reopen his wounds to win the most important battle of his life.

Did you miss the first book in the series?

Grab
The Viscount’s Christmas Temptation
for free on Kindle
!

Want to be the first to know about new releases?

Sign up at
http://ericaridley.com/club99
for members-only exclusives, including advance notice of pre-orders, as well as contests, giveaways, freebies, and 99¢ deals!

This is a work of fiction. Names, characters, places, and incidents are the product of the author’s imagination or are used fictitiously. Any resemblance to actual events, locales, or persons, living or dead, is purely coincidental.

All rights reserved. Except as permitted under the U.S. Copyright Act of 1976, no part of this publication may be reproduced, distributed, or transmitted in any form or by any means, or stored in a database or retrieval system, without the prior written permission of the author.

Four left for war…
Only three made it home.
At first.

Most women would be delighted to find themselves mere moments away from becoming a duchess.

Miss Sarah Fairfax, as it happened, was not most women.

For one, she stood before a temporary altar in a private alcove of the Duke of Ravenwood’s London estate with her shoulders back, her chin up, and her belly swollen with child.

For two, Ravenwood—the handsome, eligible duke with whom she was about to wed—was not her unborn child’s father.

That had been Edmund Blackpool. The boy whose tousled golden brown locks and dreamy blue eyes had stolen her breath and her heart even when they were children. He was all she’d ever wanted… and would never have. He’d gone off to war three years ago, intending to make the world a better place. After two years of agonizing separation, last June, she had met him in Bruges, mere days before his company had been sent to Waterloo.

A sharp kick jabbed the wall of Sarah’s belly and she smiled to hide a wince of pain. Masking her emotions was all she’d done for the past eight months. Smiling was automatic now. No matter what happened.

Everything traced back to that fateful, impulsive night.

Edmund was no longer plain Mr. Blackpool, but a dashing brigadier with shiny epaulets and matching stars upon his uniform. He was beautiful and passionate and irresistible, and when he’d confessed his wish to marry her if only she’d wait for his return… She was in his arms before he had finished speaking.

He hadn’t made it off the battlefield alive.

Next had come the nausea, the dizziness, the desire to do nothing but sleep… and the realization that depression was not the sole cause. She was beyond ruined. She was
pregnant
. Her child would be born a bastard, and live the rest of his life in ostracized infamy, just like his mother.

Sarah faced the vicar and struggled to keep her breaths even, to not betray the weight of the endless pressure of everyone else’s expectations. Society. Her peers. Her parents. Herself. She was in this position because she’d
expected
to wed Edmund as soon as he returned from war.

Well, now she knew better than to count on expectations. She was in charge of her own fate now. No, make that two fates. Her knuckle traced the curve of her belly. Their future was up to her.

“Lawrence Pembroke, Duke of Ravenwood,” the vicar intoned. “Wilt thou have this woman to be thy wedded wife, to live together after God’s ordinance in the holy estate of matrimony? Wilt thou love her, comfort her, honor and keep her in sickness and in health, and forsaking all others, keep thee only unto her, so long as ye both shall live?”

Sarah’s throat convulsed. This was a nightmare. She touched her palm to her swollen midsection. Was she really going to go through with this? Would Ravenwood?

“I will,” the duke replied before Sarah could interrupt.

If she would have done so.

Her fingers stroked her belly, trying to calm the infant inside. Truth be told, they were moments away from a miracle. The child would be legitimate, not a bastard. Even once Society inevitably did the maths and realized the baby had been conceived long before the ducal wedding, the power of the Ravenwood name would protect them from all but a few whispers.

No one would dare cut them. The baby would be fine.

If the child was a boy, he would inherit a dukedom some day. If the child was a girl, she would be welcomed into Society with open arms. Perhaps marry a duke herself someday. What did it signify if her parents were not in love? If part of Sarah had died on that blood-soaked battlefield alongside her lost lover, did it matter, so long as her child was safe?

The vicar fixed his dark eyes on her. “Miss Sarah Fairfax.”

She swallowed. ’Twas a miracle and a nightmare, this union.

Sarah slid the duke a furtive glance. She’d never wished to be a duchess. She’d just wanted Edmund. And now the only way to save her baby’s future was to raise his baby as someone else’s child. Someone who wasn’t doing this for her—or for the baby.

Ravenwood was sacrificing himself at the altar for Edmund. Because for all their lives, they had been the best of friends.

Because Ravenwood hadn’t been there that day to save him.

The vicar stared at Sarah. “Wilt thou have this man to be thy wedded husband, to live together after God’s ordinance in the holy estate of matrimony? Wilt thou obey him, and serve him, love honor and keep him in sickness and in health, and forsaking all others, keep thee solely unto him, so long as ye both shall live?”

Love him? Forsaking all others? She froze, her lungs suddenly incapable of breath. Her gaze flicked over her shoulder, toward the few souls in attendance.

She hadn’t been the only one who had lost Edmund. His twin brother Bartholomew stood at the back of the alcove, his face unreadable. Her stomach twisted. Did he hate her for marrying Ravenwood? For depriving him of a niece or nephew he could claim as his own blood? For being a distraction to Edmund? She turned back to the vicar before her eyes could sting with tears. Crying wouldn’t change the past.

The future was her sole concern.

It didn’t matter what anyone thought. Not Bartholomew, not her parents, not even the vicar. All that mattered was the baby. She would be the best mother in the history of mothers. There was nothing she wouldn’t do to provide for her child. Marrying a man she did not love was the best option.

She set her jaw. As bad as things were, she and the baby were devilish fortunate. Despite so many tragedies—or, perhaps,
because
of them—her child would have a better future than Sarah would ever have dreamed. She would ensure her child never felt unloved or unwanted for a single moment.

Sarah lifted her gaze toward the vicar. “I will.”

The vicar nodded. “I require and charge you both, as ye will answer at the dreadful day of judgment when the secrets of all hearts shall be disclosed, that if either of you know any impediment why ye may not be lawfully joined together in matrimony, ye do now confess it.”

The alcove was still.

In the ensuing silence, Sarah was suddenly aware of a dozen tiny sounds. The vicar’s finger, smoothing a crinkled page. The slight change in Ravenwood’s breath, as if he, too, felt the weight of the future upon them. A shuffle in the rear of the alcove as Bartholomew shifted his prosthesis. Or perhaps that movement was the Earl of Carlisle, who had been stone still throughout the entire ceremony.