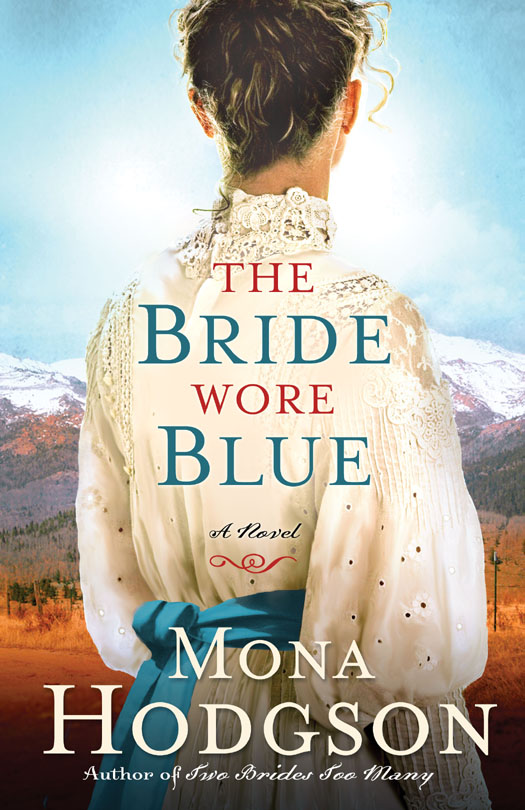 Other Books by Mona Hodgson

Two Brides Too Many
Too Rich for a Bride

All Scripture quotations or paraphrases are taken from the King James Version.

This is a work of fiction. Apart from well-known people, events, and locales that figure into the narrative, all names, characters, places, and incidents are the products of the author’s imagination or are used fictitiously.

All rights reserved. No part of this book may be reproduced or transmitted in any form or by any means, electronic or mechanical, including photocopying and recording, or by any information storage and retrieval system, without permission in writing from the publisher.

Published in the United States by WaterBrook Multnomah, an imprint of the Crown Publishing Group, a division of Random House Inc., New York.

W
ATER
B
ROOK
and its deer colophon are registered trademarks of Random House Inc.

The Cataloging in Publication data is on file with the Library of Congress.

For my mother, Stella June Shindlebower Gansberg, and her sisters, my Aunt Marion, Aunt Pauline, Aunt Alma, and Aunt Nellie

Excerpt from
Twice a Bride

Excerpt from
Dandelion on the Wind

Therefore being justified by faith, we have peace with God through our Lord Jesus Christ: by whom also we have access by faith into this grace wherein we stand, and rejoice in hope of the glory of God
.

S
ee that man over there?”

Vivian had no trouble hearing Aunt Alma over the
clickety-clack
of the train wheels. She poised her pencil over her sketch pad and followed her aunt’s gaze to the man who slouched in the seat two rows ahead of them.

“He’s been chewing and spitting most all the way from Colorado Springs.” Aunt Alma, Vivian’s chaperone, shook her head, causing the penny-colored braid encircling it to rock back and forth. “That’s the kind of man you need to watch out for,” she said. “You’re not in Maine anymore, child.”

The label stung Vivian’s ears. Why did everyone think of her as a child? It didn’t help that she was four or five inches shorter than all three of her sisters. Straightening, she pressed her back against the seat. “I’m not a child. Aunt Alma, I hardly think one can determine which man to watch out for by what he wears or how he looks.”

Nothing in Gregory’s debonair style of dressing indicated he was a cad.

“You can’t be so trusting of men out here in the West. They’re, well …” Blushing, her aunt cupped her mouth with a gloved hand. “They’re quite lonely.”

Vivian tugged the sleeves straight on her percale travel dress. She might be the baby in her family, but she wasn’t a child. She’d lost her mother before she’d lost her first tooth. Her father had left home before she did. So had her sisters, Kat and Nell first and then Ida.

Plus she’d had to leave Sassy in Maine. Her poor cat didn’t understand being left behind any more than Vivian did. And her familiarity with growing up too fast had to remain her secret.

Moving to Cripple Creek hadn’t been her choice. But any plans for a future with Gregory were history, and Father had made it clear as rainwater in his last letter that she wasn’t welcome to join him in France. Even New York’s latest fashions couldn’t measure up to the costume prowess of Paris. There she would have had the opportunity to secure her future as a fashion designer.

But instead Father insisted she reunite with her sisters in Colorado. That would have suited her fine before Gregory. At least the move to Cripple Creek ushered her away from Portland, if not her past. She did miss her sisters and wanted to see them, but she couldn’t bear the thought of them seeing her for what she was.

She returned her attention to the opera gown she’d been sketching. Too much flouncing at the waist. She pulled a pink eraser from her reticule and brushed away the last lines she’d drawn. If only mistakes in life were that easy to erase.

Vivian drew in a fortifying breath. She had to hope her new home could offer her the fresh start she needed. Nell had written more than once about the wondrous growth taking place in Cripple Creek. While an opera house or two did not a thriving metropolis make, perhaps the
move to Colorado wouldn’t be as bleak as she had expected. Surely the town was big enough now to host a clothing designer who would value Vivian’s eastern fashion sense.

“I’m sorry if I upset you.” Her aunt punctuated her whisper with a frown.

Vivian dropped the eraser into her bag. It wasn’t Aunt Alma’s fault her youngest niece wasn’t lovable enough to make anyone want to stay with her. “You needn’t worry about me, Aunt Alma.”

Aunt Alma patted Vivian’s knee. “But you know I do.”

Vivian offered her aunt the best smile she could rally. Would her prim and proper aunt care so much if she knew the truth? But she couldn’t know. Neither could her sisters. Enough had changed for Vivian already, and she couldn’t bear the blame she deserved. Especially if it meant seeing her guilt reflected back to her in the virtuous eyes of her sisters.

While the train’s steel wheels screeched and howled, slowing it down for what Vivian hoped was its final descent, her mind stalled on thoughts of her sisters. Ida would be so relieved things didn’t work out with Gregory that she probably wouldn’t even mention him. Nell would want to match her up with a suitable beau. When she just wanted to forget.

A sharp clanging noise drew their attention to the glass-paned door at the back of the train car. Vivian twisted in her narrow seat in time to watch two men dash up the aisle toward her, their faces covered by bandannas. Both wore soiled dusters. The shorter man in front clutched a large metal box. The man behind him ran bent but still nearly brushed the hanging lights with his straw hat. He wielded a pistol.

“Bandits!” Vivian wanted to turn away from them and slide to the floorboard, but her legs refused to move.

“Remain calm.” The bandit carrying the box sounded as if his mouth harbored marbles. “Everybody mind your own business, and nobody’ll get hurt.”

Vivian intended to do just that, but Aunt Alma’s arms encircled her, knocking her off balance. Her sketch pad and pencil fell to the floorboard. She had no idea her foot lay in the aisle until the first man tripped on it.

He lunged forward, snarling as the box crashed into the seat two rows ahead of her, narrowly missing the shoulder of the kind of man she needed to watch out for. The hem of the bandit’s coat snagged on the arm of the seat, revealing a large belt buckle at his waist. Quickly regaining his composure, he turned and glared at Vivian over the filthy blue bandanna tied across his mouth and nose that did little to mask the pungent scent of licorice-root candy.

Vivian clasped her trembling hands and swallowed hard against the lump forming in her throat. “I’m sorry.”

“You tryin’ to be a hero, are you?” His beady eyes narrowed. “Think you’re smarter than us?”

Before Vivian could manage a response, the conductor charged through the door, carrying a shotgun. “Stop those thieves!”

When men in the back of the car began to stand, the taller bandit waved his gun, and the shorter man jerked open the door at the front of the car. He tossed the metal box into the passing brush, and both men jumped from the train. The conductor stopped just short of leaping off the train himself. Vivian watched out the window as the two bandits tumbled down a hill, then disappeared into the scrub and short trees.

The conductor retrieved his shiny black cap from the floor and straightened his vest. His forehead sported a lump the color of a pomegranate. “The danger has passed, folks, and we’ll arrive at the Cripple
Creek station shortly.” He traced the curls on either end of his thin mustache. “Please do all you can to remember what you’ve seen and heard, so the law can bring these criminals to justice.”

Banana Split by Josi S. Kilpack
Allegiance by Trevor Corbett
STEPBROTHER Love 1 by Scarlet, I.
The Malhotra Bride by Sundari Venkatraman
Kiss of Venom by Estep, Jennifer
Levels of Life by Julian Barnes
Storm in a Teacup by Emmie Mears
Hornet's Nest by Jaycee Ford
The Ghost Bride by Yangsze Choo
Heart of the City by Ariel Sabar